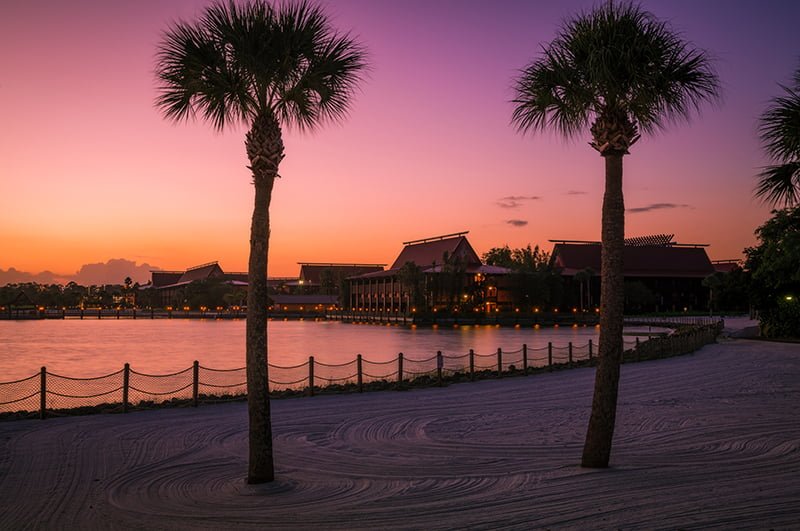 Walt Disney World has shared a sneak peek at the newly reimagined guest rooms at Polynesian Village Resort. In this post, we’ll take a look at photos of the “Moana Makeover,” plus share a brief update on construction, and offer first impressions on how these compare to other refurbished rooms in WDW hotels.

Let’s start by quickly recapping what’s happening with Disney’s Polynesian Village Resort. Originally scheduled to reopen on October 4 of last year, Walt Disney World announced a last-minute Moana-Inspired Refurbishment Pushing Back Polynesian’s Reopening. This would feature a makeover to guest rooms and enhancements to the Great Ceremonial House that would keep the hotel closed until Summer 2021.

Details were vague at the time, but a couple of weeks later, Walt Disney Imagineering released concept art for a new porte-cochère and clarified that the Great Ceremonial House would remain open, but that the monorail station would close. Officially, that’s where things have stood since then, with this preview of the new Moana rooms being the first update from Walt Disney World in months…

We’ve visited the Polynesian several times since reopening. In case you haven’t been keeping track of this project, only the hotel side of the Polynesian is closed. Meaning that the longhouses with regular hotel rooms are the ones receiving this Moana-inspired makeover. Great Ceremonial House (minus the monorail, ‘Ohana, and Trader Sam’s) is still open, as are the Deluxe Villas and Bungalows.

Disney Vacation Club members can still book that ‘side’ of the Poly, which encompasses the Pago Pago, Tokelau, and Moorea Longhouses plus the Bora Bora Bungalows. The DVC rooms will receive a separate soft goods refurbishment this year, which is occurring one year ahead of schedule. That could be to coincide with this project, or because the DVC rooms are looking a bit worse for wear. Regardless, there’s no concept art or info for the refreshed Disney Vacation Club rooms, or any indication as to whether they’ll receive Moana artwork.

This can be a bit confusing, especially since Disney Vacation Club rooms can also be booked by regular guests. Basically, the Poly is open, albeit with a significantly reduced room inventory, no monorail, no ‘Ohana or Trader Sam’s, and lots of construction walls. Hope that makes sense, but regardless, let’s take a look at the new Moana rooms… 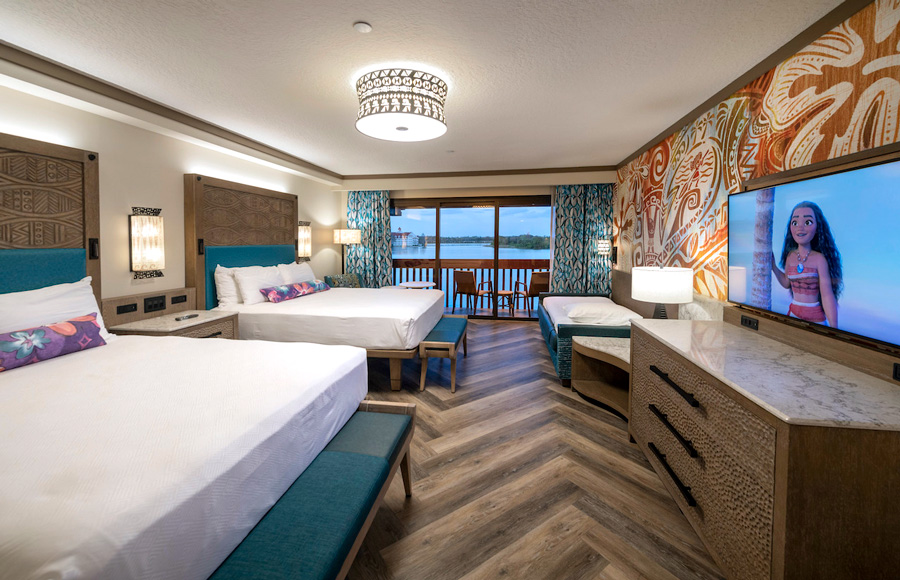 These reimagined guest rooms at Disney’s Polynesian Village Resort feature a new color palette inspired by the Pacific Ocean and its many islands.

This includes details, patterns and textures from the Walt Disney Animation Studios hit, Moana. Of course, there are even some hidden (and not-so-hidden) characters from the film. 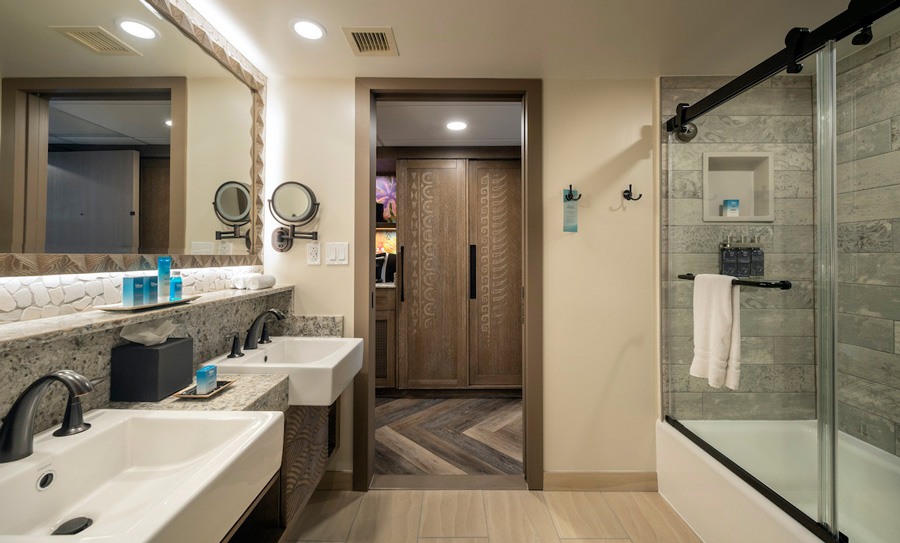 In the bathrooms, Imagineers took inspiration from the sandy ocean floor for the tiles and carved details in the vanity. The colorful patterns found throughout the room bring a whole new energy to the space, evoking undulating ocean waves and tropical flowers. 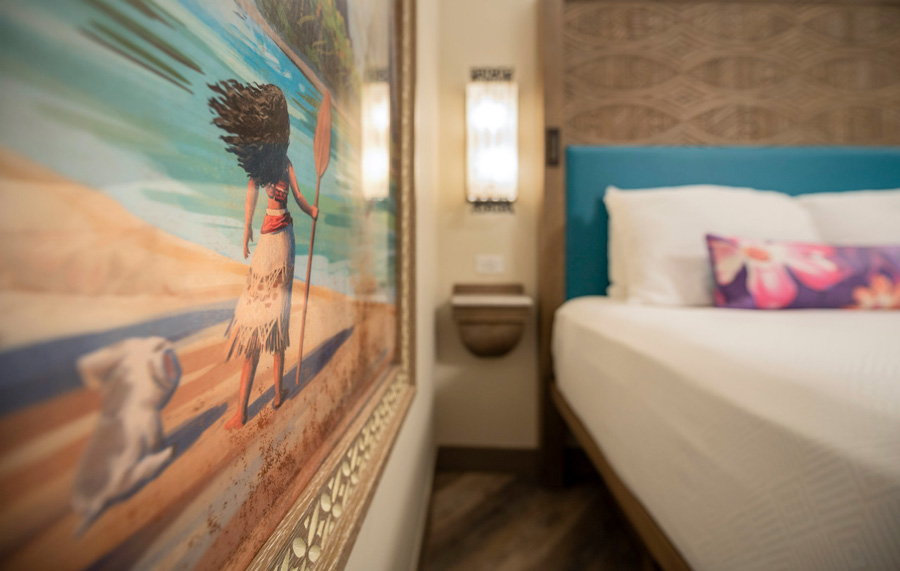 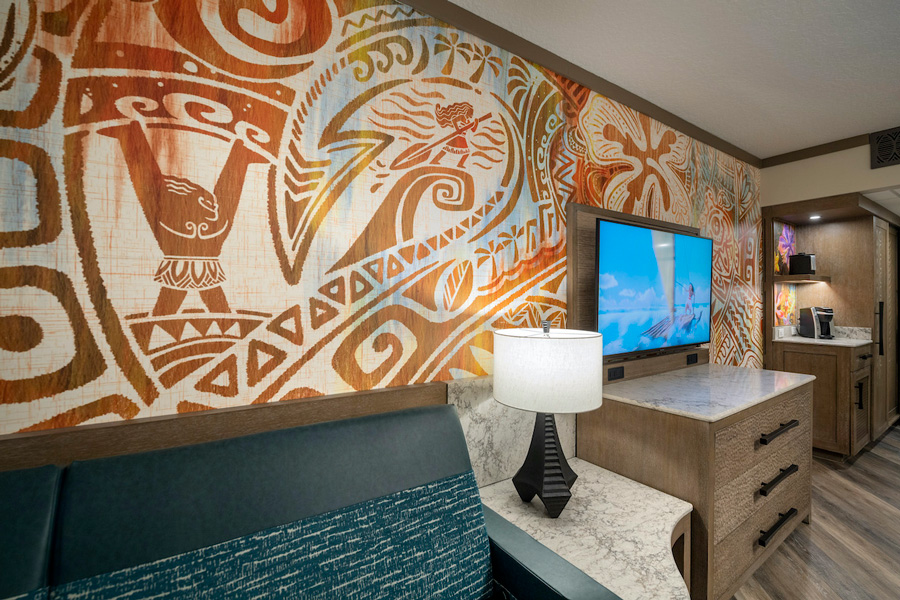 We’ll withhold final judgment until completing an actual stay, but our first impression of the new Moana-inspired rooms at Disney’s Polynesian Village Resort is very positive.

In the past, the Poly’s rooms have been visually busy and cluttered. These new rooms manage to balance an array of colors and textures without ever looking garish. That’s especially impressive given the wall pattern, which appears to borrow from Maui’s tattoos. Feature walls are very on-trend in the hotel industry, and we think it works well here. It’s clearly and prominently Moana-inspired, but also looks good and cool on its own, divorced of Moana context or knowledge. 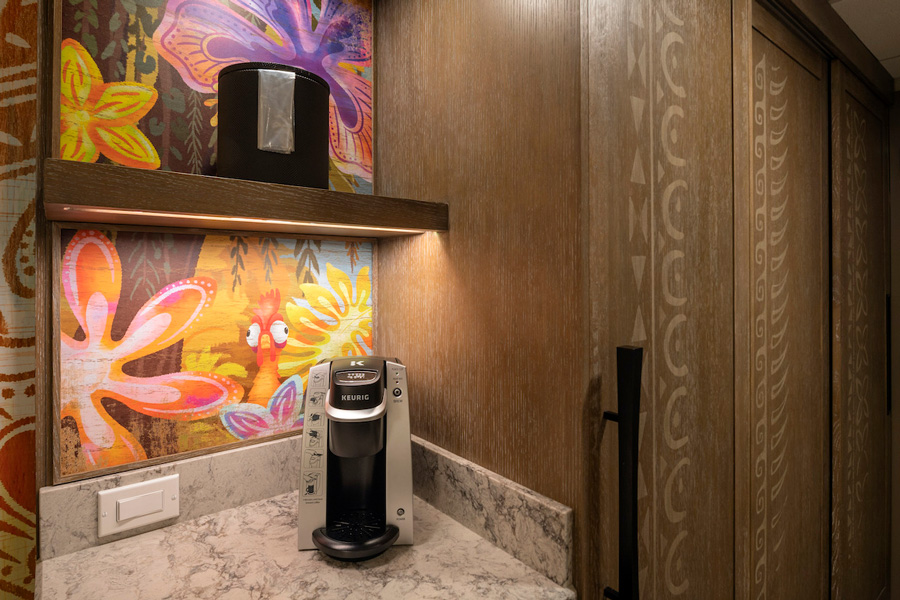 Beyond that, the interior design is generally low-key, but offers subtle sophistication, clever and engaging uses of texture, an abundance of clean lines, and upgraded finishings throughout.

From the herringbone plank flooring to the lighting and furniture, the features have been plussed in a variety of ways. It all feels custom-made for Disney’s Polynesian Village Resort, rather than being off-the-shelf furniture and styles that could be found at any hotel in the country. 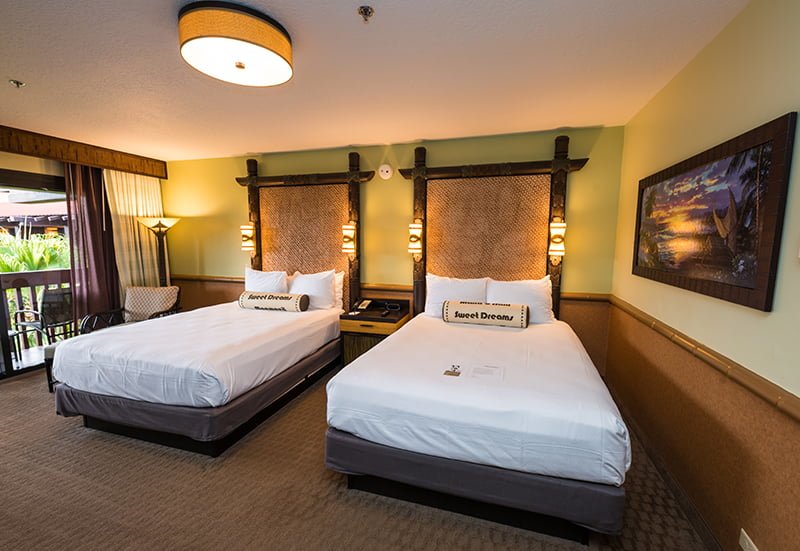 For the sake of comparison, above is our most recent photo of the Poly’s previous rooms. As with just about anything Imagineering does that infuses intellectual property in old-school Walt Disney World “stuff,” this is bound to be controversial among fans. That’s simply the nature of the beast.

Our view is that these newly-reimagined rooms strike a perfect balance of luxury, themed design, and Disney characters. They look well-appointed but also something you’d find in the islands, and if you had zero knowledge of the movie Moana, you wouldn’t question the artwork choices. It all coalesces surprisingly well, with nothing feeling forced or out of place. 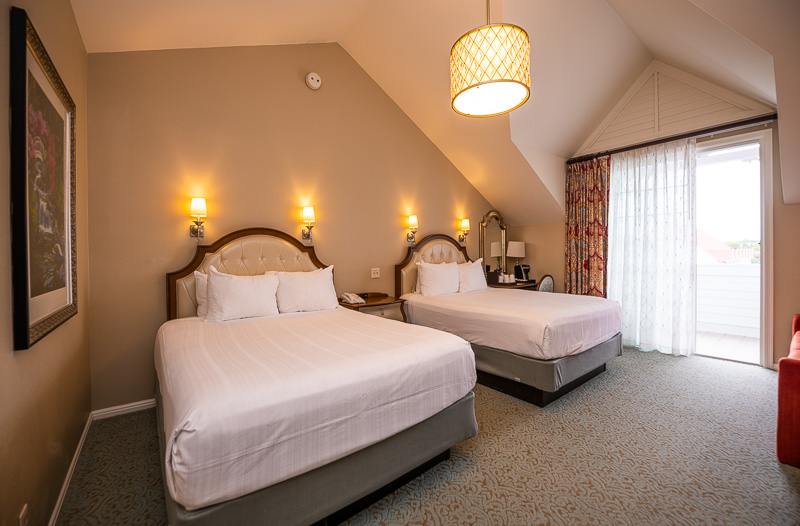 Above is a photo of the current rooms at Disney’s Grand Floridian Resort & Spa, which we panned earlier this week in our latest Resort Stay Report: Weak Rooms at Walt Disney World’s Flagship Resort. In that, we suggested more overt thematic flourishes (and even specifically-themed character rooms) to distinguish these rooms from a garden-variety Marriott or Hilton. To our surprise, the vast majority of readers agreed with us. (So perhaps our take on the new Poly rooms won’t be that controversial?)

Without question, the new Moana-inspired rooms at the Polynesian are an upgrade over these Grand Floridian rooms. I honestly don’t think there’s even any comparison. (Honestly, the old rooms at the Poly were also nicer…as were the rooms there one generation before that!) 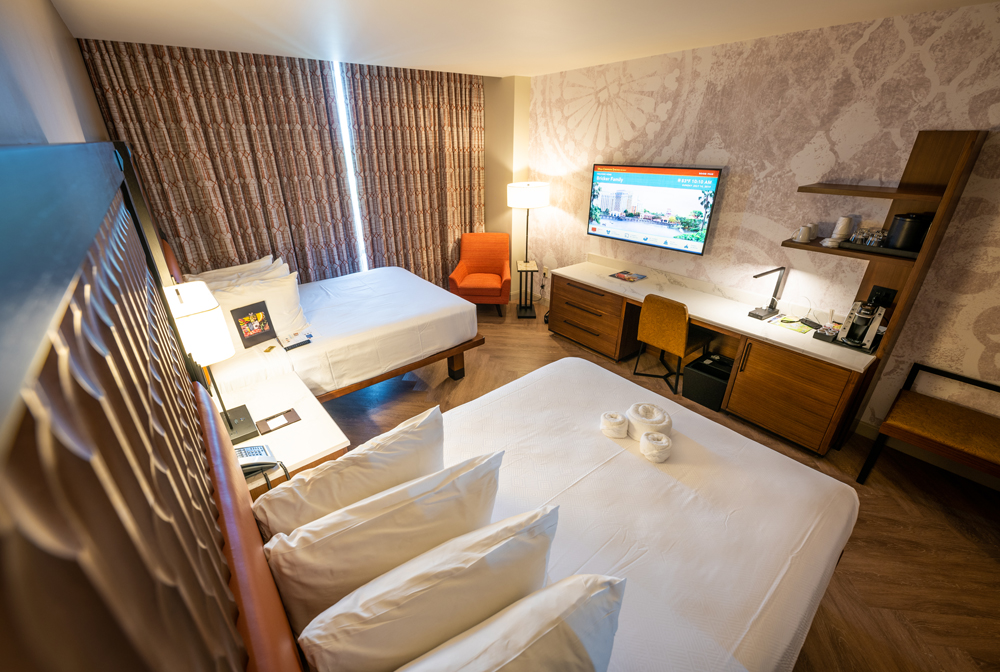 We love Gran Destino Tower and think it’s one of the best bang-for-buck options among all Walt Disney World hotels. However, that comparison makes about as much sense as contrasting the price disparity of houses in Malibu to those in Milwaukee. No disrespect to Milwaukee–it’s a great city–but I think we all understand why Malibu is more expensive. Whether it’s proximity to and views of the Pacific Ocean or Cinderella Castle, the first three rules of real estate are location. 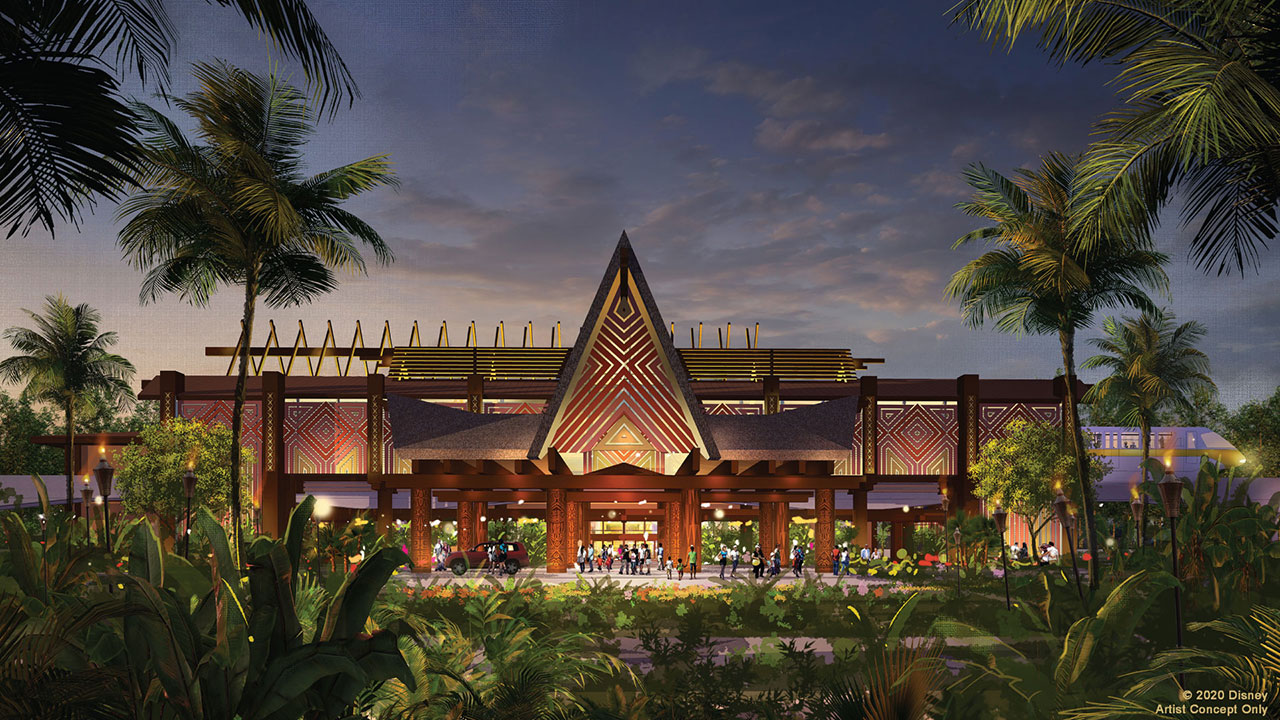 Walt Disney World still has not released an official reopening date for the Polynesian Village Resort. It was once booking beginning in early July 2021, but that’s now been pushed back to late July 2021. Our expectation is that date will hold, but there’s still a decent amount of work to be done around the Great Ceremonial House.

Speaking of which, the porte cochere is in the midst of a dramatic overhaul that will feature a high-pitched, open-truss roof covered in a thatch style with pops of color. The Monorail station is receiving new wooden screens with tropical colors, adding to the open and airy vibe befitting of the South Seas. Above is concept art, below is current construction progress. 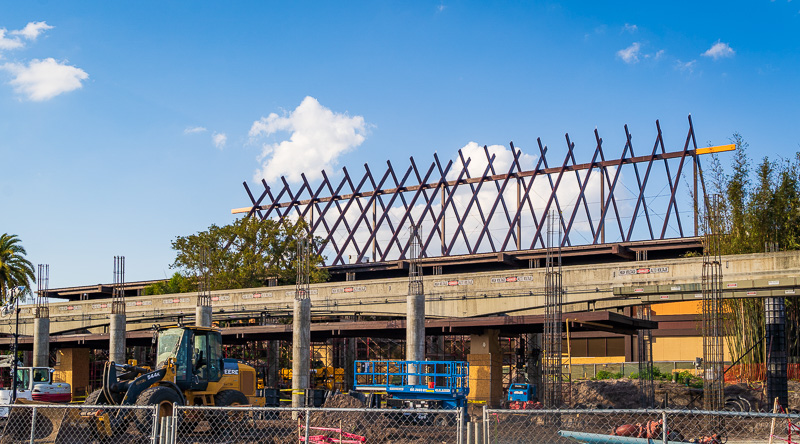 Also included in the sneak peek of the Moana rooms at Disney’s Polynesian Village Resort was a teaser of more such updates in the weeks and months to come. Per Walt Disney World, this is “part of the overall evolution of our Disney Resort hotels, as we infuse even more Disney touches across our collection” just in time for the World’s Most Magical Celebration, beginning October 1, 2021, in honor of Walt Disney World’s 50th anniversary.

Our guess is that the next update will concern Disney’s Contemporary Resort, which is taking most of its rooms in the A-Frame out of commission next month. Two years ago, Imagineering tested new rooms inspired by the Incredibles at that resort. It’s possible we’ll see something similar at that resort with that IP, or maybe Walt Disney World will go a different direction. We’re also still holding out hope on a Grand Floridian refresh. Now is the perfect time with occupancy rates low during the phased reopening! We’ll keep you posted as to what happens next.

What are your thoughts on the Moana-inspired rooms at Disney’s Polynesian Village Resort? Think this is a tasteful melding of luxury, themed design, and Disney characters? Concerned about the IP invasion at Walt Disney World? Are these better or worse than the Grand Floridian rooms? Think these rooms help justify Polynesian’s price-point, or is it still too expensive? Do you have any questions about the current resort experience at Walt Disney World? Will you be attempting to visit Walt Disney World this summer or fall, or are you waiting until 2022 or beyond? Any questions we can help you answer? Hearing your feedback–even when you disagree with us–is both interesting to us and helpful to other readers, so please share your thoughts below in the comments!