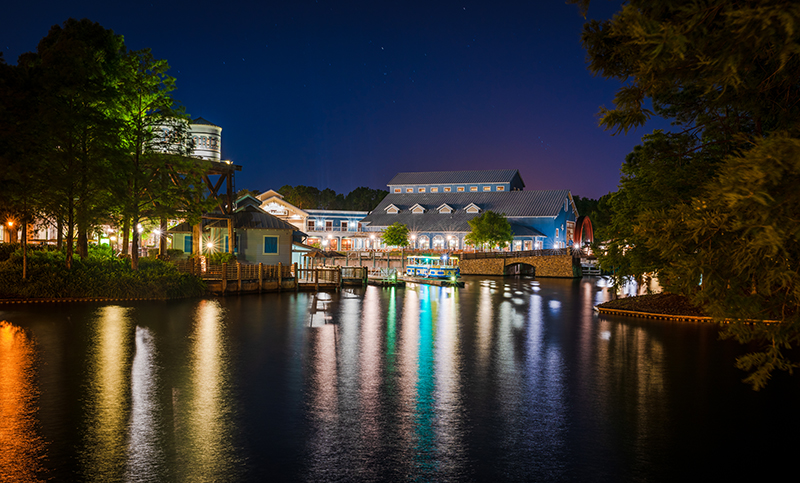 Port Orleans Riverside has (slowly) renovated its rooms, with a new look inspired by the Princess and the Frog. In this post, we’ll share photos and thoughts on the updated Walt Disney World hotel rooms, which are similar to the refreshed rooms at Port Orleans French Quarter. (Updated September 6, 2021.)

At this time, both Port Orleans Riverside and French Quarter remain closed, despite Walt Disney World having reopened over a year ago. These two sister resorts will be among the last hotels to come back, with returns currently scheduled two weeks apart in October 2021. However, these dates are subject to change–other hotels have had theirs pushed back–so see our 2021 Hotel Reopening Dates at Walt Disney World for the latest updates.

When Port Orleans Resort – Riverside reopens, the room refurbishment project covered here should be totally finished. It was over 90% done when the hotel closed last March, and it’s our understanding that the remaining work has since been completed. In addition to the new rooms you see here, this also means that the Royal Rooms have likely been remodeled. We’ll be staying at Riverside on reopening night, and will have a full report, plus photos & videos. For now, here’s what you need to know about the new-look rooms…

In case you’re unfamiliar with the project at Port Orleans Resort – Riverside, it’s a soft goods refurbishment. This is more like an ‘aesthetic refresh’ than the wholesale room redesigns (hard goods refurbishments) that have been occurring elsewhere around Walt Disney World, probably most notably with the new room at Pop Century and at All Star Movies.

Soft goods refurbishments occur between hard goods refurbishments to extend the life of a particular room design, and to give them a fresh look that takes advantage of industry trends and innovations in design. At Walt Disney World, this has been utilized quite effectively to better utilize space. While we may quibble over the thematic changes, I think we can all agree that Disney has done a good job of increasing storage space and making rooms feel more spacious. 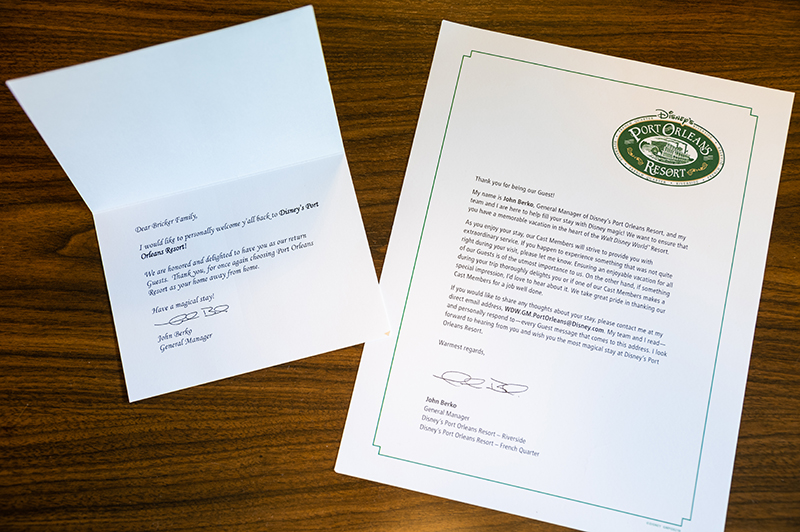 Last year, Walt Disney World started leaving form letters from the hotel manager soliciting guest feedback, which is standard operating procedure across all resorts. Hotel managers and their staff actually read these emails and act on them.

This year, for the first time at Port Orleans Riverside, a Cast Member knocked on our door and gave us a “thank you” card for being repeat guests at the hotel. This is the first we’ve received this card, so I’m going to guess it’s either a very new program or we were “missed” on our last couple of stays this spring. While walking around, we saw that same Cast Member with a stack of them.

This is a nice touch, especially given that one of our main complaints about Walt Disney World hotels has been that the level of service doesn’t hold a candle to real-world counterparts. There are several more steps that could be taken in the right direction, with having the in-room phone actually routing calls to the front desk (rather than a call center, as is currently the case) being high on my list. 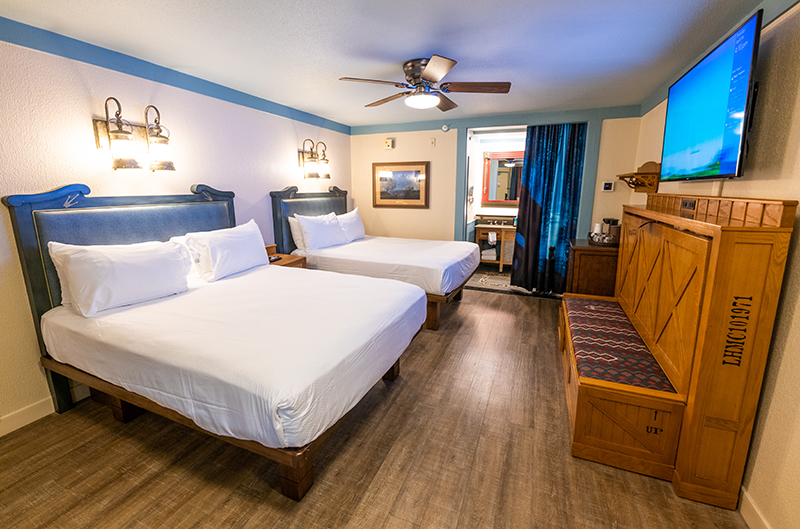 As for the refurbished rooms, these are definitely not as significant as other recent changes around Walt Disney World resorts, which is probably for the best. 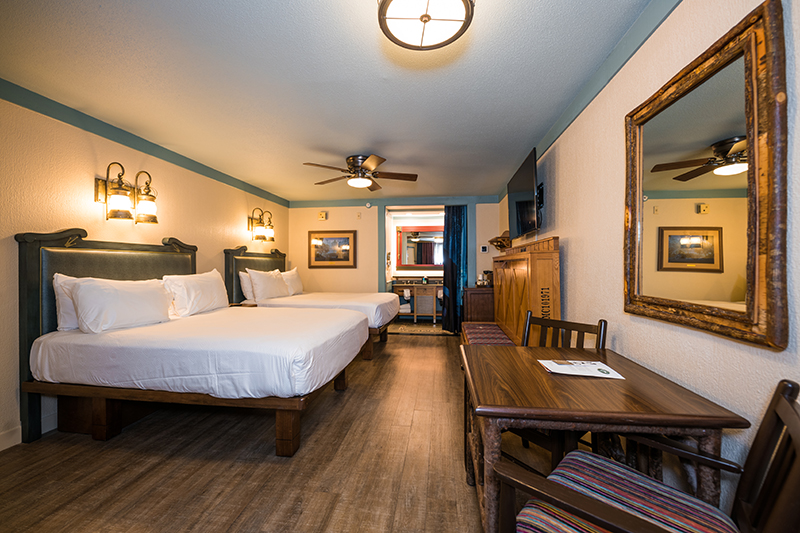 The biggest changes to the Alligator Bayou rooms are the carpet being replaced by hard wood flooring, rustic woodwork replaced, larger television, and elevated bed frame for luggage storage.

We know some of you prefer carpet, but we don’t. This looks classier and will be easier to clean. We’ve had no issues with the floor being noisier in these rooms, but your mileage may vary on that. 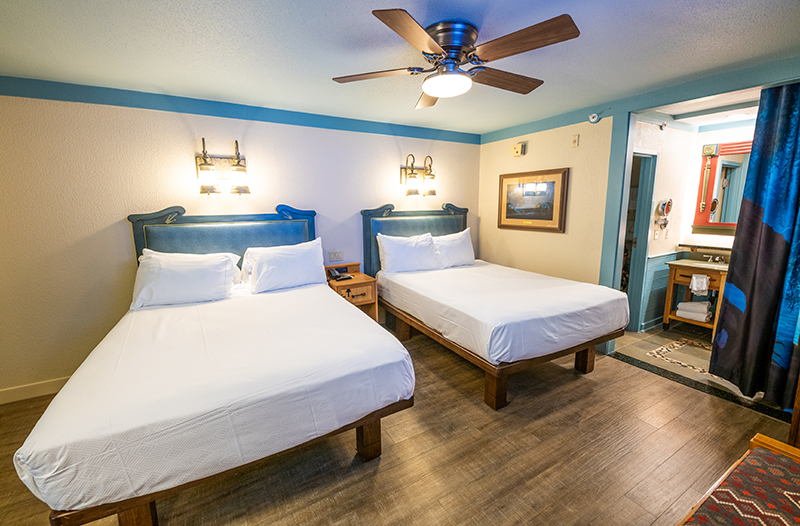 The beds are also now elevated and on wood frames, with space for luggage storage underneath. In the cramped Moderate and Value Resorts, this is a big win. I’m also pretty confident that the mattresses in these rooms are new–and they’re spectacular.

Elsewhere in the room, the chairs have been reupholstered, and there are new blinds. Nothing revolutionary, and the new designs freshen things up. No comment on the lack of bed runners–you all already know where I stand on that. 😉 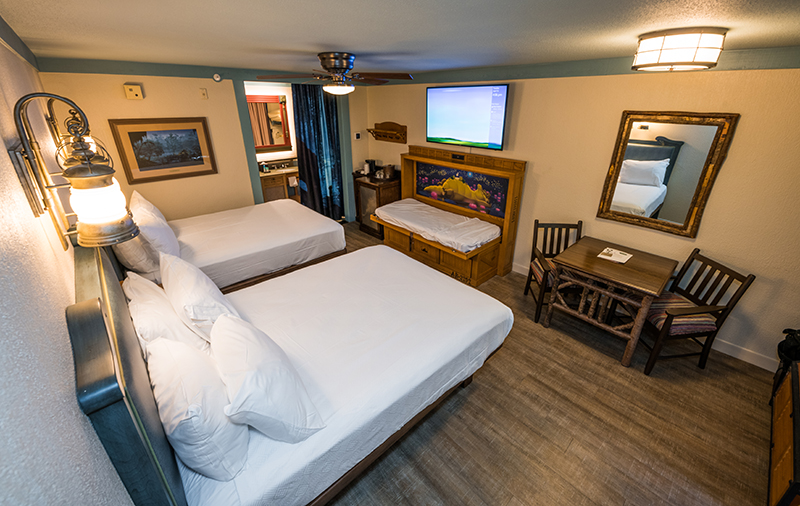 One thing I personally don’t like about the new rooms is the natural wood being replaced in the headboards and trim. (The frame around the bathroom mirror was also changed, but I’ll let that go because it’s a functional improvement.) 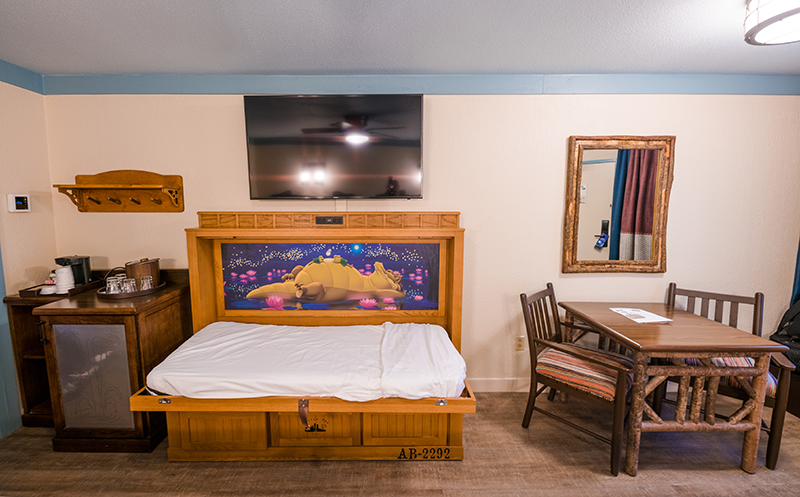 Why is this turquoise accenting necessary? It stands out from the rest of the room, and not in a good way.

One explanation I’ve heard for this is that Disney was receiving lower guest satisfaction scores for Alligator Bayou than Magnolia Bend, and one of the primary complaints was that the rooms were “too rustic.” I don’t agree with the complaint, but it doesn’t surprise me, either. 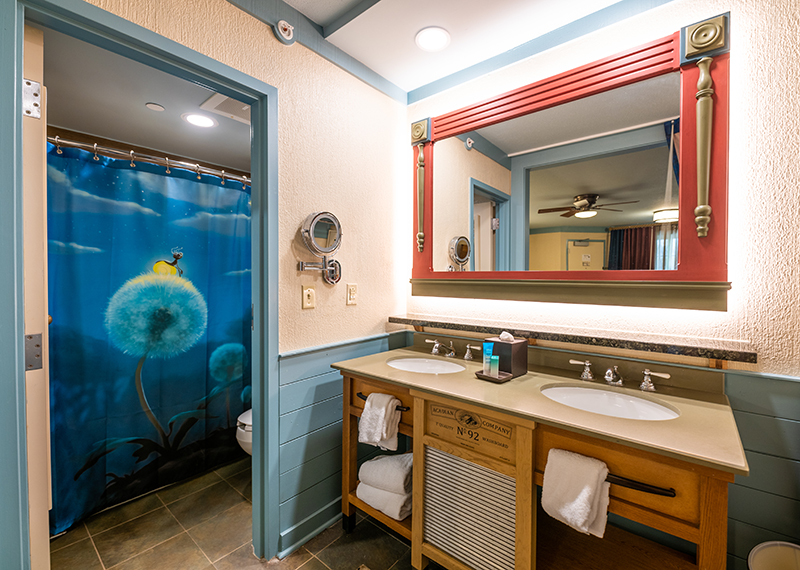 More turquoise in the bathroom, but at least the backlit mirror is nice.

Of course, there are also now soap dispensers attached to the wall in the shower. 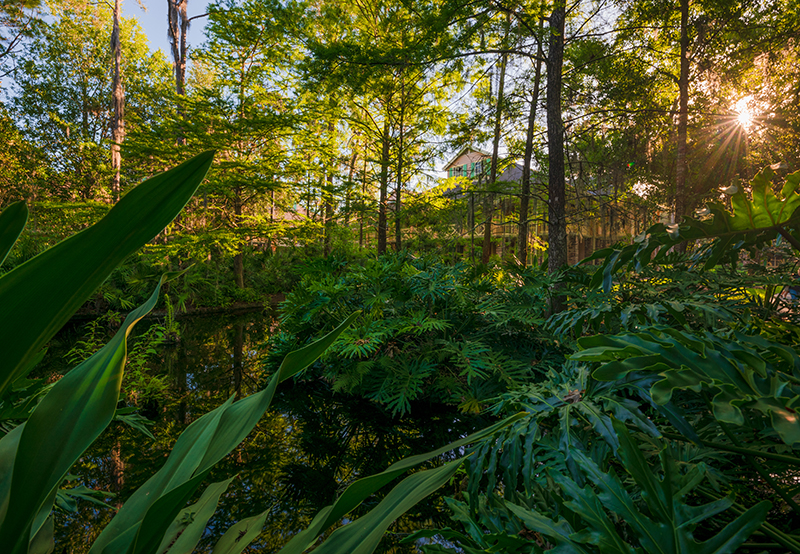 As for whether you should avoid Alligator Bayou during the refurbishments, we don’t believe that’s necessary. These buildings are fairly compact, and the work is being done with the entire building completely closed.

There is no major external work, so it should not be disrupting if you’re in adjacent buildings. Plus, the buildings in Alligator Bayou are often separated from one another by water and dense foliage (see above), so you probably won’t even notice the work is occurring unless you actively go looking for it.

Here’s a video of the new Port Orleans Riverside rooms that Sarah shot:

Overall, we were mostly just glad to be back at Port Orleans Riverside. I forgot how much I love this resort, and wandering around the resort’s grounds at sunset, night, and evening is so enjoyable. It’s such a charming and romantic resort, with beautiful and varied horticulture. (Once I get a chance to cull and edit my 2,000+ sunrise/sunset/night photos, I’ll have to do a follow-up post!)

In the end, these refurbished rooms at Riverside are not huge changes a la Pop Century. The rooms were not gutted, and most furnishings carry over from the previous design. From a functional perspective, our impression of the room was positive. From a thematic one, we’re mixed. Toning down the rustic design was unnecessary, but we love to see Princess and the Frog, one of Disney’s most underrated animated films, highlighted in these rooms. If you were a fan of the Alligator Bayou rooms at Port Orleans Riverside before, you’ll probably still be a fan. If you weren’t a fan…well, everyone is entitled to be wrong if they so choose. 😉

Do you agree or disagree with our take on the refreshed rooms at Port Orleans Riverside? Are you a fan of this resort, or do you prefer the more compact resorts? Any features of the redesign that you like or dislike? Are bed runners a hill worth dying on? Any questions we can help you answer? Hearing your feedback–even when you disagree with us–is both interesting to us and helpful to other readers, so please share your thoughts below in the comments!