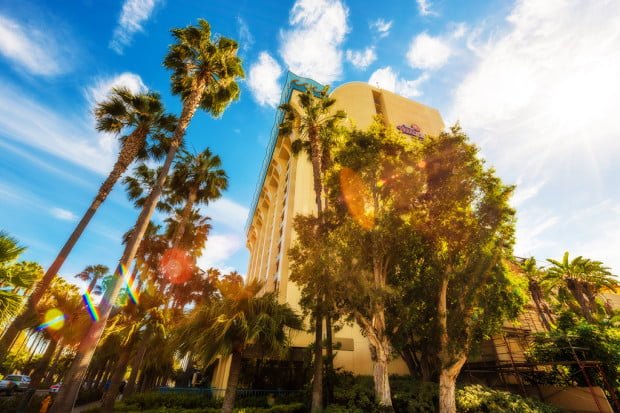 Paradise Pier Hotel is an official Disney hotel at Disneyland Resort with a 4-star rating, themed to a beachside boardwalk of the 1920s. It’s typically the least-expensive of the three official Disneyland Resort hotels, but it’s also the farthest from the park, and offers the least in terms of style and amenities. This review features photos of the Paradise Pier Hotel guest rooms and common areas, plus my thoughts on the hotel, and whether I’d recommend it.

Some people are fans of Paradise Pier Hotel. I am not one of those people. In fact, I honestly figured we’d never have a review of the hotel because I refused to pay anywhere near rack rate at this hotel and the type of insane deal necessary to convince me to stay here seemed unlikely. By stroke of luck, a family member of ours happened to get bumped from Disneyland Hotel for a recent convention and ended up at Paradise Pier Hotel, so we joined her for part of the stay. Hence this review.

The good news is that the experience at Paradise Pier Hotel was better than I expected. The bad news is that my expectations were incredibly low, and I still don’t recommend the place. It’s a nice-enough hotel, but it simply doesn’t offer good value.

Why is my opinion of Paradise Pier Hotel low? Well…how much time do you have? 😉 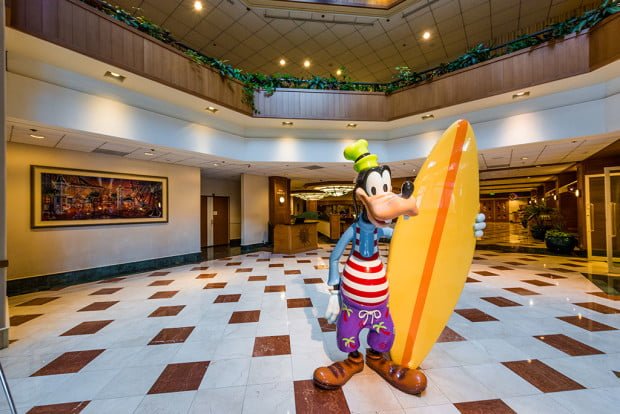 For starters, Disney’s Paradise Pier Hotel is farther from Disneyland and Disney California Adventure than at least a half-dozen hotels located on Harbor Boulevard. Right off the bat, this removes any “convenience” advantage you might assume of a Disney hotel. If Paradise Pier Hotel still had the private entry into Paradise Pier, that alone would probably negate some of my complaints.

Speaking of it being a Disney hotel, it barely is. Up until it was purchased by Disney in the mid-1990s, it was actually operated by a third party, just like any ole ordinary off-site hotel in the Anaheim Resort District. As the Los Angeles Times reported at the time, rates would jump from $85 to $125 just by virtue of association with Disney. 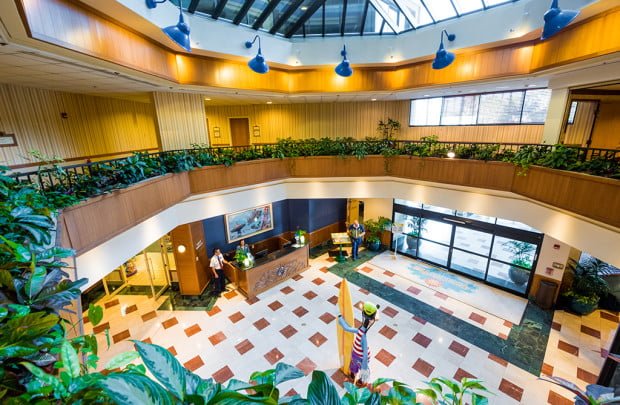 Therein lies the crux of the problem for me: Paradise Pier is an off-site hotel masquerading as a Disney hotel. Yes, the Disney name is on the marquee, and there is a minimal amount of theming.

At its core, Paradise Pier Hotel feels no different than one of the nicer Good Neighbor Hotels near Disneyland, except at a much higher price point. Essentially, you are paying a premium for that “Disney’s” in front of the name, and that premium is a costly one. 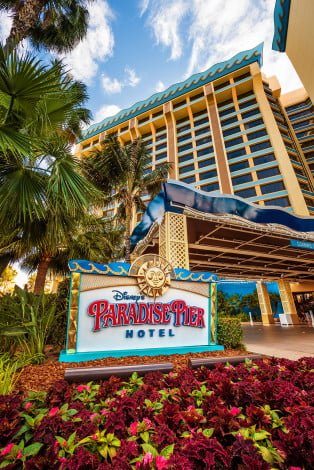 For a standard view room, rates at Paradise Pier Hotel start at $259 (before tax) and quickly go above the $300/night mark. By contrast, a hotel of comparable quality in the area costs about $175/night. That’s what I’m guessing the rates would be if Pan Pacific still owned the hotel, and given the location, amenities, and room quality, I think that’s about a fair price.

That’s my big problem with the hotel. Price removed from the equation, it’s an okay little hotel, and I do enjoy the pier-side vibe and the art (including concept art for versions of Paradise Pier that never came to fruition) throughout the hotel. However, when thinking about price, I can’t help but think that you could pay a little more for the wonderful Disneyland Hotel, a lot more for the grandiose, flagship Grand Californian, or less for a comparable Good Neighbor Hotel. I just don’t see where Paradise Pier Hotel “fits” in terms of what it offers versus what it costs. 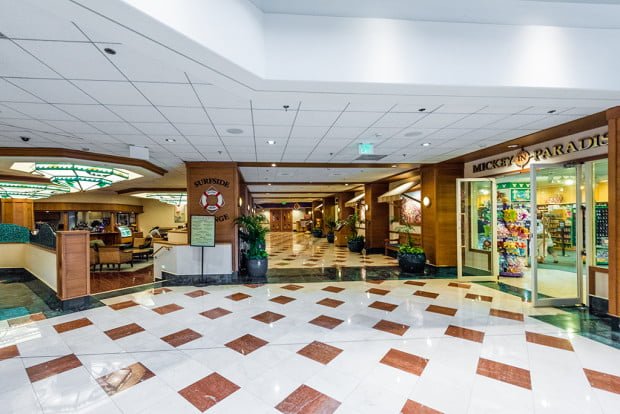 I’d hazard a guess that 95% of hotels near Disneyland are nicer now than they were in 1995. If Pan Pacific’s only other hotel in the United States, the Pan Pacific Seattle, is any indication, the hotel would be as well–or better–off had it remained under Pan Pacific ownership. 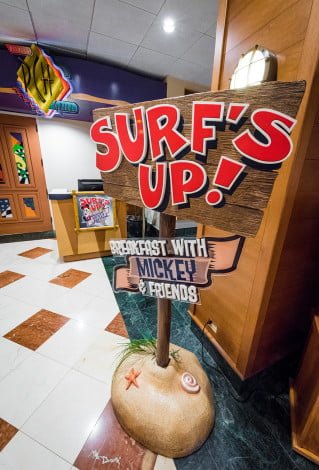 This is where my other major issue with the Paradise Pier Hotel lies. The hotel is charging premium prices, yet it still retains the feel of Disney California Adventure 1.0, circa 2001.

Granted, some of the art around the lobby has been updated to remove the Orange Stinger and Maliboomer references (both can still be found on in-room paper materials), but it still feels a lot like old Disney’s California Adventure. This is cool for people like me who enjoy seeing remnants of DCA pre-overhaul, but it’s unfortunate for those paying ~$300/night that Disney hasn’t given the hotel a needed top-to-bottom refresh in the last few years.

Okay, now that I have all of my grievances with the hotel out of the way, let’s take a look inside the rooms. 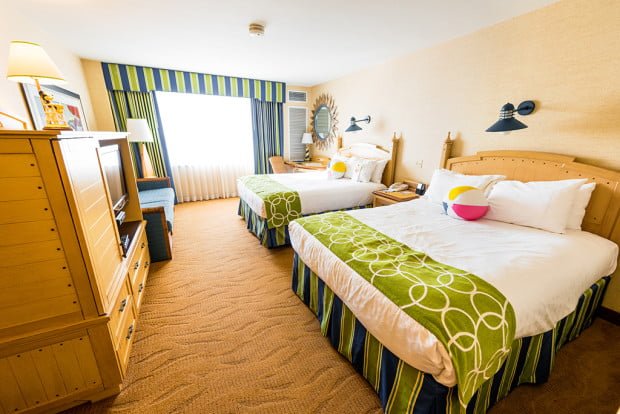 Here’s a wide look at the room. Actually not too bad. Clean and contemporary in appearance, with a light, beach-y look and feel. 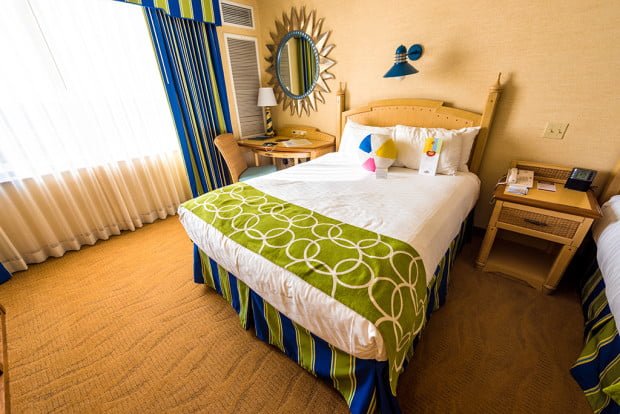 The bedding is comfortable, albeit not quite on par with the big name Anaheim Convention Center-area hotels. Still, by no means bad, and definitely better than what you’ll find on Harbor Boulevard (but with many of the Harbor Blvd hotels upgrading their bedding as of late, the gap isn’t as large as it was 2 years ago). 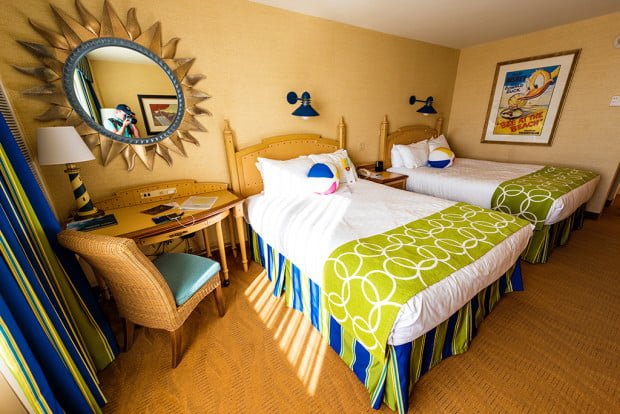 There are definitely some nice touches to the room, from the seaside designs of some of the fixtures to the vintage framed Disney cartoon art. 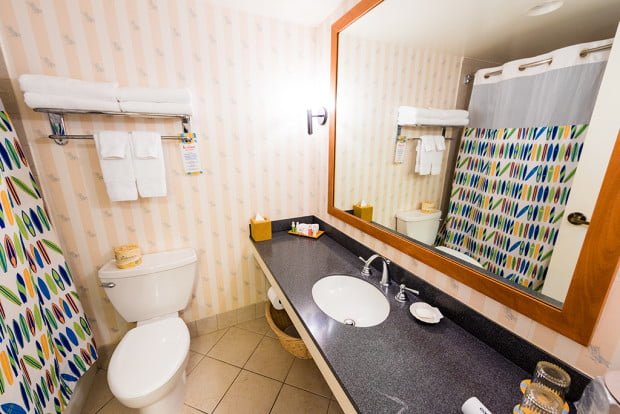 The bathroom is fine, but nothing special. 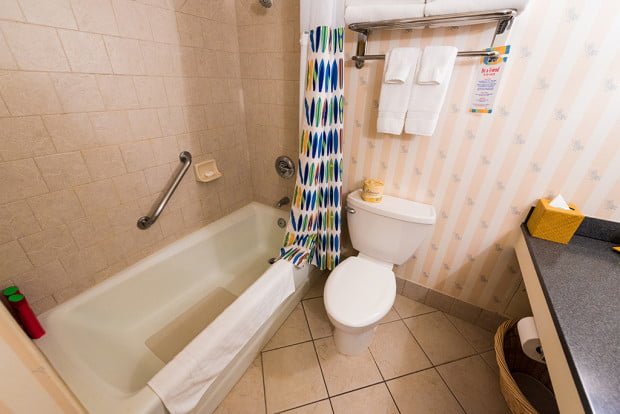 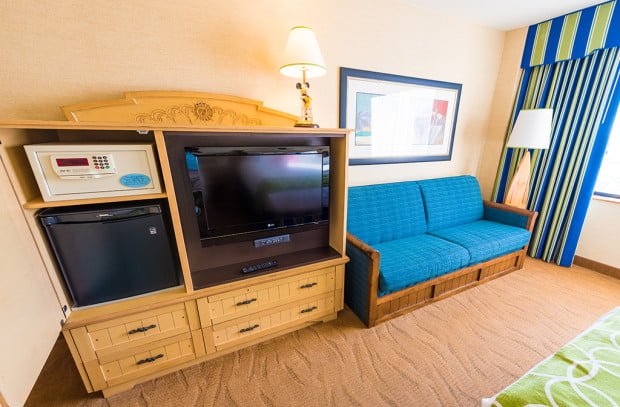 The rooms also offer couches, flat-screen televisions, mini-fridges, and safes. By themselves, the guest rooms are actually reasonable nice. It’s the rest of the amenities at the hotel that don’t carry their own weight. 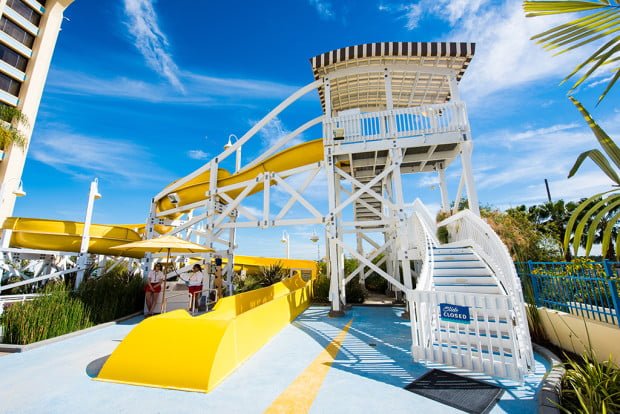 In terms of other amenities, Paradise Pier Hotel is solid, but not great. It has a fitness center, business center, and pool, all of which are fine. The pool is located outdoors on the third floor, and is pretty basic. The water slide is something you won’t find at most other off-site hotels, so that’s a plus. There’s also the PCH Grill on-site, which is a totally forgettable restaurants (besides the awesome straws they give you), and the lounge is basically just a quartered off section of the lobby.

The biggest amenity for most people is probably going to be the morning Early Entry/Extra Magic Hour, which allows early entry into Disney California Adventure or Disneyland an hour before the general public. This can be nice for experiencing Fantasyland in Disneyland or some of the headliners in DCA during busier times of year, but you can just as easily go to the park that is not offering Early Entry at rope drop for similar results. You also have to determine what this perk is worth to you. Is it really worth $100/day? 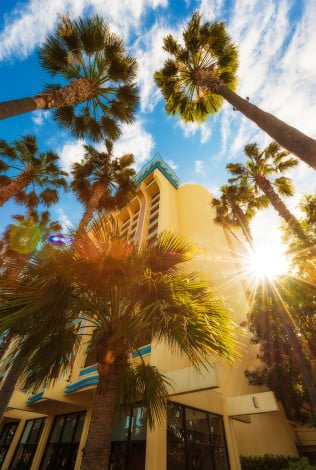 Overall, Paradise Pier Hotel is an okay hotel if you really want a Disney-branded hotel and can’t get into the vastly superior Disneyland Hotel or Grand Californian Hotel & Spa, which are two of my favorite Disney hotels anywhere. Paradise Pier Hotel actually does have some charm to it, but we just do not think it’s worth the money. If I were totally oblivious to its price, I would probably enjoy it a bit more. In terms of value for money, I think it’s an incredibly poor option, especially if you’re paying rack rate. Honestly, we’d rather stay off-site and save the money or spend a bit more and stay at Grand Californian or Disneyland Hotel.

Have you stayed at the Paradise Pier Hotel? Do you think I’m being too hard on it, or do you agree that it doesn’t have the same vibe and thematic touches found at most other Disney hotels? Considering this hotel? If you’re a Disneyland regular, do you prefer staying here, Disneyland Hotel, or the Grand Californian? Please share your thoughts or questions in the comments section below!