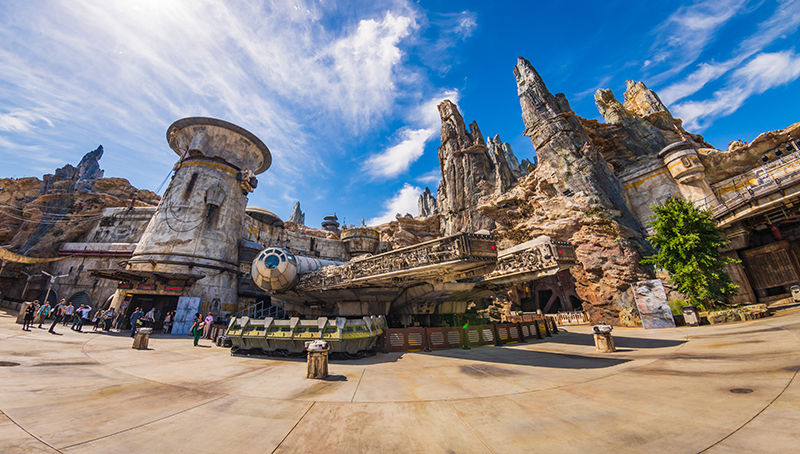 Greetings from Batuu! Today, I had the chance to visit Star Wars Land, ride Millennium Falcon: Smugglers Run, sample drinks at Oga’s Cantina, explore, and soak up details as part of a media preview of Star Wars: Galaxy’s Edge. And take a ton of photos in the process.

I have a lot more to say about this addition, but I’m still on cloud nine from the experience of visiting Star Wars: Galaxy’s Edge. Accordingly, I want to hold off on more comprehensive reviews until I have a chance to reflect, collect my thoughts, and write some coherent and measured, rather than a bunch of hastily strung-together superlatives.

In a nutshell, the themed environments of Batuu and Black Spire Outpost are a new high water mark for Imagineering. All of the recent blockbuster additions that were themselves praiseworthy now seem like a warm-up act; proof-of-concept for Star Wars: Galaxy’s Edge. The land itself is the star of the show, and simply being there is a joy.

As indicated above, my biggest takeaway from experiencing Galaxy’s Edge is that the land itself is the biggest attraction. I don’t mean that in the Disney sense of the term, and am not going to offer ‘justification’ for the land being incomplete and only having one ride right now by saying, “actually, there are 5 attractions if you count Oga’s, the land itself, that one drinking fountain that has the cool effect, and…”

Rather, I’m saying that the themed environments of Batuu are the primary draw of Star Wars: Galaxy’s Edge. There are so many intimate areas, winding pathways, and details–from small things like light fixtures to large starships. I spent several hours in Galaxy’s Edge simply wandering around, taking it all in. 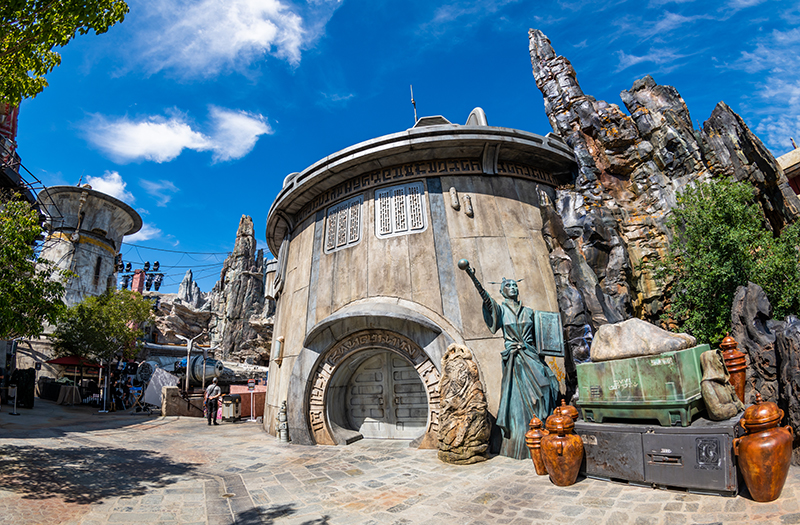 I really hope Disney keeps attendance well below capacity, because having the freedom and space to actually explore and get lost in the market is what makes Galaxy’s Edge special. That’ll almost certainly be lost if the land is overly congested. The good news there is that Galaxy’s Edge has a ton of physical space to soak up crowds, and the majority of that area is also worthy of getting lost exploring.

Those of you who are attraction junkies may not be able to relate to my sentiments about the themed places being the primary draw, or view that as cover for Millennium Falcon: Smugglers Run being weak (it’s not) or ‘cover’ for Rise of the Resistance not being open. 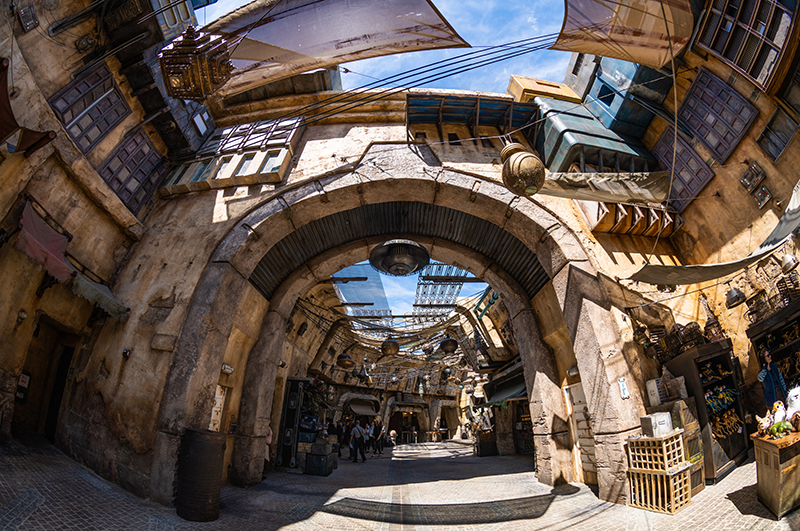 For me, themed environments reign supreme. For what it’s worth, I’d say the same “land is the primary attraction” sentiment applies to Pandora, Diagon Alley, Adventure Isle, and most of Tokyo DisneySea. It arguably also applies to Cars Land and Hogsmeade, although the two exemplary flagship attractions in those lands might edge the lands themselves for me.

When it comes to Star Wars: Galaxy’s Edge, I have sky-high expectations for Rise of the Resistance, but I can’t imagine how it could top Black Spire Outpost and the rest of Batuu. 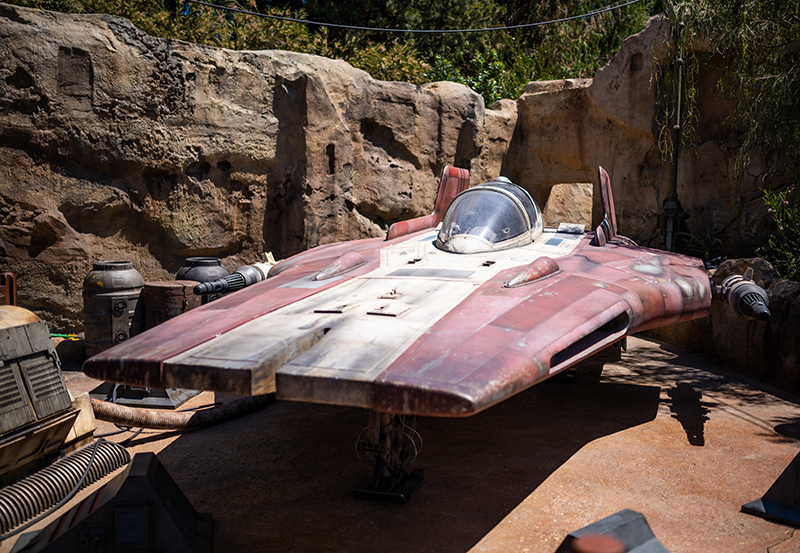 While Star Wars: Galaxy’s Edge is a totally new environment, it speaks the language (both literally and visually) of Star Wars perfectly.

You’ll see a lot of design motifs that are reminiscent of other planets from the various Star Wars films, in addition to the obvious things like the Millennium Falcon, various droids, characters, and tools. Batuu feels new, yet familiar. 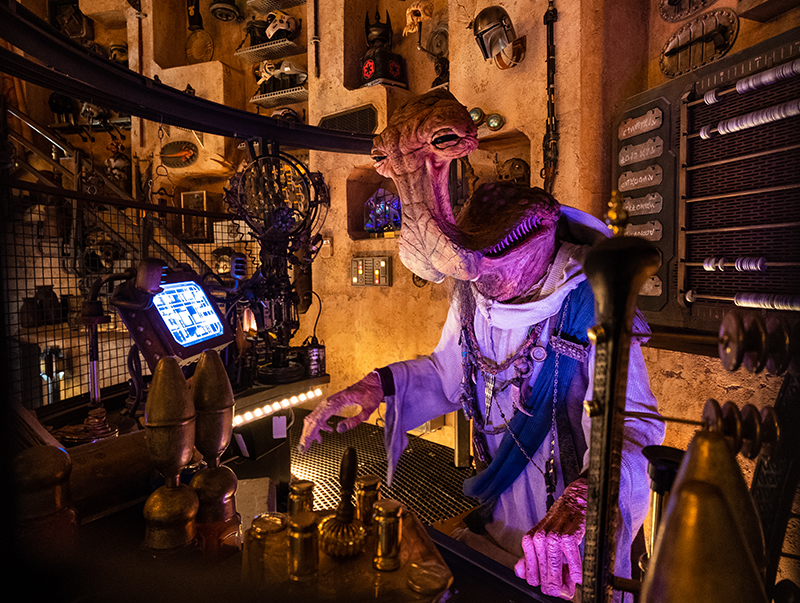 As only a casual Star Wars enthusiast, I went in with some trepidation that a lot of the land would be totally lost on me. However, the Imagineers have drawn inspiration from real world locales, including those of the Middle East and Petrified Forest National Park, among other places.

While I’m sure some of the land’s nuances and quirks are lost on me, it’s easy to see parallels to real world locales, architectural styles, and design influences. Batuu is grounded in Star Wars, but it also stands on its own and can be easily appreciated by anyone. The learning curve didn’t feel steep, even if there are a ton of terms and character names I still don’t know. 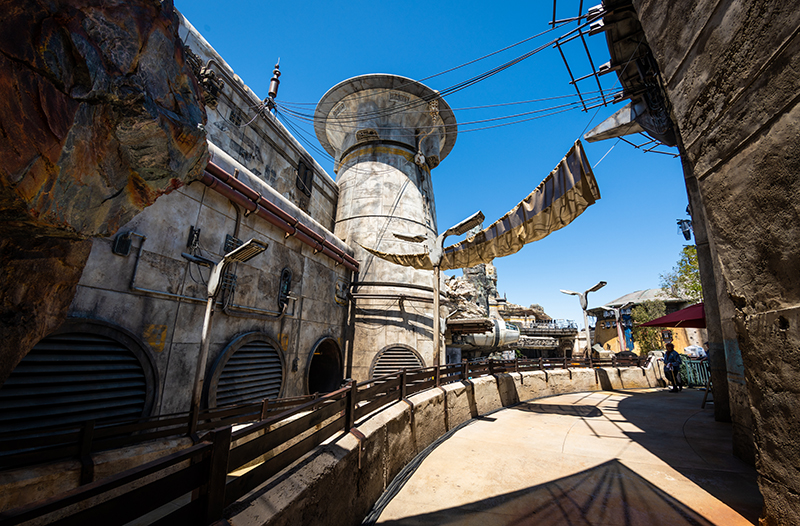 My initial reaction as to what’s most impressive about Galaxy’s Edge is how Imagineering has iterated upon other theme park lands (specifically, those named above). It really feels like Imagineering took the lessons learned from what worked and didn’t about other recent lands, and applied them–with great success–to Galaxy’s Edge. 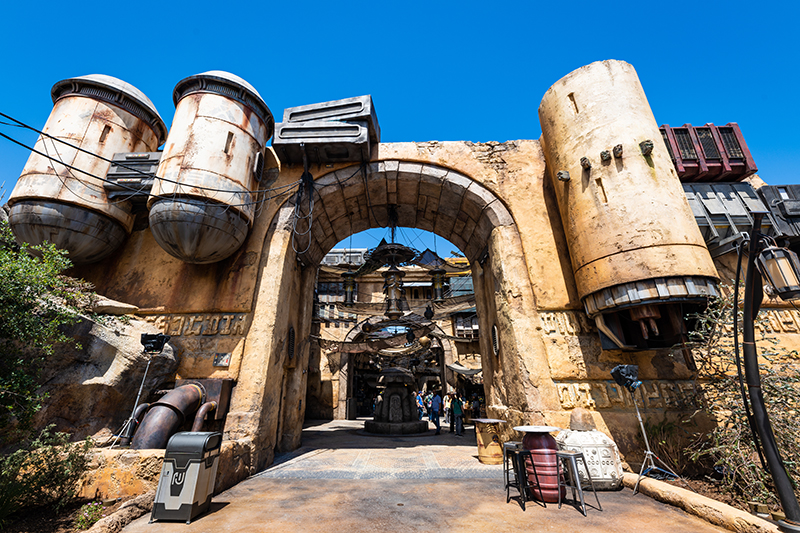 The hyper-immersive single environment is obviously the future (well, and the present) of theme parks, and Imagineering excellently carries the torch forward in that regard.

Star Wars: Galaxy’s Edge is going to be difficult to top in terms of environments, and I can’t think of any projects on the horizon that are likely to best it in that regard. (Maybe Super Nintendo World or Fantasy Springs, but both seem more ride-centric.) 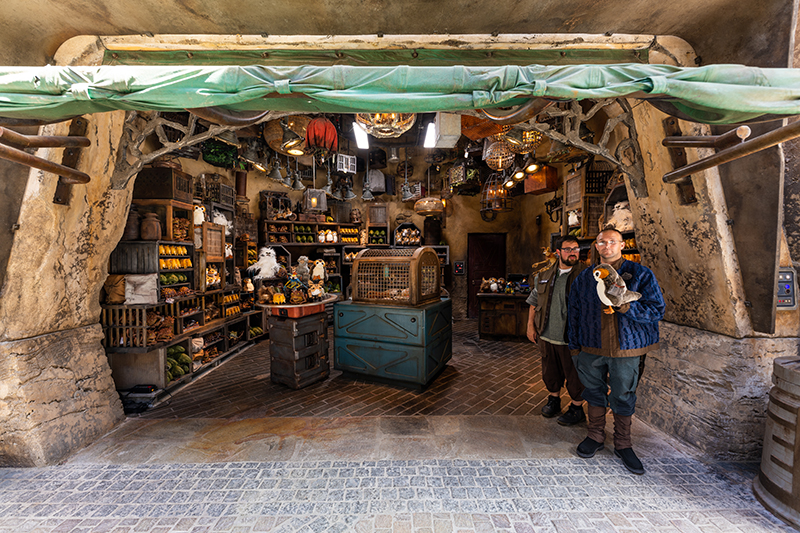 The other big takeaway from this should be that this is a themed environment that literally every Disney fan should make an effort to see. This is not just for Star Wars enthusiasts.

I know some readers–especially those with Walt Disney World trips planned this fall who were hoping to “beat” the opening of Galaxy’s Edge–have indicated they will avoid Star Wars Land. I’d strongly encourage you to make every effort to see it. 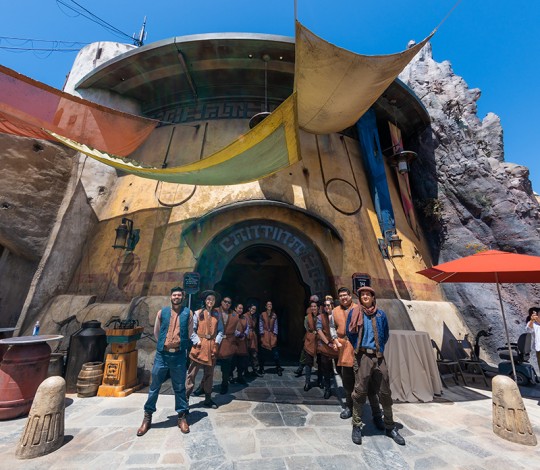 Take advantage of early openings or late nights to avoid crowds (to the greatest extent possible). Don’t let not liking Star Wars, be your hang-up about visiting, as that’s not really an issue. Just imagine this as “Space Morocco” and you’ll be fine.

You won’t find the words “Star Wars” literally anywhere in the land–even on merchandise–so it should be pretty easy for a non-fan to enjoy the land. There’s just too much great stuff here to overlook Galaxy’s Edge completely. 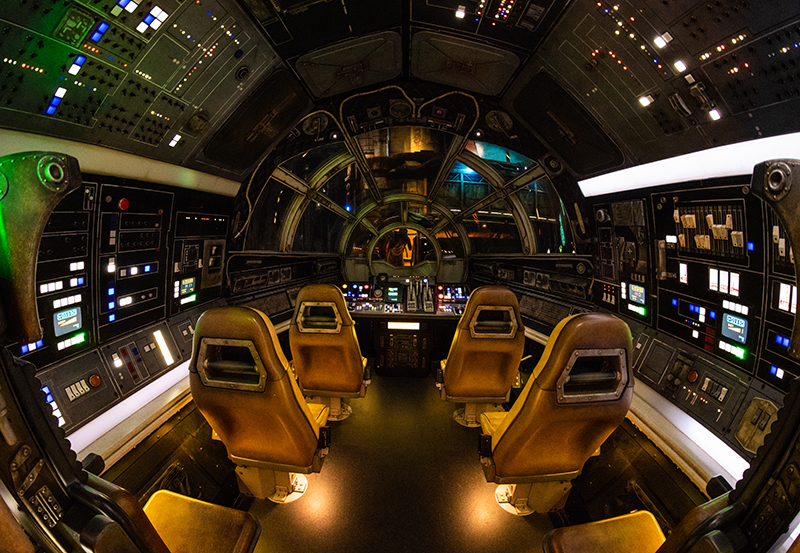 Attraction-wise, Millennium Falcon is very good, but it’s not the land’s flagship ride. Even here, the main draw is the themed environments–being aboard the famed Millennium Falcon. The queue, pre-shows, and cockpit, make this attraction is really impressive…before the attraction even starts moving. (Think Flight of Passage’s queue, but with a good pre-show.)

That’s not to diminish the actual ride, which is a lot of interactive fun. (Piloting the Millennium Falcon is also way more challenging than I expected, and apparently I’m not very good at it.) This should say more about the depth, detail, and immersiveness of the queue and pre-shows. These are fantastic, and will satisfy the lifelong desire many people have had to step inside the Millennium Falcon. That’s an incredible feeling. 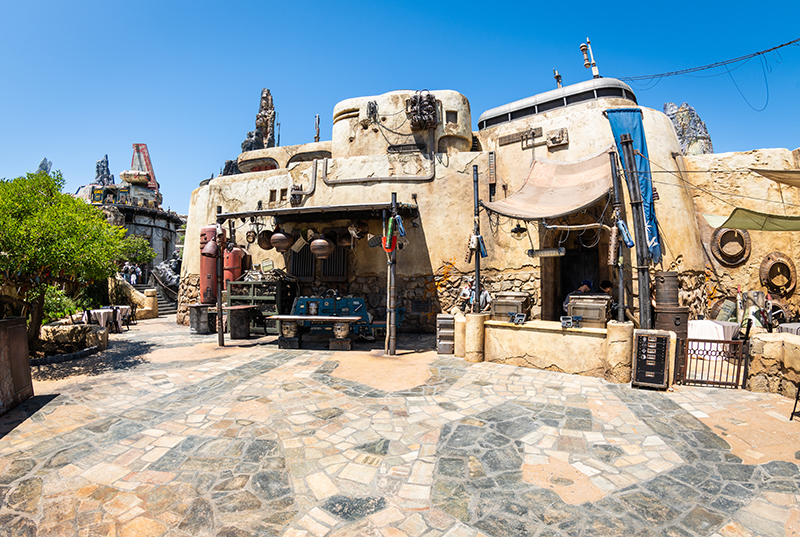 I think that’s a good point to end these hasty first impressions, which I feel like have rambled a bit (apologies if so). Even though I’ve already spent several hours “on” Batuu, I’ve only scratched the surface. I spent the vast majority of my time wandering around, and still have so much more to see, do, eat, etc. I’ll be heading back in tonight and tomorrow morning, and my goal is to get a full review of Star Wars: Galaxy’s Edge up after that. In that, I’ll try to address everything I didn’t cover here, from how it fits into Disneyland to food & drinks to logistics and more.

If you’re planning on visiting the new land, you’ll also want to read our Star Wars: Galaxy’s Edge Guide. This covers a range of topics from basics about the land and its location, to strategically choosing a hotel for your stay, recommended strategy for the land, and how to beat the crowds. It’s a good primer for this huge addition.

What do you think of my Star Wars: Galaxy’s Edge first impressions? What about the new land has you most excited? Looking forward to piloting the Millennium Falcon? Trying some of the unique Star Wars foods & drinks? Dropping a few grand in the gift shops? Any questions? Hearing your feedback–even when you disagree with us–is both interesting to us and helpful to other readers, so please share your thoughts below in the comments!