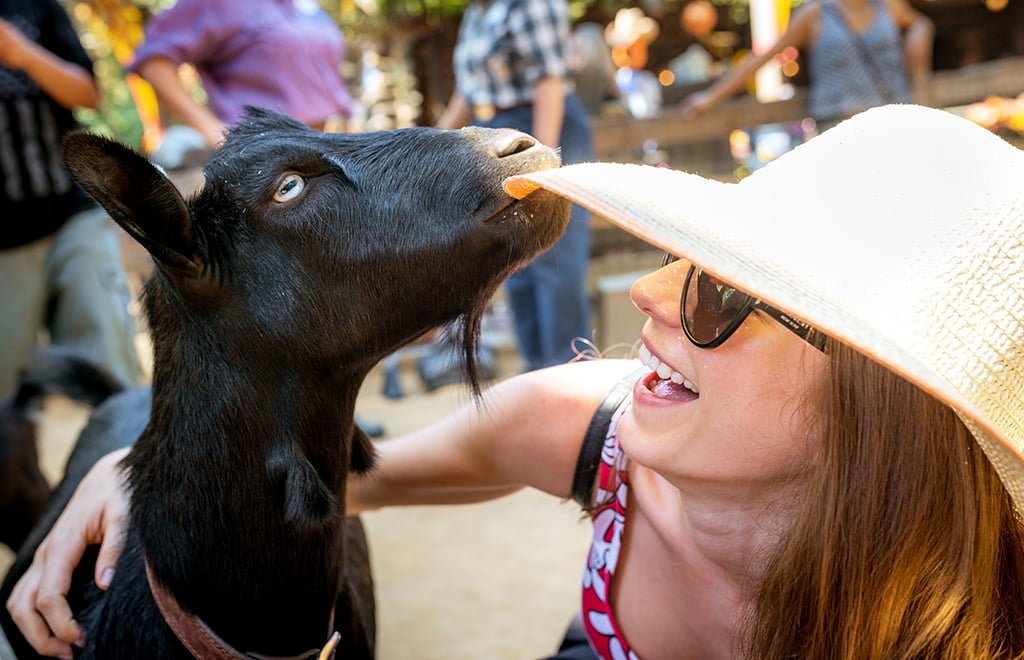 For the last 5 years, there has been a gaping void in the Disneyland Resort landscape. Looking back on this dark period, future historians will doubtlessly agree that no other event in California (the entire state, not just the parks) had more devastating consequences on the integral intersection of barbecue meal enjoyment and goat goodness.

Of course, we’re talking about the closure of Big Thunder Ranch. Back in January 2016, the goats had their last running and the barbeque served its final meats. Construction of Star Wars: Galaxy’s Edge began shortly thereafter and that land opened a few years later.

Yet somehow, our long national nightmare of a goat and barbecue-free Disneyland has persisted. According to some analysts, this contributed to the low crowds following the opening of Galaxy’s Edge, and is a theorized explanation for why the state kept Disneyland closed for over a year. Fortunately, there has been a positive development on one of those fronts…

This comes as Paradise Garden Grill changes menus yet again, and is now offering a special menu of “lip-smackin’ barbecued meats and scrumptious sides.”

Previously, the permanent menu at Paradise Garden Grill consisted of light and refreshing Mediterranean cuisine, including savory skewers and freshly-made salads. It has also offered a rotating menu that has changed with each of Disney California Adventure’s seasonal events (Lunar New Year, Food & Wine, Holidays). 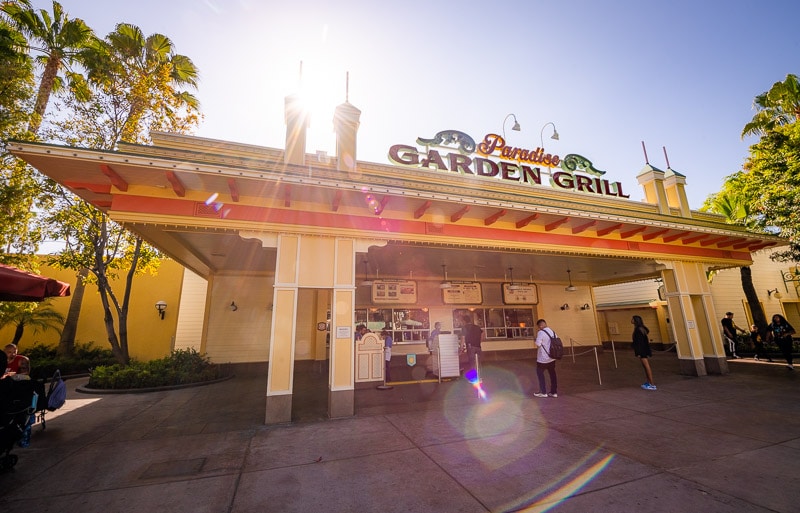 For those who are unfamiliar with it, Paradise Garden Grill is tucked away alongside Boardwalk Pizza & Pasta in a quiet corner of DCA. So quiet that it was “forgotten” as the rest of this land transformed to Pixar Pier. Whoops!

Both restaurants were “added” to Paradise Pier as part of Disney California Adventure’s huge overhaul, replacing the eclectic Pizza Oom Mow Mow and Burger Invasion. Although DCA lost those two true Disney Legends, Paradise Garden Grill have been worthy replacements. You might even say things are now coming full circle, paying “tribute” to Big Thunder Ranch BBQ…or something like that. 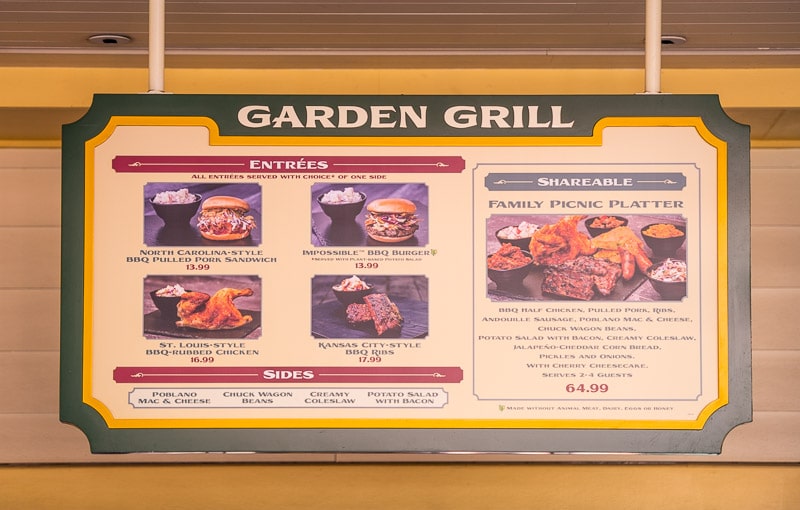 For summer, Disneyland has introduced a new “picnic” menu that might as well be dubbed Disney’s Carnivorous California Adventure (there’s also one plant-based option). The highlight is the Family Picnic Platter, which combines most of the individual entrees into a formidable mountain of meats.

Paradise Garden Grill advertises this as serving 2 to 4 guests. 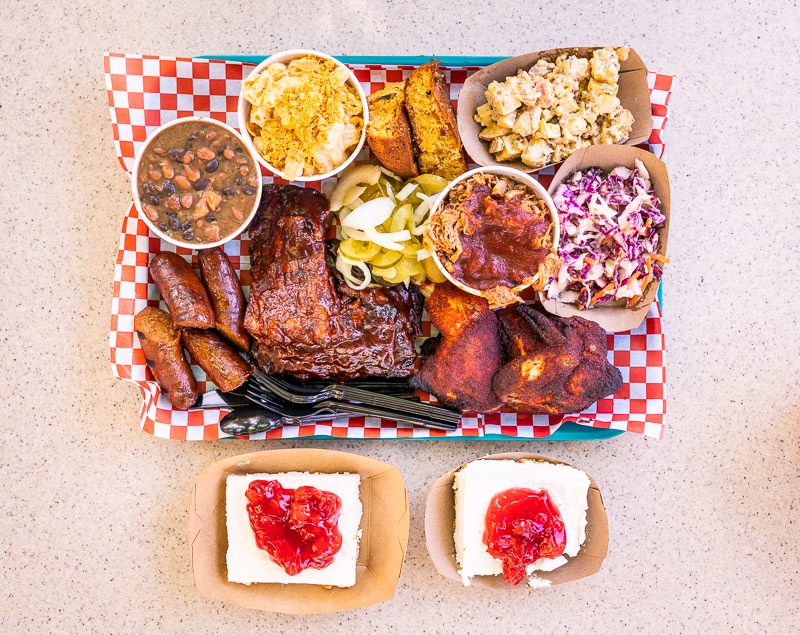 At a total cost of $64.99, that works out to $16.25 to $32.50 per person, depending upon how many people it actually feeds. That swing is the difference between an average counter service meal and a lower tier table service one.

Sarah and I were joined by Guy Selga of TouringPlans.com, known for his Award Wiener-eating exploits. When he’s not busy downing the ‘dogs, Guy also enjoys consuming other meats–and so do we. The point is that the three of us can eat, making this more or less a test for whether the platter will feed 4 adults. 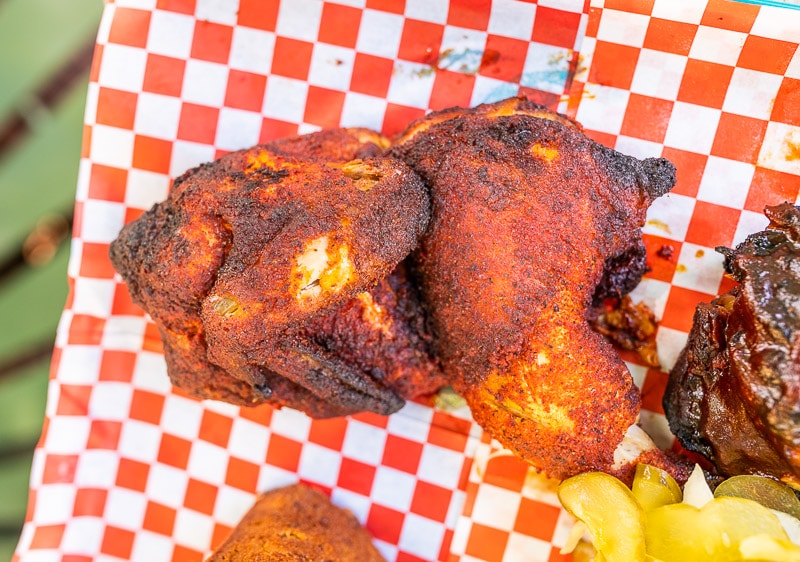 This beer-brined, roasted half chicken has a heavy rub that gives it a crisp, textured exterior that gives way to moist and flavorful chicken underneath. This was Sarah’s favorite portion of the meal. I liked it far less, but still thought it was a quality dish–albeit undersized for 4. 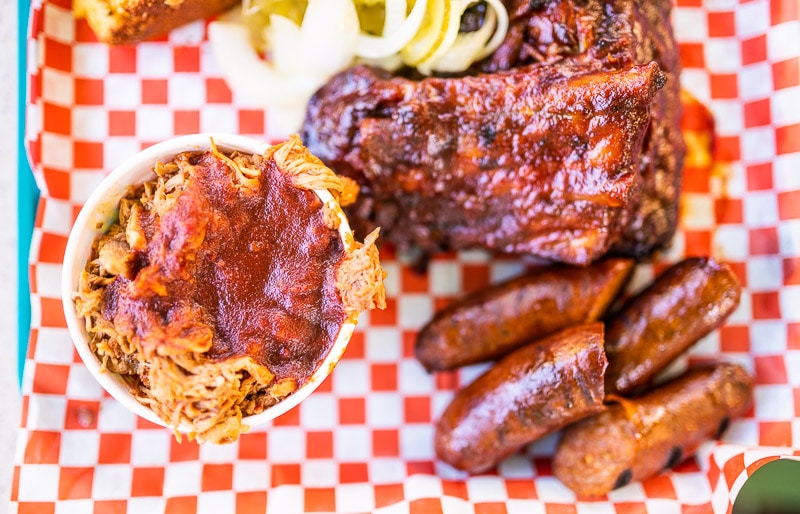 Or rather, the pork itself is fantastic. It’s juicy and delicious, with an acidic and uniquely sweet flavor that made it addictively good. We all agreed that the sauce actively detracted from the meat, tasting cheap. It’s like the counter service equivalent of putting ketchup packets on filet mignon. You might want to request this without sauce–or at least on the side. 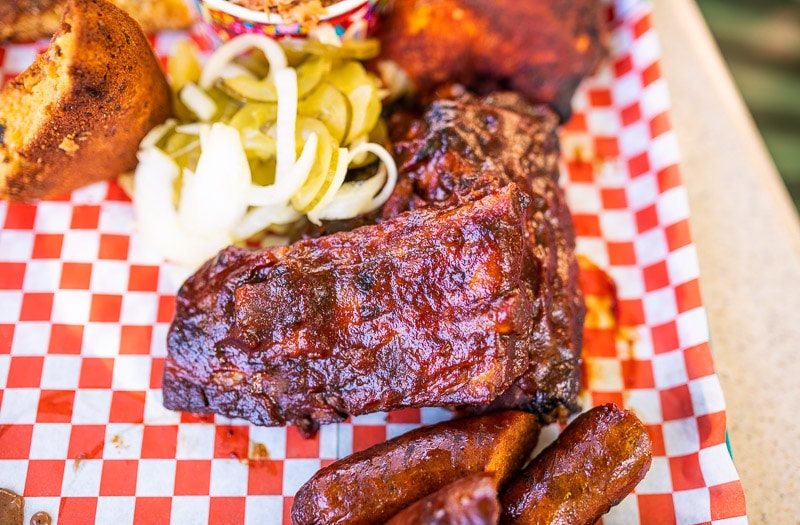 The meat itself is surprisingly delicious–reasonably good quality, tender, and properly prepared. My only complaint was that this portion is too small for 4 people. The BBQ sauce once again tasted cheap. Despite that, I’d rank the ribs and pulled pork as the #1 and #2 components of the meal, respectively. 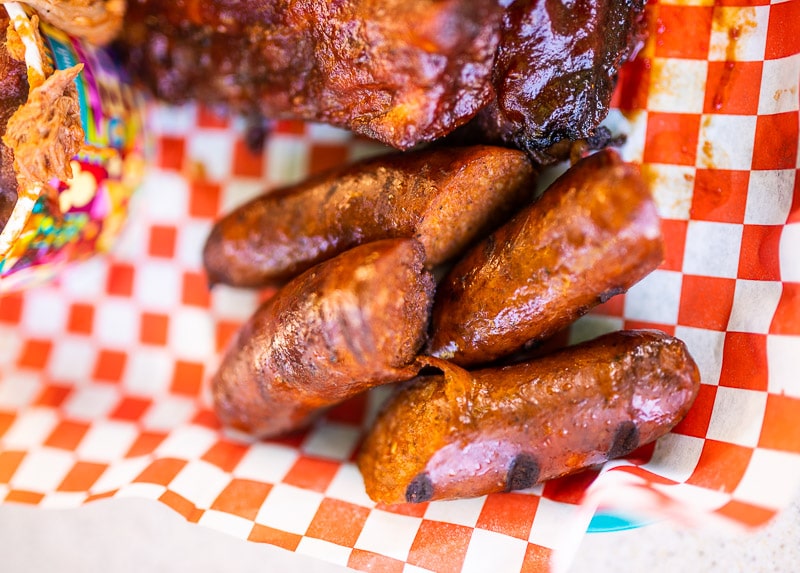 Our final meat is the Andouille Sausage.

I’d call these the sleeper of the whole meal, with a sharp snap to the casing and good char from the grill. They’re mild enough for most guests, with just a bit of spice to up the flavor. Another winner. 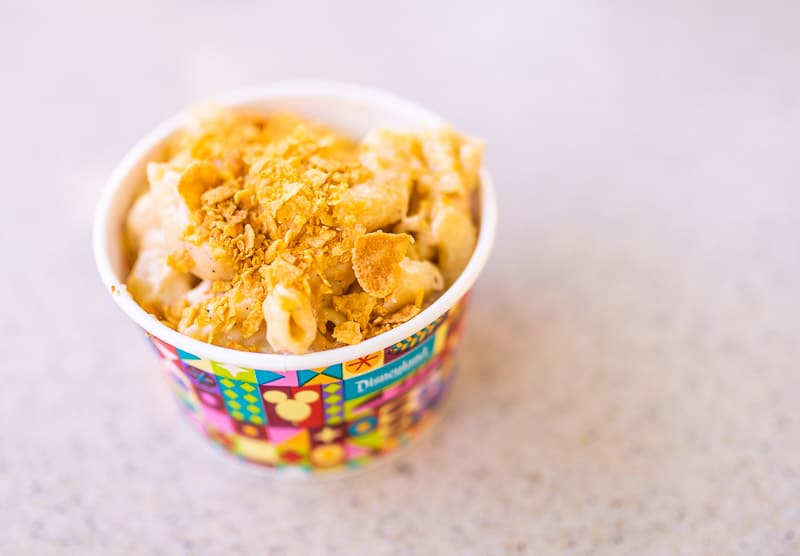 Turning to sides, we start with the Poblano Mac & Cheese.

This is a winner, with a quality blend of gruyère, cheddar & mozzarella cheeses and a light punch from the poblano peppers. The toppings added a bit of texture, but that truly wasn’t necessary (and felt a bit forced). The definite winner among the sides, and the only one we all wanted more of. 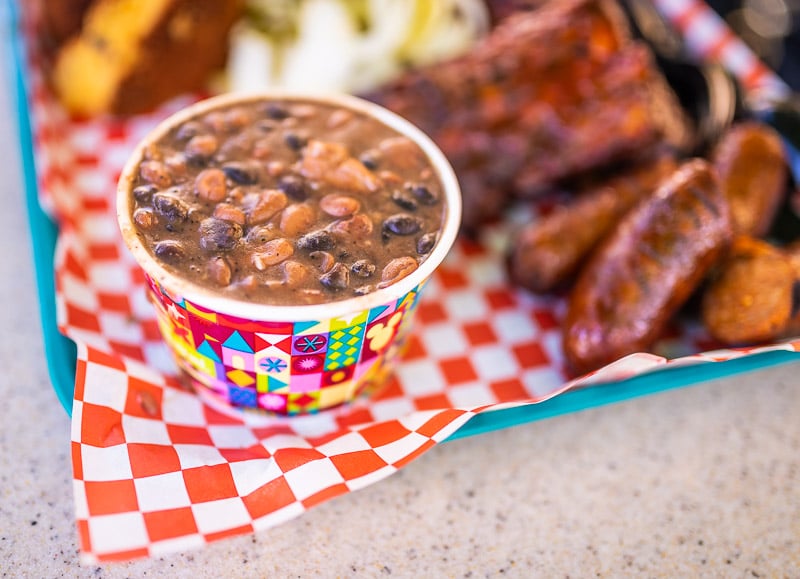 Next up, the Chuck Wagon Baked Beans with Pork Belly and Ham Hocks.

Putting pork in baked beans is about the only way you can get my attention; I’m not the right person to review this dish–I’ve never thought “baked beans sound good.” (Judging by the fact that this was the only side we didn’t finish, no one loved this side.) 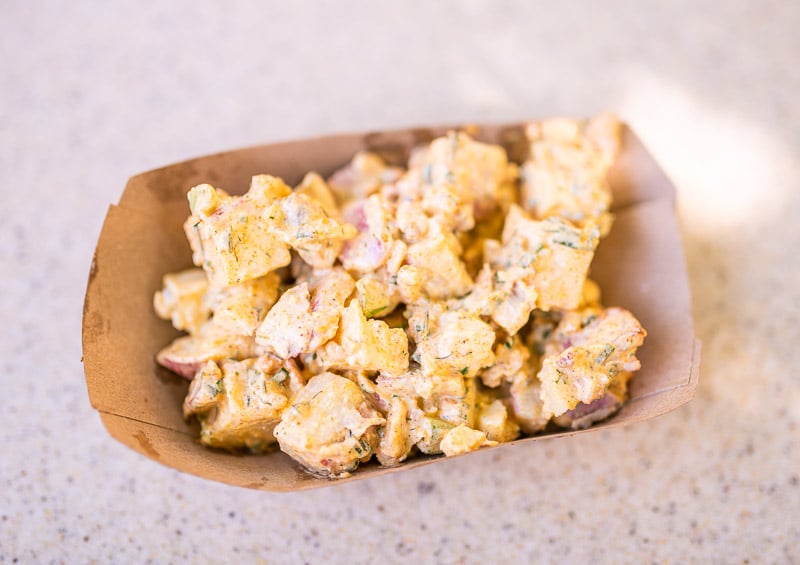 The Potato Salad with Eggs and Bacon is also good.

For me, this side is another winner–a reasonably ambitious mix of flavors. I ate most of the potato salad. 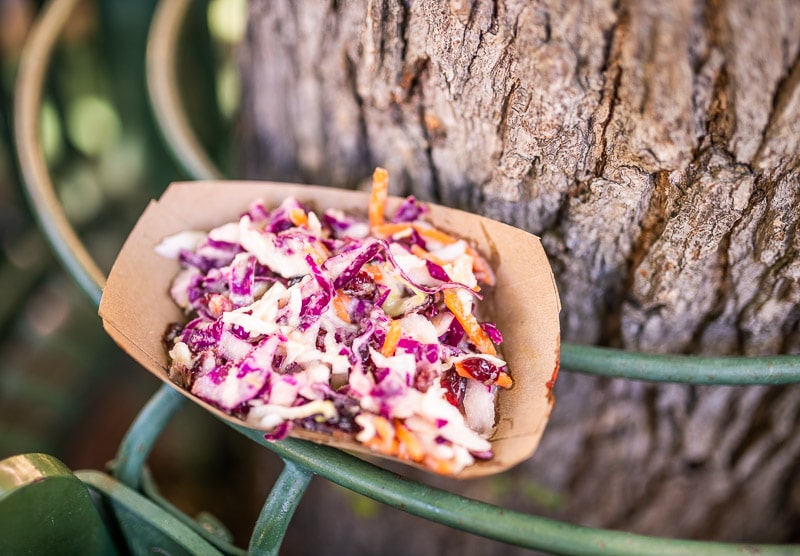 Rounding out the other sides are creamy cole slaw and pickles & onions.

Both were fine–good as a serving of vegetables or whatever these things qualify as from a nutritional perspective. 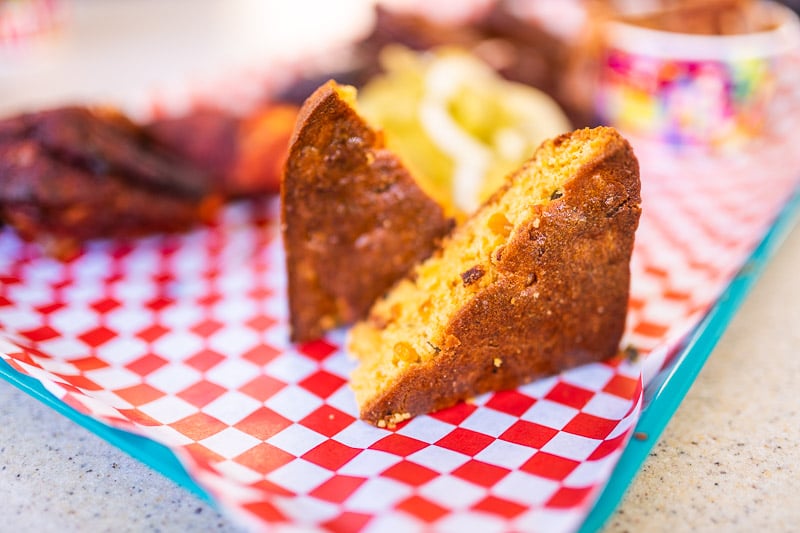 The Jalapeño-Cheddar Corn Bread is an abomination.

Our wedges of this were rock hard. Great if you want to place them under a tire so your car doesn’t slide downhill; not so good as a side. Hopefully we just got unlucky, as normally cornbread is something Disney does pretty well. 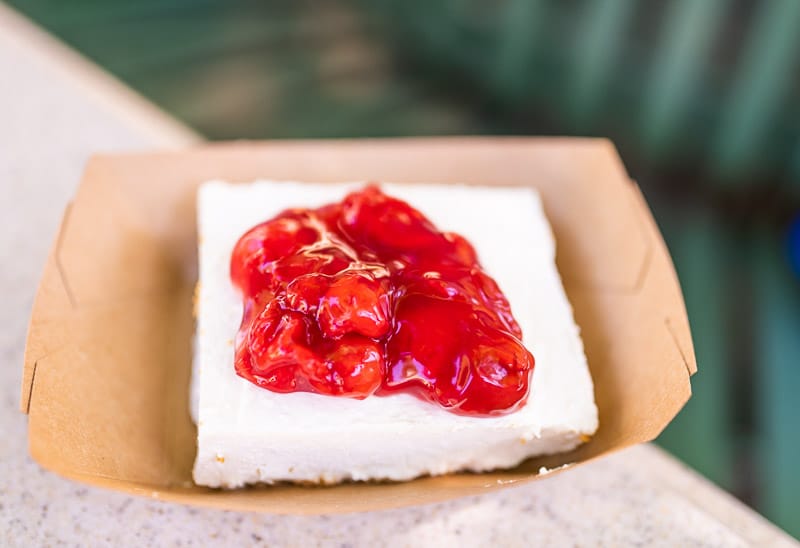 There was much debate among the 3 of us while waiting for our food about how many slices of cherry cheesecake would accompany our picnic platter. Would it be variable, a Cast Member call based on how many of us were at the window? Or a set number of slices, likely either 2 or 4? This could be the make or break meal element, dictating whether this platter served 2, 3, or 4 adults.

Two shareable pieces was the answer, still leaving the door open for the platter feeding 2-4. The cheesecake itself is simply, with a light and creamy base that’s good on its own–but totally overpowered by the canned cherries on top. I still liked it, but I think Guy and Sarah weren’t as keen on it. 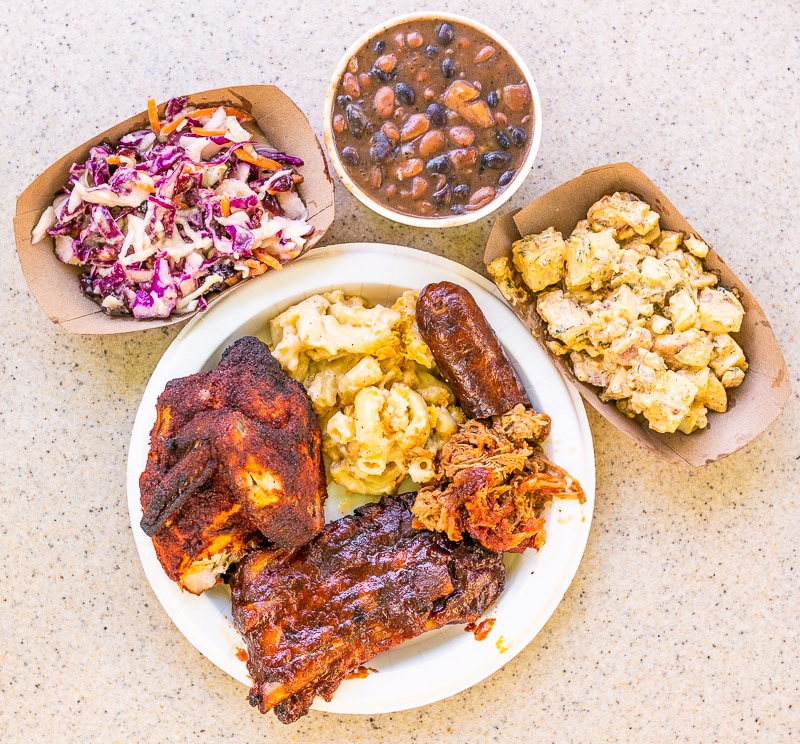 Ultimately, the Picnic Platter at Paradise Garden Grill was pretty good; a fun option for the summer for a family that wants to sample a variety of meats and sides. Generally speaking, the quality is better than most counter service restaurants, with everything (except the cornbread) offering some nuance or interesting twist. My biggest complaint would be the sauce that tasted like cheap and generic bulk brand and diminished the quality of the pulled pork and ribs.

As for how many guests it feeds, that depends. Our group of three “experienced eaters” easily ate everything except the beans, some coleslaw, and rock-hard cornbread. I personally ate about one-third of the meat and other sides, plus most of the potato salad and cheesecake. I was fairly full as a result, but I know Sarah and Guy were not. Consequently, I’d say this falls short of being enough food for 4 average adults–3 is probably the sweet spot so long as you eat everything.

In the end, we would not recommend the Picnic Platter at Paradise Garden Grill to most first-timers. Even though we mostly liked the meats and sides, it’s simply not unique or memorable enough to justify as one of your few meals at Disneyland Resort. While the quality is above most counter service standards, it still doesn’t quite measure up to French Market or Plaza Inn. There are also specific dishes at Pym Test Kitchen and around Pacific Wharf that you could cherry-pick for a better dining experience.

On the other hand, locals might want to give it a try–as something new and unique, it’ll satisfy “completionist” Disneyland fans. Despite there being a disturbing lack of goats in this area and the cuisine quality falling short of Big Thunder Ranch BBQ, the picnic platter is fun and chilling in Paradise Garden is a good time.

Have you tried the Family Picnic Platter at Paradise Garden Grill? Have any favorite or least favorite meats or sides in this family feast? Do you agree or disagree with our assessment of the food? Hopeful that it’ll go back to the light Mediterranean menu after summer is over? Any questions? Hearing your feedback—even when you disagree with us—is both interesting to us and helpful to other readers, so please share your thoughts below in the comments!