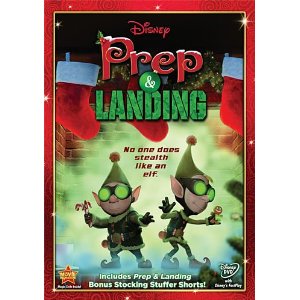 The term “instant classic” gets thrown around fairly recklessly, but in the case of Disney’s Prep & Landing, I think it safely describes the CG animated-special’s place among Christmas favorites. When our review copy showed up, I was so excited to see this special again that I watched the DVD all the way through (special features and all) three consecutive times. Simply put, Prep & Landing is so TINSEL!

Prep & Landing tells the modern-day story of what goes on behind the scenes before Santa Claus arrives at a child’s house. An elf named Wayne, voiced by David Foley, who is just one of many members of the Prep and Landing team. Their mission: Get In. Get Out. Never Be Noticed. The story begins with Wayne on the verge of realizing his life’s goal, being promoted to Director of Naughty List Intelligence. Unfortunately, the partner who Wayne trained ends up being promoted instead.

Wayne is thus given a new partner, Lanny, and the story really picks up as Wayne and Lanny, voiced by Derek Richardson, head out on their first mission. Wayne and Lanny find themselves in a predicament as Wayne’s slouching on the job, and a snowstorm, almost ruin Christmas for one child. The Prep & Landing team must use their skills of improvisation in order to land Santa’s sleigh!

Since first premiering in 2009, Prep & Landing has continued to gather steam. It has inspired toys, Hallmark ornaments, a seven-minute “sequel” in 2010 (and a full sequel to come called Prep & Landing: Naughty v. Nice in 2011), and even a World of Color tag at Disneyland Resort’s Disney California Adventure park! Suffice to say, the Christmas special has already become incredibly popular in its first two years.

Knowledge of this year’s Prep & Landing special makes it difficult for me to give this a resoundingly positive recommendation. Given the scant extras (last year’s 7 minute short titled Operation Secret Santa, another short, and a few incredibly cool Kringle Academy training videos) and that it was only released on DVD this year, it seems to me a foregone conclusion that a more fleshed-out Blu-ray will be on the way in the next few years.

However, for those huge fans of Christmas and Disney like myself, the immediacy of the current release easily overcomes any concerns of subsequent double-dipping. I can’t watch Prep & Landing’s future Blu-ray release this year, so for now, this is a must-own title for me. At the current $14.99 price on Amazon.com, other fans of Christmas specials should likewise pick this up! Trust me, it will look nice on your shelf between copies of Emmet Otter’s Jug-Band Christmas