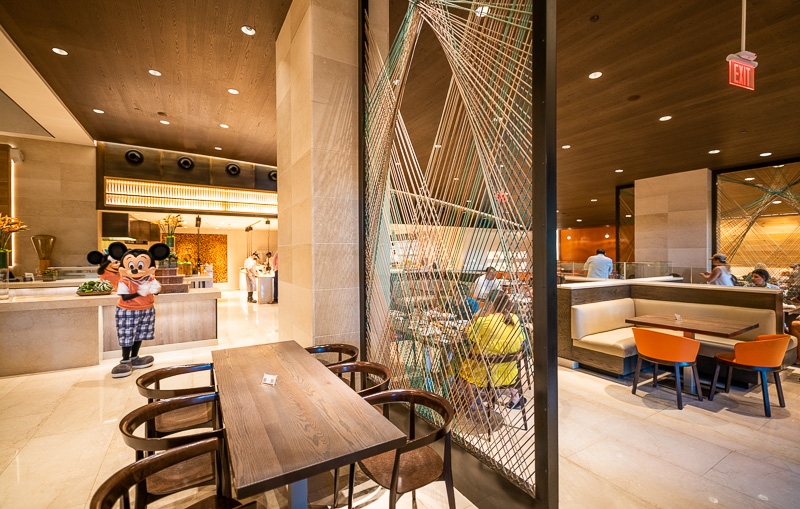 Good Morning Breakfast with Goofy & His Pals is a character meal at Ravello. In this Walt Disney World dining review, we’ll share photos with Mickey Mouse and friends, a look at our food, and thoughts on how this breakfast at Four Seasons Orlando stacks up to the alternatives at other hotels.

Prior to Good Morning Breakfast with Goofy, we previously did the new Breakfast Á la Art with Mickey & Friends, and felt that character dining experience was a mixed bag. It was fun for us (as adults without kids), but unlike the normal version of that meal, not something we could recommend without significant caveats.

In addition to that, there’s also currently a “rare and secluded” character dining experience running at Walt Disney World–Good Morning Breakfast with Goofy & His Pals. Wanting to see if this might be a better option, we booked Advance Dining Reservations and headed over to check it out…

Those are air quotes around “rare and secluded” above, but it’s also an apt description for Good Morning Breakfast with Goofy & His Pals, which is a relative unknown among Walt Disney World fans. This is for a fairly simple reason: this character meal is only offered on Saturday mornings at Ravello (hence it being rare).

For those unfamiliar with the name Ravello, it’s a modern Italian restaurant at Four Seasons Orlando. For those unfamiliar with that resort, it’s tucked away on Walt Disney World property near Golden Oak and Fort Wilderness Campground (hence it being secluded). Even though many Walt Disney World fans have probably never seen or even heard of it, this is one of the closest resorts to Magic Kingdom–so it’s not exactly a long trudge off-site or even mildly inconvenient. 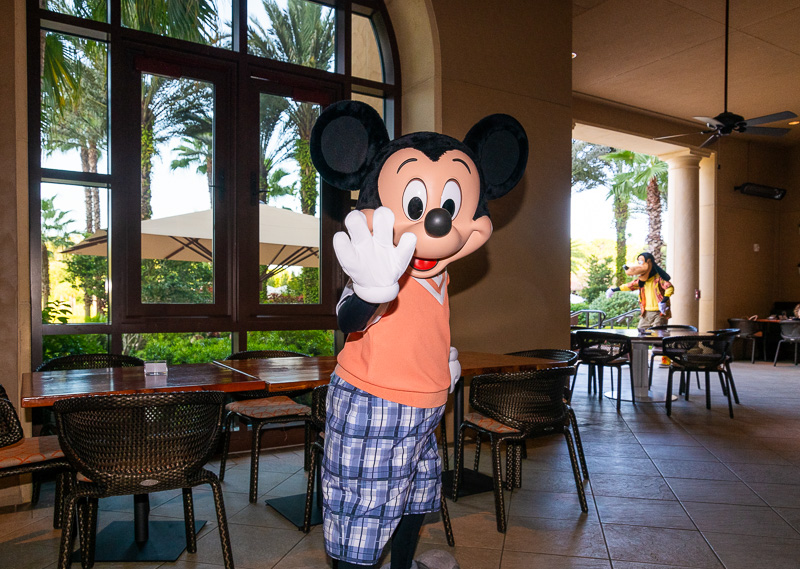 Four Seasons Orlando bills Ravello as being a “modern Italian restaurant” which features an open kitchen, elegant atmosphere, and chic interior design. It also features tall, arched windows and an outdoor terrace, the latter of which was our primary motivation for booking this breakfast.

When we called the Four Seasons to book this Advance Dining Reservation, we specifically requested a table outside. Unlike most Walt Disney World restaurants, this is a request you can make while booking. 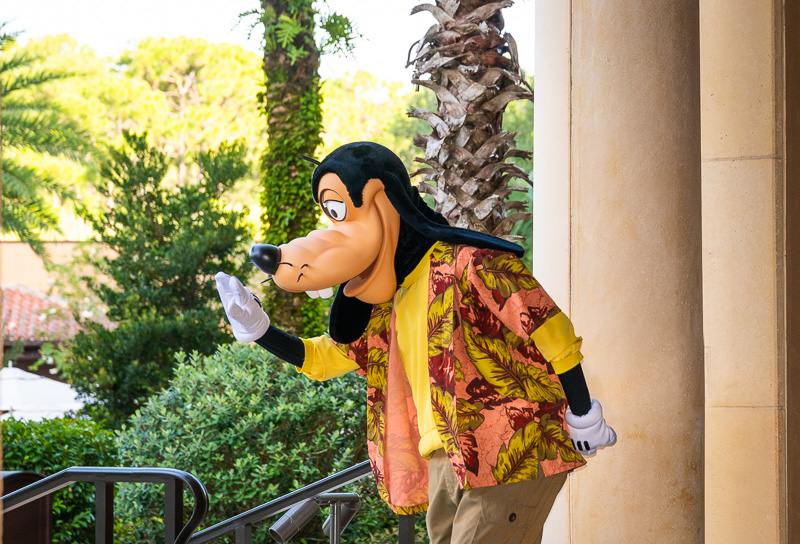 Calling this terrace “outside” is actually a bit of a misnomer, as it’s more indoor/outdoor with giant archways and windows allowing in plenty of fresh air, but without exposure to the weather or heat. Best of both worlds. 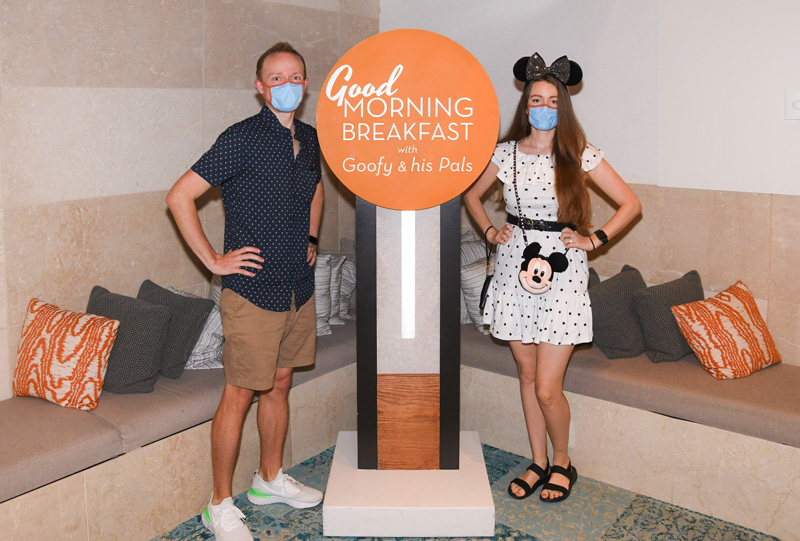 Good Morning Breakfast with Goofy & His Pals at Ravello begins with a Disney PhotoPass photographer taking a few shots, including “magic” ones (ours had Mickey Mouse seated on the bench next to us–this same shot is always available in Magic Kingdom and probably elsewhere).

Below is a look at the menu for Good Morning Breakfast with Goofy & His Pals at Ravello. As you can see, it’s $48 per adult and $28 for children. 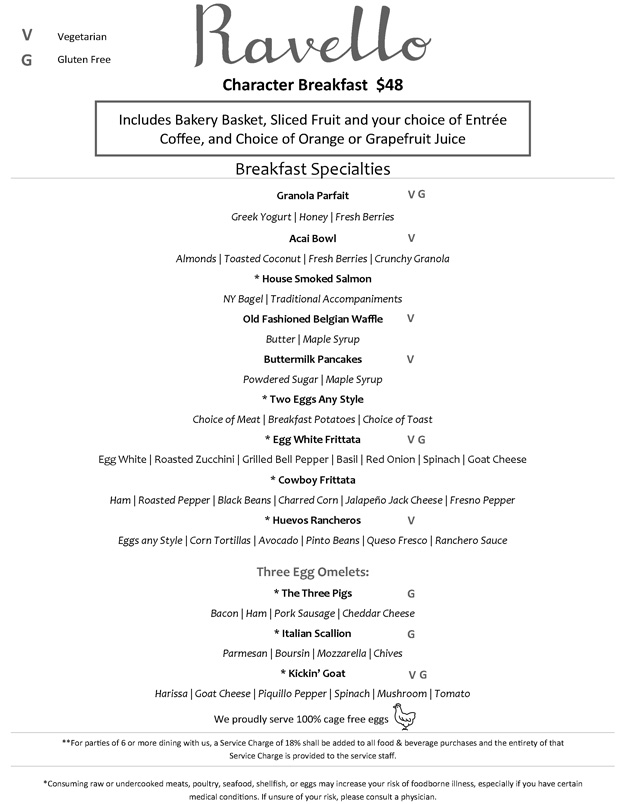 The menu includes a bakery basket, sliced fruit, your choice of entree, coffee, and orange or grapefruit juice.

Normally, this breakfast is a buffet. (Unlike other prix fixe character meals at Walt Disney World-owned locations, ordering two entrees per person is not offered here–unless you want to pay double.) 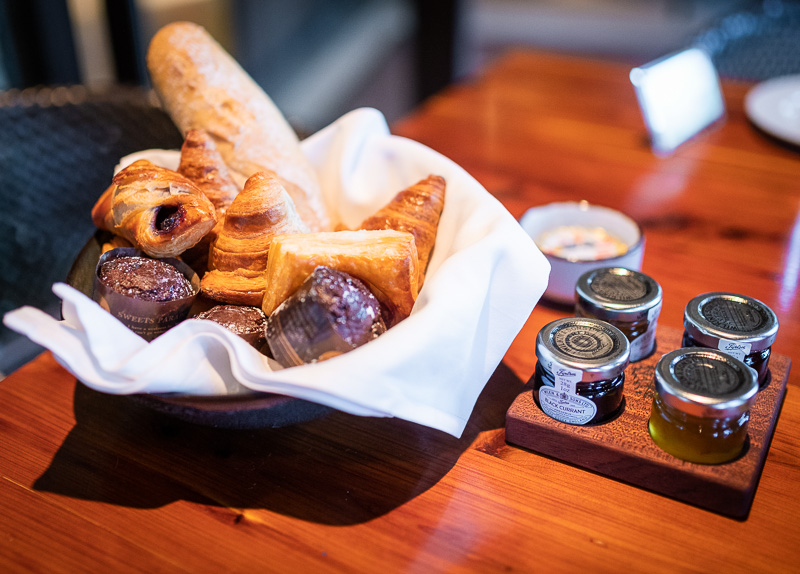 Here’s a look at the bakery basket, which included a variety of breads and muffins that were high quality and delicious. We loved the Sweets Paradise-branded chocolate muffins.

If we’re comparing this meal head to head against Topolino’s Terrace, which makes sense given the totality of circumstances, this is one point for Ravello with the superior bakery basket. 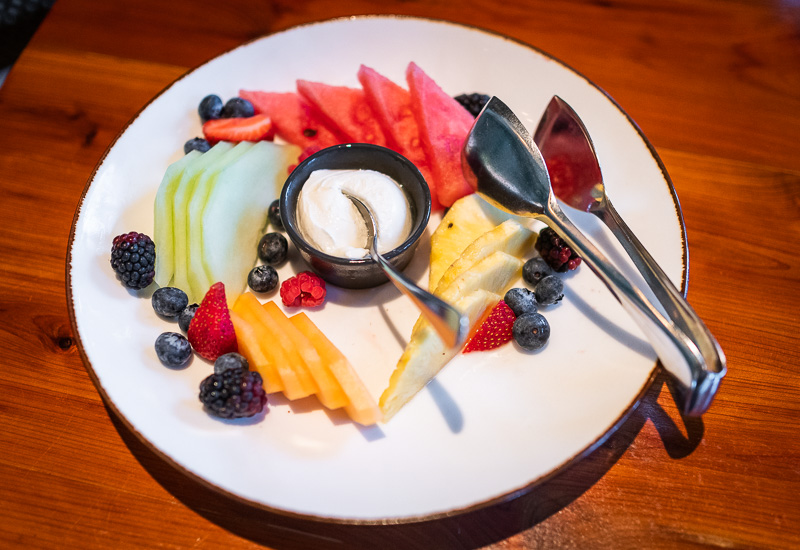 Next, a plate of sliced fruit.

This is something that Topolino’s Terrace does not bring out by default but it is one of the menu options and you can order multiples. Both offer a variety of fresh options. 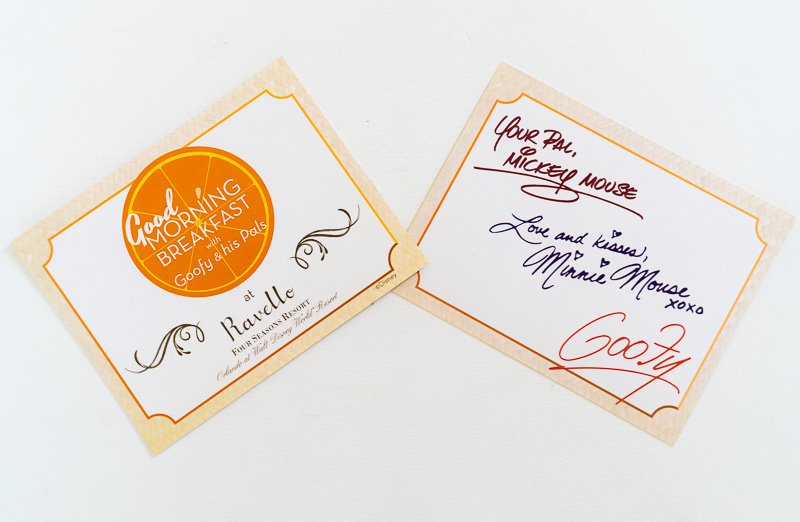 We opted to order what we felt were the most interesting options on the menu, which was likewise our approach at Topolino’s Terrace.

Both have had their options scaled back, with the most interesting items removed (in the case of Topolino’s Terrace) or been converted from an expansive buffet to a prix fixe menu (in the case of Ravello). 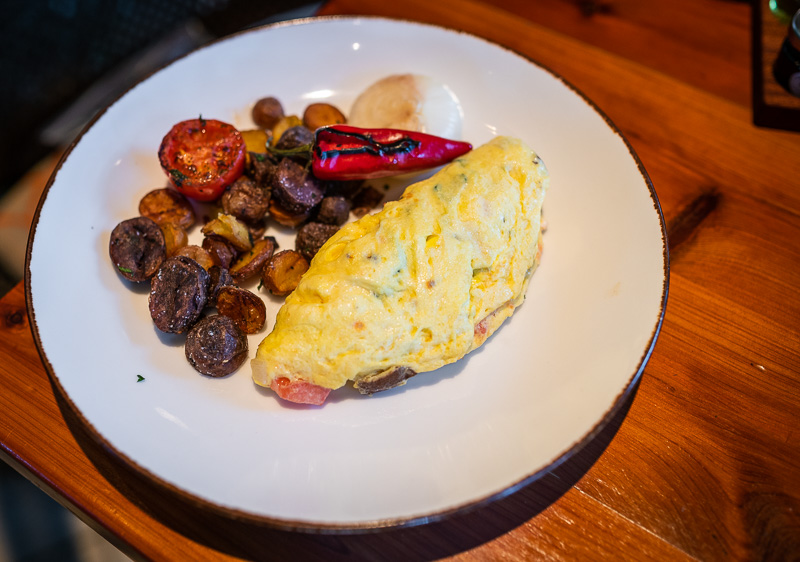 This looks fairly unassuming, but it had a great earthy flavor with the harissa providing some punch. I personally would’ve opted for the Three Pigs Omelet as this one lacked meat, but it was still good. 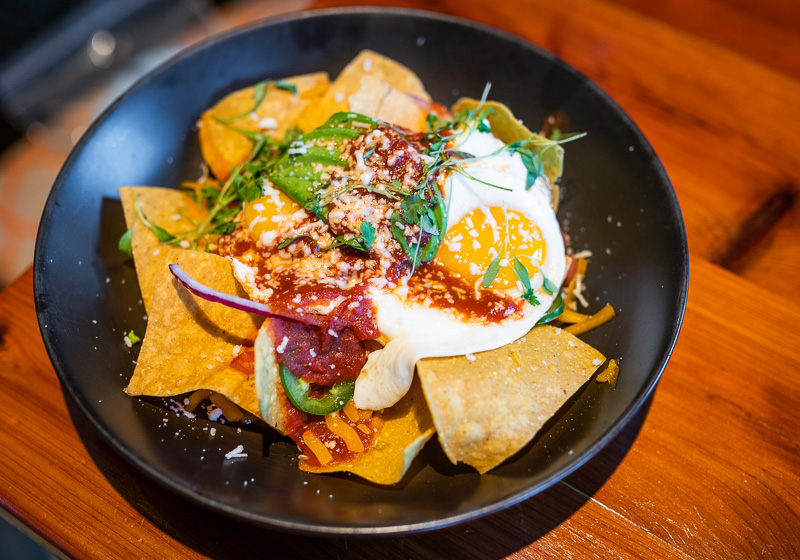 One of my favorite items on Disneyland character buffets that I really wish Walt Disney World would port over is chilaquiles, and this is essentially the upscale cousin of that. The toppings provided a refreshing flavor and mild kick, but there were too many crisp tortillas and too little of everything else for my liking. 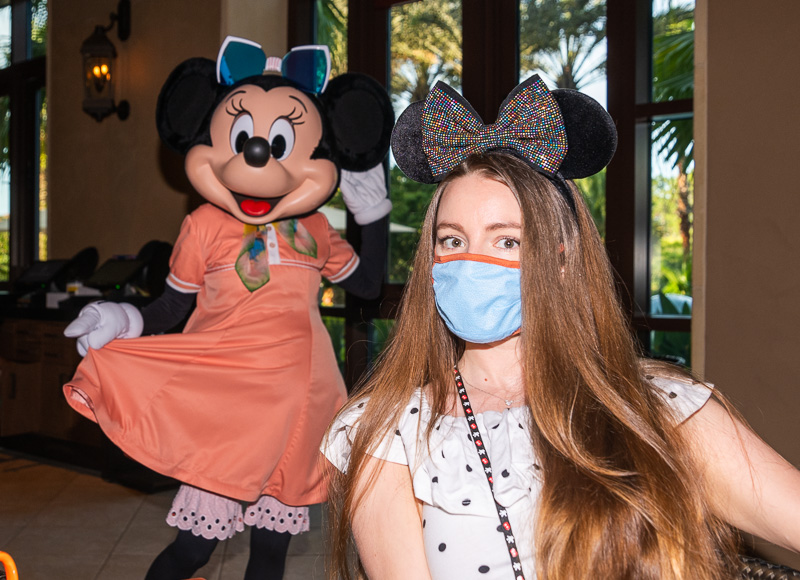 The cavalcade around Ravello was very similar to the one around Topolino’s Terrace. The main differences are that this has one fewer character and (in my opinion) costumes that aren’t nearly as good.

Once they realized that we were trying to get photos with them, each character dragged their toes and held for what we’d consider “moving choreography” near our table. Exact same idea as what we experienced at Topolino’s Terrace. 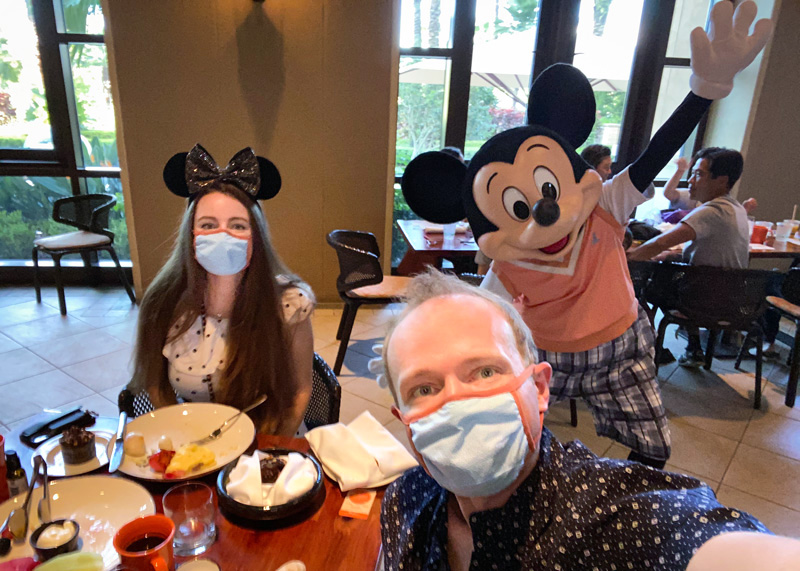 If you were trying to pose children for this–and we didn’t see any other tables try–it absolutely would not work. I had to be quick with the camera and phone, and even then, we had way more misses than hits.

Fortunately, there were 5-6 little cavalcades during the course of our meal, so we had plenty of chances to try. Even then, the above photo is the “best” selfie we captured, and it’s pretty horrible.

Part of this is poor luck. Even though we were on the terrace at Good Morning Breakfast with Goofy & His Pals, we were seated at a table against a dark wall–meaning all of our character photos were terribly backlit. Had we been seated at the table immediately behind Goofy in the photo above, our results would’ve been much better.

On a random and unrelated note, the Good Morning Breakfast with Goofy & His Pals music loop is composed entirely of Tokyo Disneyland songs. It’s a mix from retired and current shows, plus anniversaries–a lot of catchy music you won’t hear anywhere else at Walt Disney World. 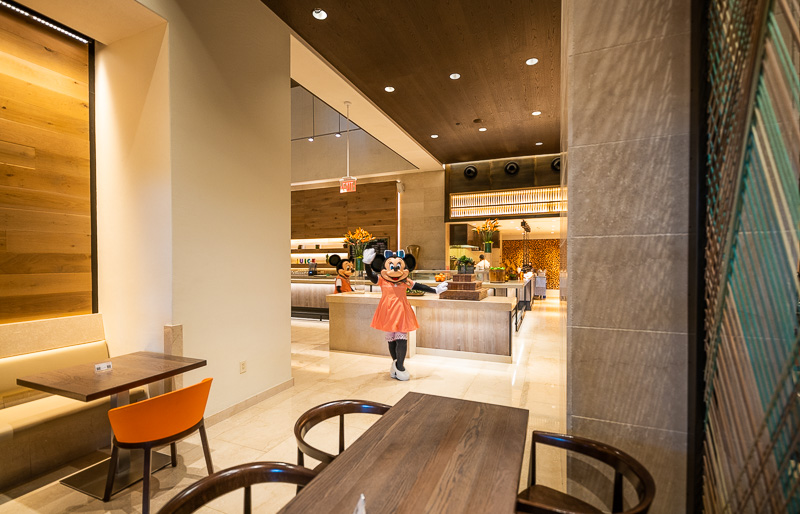 Ultimately, we enjoyed our experience at Good Morning Breakfast with Goofy & His Pals and would’ve been perfectly satisfied with the meal if we totally ignored the price we paid. Which is probably exactly what most guests of the Four Seasons Orlando are doing. If viewed through the prism of being an amenity offered to affluent guests on a rite of passage trip who are not really into the whole Disney thing, it’s a convenient option that fills a role.

For the vast majority of people reading a Walt Disney World-centric planning blog, Good Morning Breakfast with Goofy & His Pals is not going to pass muster. It’s too expensive, the menu options are unambitious, and the character component of the meal is inferior to its counterparts in other resorts and parks at Walt Disney World. The modified Topolino’s Terrace is better, and even that is still not going to be sufficient for many fans right now.

On the plus side, Ravello’s character breakfast does provide an opportunity to check out Four Seasons Orlando, which as a whole is an exceptional resort–far better than even the Grand Floridian. However, unless you want to visit this hotel, most ardent Disney fans should look elsewhere. That is, unless your family is such hardcore Walt Disney World fans that you’re “character completionists.” Then you might as well give Good Morning Breakfast with Goofy & His Pals at Ravello a try!

Have you done Good Morning Breakfast with Goofy & His Pals at Ravello? How do you think it rates as compared to other Walt Disney World character meals? What about its food and ambiance, in general? Would you book an ADR here just to check out Four Seasons Orlando? Planning on dining here? Do you agree or disagree with our advice? Any questions we can help you answer? Hearing your feedback–even when you disagree with us–is both interesting to us and helpful to other readers, so please share your thoughts below in the comments!