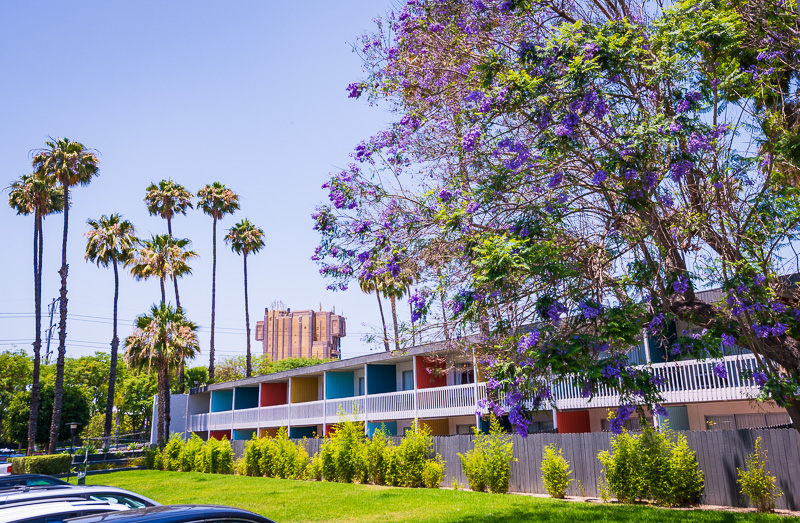 The Anaheim Hotel is the first place we ever stayed when visiting Disneyland over a decade ago. Back then, it was known as the Anaheim Plaza Hotel & Suites. It owns a “special” place in our hearts as the negative note of an otherwise exceptional first trip.

Honestly, I was fine with the idea of never revisiting this hotel. That was actually the plan back when we started working on our comprehensive Anaheim Hotel Reviews & Rankings several years ago, which was mostly a pragmatic decision. That’s because Wincome Group bought the 8.5 acre Anaheim Plaza Hotel & Suites in 2014, paying a record $47 million for the property. Wincome paid that not because the hotel is nice–the value is in the land–the plan was to tear down the underperforming property and replace it with a nearly $200 million luxury resort.

That’s exactly what Wincome Group has done elsewhere near Disneyland with the Anabella Hotel, which is now home to the brand-new Westin Anaheim Resort. The circumstances with the Anaheim Plaza Hotel were even more extreme–the land was more valuable since it’s closer to Disneyland and the existing hotel is even older, still using original guest room buildings dating back to the 1960s. Of course, the best laid plans of mice and men often go awry…

What has played out with the luxury hotel project slated for the Anaheim Plaza Hotel parcel is a fascinating story, but largely one beyond the scope of a hotel review. Suffice to say, it closely (almost identically) parallels Disney’s cancellation of its luxury hotel project a few years ago as unions put pressure on Anaheim politicians and the community soured on luxury hotel tax rebates as a result.

Wanting to make the most of things in the near-term, the developer spent some money enhancing the property and rebranding it as the Anaheim Hotel. However, the underlying land’s value (and the price paid for it) dictated the property would be redeveloped at some point. In essence, the Anaheim Hotel is a placeholder that could close in the near future.

In the last two years, Anaheim’s political pendulum has swung back in the favor of developers, including Disney and Wincome. Early last year, the latter once again received approval to do exactly that with a room tax rebate. It’s hard to say when that project will begin (probably not for at least a couple more years), but in the meantime, here’s what you need to know if you’re considering a stay at the Anaheim Hotel… 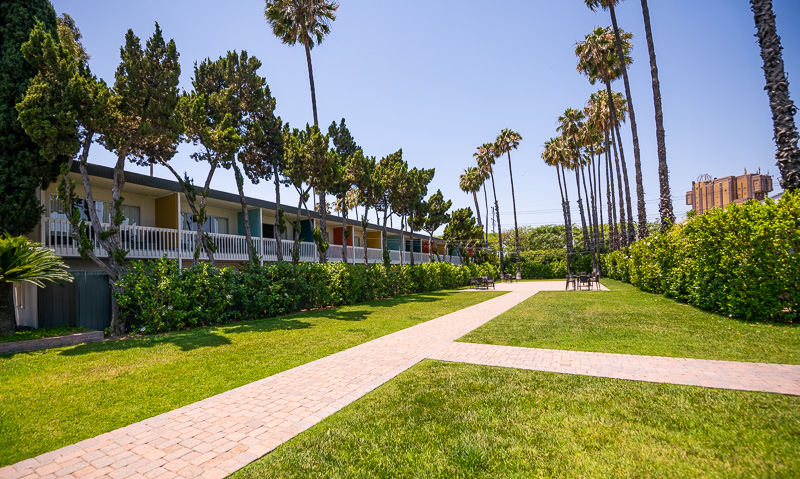 Let’s start with the positives, the biggest one of which is the Anaheim Hotel’s location.

Situated at the corner of Harbor Boulevard and Disney Way (on the other side of the intersection from Grand Legacy at the Park), and it’s only around a 10 minute walk from the hotel to the turnstiles at Disneyland. There are fewer than 10 hotels closer to Disneyland than this. The walk to the parks is shorter from here than from Disneyland Hotel. 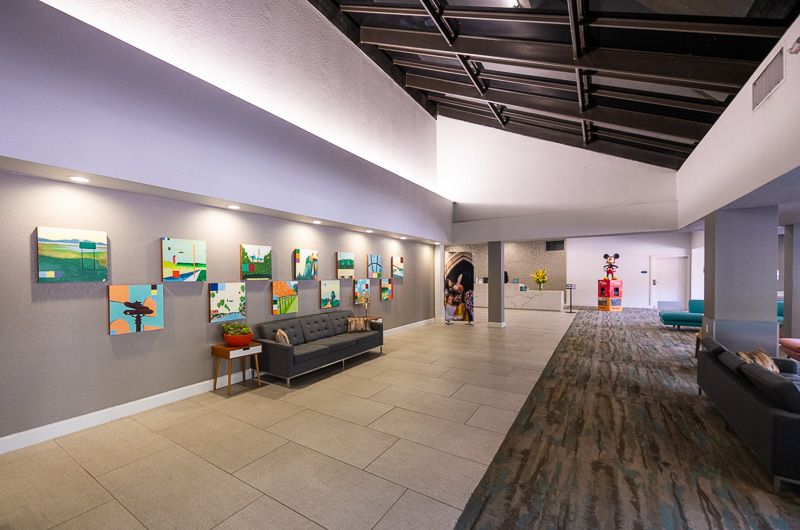 Price-wise, the Anaheim Hotel is also competitive. It’s often among the least expensive hotels in this area, with rates frequently below $150 per night.

As with all other hotels near Disneyland, prices fluctuate considerably. You should always do comparison shopping with comparable hotels in the area before booking. We recommend browsing the hotel + ticket vacation package via Get Away Today to save money. In addition to the package discount, some hotels have ‘4th night free’ promos. 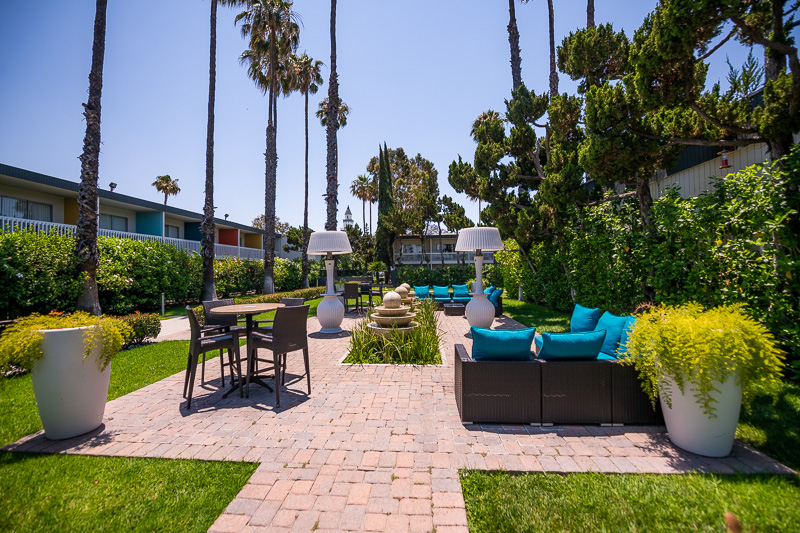 The grounds of the Anaheim Hotel are also nice and expansive, which is something you won’t find at many hotels near Disneyland. As noted above, the sale of this hotel was a record-breaking real estate deal, and that’s because of the size of the property.

If you want space for outdoor activities, I can’t think of a single hotel in the area that has the Anaheim Hotel beat. There are plenty of lounging locations, plus lawn games and more. 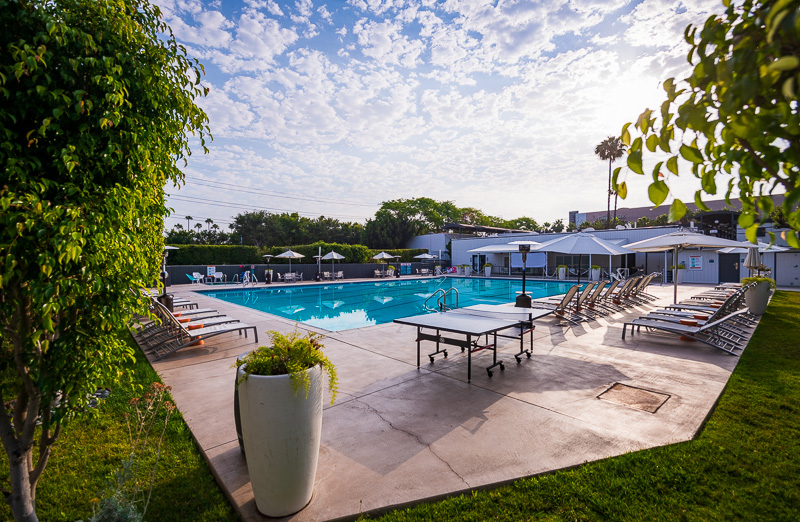 Speaking of which, there’s also an Olympic sized swimming pool, which the hotel claims is the largest in the Anaheim Resort District.

Hotels near Disneyland are notorious for underwhelming pools, and this definitely bucks that trend. While it might technically be the largest pool, the Howard Johnson and Courtyard Theme Park Entrance both have sizable “water park” areas that I’d rank above this. 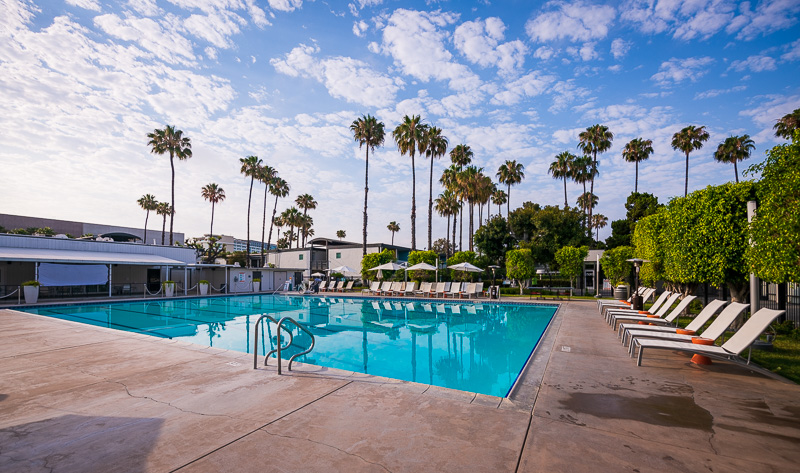 Nevertheless, the Anaheim Hotel’s pool area is huge and better than 90% of the options in the area.

It’s also packed with people. The photos here were taken before it opened for the day–on the days we stayed here, it was absolutely hoppin’, with every seat filled, a DJ playing loud music, games around the pool deck, and all sorts of other shenanigans. Not our scene. 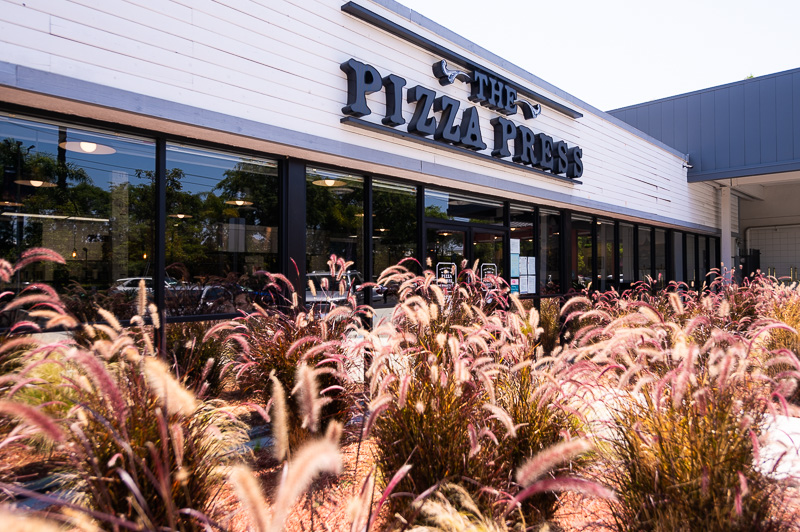 Another highlight of the Anaheim Hotel is that Pizza Press is located in its lobby.

We’re big fans of Pizza Press; it’s the perfect meal after a long night in the parks, good to enjoy during a midday break, etc. Having it at your hotel is definitely nice. (I’m not sure if Pizza Press is nationwide, but it’s the same idea as Blaze Pizza–which is also located just down the road.) 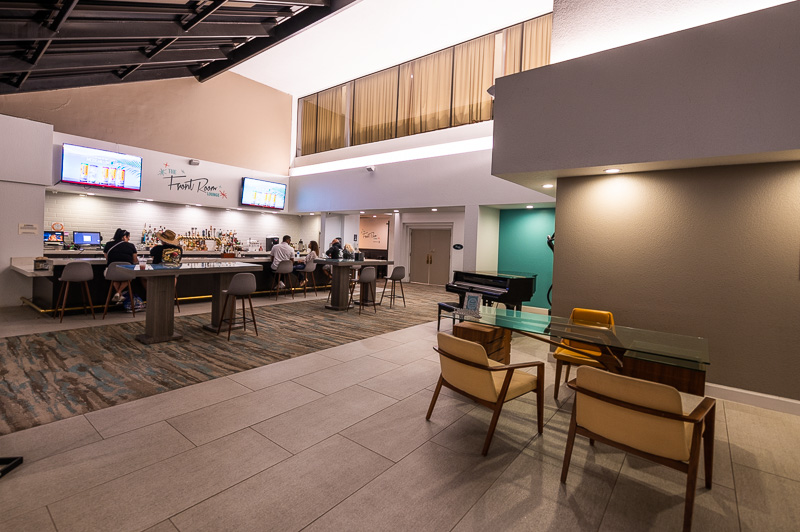 Around the corner from Pizza Press is the Front Room Lounge, which is a full service bar that doubles as a spot to buy breakfast. Pool service and room service are also available at the Anaheim Hotel, all of which are pretty uncommon for a budget motel near Disneyland.

The Anaheim Hotel also a 24-hour fitness room, meeting & event space, business center with printing capability, on-site ATM, electric vehicle charging stations, laundry room, and pet-friendly rooms with designated outdoor pet areas. Honestly, a lot of these offerings feel like “checklist” amenities that are offered to qualify the Anaheim Hotel for a higher star rating than it might otherwise earn. 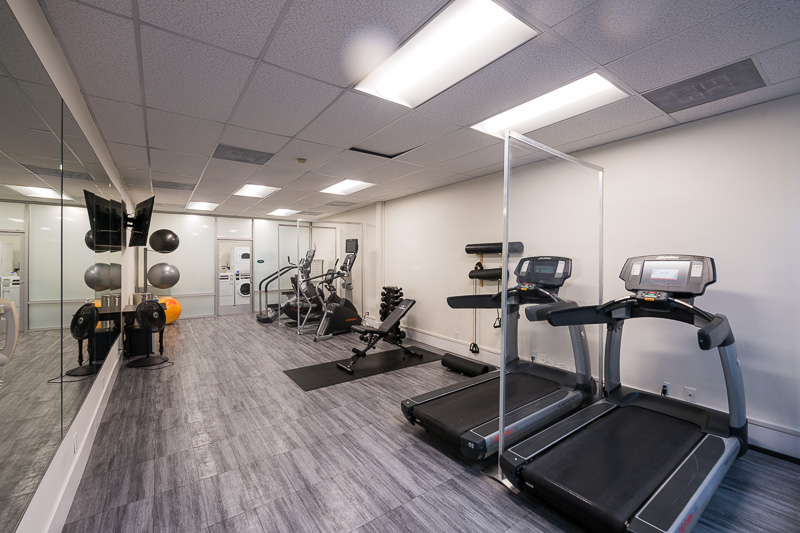 On that note, the Anaheim Hotel has received AAA’s Three Diamond Award. This is fairly surprising given the hotels in Anaheim that have not received such a distinction. I don’t care what AAA thinks, this is not a Three Diamond Hotel. That’s just absurd–this is a 3-star motel.

Even though the Anaheim Hotel received millions of dollars in upgrades when it was converted from the Anaheim Plaza Hotel, most of this was cosmetic. There’s a lot that could fairly be described as lipstick on a pig. 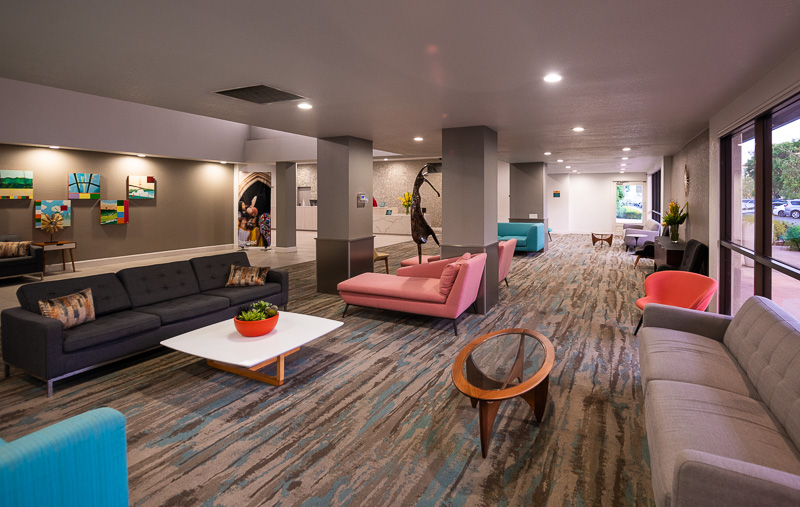 Finally, the staff and service at the Anaheim Hotel are not what you’d expect from a budget motel. We had numerous interactions with the front desk and other employees of the Anaheim Hotel, and all were incredibly professional, polite, and knowledgeable.

More on par with one of the nicer Hyatts or even the JW Marriott than the other motels in the area. It feels like Wincome has staffed the Anaheim Hotel with the expectation that they can relocate some of these employees to its other new luxury properties. 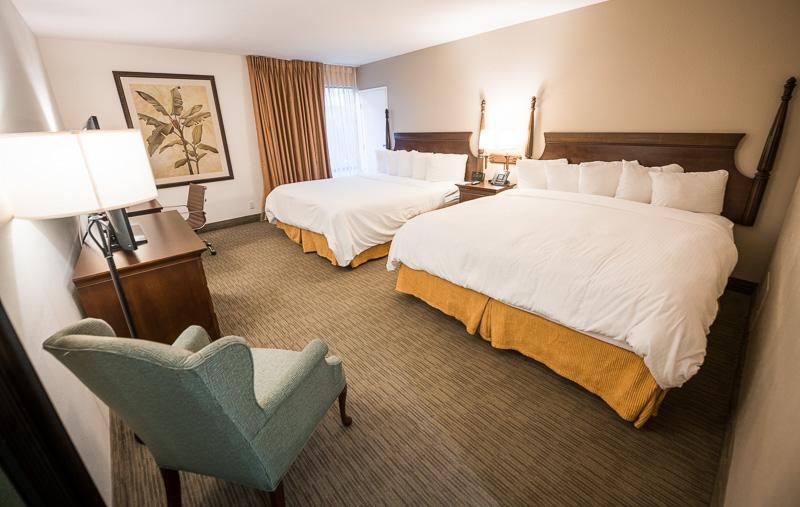 The rooms are the biggest negative of the Anaheim Hotel. They’re dark, dreary, and dated.

These overexposed photos don’t do the room proper justice (or lack thereof), but it bears emphasizing just how little light, natural or artificial, they offer. Our room was on the ground floor and did not have a patio–just the one window. Other rooms have outdoor seating, and higher level rooms have balconies. 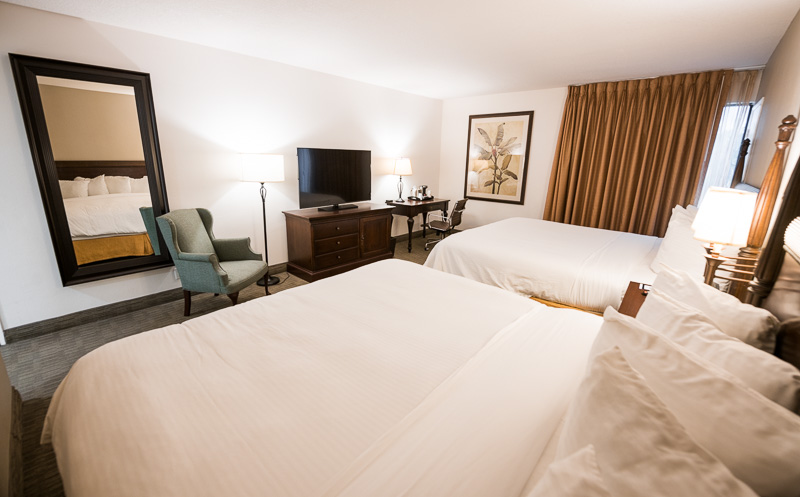 We’ve stayed at a lot of hotels in Anaheim of different eras and price points, and the overall atmosphere of these rooms puts them in the bottom 15%. Even most of the older motels in the area, like Park Vue Inn or Desert Inn, are much better in this regard. (Castle Inn has darker rooms, but that’s by design since it’s going for a gothic vibe–so not at all comparable.)

It also didn’t help that our door’s room key reader stopped working halfway through our stay and maintenance couldn’t figure out how to fix it. The “solution” ended up being aggressively jiggling the panel until it started working. 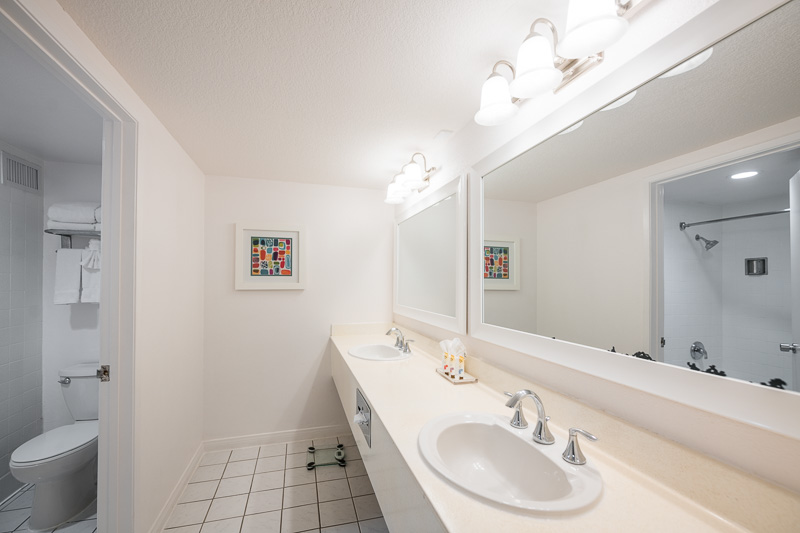 Our room was the “Executive King King” category. the Executive and Deluxe rooms all seem similar in their lack of balcony or patio. I wouldn’t even consider booking this type of room in the future.

The hotel’s website indicates these rooms have “been renovated with new carpet, furniture, and upgraded fixtures” and “refreshed bathrooms.” Perhaps that’s true, but these seem very similar to what we stayed in back when this was the Anaheim Plaza Hotel over a decade ago. Either they were renovated a few years ago to a dated style and have been poorly maintained since, or they were updated ages ago. Regardless, they’re tired. 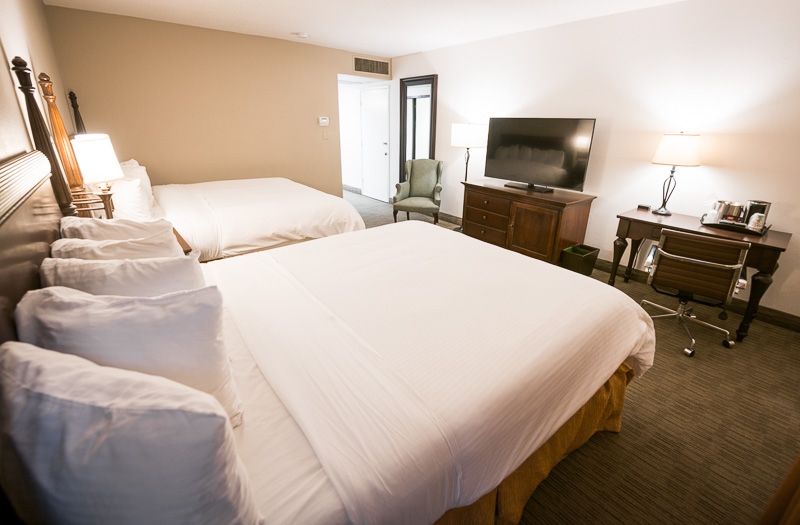 Moreover, our room was located in the far back corner of the hotel complex, down a dark and noisy lower level corridor with overflowing trash cans. That’s the flipside of the larger grounds–there are a ton of guest room buildings and a labyrinth of hallways.

With that said, the bedding and pillow top mattresses were incredibly comfortable, and the room was spacious. Size-wise, these are among the larger standard motel rooms near Disneyland (but not bigger than any of the family suites). Our experience with the room wasn’t entirely negative–we’ll end on that positive note! 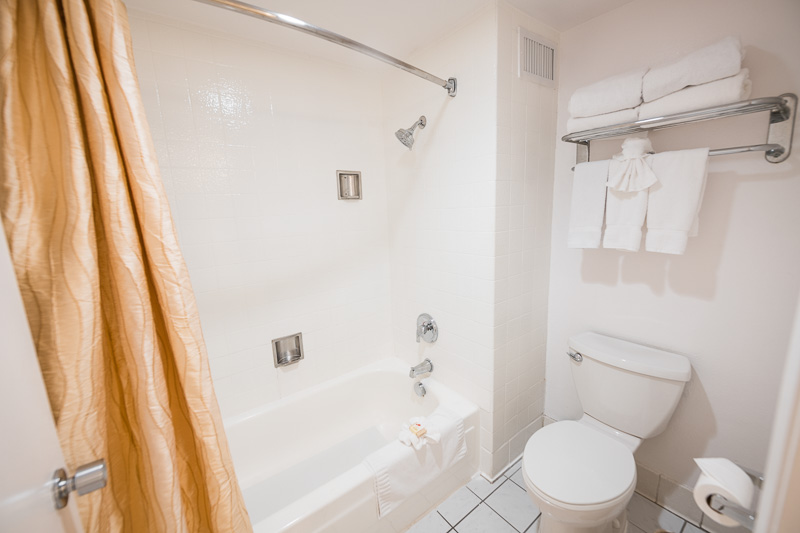 Ultimately, the Anaheim Hotel has me torn. Coming at it from an objective or checklist perspective, I can see the appeal of its amenities, location, grounds, and more. Many families visiting Disneyland will undoubtedly find this to be a great fit that works very well for them. Especially those who will spend little time in their room, prefer the extra space, and/or be fine with the barebones quality and darkness.

Subjectively, we did not like the Anaheim Hotel at all. Several of its features were not things that we needed, and even the amenities it does well are done better by other hotels. Then there’s the quality of the rooms, which leaves a ton to be desired, even at this price point. In the end, the Anaheim Hotel reminds me a lot of Candy Cane Inn–another motel that has a loyal following, but in my opinion, is well past its prime. Time has passed by the Anaheim Hotel in the last decade, and there are now a couple dozen newer and more modern hotels all around Anaheim. Perhaps the selling points–and there are some valid ones–will appeal to you, but it’s impossible for me to actively recommend the Anaheim Hotel given the alternatives.

Have you stayed at the Anaheim Hotel? What did you think of the guest rooms, pool, dining, or other amenities? Would you stay here again? If you haven’t stayed at the Anaheim Hotel, do you plan to do so in the future? Do you agree or disagree with our assessment? Any questions? Hearing your feedback—even when you disagree with us—is both interesting to us and helpful to other readers, so please share your thoughts below in the comments!

20 Responses to “The Anaheim Hotel Review”