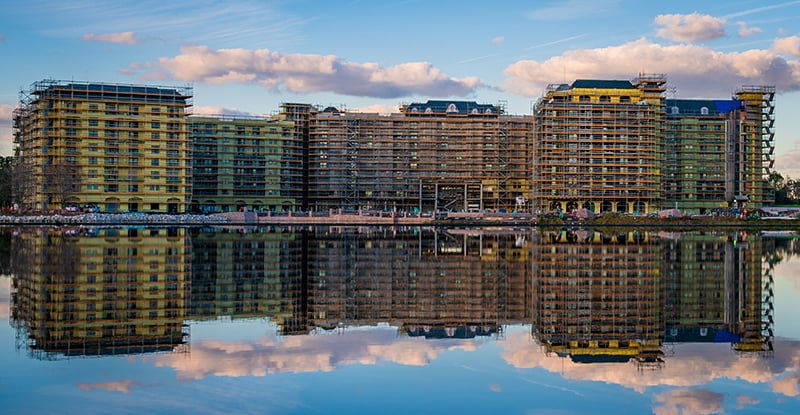 We head back to the Riviera Resort DVC development as we continue our January 2019 Walt Disney World construction updates for photos of the new Disney Vacation Club hotel being built on the shore of Barefoot Bay across from Caribbean Beach.

It’s been a few months since we last posted an update on progress at Disney’s Riviera Resort, and that’s because we haven’t seen a ton of progress on the resort during our visits to Caribbean Beach. In this case, I was already taking photos for tomorrow’s Caribbean Beach Resort update, so we were in the “neighborhood” even though a ton hasn’t changed.

One thing that has changed–or rather, will change–is how some DVC members will be able to use points at the Riviera. If you haven’t already, we’d strongly encourage you to read this week’s news of Major Restrictions Being Introduced for Disney Vacation Club, which will disproportionately impact Disney’s Riviera Resort. If you’re thinking about buying at Disney’s Riviera Resort, it’s imperative that you read that first.

That indirect news aside, few details have been unveiled about the actual resort. We have the basic info in our Disney’s Riviera Resort Coming to Walt Disney World post and more recently, Disney released a new piece of concept art (below) and provided this additional information:

“This proposed 15th Disney Vacation Club property, projected to open Fall 2019, is inspired by the European grandeur Walt Disney experienced in his travels along Europe’s Mediterranean coastline. Disney Vacation Club Members and other guests will have a great view of fireworks spectaculars and easy access to the Disney Skyliner, which will have a station at the resort.

In 1935, not long after Mickey Mouse was born, Walt took a break from the production of Snow White and the Seven Dwarfs. Walt & Lillian and Roy & Edna Disney took an extended grand tour of Europe that would have an impact on Disney storytelling for decades to come. With its castles and colorful, fairy-tale villages, Walt fell in love with Europe — the art, the architecture, the food, and, of course, the stories.” 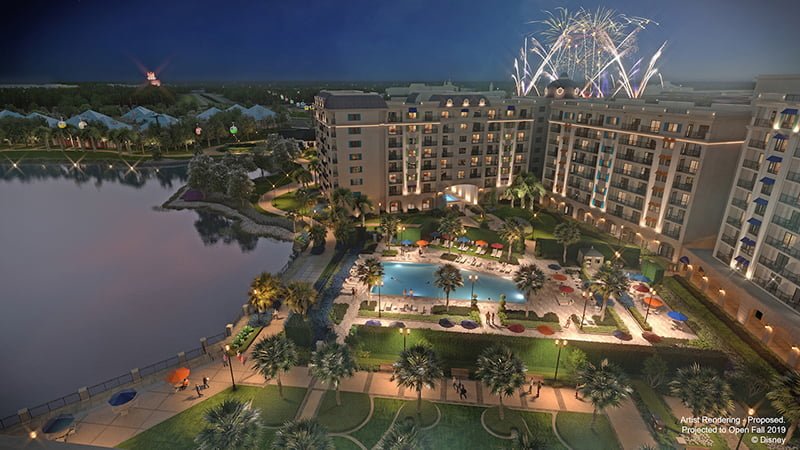 About the only thing this tells us that we didn’t already know is that the Riviera will have at least one pool that is boring.

Earlier this week, Disney Vacation Club released the “video” below. We’re playing fast and loose with the term video here–it’s basically just one piece of concept art plus what might be the logo:

In addition to Caribbean Beach and Disney’s Riviera Resort, we also visited Coronado Springs on the same day, and seeing Gran Destino immediately before Riviera reinforced just how different the two are in design.

While both are towers, Riviera is a few stories shorter, wider, and more offset from existing development. Those distinctions might seem minor, but they make a world of difference when viewed in person. At least, they do to me–then again, perhaps I’m just a Caribbean Beach fan in denial about the changes. 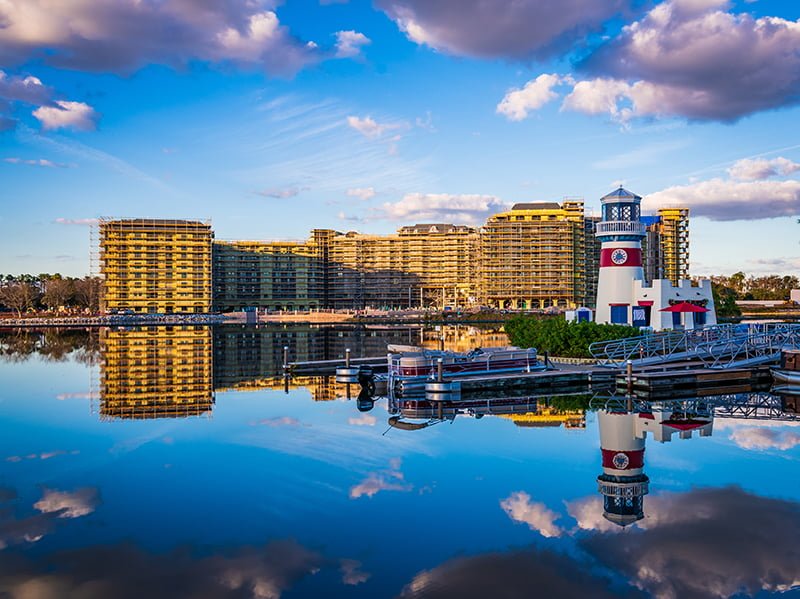 The scale is definitely not the same between Caribbean Beach and the Riviera, but it’s not worlds apart, either.

I’m cautiously optimistic that when all is said and done, the Riviera won’t look like an out of place eyesore from Caribbean Beach’s shores…it’ll just look like the Grand Floridian when viewed from the Poly. Time will tell on that, though. 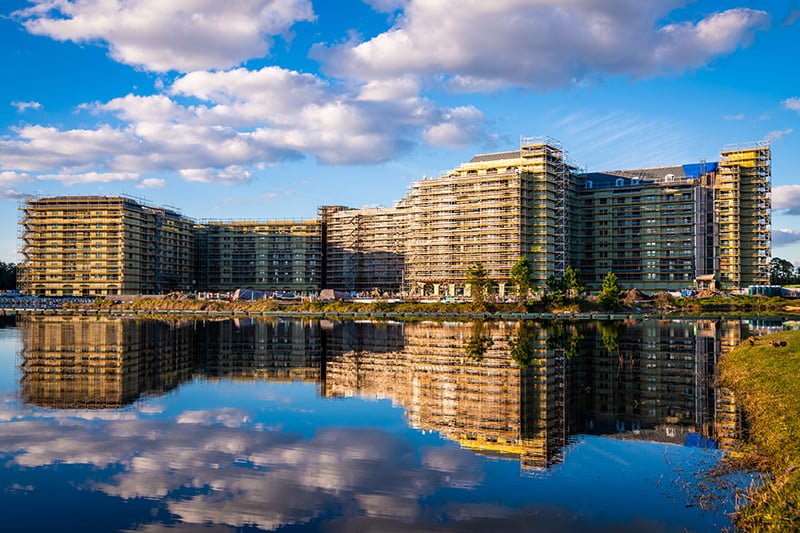 Here’s the view from the shore in Martinique.

This area of Caribbean Beach and Aruba are the most impacted by construction in terms of seeing and hearing the work, but it’s visible from just about everywhere. The one exception is Trinidad, and it’s just as construction-y over there due to Skyliner construction, so it’s a ‘pick your poison’ kind of scenario. 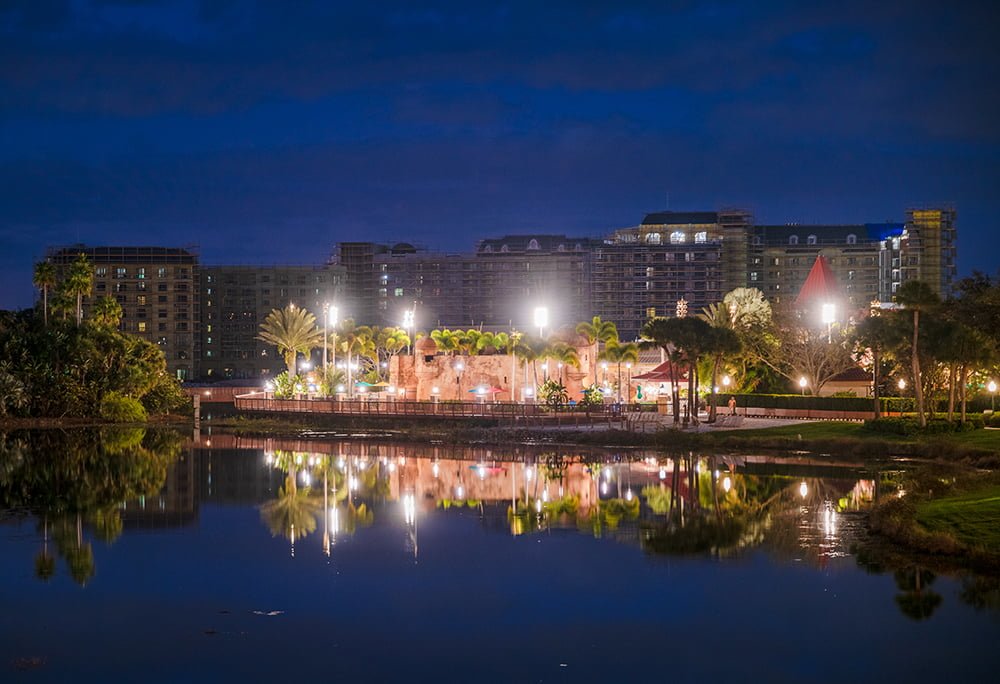 Here’s a look at the construction from more of a distance…and at night. In the middle of the frame is Fuentes del Morro Pool and Caribbean Cay, pretty much directly in line with Riviera Resort.

This really doesn’t offer much insight into construction, I just thought it was a cool view so I set up on the bridge for a longer exposure. 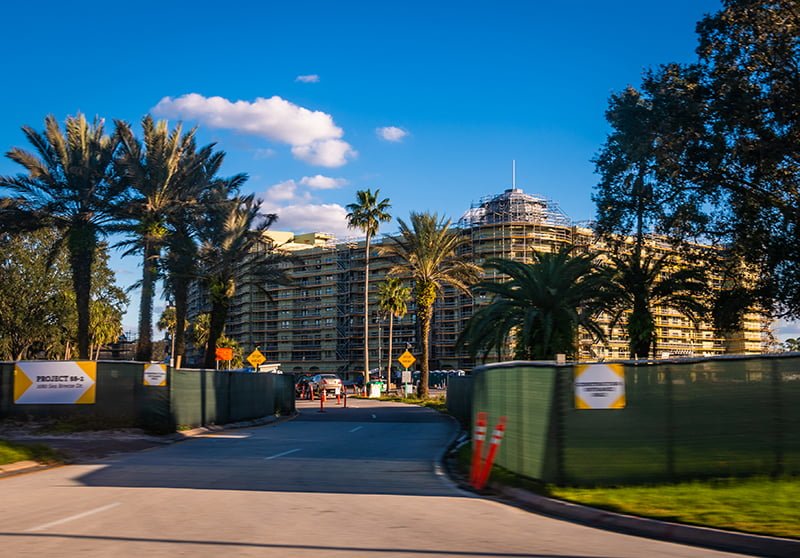 Now that the building is topped out, flourishes are being added to give the exterior some personality. The photo above was shot from a moving vehicle passing what used to be the entrance to Caribbean Beach Resort.

There are a couple of rotundas, and the mansard roofs are taking shape. You’ll note from the photo below that this is punctuated by dormer windows, some of which are round (left) and some of which are square (far right). 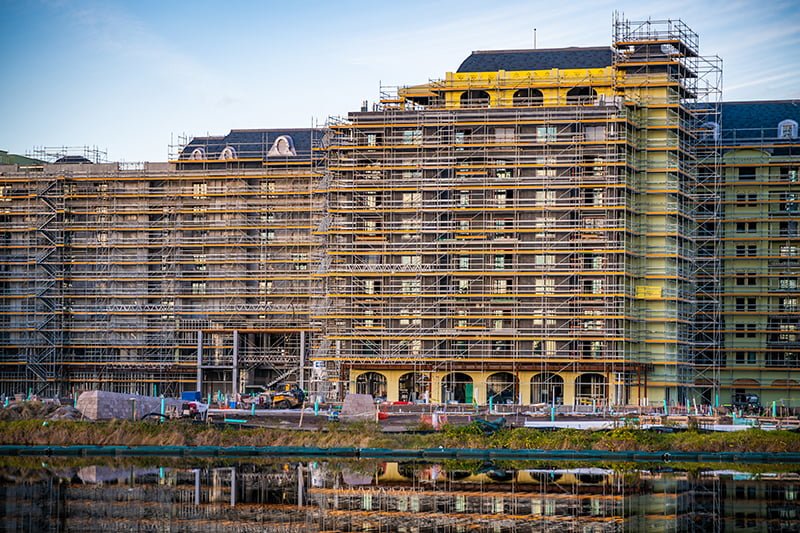 It’s really too bad Disney doesn’t plan on taking this a bit further. Going all-in on the French chateau look would be good move.

With a bit more weathering and a bit of baroque styling (think Epcot’s International Gateway buildings), they could’ve been onto something. Imagine this as Chateau d’Isigny Resort; it wouldn’t have cost much more to construct and would’ve appeased those who love themed design as well as those who just want a classy place to stay. If this were something that looked like a chateau in the Loire Valley, I’d certainly be more inclined to buy at Disney’s Riviera Resort.

Have any thoughts about Disney’s Riviera Resort? Planning on buying points here or not? Does the new resale restriction make you less likely to buy at Riviera? If not, what’s your per point max cost for Riviera? Is this tower-style location with Skyliner access to Disney’s Hollywood Studios and Epcot attractive to you? Any questions we can help you answer? Hearing your feedback is both interesting to us and helpful to other readers, so please share your thoughts below in the comments!