The S.S. Columbia Dining Room is located onboard the eponymous ocean-liner in the American Waterfront port of call at Tokyo DisneySea. It’s considered one of the flagship (that’s awful pun #2,573 on this blog, for those keeping score at home!) restaurants at Tokyo DisneySea, along with Magellan’s. Certainly, they’re the two most expensive restaurants in the park. Prior to our first trip to Tokyo Disney Resort, we decided to do a few table service meals at restaurants that were highly regarded, and the S.S. Columbia Dining Room fit the bill.

Price-wise, the S.S. Columbia is not that bad, which is pretty consistent with other Tokyo Disney Resort in-park table service restaurants, even the ostensibly “fancier” ones. Although the S.S. Columbia Dining Room is frequently cited as one of the most expensive at Tokyo Disney Resort, the bill for all four of us ended up being only $192, and we had appetizers, entrees, and desserts.

Thematically, the S.S. Columbia Dining Room is styled with an elegant Art Nouveau look. It definitely has strong elements of Art Nouveau, but overall it felt to me less like a luxury ocean-liner (like the Disney Dream cruise ship) and more of a cross between the Grand Floridian and Crystal Palace in the Magic Kingdom due to the color palette used throughout.

Sarah liked the style of S.S. Columbia Dining Room more than I did, and other people seem to like it, so if you’re planning a trip, you might want to read more about this restaurant before writing it off. At the very least, having dinner aboard an ocean-liner is a cool experience in itself (I kept looking around for Kate Winslet and Leonardo DiCaprio during our meal), although I think the Teddy Roosevelt Lounge is the much better option for that. 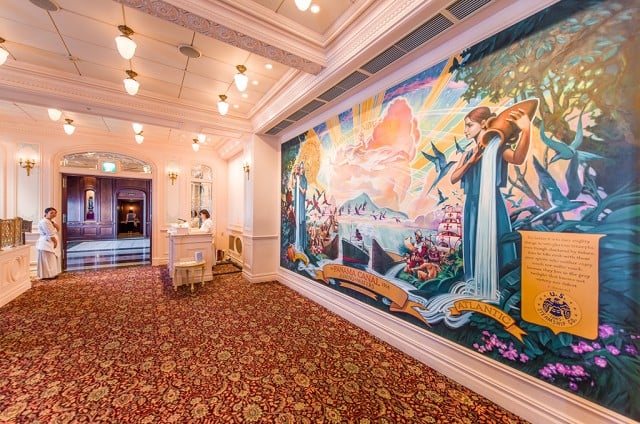 I’m not suggesting that it’s not a faithful representation of Art Nouveau (it is), but the particular depiction of the style just didn’t work for me in the S.S. Columbia Dining Room.

That’s entirely a personal thing, though. Many others love the Art Nouveau style of the S.S. Columbia Dining Room. 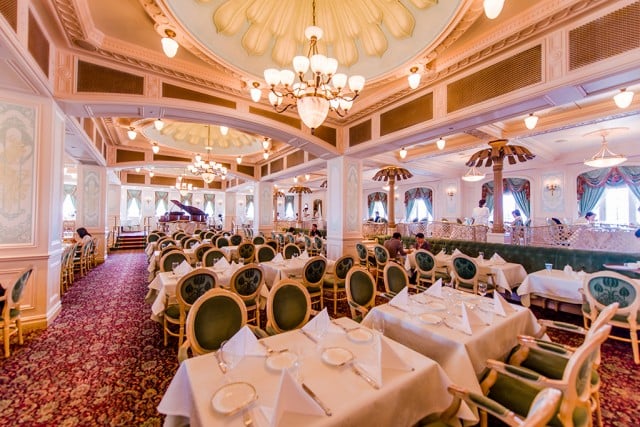 To be sure, it’s a very elegant restaurant, which is reinforced not only by the elegant place-settings, upholstery, and decor, but also by the fact that there’s a pianist playing (see the far wall of the photo above).

Maybe my opinion of the restaurant would be higher if we were seated next to the piano. 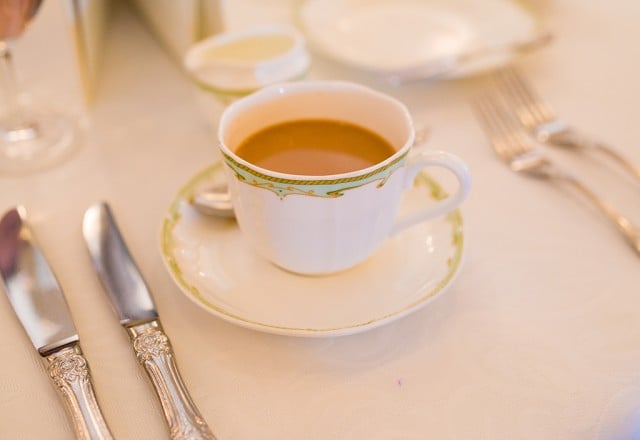 I think almost all of us ordered the Chef’s Special Sets that were available for the 30th Anniversary. Each of these consisted of bread, an appetizer, entree, dessert, and coffee or tea.

These are mostly just normal menu items combined as a set, so don’t worry if you’re not visiting during the anniversary celebration. 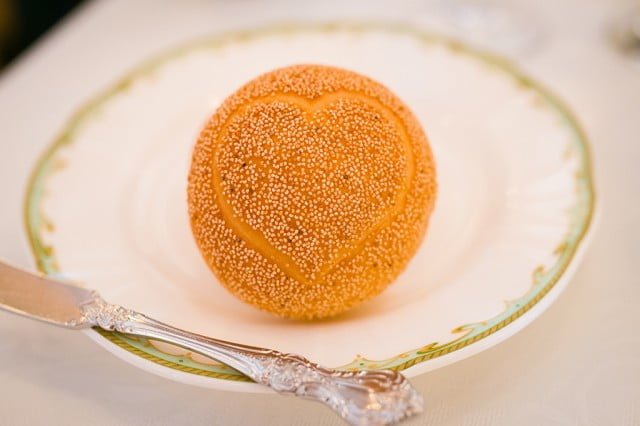 Here’s the bread we got to start. Notice the hard shape on it? The bread itself was only okay, but scored serious ‘kawaii’ points. 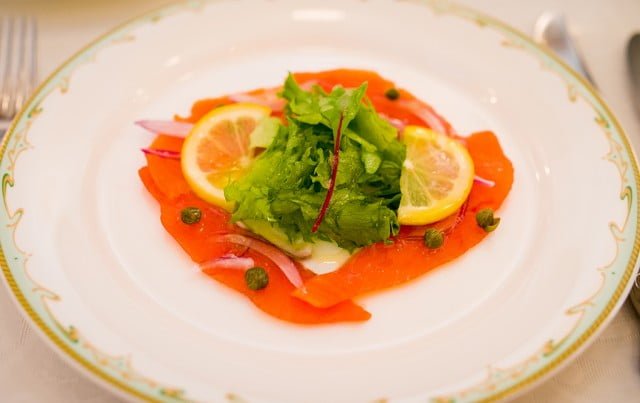 For my appetizer, I ordered what was essentially a smoked fish salad. Pretty good stuff. 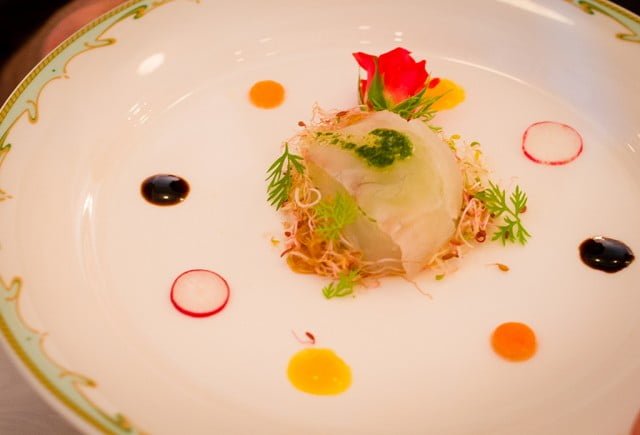 Some sort of salad-thing. Not sure who ordered this. 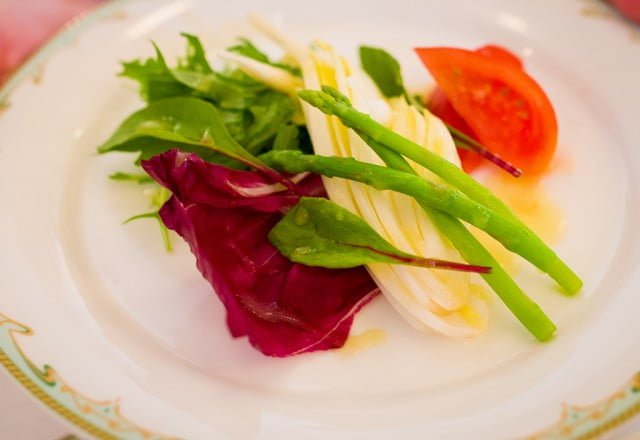 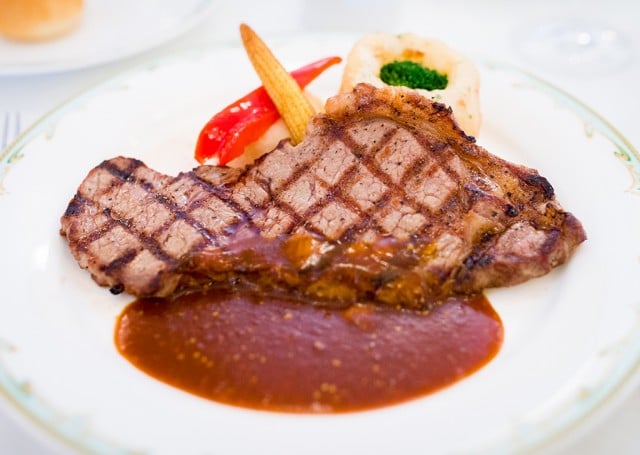 I had the S.S. Columbia “Selected” Sirloin Steak with mashed potatoes and seasonal vegetables. My steak was flavorful and perfectly cooked, but I prefer thicker steaks. In hindsight, I probably would have been better off ordering seafood since that seemed to be their specialty. 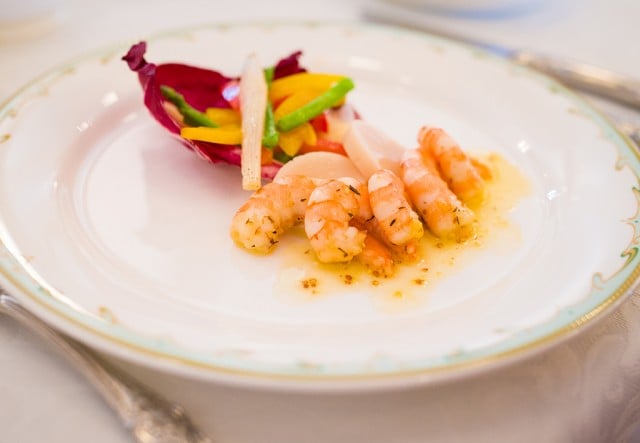 This is a shrimp entree–I’m not really sure of the name. This struck me as being really small. 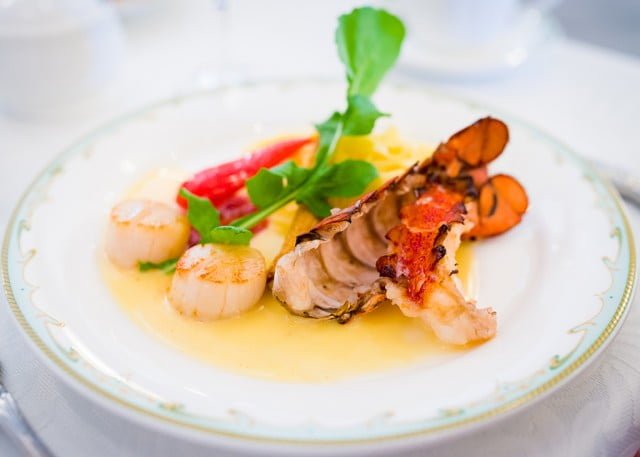 Here’s the Baked Lobster Tail with Sauteed Sea Scallops in Butter Sauce that Sarah had. She’s a big fan of lobster tail, and really liked this entree even though it, too, was on the small side. 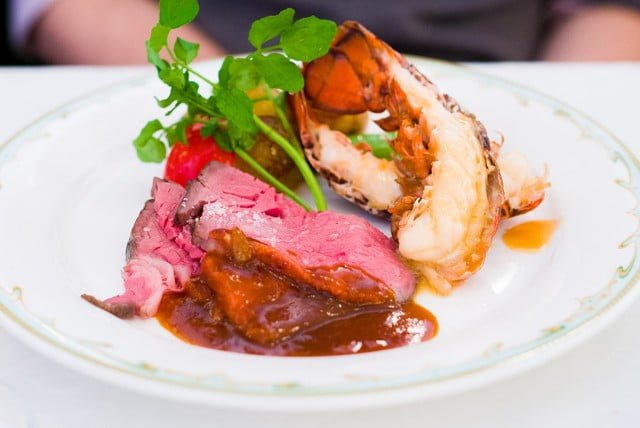 Our friend Henry had the Roast Beef and Baked Lobster Tail for his entree. There were varying tiers of special sets, and he got the highest/most expensive one.

I can understand why it was more expensive, as this entree seemed like the best of both words, like a large portion of roast beef and a full lobster tail. If we go back, this is what I’d order. 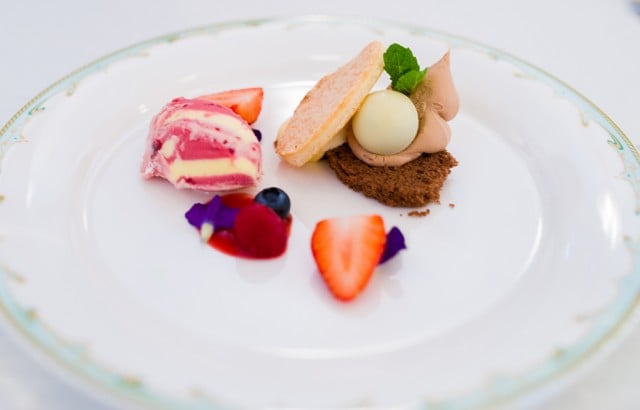 Both desserts were essentially samplers with small portions. This one was primarily gelato and fruit. 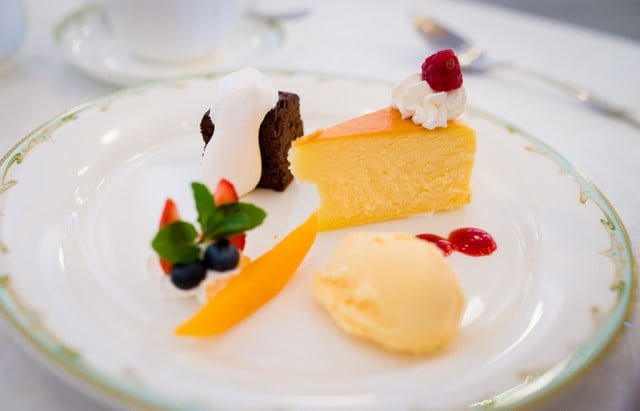 The other option had mango cheesecake, some gelato, and I don’t recall what else. This was definitely the more sizable of the two dessert samplers. 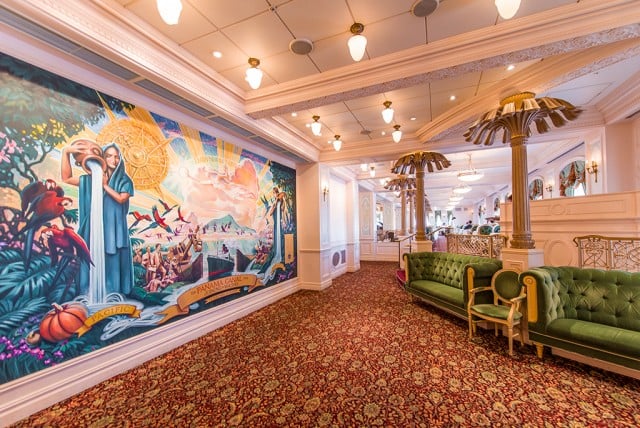 Overall, I can’t say I’d eat at the S.S. Columbia Dining Room again unless we were Tokyo Disney Resort locals and wanted to give it a second chance. The meal by no means was bad, but the ambiance just fell flat for me. The meal was good and the service was great, but we found our meals to be good and service to be great virtually everywhere we dined at Tokyo Disney Resort, so that isn’t exactly high praise, comparatively speaking. Since most other restaurants also had exceptional thematic design, being unimpressed by the design was a big blow to the restaurant for me.

Have you dined in the S.S. Columbia Dining Room? What did you think of it? What do you think of the Art Nouveau style? If you haven’t been to Tokyo DisneySea, is this a restaurant that interests you? Any questions? Hearing feedback about your experiences is both interesting to us and helpful to other readers, so please share your thoughts below in the comments!