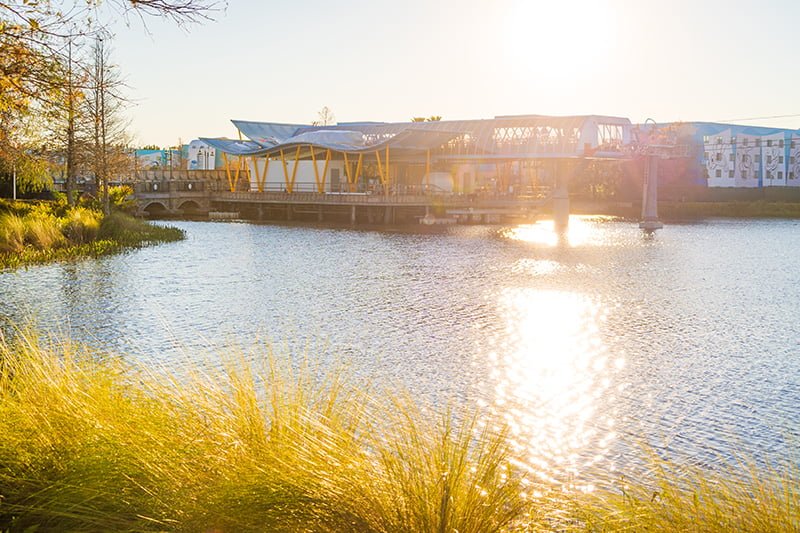 We continue our January 2019 Walt Disney World construction updates with current progress reports on every single Skyliner gondola station: Art of Animation/Pop Century, Hollywood Studios, Epcot, Caribbean Beach, and Riviera Resort. We also have a look at one of the actual gondola cars in place at the station, commentary, and more.

The Disney Skyliner has already received a ton of attention in past posts, and we have a lot of ground to cover here, so we’re not going to rehash all the basics. Whatever background you need to know about the system is in our Skyliner Announced for Walt Disney World post.

For our thoughts on the impact to sight-lines around Walt Disney World, see our Summer Skyliner Construction Update. For those who are concerned about the lack of air-conditioning in the gondolas, see our Fall Skyliner Construction Update, which spends a lot of time addressing these concerns and complaints, and why the lack of A/C isn’t a big deal to us…

Anyway, on with the Disney Skyliner station construction photos. We’ll start at Art of Animation and Pop Century, as it has been a really long time since we’ve done an update from these two resorts.

Progress on this station is incredibly far along, to the point that if you told me it was opening next month (it isn’t–this is just a hypothetical), I’d find that totally plausible. 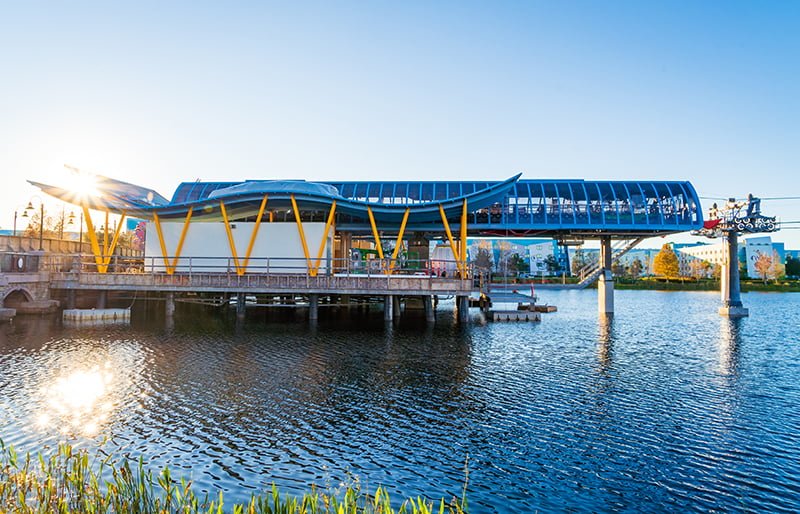 Is there any doubt that this is the best integration of the Skyliner of the bunch?

The Disney Skyliner will serve two hotels here, yet is not a prohibitive walk from anywhere at either resort. The wavy station design is simple, but works with both resorts (probably because they’re also fairly simple design-wise, but still). The route of the gondolas is entirely over the water, and rather than visually detracting from either resort, it’ll add a nice kinetic energy and be something cool to watch from the waterfront walkways. 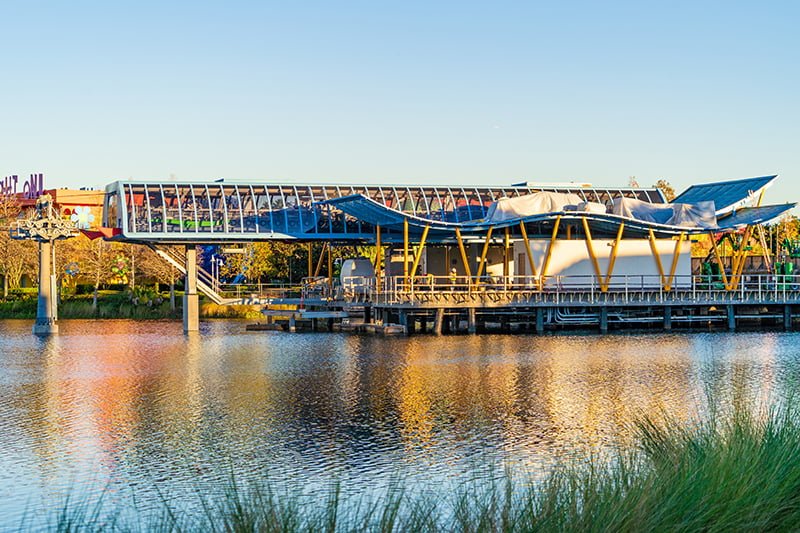 It’s almost as if the entire Skyliner project was designed around Art of Animation and Pop Century, and shoehorned in everywhere else.

To be clear, I don’t think that’s actually the case. The Skyliner is just such an organic fit here that it seems that way. 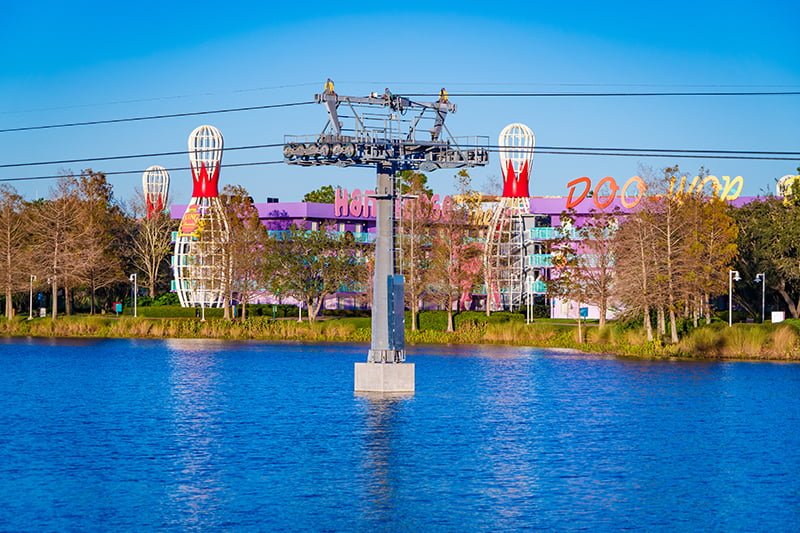 The biggest potential ‘weakness’ of the Skyliner at these two resorts is the demand versus capacity.

These are two incredibly large hotels that frequently operate near full occupancy, which means there’s going to be a line at this station during the morning ‘rush hour.’ 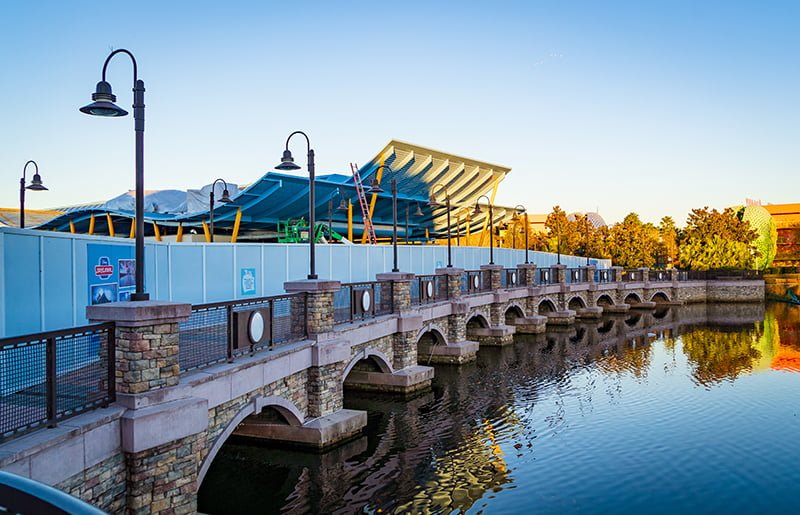 With that said, anyone who has ever stayed at either resort has probably experienced huge lines for the buses in the morning, so it’s not like that will be anything new.

Personally, I’ll take the constantly-moving line of the gondola over the bus line, which can be excruciating and frustrating. 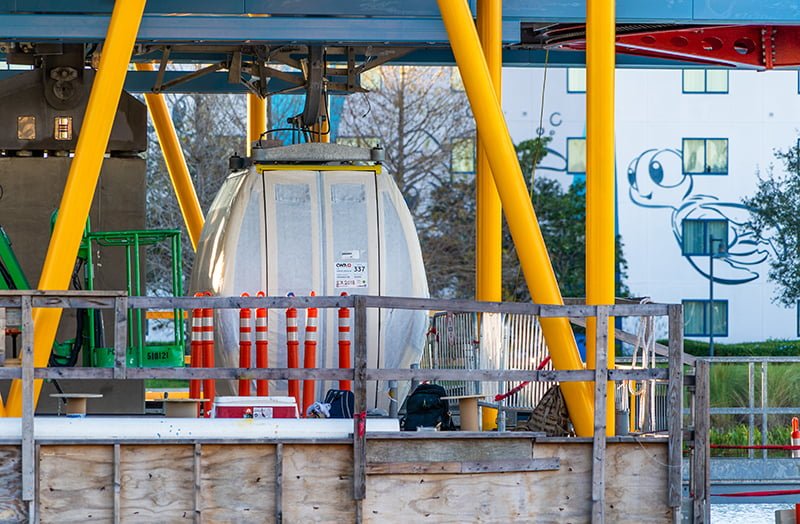 While I was wandering around Art of Animation and Pop Century, I saw a gondola car in place at the station. You’ll notice that there’s a paper cover on it, but this is an actual gondola car (it’s yellow), not one of the maintenance/construction vehicles we saw in our last Disney’s Hollywood Studios Update.

When I noticed this, I became a bit too excited. All I could think was, it’s almost here. I know that, officially, we still have over 6 more months…but the Skyliner is almost a reality. 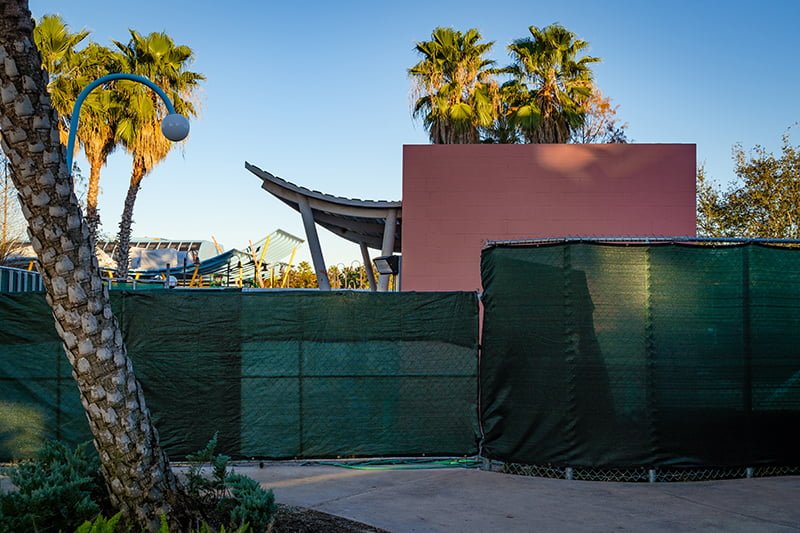 Over on the Art of Animation side of the Century Gap bridge, there’s construction for a small building that has a wavy roof similar to the Skyliner station.

My guess is that this will be a restroom facility. I’ll go further and speculate that the line for the gondola–for both resorts–will form over here, and this will be for people to use while waiting or before getting into line. That morning coffee works its way through the body fast! 😉 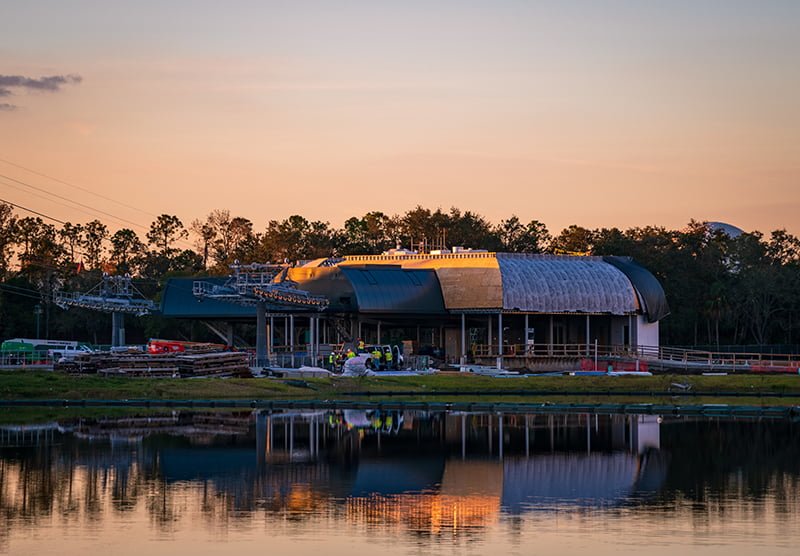 Next, the Disney’s Riviera Resort station, which will also service the north side of Caribbean Beach Resort.

Since this is technically the Riviera’s station, it’ll mirror that resort in style. Hopefully the finished product will have a nicely stylized mansard roof. 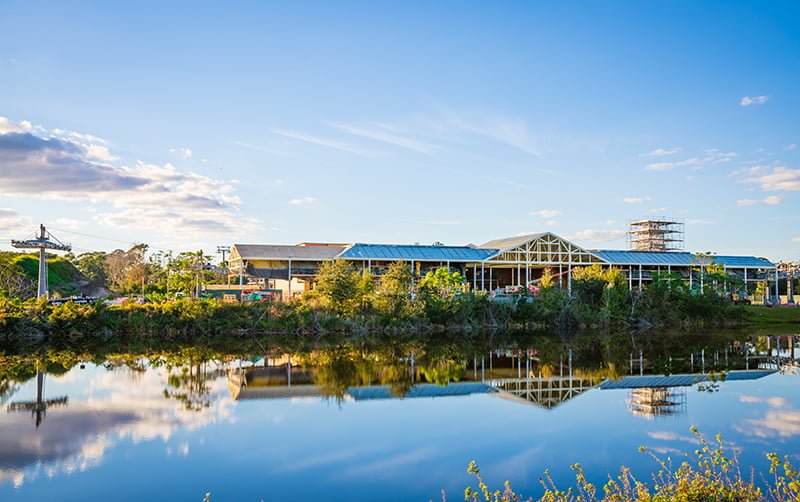 From there, we head south to the station at Caribbean Beach. This will be the largest of the gondola stations, and handle the most traffic.

Design-wise, I think this will fit the resort nicely. You can see the framework for a tower rising to the right, which will have a cupola mirroring other architecture around Caribbean Beach. The exterior framing reminds me a bit of the Speedway station over by Boardwalk…which might sound like a knock, but that’s a cool gas station. 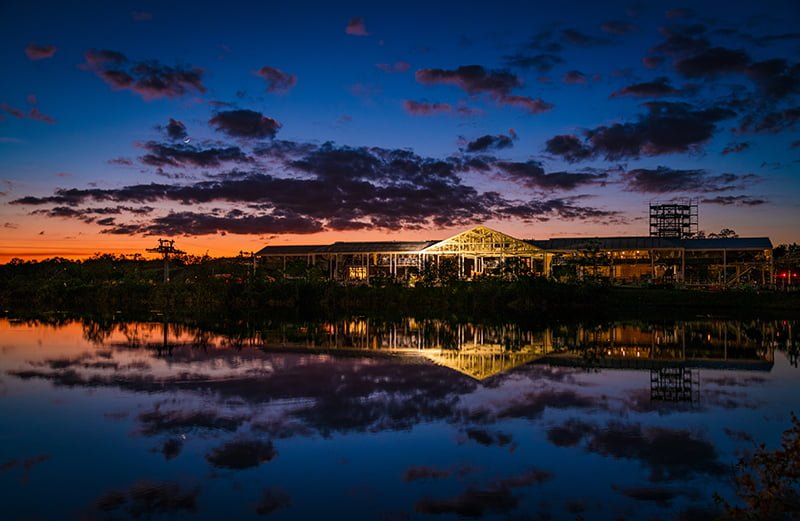 While it doesn’t look like a ton of progress has been made since our last update, every time we’ve been here, there has been a lot of work both day and night.

The above photo was taken around 6:45 p.m., and there was still work being done. 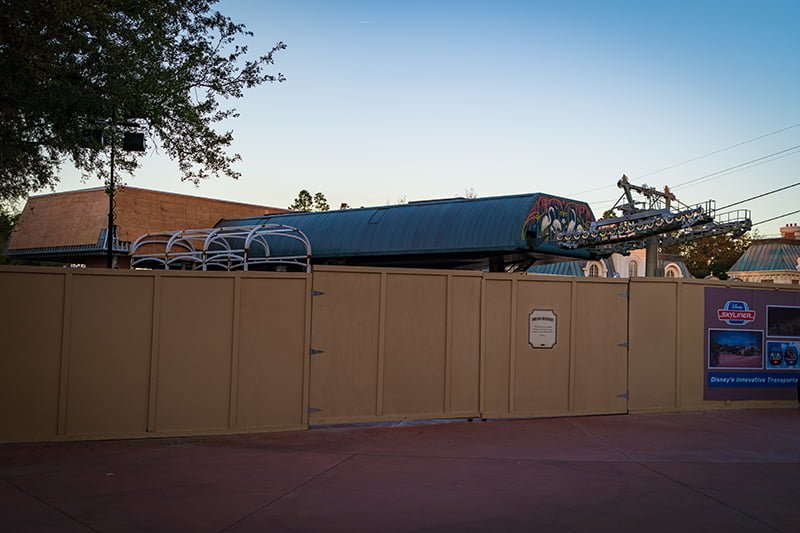 Heading to the parks, we begin with Epcot’s International Gateway.

For the longest time, visible progress on this station was way, way behind everywhere else. It now appears to be moving faster, but it’s impossible to tell what work remains to be done within the station complex. 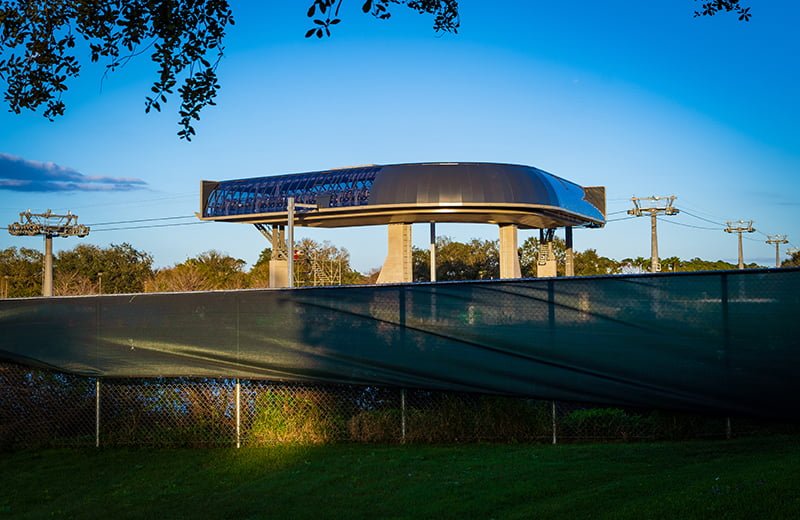 Walking between Epcot and Disney’s Hollywood Studios, you can see this turn from the pathway. It’s been really far along (finished?) since about last October.

Unrelated, but the regular pathway is once again open between the parks, making this a much easier walk. Mild January weather doesn’t hurt, either. 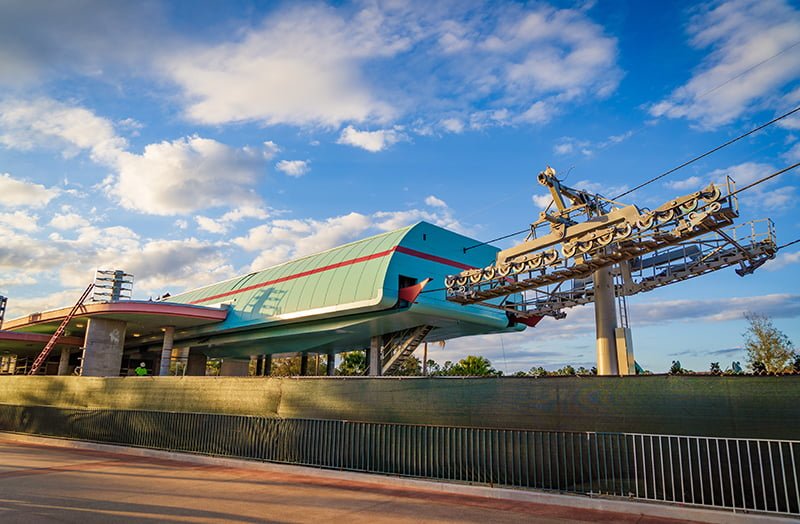 Finally, we head to Disney’s Hollywood Studios, which is the Skyliner station that has been consistently farthest along.

It has received more ornamentation (a racing strip!), and as with the Pop Century/Art of Animation Skyliner station, it appears that this could open as soon as a month from now. Again, we highly doubt that’ll happen, but it just illustrates how far along the work is on some of these Skyliner stations. 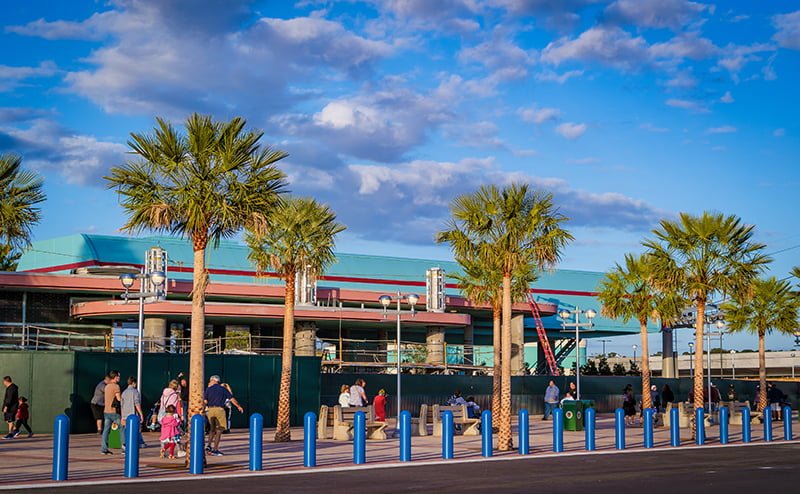 That’s it for this update on the Walt Disney World Skyliner gondola transportation network. If work keeps up at its current pace, there could be a lengthy soft opening well before the official Fall 2019 debut of the Skyliner.

There are a few potential reasons why that might’ve been chosen as the grand opening, but this update is already long, so we’ll tackle that topic in the February update.

What are your thoughts on the Skyliner? Have a favorite station yet? Have you already sworn off the Skyliner for some reason or another? Do you agree or disagree with our perspectives on sight-lines or A/C? Thoughts on construction progress? Any questions we can help you answer? Hearing your feedback–even when you disagree with us–is both interesting to us and helpful to other readers, so please share your thoughts below in the comments!