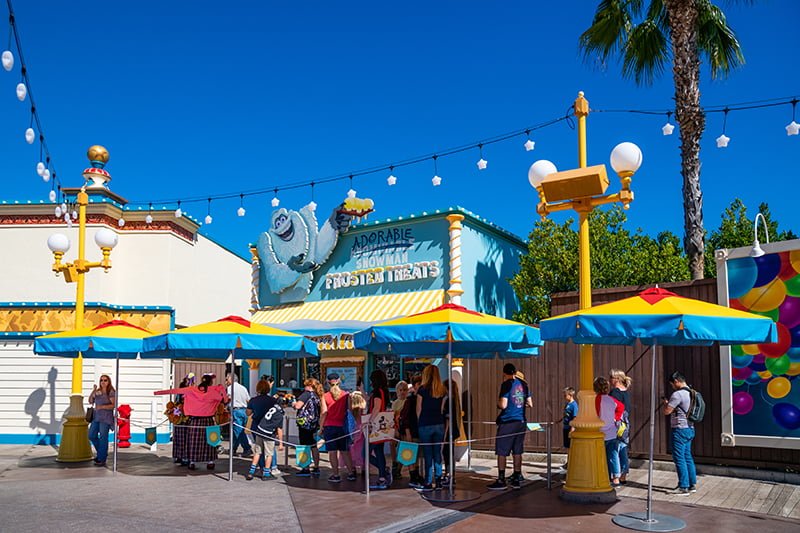 If you’re looking for ice cream at Disney California Adventure, Adorable Snowman Frosted Treats on Pixar Pier is your best option. Not only can you get what’s essentially a Lemon Dole Whip, vanilla & chocolate soft serve, and other frozen treats. In this post, we’ll share photos and review what might be the best ice cream at Disneyland Resort.

Now, a dedicated review for a soft serve ice cream stand might seem like overkill, but have you met me?! One of my most passionate articles last year was “Tom’s Top 7: Best Ice Cream at Walt Disney World.” I would’ve done the same for Disneyland Resort, but the fact is that Paradise Pier Ice Cream Co. was my go-to there.

While I spent way too much money at that incarnation of the stand, I’ve also lamented my disappointment at the loss of the old Catch a Flave, one of DCA 1.0’s strong points and an underrated pun (get the song reference?). I still make a point of buying some flavor-swirled ice cream at the D23 Expo, as there’s typically a vendor there with it.

The current incarnation of this stand is an addition with the Pixar Pier makeover of Paradise Pier, and is arguably one of the best aspects of the land’s re-imagining (read our full Pixar Pier Review for thoughts on the rest of the changes).

If you find this “Adorable” Snowman vaguely familiar but can’t quite place him, you’re probably not alone. He was a minor, unnamed character (referred to as the yeti) who worked at Monsters, Inc. until he got banished to the Himalayas.

His claim to fame in the movie is offering yellow snow cones to Mike and Sulley, who were taken aback in disgust until the yeti said, “No, no, no, don’t worry. It’s lemon.” (Alternatively, you might not recognize this character from Monsters, Inc. at all, and just assumed it was an odd crossover with Bumble the Abominable Snowman from Rudolph the Red-Nosed Reindeer.) 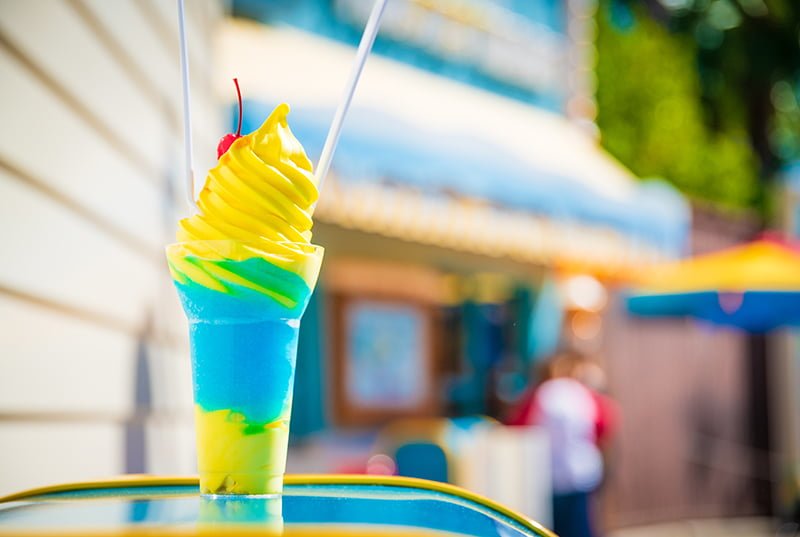 If you want the best thing at Adorable Snowman Frosted Treats, look no further than the Pixar Pier Frosty Parfait. I was concerned that this would just be a cute (yet perhaps a tad odd given the connotation of yellow snow) prop for Instagram photos, with lackluster taste. Fortunately, that’s not the case. This is easily one of the best desserts at Disneyland Resort.

The Pixar Pier Frosty Parfait is non-dairy lemon soft serve ice cream with blue raspberry slush swirl; it’s a large, shareable portion that’s worth the high price. The flavors work really well together for layers of sweet, semi-sour, and mildly tart. The slush provides texture and a different consistency from the soft serve, and it’s all very refreshing. 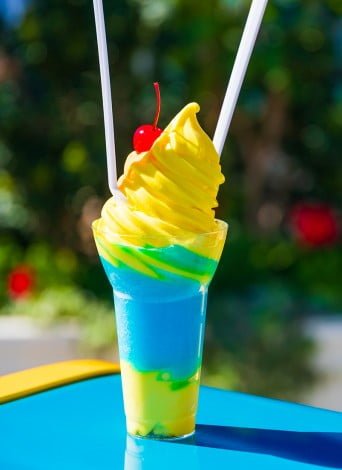 Technically, the Pixar Pier Frosty Parfait is not a Dole Whip. It’s not Dole-branded, meaning that it’s “just” lemon non-dairy soft serve. As a practical matter, that makes it the Lemon Dole Whip.

“Dole Whip” has become synonymous with fruit-flavored non-dairy soft serve among Disney fans. The dessert has become so ingrained in the fan culture that it’s more associated with Disney than it is Dole at this point. Sort of like Kleenex, it’s basically a proprietary eponym at this point. 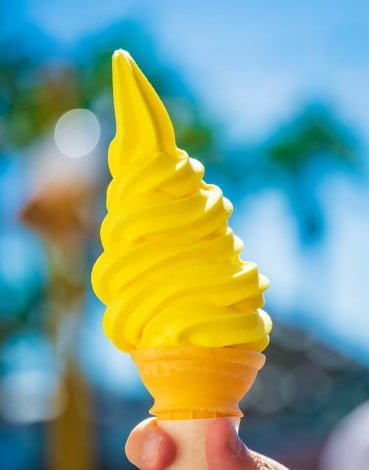 The “It’s Lemon! Cone” is the only other option you should consider here–and only in large. (Don’t bother with the snow-capped option, either.)

This is the same non-dairy soft serve as in the parfait, but here you get a more concentrated dose of the crisp citrus flavor. We think the parfait offers a better value proposition despite its higher cost, but this isn’t necessarily a poor value, either. 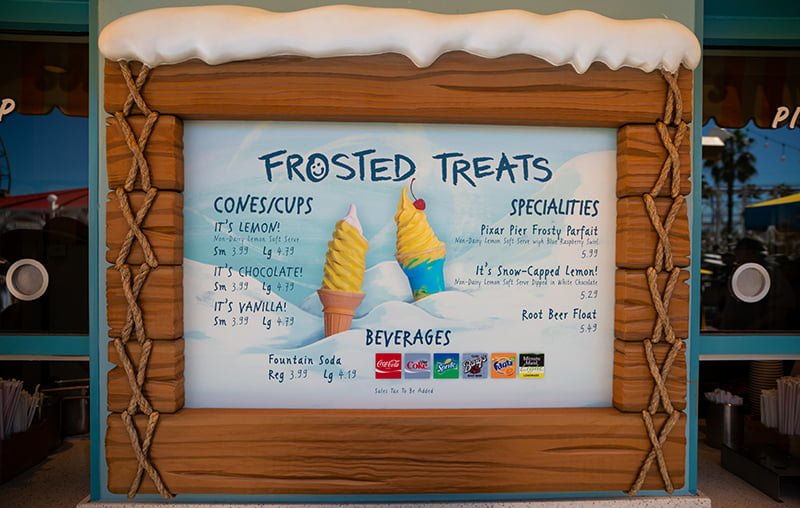 If you want anything else on the menu at Adorable Snowman Frosted Treats, go somewhere else.

No joke. Even months after this new-look ice cream stand opened, it’s still drawing really long lines most of the day, to the point that walking to Cozy Cone Motel in Cars Land and ordering soft serve there and walking back will be a faster option than waiting here. 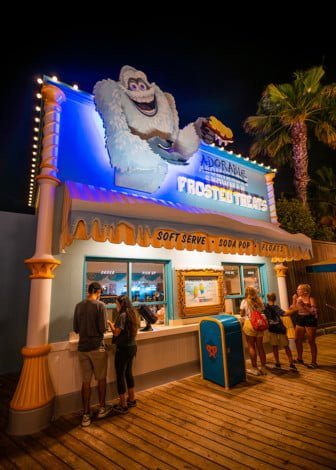 Failing that, pretty much any time before 11 a.m. will result in a minimal wait at Adorable Snowman Frosted Treats. That’s really the sweet spot for visiting, with any time after 1 p.m. all the way until park close potentially resulting in waits of 15 minutes or more. Seriously, we’ve been here at almost 10 p.m. and encountered a line filling several switchbacks.

Overall, Adorable Snowman Frosted Treats is a nice addition to Disney California Adventure. Even though we’ve been fairly harsh critics of all things Pixar Pier, this is an unequivocally positive addition. This stand was made bland during a hasty place-making phase to “tone down” Disney California Adventure, and frankly, wasn’t anything special. The new stand is cute, a playful nod to Monsters Inc., and has a couple of delicious and unique tasty treats. Hard to knock anything about that!

Have you tried any of the soft serve ice cream at Adorable Snowman Frosted Treats? Did you have the Pixar Pier Frosty Parfait? Would you consider this a “Lemon Dole Whip” by another name? Do you agree or disagree with our assessment? Does anything on the menu here interest you, or is soft serve not your preferred form of ice cream? Any questions? Hearing your feedback–even when you disagree with us–is both interesting to us and helpful to other readers, so please share your thoughts below in the comments!