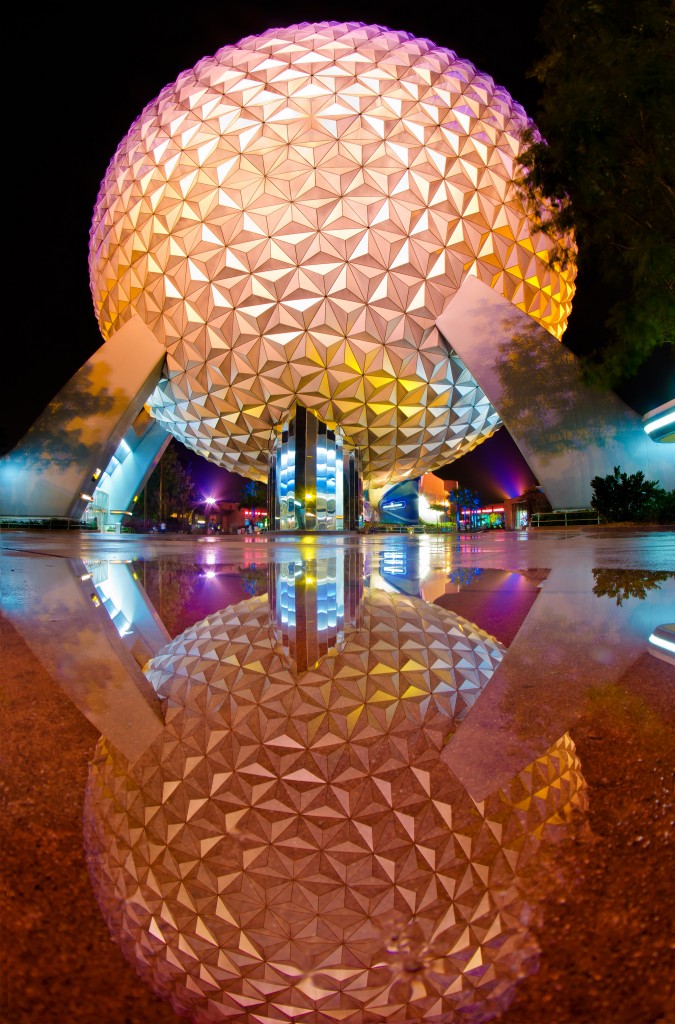 Spaceship Earth at Walt Disney World’s Epcot (or EPCOT Center as many fans, including me, still call it) is one of my favorite things to photograph. It’s something you won’t see anywhere else, and it’s truly majestic. I’ve taken thousands of photos of it, and given that, you might think that I’ve exhausted unique photo ideas for it. Not at all. Taking a unique photo of anything in the Disney theme parks really isn’t that difficult. It just takes some creativity, and sometimes some diligence.

Take this photo. There is absolutely no Photoshop trickery here. To achieve the look to this photo, I actually had to set my camera in a puddle of water in front of Spaceship Earth! I took the photo on the first night of our February 2012 trip. Shortly after walking from Disney’s BoardWalk Resort, where we were staying, to Epcot, Sarah called it a night because of the rain. I had forgotten my poncho, but luckily I had remembered my camera’s poncho, so I powered on, continuing to take photos as I got soaked, hoping that the skies would clear and I’d have a chance to take some great wet pavement night shots.

Even with the camera-poncho, this proved difficult, as raindrops kept landing on the glass of my lens, ruining many otherwise good shots. But I kept going. Finally, I ended up in Future World, which was all but empty thanks to the rain. After taking a few photos on the side of Spaceship Earth, I decided to wait out the rain by enjoying the attraction. Then, I saw a glorious puddle of water in an uneven area of pavement. Knowing this puddle might dry up or be mopped up by Cast Members, I decided to delay the ride. I positioned my tripod as low to the ground as possible, trying my best to angle the camera so I captured as much of the reflection as I could. Finally, I determined that I needed to get even lower. I carefully set my camera on my camera strap so that the camera itself wouldn’t get wet and started snapping away. Since my camera was so low to the ground, I also had to get low to compose the shot. I can only imagine what other guests thought as they saw some fool lying on the ground with his camera in a puddle of water.

I may have been soaked for the rest of the night, but it was worth it.

15 Responses to “Reflection of Earth Photo”