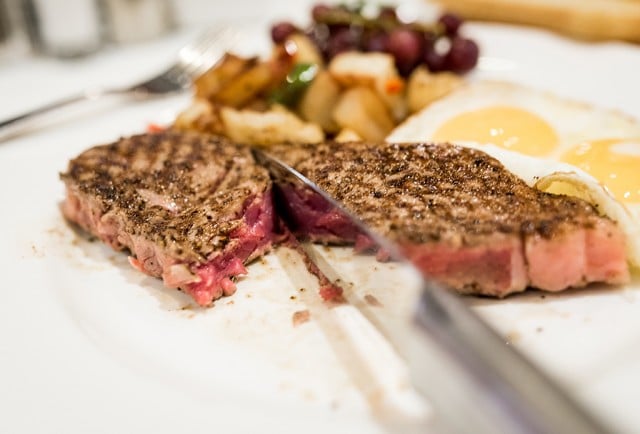 Steakhouse 55 is a fine dining restaurant in Disneyland Hotel at Disneyland Resort. This review features food photos of breakfast served at this dining spot, along with some tips, and thoughts on the ambiance. Steakhouse 55 is open for breakfast and dinner, and is one of the more expensive dining options at Disneyland Resort for the latter, but seemed fairly priced (to us) for breakfast–certainly cheaper and less chaotic than the nearby Goofy’s Kitchen. The restaurant offers discounts for Annual Passholders, too.

It’s technically a “Signature Restaurant” at Disneyland, and is definitely one of the more refined dining options at the resort. If you question this classification, there are a slew of awards on the wall, including one slightly comical one from Zagat that’s similar to the one they have posted online: “Walt Disney would still be proud” of this “special-occasion” chophouse in the Disneyland Hotel offering “cooked-to-perfection” cuts and “great wines” in a “beautiful” setting where “the children are usually well behaved”; service is “terrific” too, so “make a reservation as this place fills up.”

Okay, first of all, what’s with all the random quotations? Is Zagat actually quoting someone, or is Zagat mocking someone with air quotes? Second, the line about children differs from the restaurant version, which almost reads as a tongue-in-cheek knock of Steakhouse 55 (I wish I would’ve taken a photo of it). Regardless, the restaurant has been praised by real critics, not just random bloggers like me who don’t really have “refined palates.”

Let’s take a look at the ambiance and food… 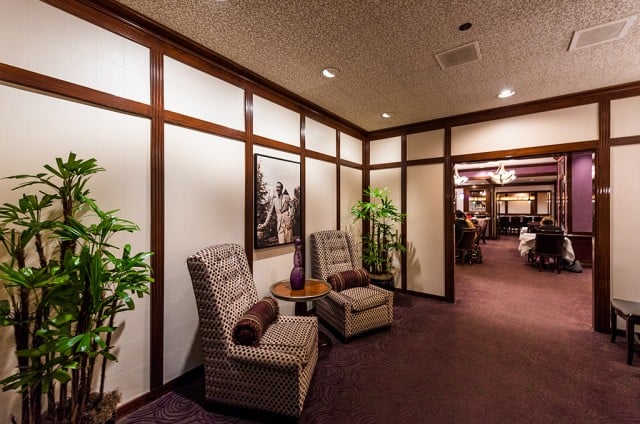 When you first walk up to Steakhouse 55, you’re greeted by a check-in podium and a bar and lounge area. Right away, this sets the tone. It feels like the kind of dimly-lit mahogany-wooded, swanky place from a bygone era where Humphrey Bogart and Clark Gable would soak up copious amounts of whiskey while arguing about communism or the issues of the day. 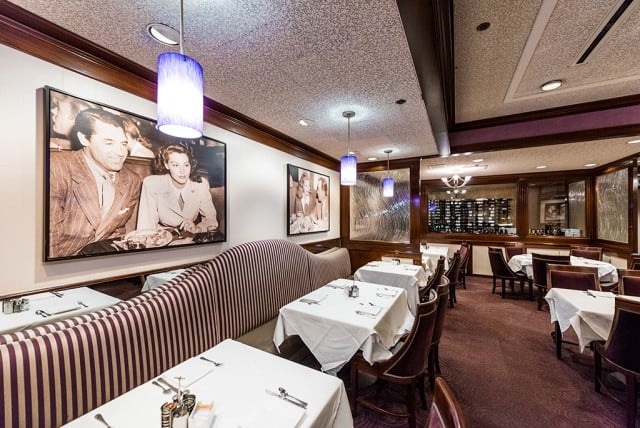 With his suave demeanor and deeply melodic voice, I think we can all agree that, were he alive today, Cary Grant would most definitely be a Disney Blogger. Mr. Grant, you left us too soon. 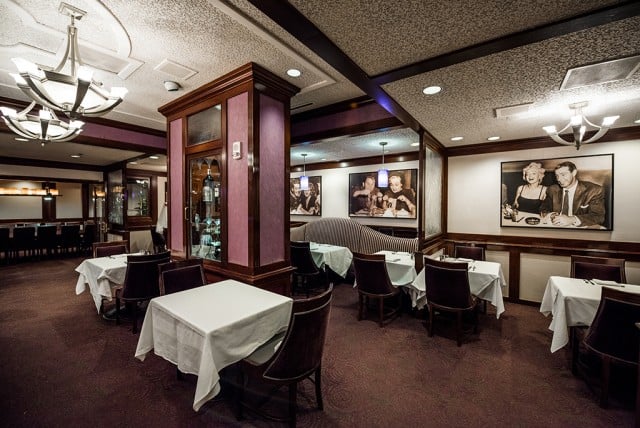 Kidding aside, Steakhouse 55 really does feel like a restaurant straight out of 1955 (it’s named for the year Disneyland opened) and feels like a place where Walt and his cronies might have done business. Unlike a lot of the Disney restaurants that are meant to have a Walt-era motif or theme, Steakhouse 55 actually feels like a place these people would have gone, rather than a tribute to them (well, save for the oversized photos on the wall).

This could be a bad or a good thing, depending upon how you look at it. Due to this difference in aim, Steakhouse 55 is elegant, crisp, and refined, but doesn’t have the same character or depth that you’d find at a place like Walt’s – An American Restaurant or Club 33 (well, before the refurbishment). It’s more like Carthay Circle Restaurant, except not quite as detailed. 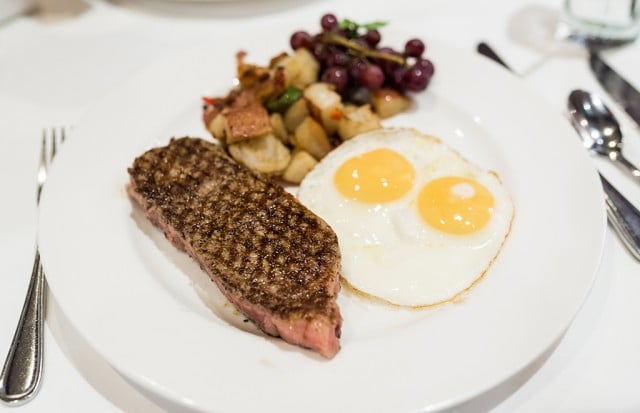 Breakfast is an interesting meal in any of the Disney parks & resorts. With few exceptions, I’m not a fan of breakfast at counter service restaurants at most Disney restaurants. Most meals seem to focus on powdered eggs and rubbery paper-bacon, and still charge about $8-9 for that. Then on the other end of the spectrum you have buffets, almost all of which are $25 per person or more.

Then you have the a la carte table service restaurants, where you can get a good meal, and spend maybe $12-15 (or more or less, depending upon what you get). Realistically, all of these options are pretty expensive for breakfast for most people, which makes eating 3 meals in the parks a costly–and unlikely–proposition. However, if you’re going to do it, I think table service breakfast or a less-expensive buffet is the way to go. That $8-9 meal of powdered egg and rubber bacon might be cheaper, but it’s garbage.

All of this is probably just my way of justifying the menu prices of Steakhouse 55’s breakfast to myself. Really, though, it needs no justification. 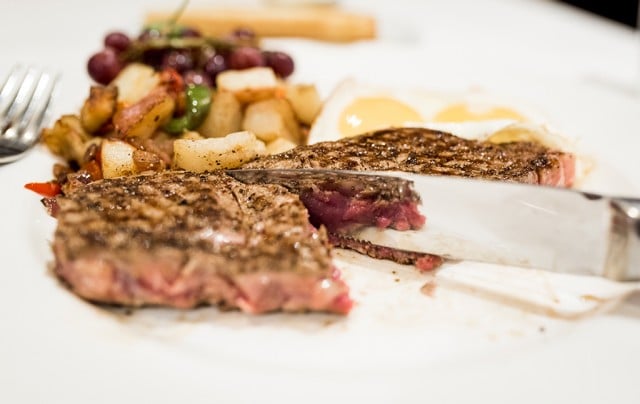 Since Steakhouse 55 is a…steakhouse…I opted to order the steak. At around $20, this is a pretty expensive breakfast, but the 7 oz Angus Certified New York Steak was perfectly cooked, juicy, and tender. That, plus the eggs, potatoes, and toast made me feel like it offered a pretty good value for what it was. I wouldn’t have minded a slightly larger steak, but that’s pointing out the obvious. “Gee, I’d like a smaller steak” is not a phrase I have ever uttered. 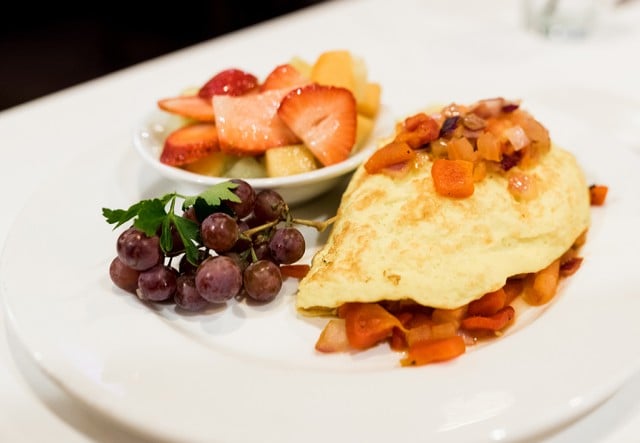 Sarah went for the Build-Your-Own-Omelette, going for a healthy, mostly veggies option with no oil to keep it healthy. She really liked it, saying it had good flavor and tasted light. I tried it and thought it was fine, but I think that’s more a result of her changes to the omelette rather than the food itself. Who wants an oil-free omelette?! 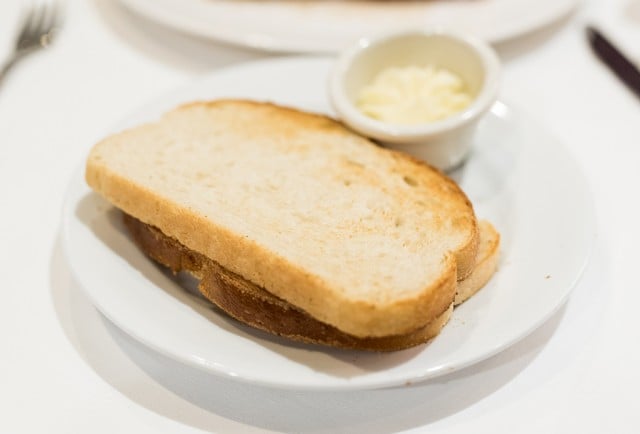 This is the toast that came with all of our meals. I really don’t know what to say about this…it tasted like toasted bread? 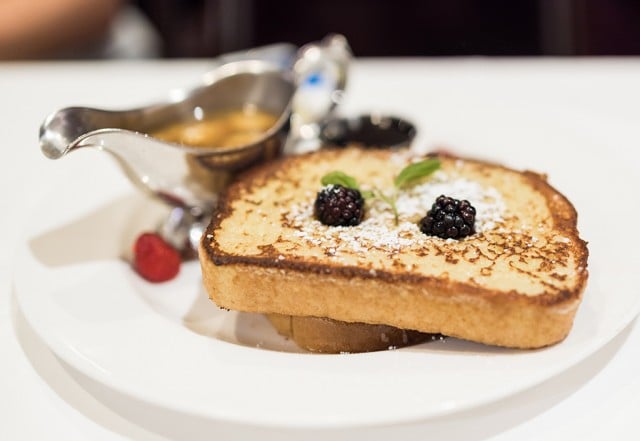 We dined with Amateur Nike Enthusiast Guy Selga, who had the French Toast with Bananas Foster. Guy really liked this, and described it as follows: “Thick and rich. Somehow still qualifies as a breakfast even though it’s covered in bananas foster sauce.” 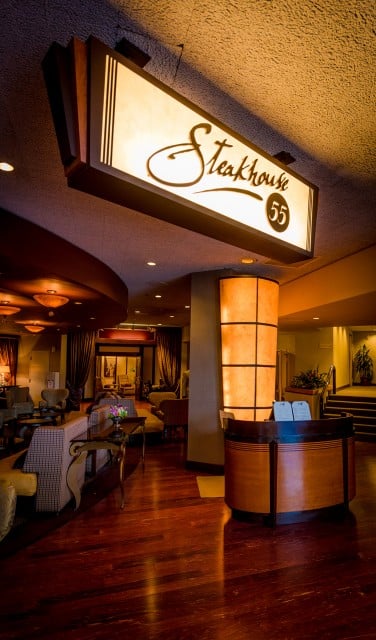 Overall, we were all really satisfied with our breakfast at Steakhouse 55. The restaurant was uncrowded and relaxed, and the food was very high quality and tasted excellent. It offers a great adult option for a refined sit-down breakfast at Disneyland Resort (every other guest when we were there seemed to be a business-person) and it’s a great way to dine at Steakhouse 55 without doing a costly dinner. It is pricey, even by Disney standards, for breakfast, but I feel the quality of the experience and food is in line with the price for the most part. It’s not a place I would dine for breakfast on a regular basis due to that cost, but for a one-time meal or a morning splurge, you really can’t go wrong.

Have you been to Steakhouse 55? Is it a restaurant you’d consider for breakfast? Are you a fan of steak for breakfast? Like anything else here? If you aren’t a fan, why not? If you have any questions or thoughts to share, please post them in the comments. We love hearing from readers!