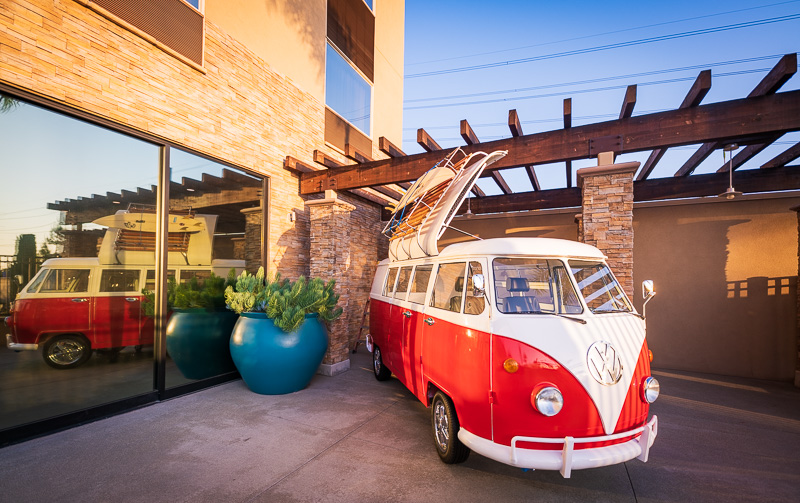 SunCoast Park Hotel Anaheim, Tapestry Collection by Hilton is a new hotel near Disneyland, which already ranks #2 of 128 hotels in Anaheim, California on TripAdvisor. It hits the sweet spot of inexpensive pricing and quality, while also being within walking distance of the theme parks, shopping, and dining. This resort review features room photos of the studio suite, thoughts on amenities, and pros & cons of booking at this hotel versus its nearby competitors.

This newcomer is SunCoast Park Hotel Anaheim, Tapestry Collection by Hilton and it’s not entirely new. Rather, this hotel is a “reimagining” of the Anaheim Country Inn & Suites by Radisson, which itself only opened a few years ago. That chain just opened the new Radisson Blu Anaheim a few months ago (review coming soon), and it’s only a couple blocks away. It’s tough to keep track of the ever-evolving Anaheim hotel scene.

That’s true even for us, and we’ve stayed at over 50 hotels for our Disneyland Area Hotels Reviews & Rankings. Honestly, when I booked the SunCoast Park Hotel Anaheim, I didn’t realize it wasn’t brand-new. I looked at the map and assumed it was the aforementioned Radisson that was being built when we were last in town. This might seem like a glaring oversight, but it’s been a long year and Anaheim’s development boom over the last decade has meant there’s always around a half-dozen hotels under construction or being overhauled.

The “new” SunCoast Park Hotel Anaheim is now part of the Tapestry Collection by Hilton. Along with Curio Collection, this is one of the Hilton’s growing labels, with the Tapestry Collection portfolio containing over 55 original hotels that offers guests “unique style and vibrant personality, and encourages guests to explore the local destination.”

It feels like the Tapestry Collection is Hilton’s compromise between the personality of an independent boutique hotel and the streamlined experience of a chain. There’s definitely some local flavor to the design and decor, with seaside scenery around the resort. In fact, this relaxed beach decor is the biggest upgrade of the hotel overhaul. This is a marked improvement from the Country Inn’s more generic style. However, the SunCoast is still very clearly a mid-range chained-brand hotel, for better or worse. 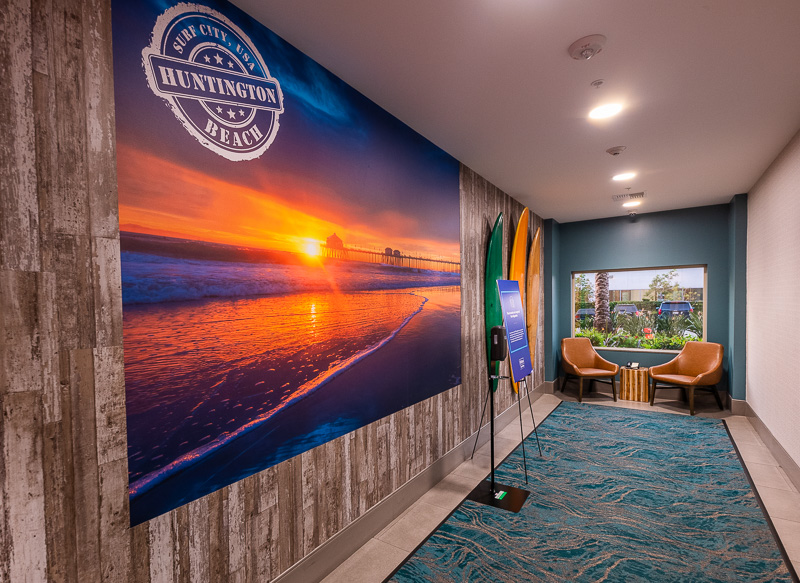 In our case, this was mostly a “better” scenario. We were coming up to the SunCoast from Laguna Beach, and were in need of an early check-in. This is something many independent hotels in Anaheim are reluctant to offer (some even charge for it!) but we had no issue thanks to having Hilton Honor Diamond status.

We love some of Anaheim’s family-owned and operated hotels, but there’s definitely something to be said for the predictability of the major chains. Earning and using rewards is another big plus. 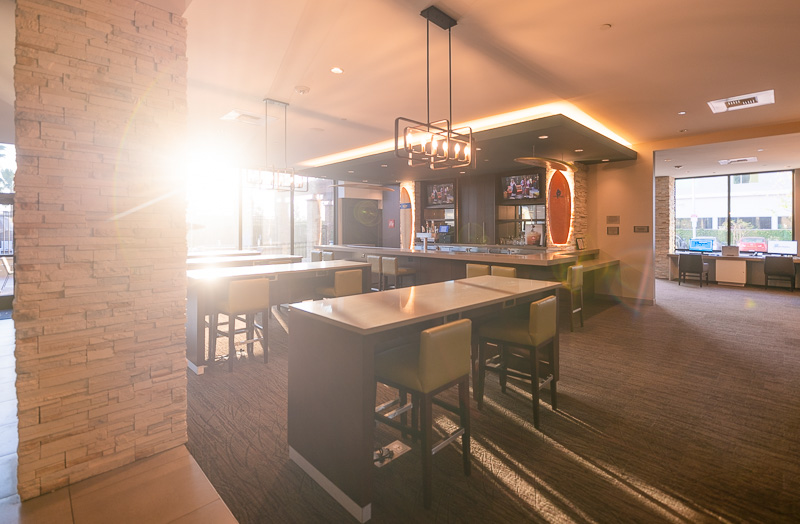 In this particular case, I doubt we would’ve had much issue with an early check-in or late check-out regardless of status. Our stay was during the initial reopening of Disneyland and Disney California Adventure, at a time when out of state guests were still not allowed to visit the parks. At most, the SunCoast Park Hotel Anaheim was half-full.

Beyond the hotel, the city just felt surreal. Anaheim GardenWalk still had Christmas decorations up and was a veritable ghost town and there was almost no one walking around Harbor Boulevard. The parks were starting to see some travelers from Northern California, but nothing approaching normal traffic levels. I can only imagine how desolate the Anaheim Resort District felt before the parks reopened. 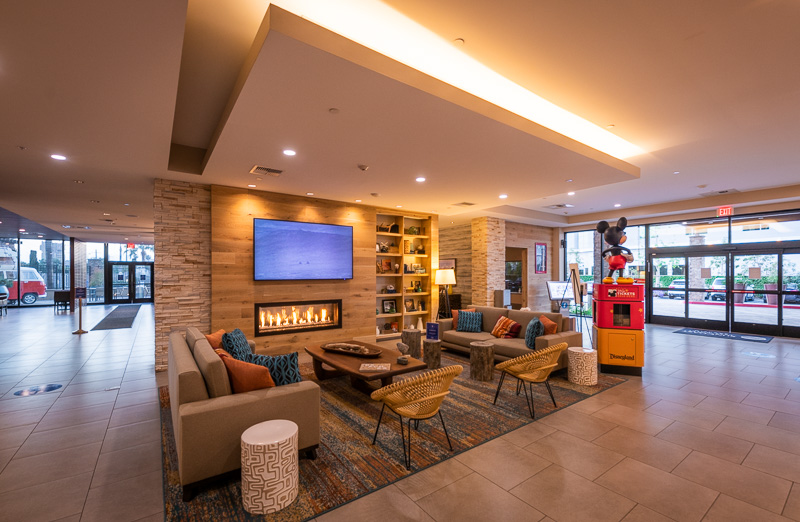 Anyway, the SunCoast Park Hotel Anaheim is about a 10-15 minute walk to the Disneyland Esplanade and about 2-4 minutes to Anaheim GardenWalk, which is a shopping, dining, and entertainment district akin to Downtown Disney. A range of dining and convenience stores at the corner of Harbor and Katella are also a short walk away.

This all makes the SunCoast a conveniently-located option. It’s a bit longer of a walk than we’d like to Disneyland and Disney California Adventure in terms of time, but over half of that time is on Disney Way, which is a quieter and more laid back street. In other words, the quality of the walk isn’t too bad. 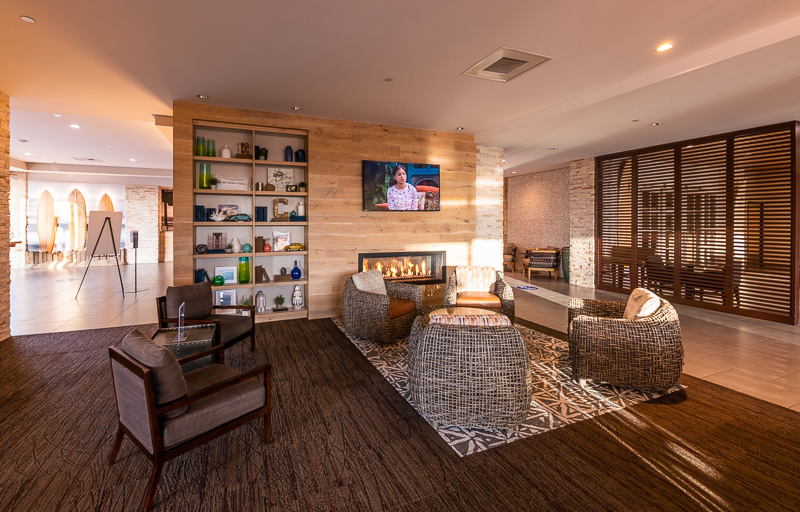 Despite the moderate walk, this hotel is not on the other side of Katella. That’s a huge plus. It’s still roughly the same distance away (maybe 1-2 minutes closer to the parks), but not having to cross that busy Katella intersection is nice, especially when returning from the parks at night. The Katella/Harbor intersection is one of two spots in the area that could really use pedestrian bridges.

We’d prefer to be right across the street from the Disneyland Esplanade on Harbor Boulevard, but there’s upside to this spot–especially if you’re venturing beyond the parks. It offers convenient access to the 5, which shaves a few minutes off the commute to Los Angeles or the beach cities for non-Disney days. Critically, it’s also really convenient to the In-N-Out Burger on State College Boulevard, which is open until 1 am. That’s valuable information if you’re visiting the parks while menus are scaled back and dining is difficult. 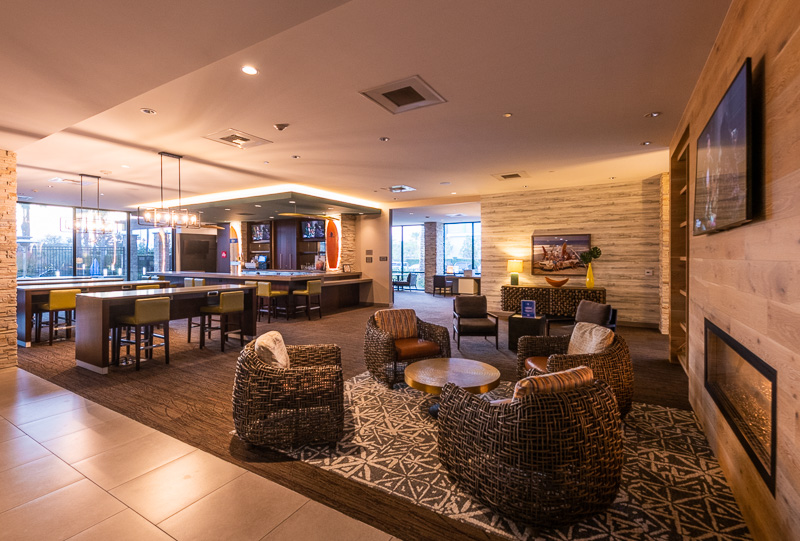 In terms of design, the SunCoast Park Hotel Anaheim, Tapestry Collection by Hilton follows a formula that is very common among new “big box” hotels in the city. At this point, there are over a dozen such options that are all recently-built and have interchangeable designs.

That’s not necessarily a knock, as there’s a lot of appeal to this style. However, it’s what prevents the SunCoast from being truly unique or memorable. It might even be why some people totally forget they’ve stayed in this hotel only a couple of years later, despite keeping an online journal of their thoughts on said experience. 😉 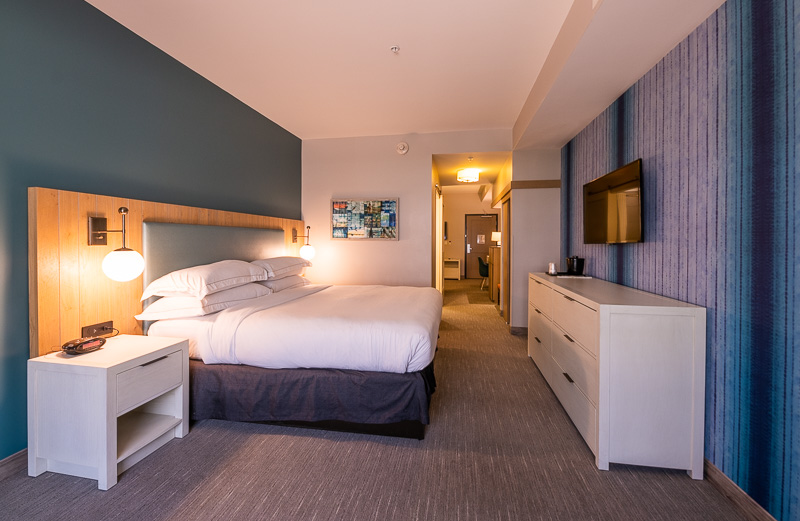 Aside from location, the biggest thing we really like about the SunCoast Park Hotel Anaheim is the price. We paid well under $100 per night for our stay, which was by far the best available rate for something that wasn’t sketchy. However, these are unprecedented times with low demand, so don’t expect to replicate that.

In spot-checking rates later this summer, I’m seeing prices that are always cheaper than the Residence Inn, SpringHill Suites, and other comparable hotels nearby. There are several dates when the SunCoast Park Hotel Anaheim is under $150/night, which is an excellent rate for any of these new family suite hotels. 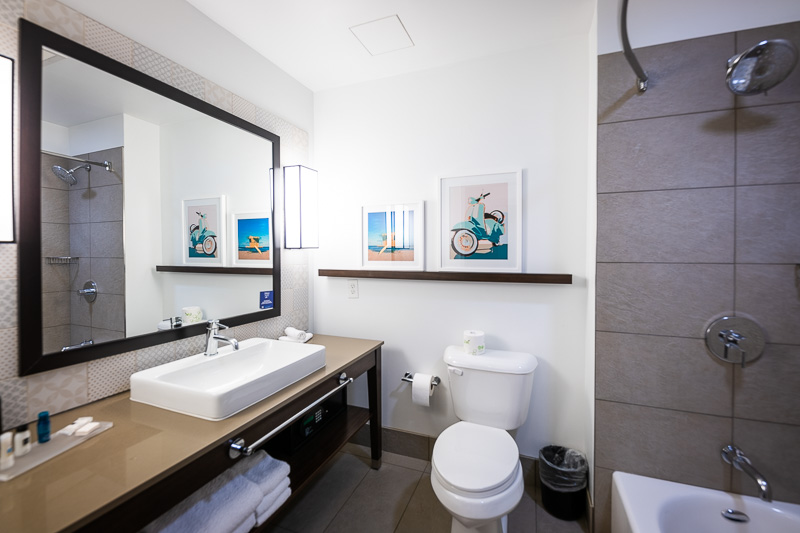 Note that rates are dictated by demand and can be considerably higher during peak seasons. As with all other hotels in Anaheim, prices fluctuate considerably, and you should always do comparison shopping with comparable hotels in the area before booking.

If you’re considering the SunCoast Park Hotel Anaheim as part of a Disneyland vacation, you can book a hotel + ticket vacation package via Get Away Today to save money. In addition to the package discount, some hotels have ‘4th night free’ promos. In addition to their normal discounts and special packages, you can save an extra $10 by using code TOURIST at checkout. We also recommend Get Away Today in our Guide to Buying Discounted Disneyland Tickets–booking a vacation package makes an already great deal even better. 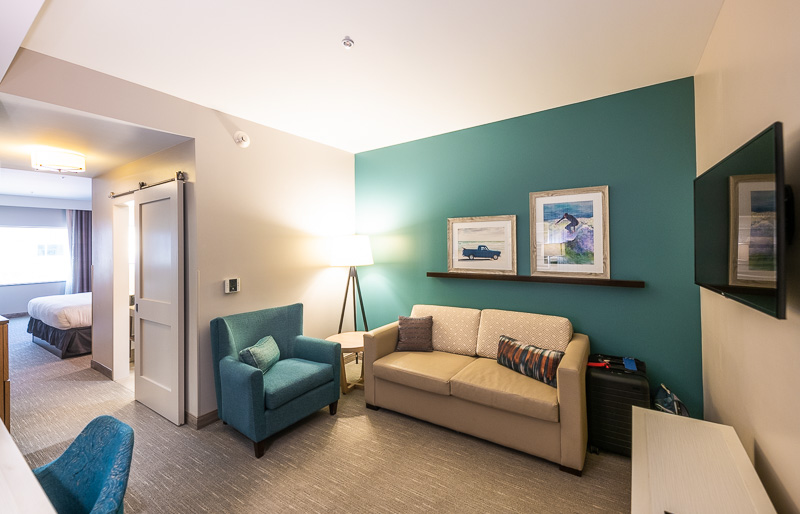 We booked the cheapest available standard hotel room and were upgraded a studio suite. The studio suites are basically the same as the standard guest room, but with the added seating area and sofa sleeper. If you’re only interested in the standard room, just imagine the photos below without the added living room area.

The studio suites at the SunCoast Park Hotel Anaheim are nice, but they’re our least-favorite of the new hotels near Disneyland. In fairness, the competition is fierce and these are still quite nice rooms. Our main complaint with the SunCoast is the utilization of space, as the area with the bed had a ton of empty space and the living room was a bit cramped. 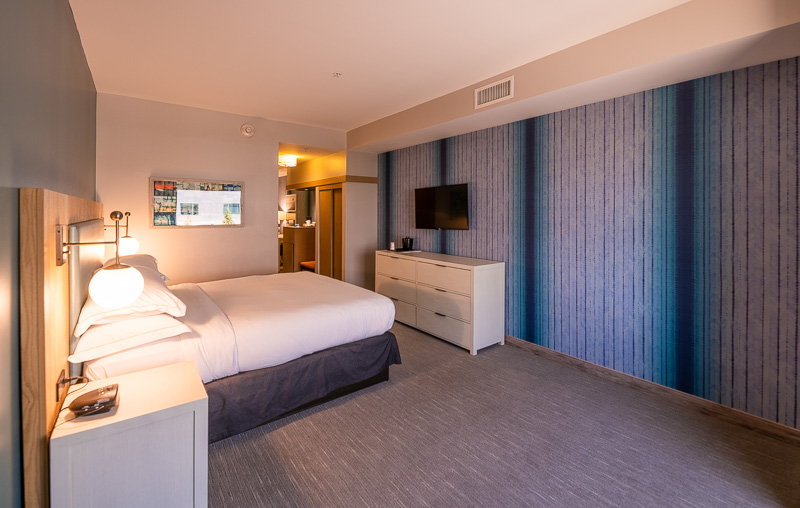 The layout for the sleeping area feels like it was designed for two queen beds, but king beds were put into the rooms instead. This criticism might seem like nitpicking, but with all of these new hotels being really strong, the distinctions lie in details like this.

There’s so much space for activities, you’ll be able to do P90X or make snow angels on the floor. Joking aside, we actually did use it for an in-room workout, so I guess the activity-space wasn’t wasted on us. 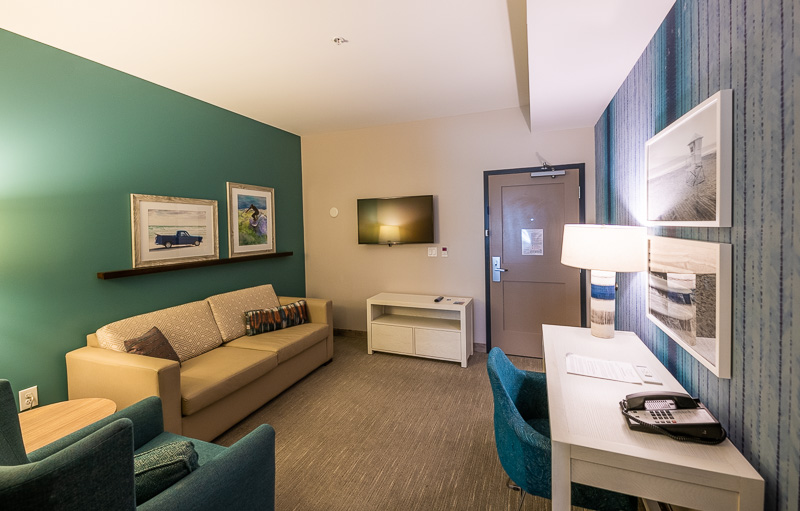 None of this was anything fancy–there’s little style to the room. The furnishings feel fairly cheap and will undoubtedly have to be replaced in 5 or so years, but it still felt new during our visit. With that said, we found the pillows and beds to be incredibly comfortable, the desk was serviceable, and the couch and chairs were also nice. Having two areas was nice for spreading out, but a door between the living and sleeping areas would’ve been nice.

Rooms also have an ironing board and iron, mini-fridge, microwave, coffee-maker, and USB charging ports. The bathroom is also sufficient, but doesn’t break the mold of cramped Anaheim hotel bathrooms. Too bad some space wasn’t taken from the sleeping area for a bit more breathing room in here. 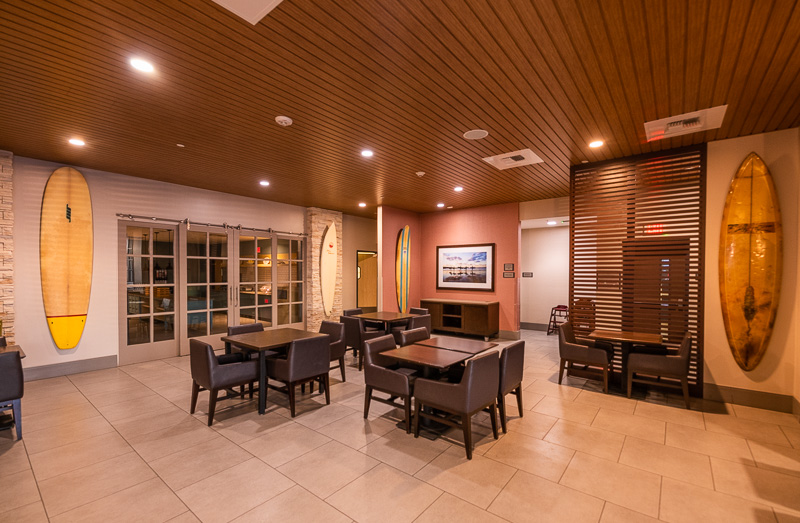 The highlight of the amenities is the pool and hot tub area. This is pretty nice by Anaheim standards, and is secluded from passers-by (not that there are many) and the parking lot. It’s not a rooftop pool like some other new hotels in Anaheim, but it’s still far better than average.

Other amenities include a 24-hour business center, fitness center, free self-service laundry room, lobby convenience store, and restaurant/bar. Not sure what the breakfast situation is normally like, as that was the one thing that was still temporarily suspended during our stay. There is a $24 parking charge, which stings a bit more than normal when the hotel is located among several empty lots. 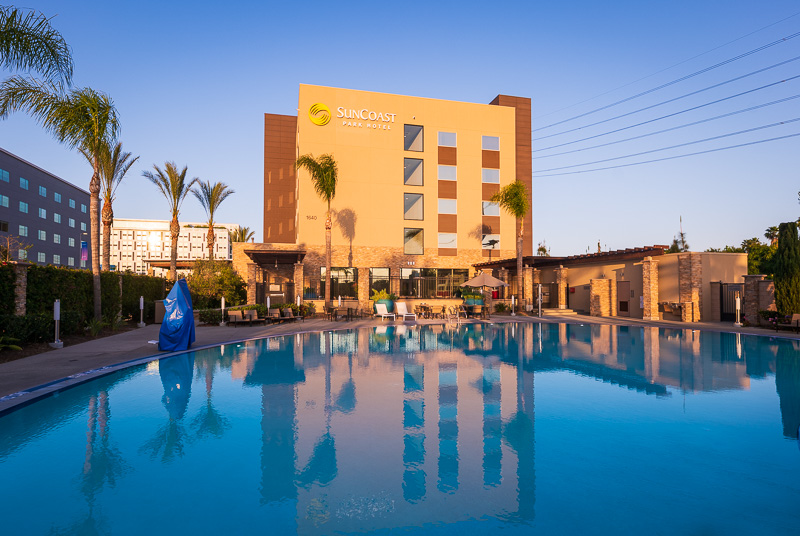 Overall, the SunCoast Park Hotel Anaheim Tapestry Collection by Hilton is a solid option. Nothing about it is really anything special or compelling, but it checks all of the right boxes. The common areas are welcoming, beach city decor makes it distinctly Californian, the pool area is inviting, and the rooms are fresh and get the job done.

Whether to book here or not will ultimately come down to pricing. When we stayed at the SunCoast Park Hotel, it was literally the cheapest option among hotels in Anaheim that don’t raise any red flags (a much smaller subset of all hotels/motels in Anaheim). With that nightly rate in mind, the SunCoast is a top 5 pick. Assuming a more normal price-point, it’s just outside the top 15.

Have you stayed at the SunCoast Park Hotel Anaheim Tapestry Collection by Hilton? Do you agree or disagree with our assessment? Thoughts on the rooms or amenities? Any questions? Hearing your feedback—even when you disagree with us—is both interesting to us and helpful to other readers, so please share your thoughts below in the comments!