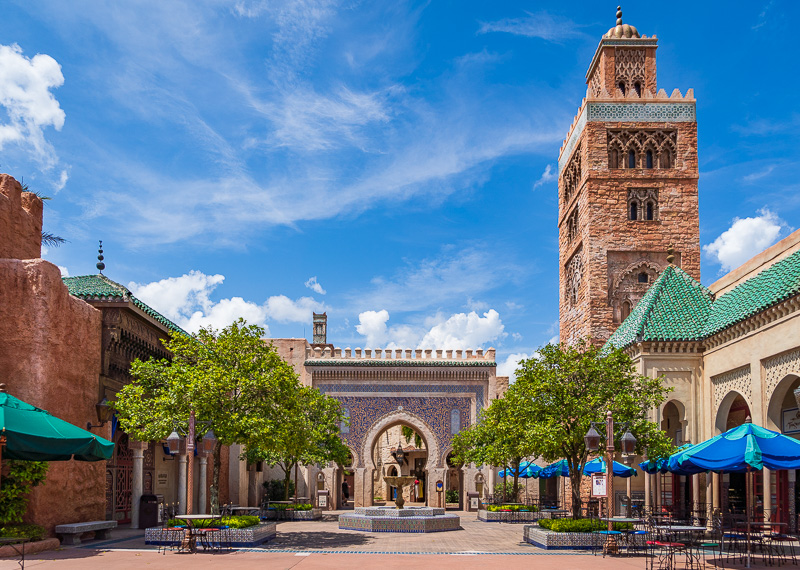 Tangierine Cafe is Morocco’s counter service restaurant in Epcot’s World Showcase at Walt Disney World. This dining review features food photos, thoughts on the quality, our experiences here, value for money, and how Tangierine Cafe compares to other restaurants in Epcot. (Updated August 4, 2020.)

When Walt Disney World reopened in July, Tangierine Cafe was one of the operational counter service restaurants at Epcot. However, a few weeks later, Tangierine Cafe has temporarily closed again due to a lack of demand. Marrakesh Moroccan Restaurant Group, the third party operator of Tangierine Cafe, has not indicated when the dining option will return.

The restaurant’s operator received a Paycheck Protection Program loan of $1-2 million to retain 260 jobs, which is pretty common of these third restaurant groups at Walt Disney World. Many are small businesses that are operating on tight margins; with reduced capacity, low crowds, and no Disney Dining Plan, it’s tough for these restaurants to remain viable even now that the parks have reopened.

In our admittedly anecdotal experience, counter service restaurants have been the busiest type of dining option at Walt Disney World since reopening. It’s not uncommon to see these venues nearly “full” both inside and outside (with physical distancing), whereas table service restaurants and snack stands are much slower.

Although we can’t speak to Tangierine Cafe specifically, it would seem an exception to this. Elsewhere at Epcot, we’ve noticed that Regal Eagle Smokehouse and Katsura Grill have been fairly busy at meal times (including last night). By contrast, the Taste of Epcot Food & Wine Festival booths seldom have lines and table service restaurants have plenty of availability.

Our concern at this point is that Tangierine Cafe re-closing is a harbinger of what’s to come with other restaurants in the theme parks at Walt Disney World unless attendance picks up soon. With the dining lineup already dramatically scaled back, we’re really hoping that doesn’t happen. Rather, it’d be nice to see things pick up so Tangierine Cafe can once again resume operations–as can other restaurants that remain temporarily closed! 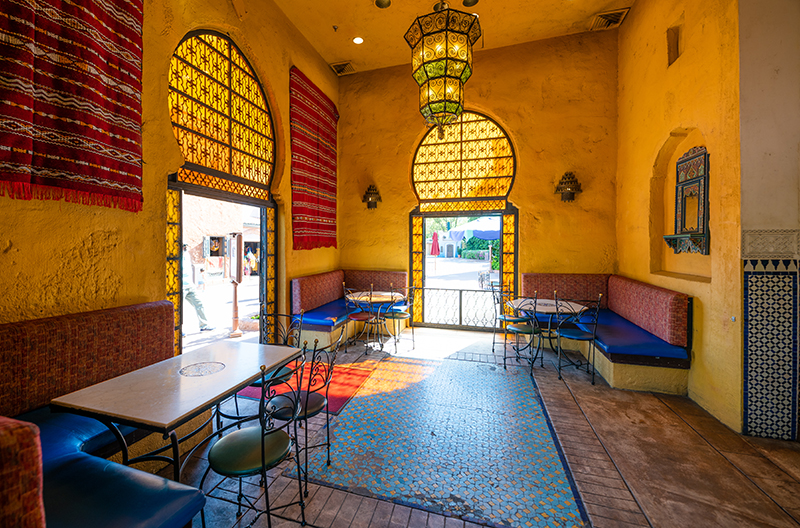 As for background info once things go back to normal, Tangierine Cafe participates in the Disney Dining Plan as a counter service credit. It does not accept the Tables in Wonderland card for a 20% discount. As far as value goes, it is a good value on the Disney Dining Plan (see our ranking of the best value quick service restaurants here). It also ranks highly on our list of the top counter service restaurants in Walt Disney World, making it a rare double threat!

As the location suggests, Tangierine Cafe is a quick service restaurant serving Mediterranean-inspired menu items. The cuisine consists of North African and American favorites such as lamb, couscous, and salads. As we have long been fans of Tangierine Cafe, this was actually one of the first Walt Disney World restaurants we reviewed. We’ve since dined here around a dozen times and have revisited the review with added thoughts. 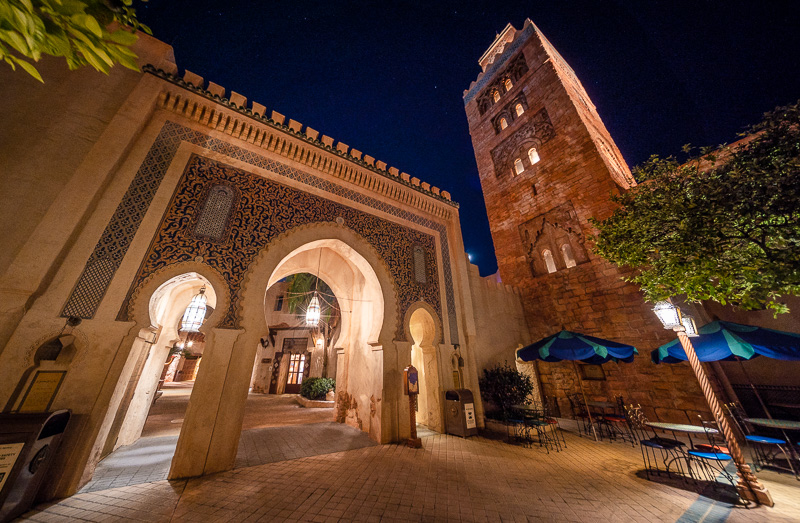 For starters, Tangierine Cafe holds up. During the decade-plus that we’ve been going to Walt Disney World with regularity, Tangierine Cafe has been our go-to “nowhere else to eat and we’re in World Showcase” option (with Sunshine Seasons being its Future World counterpart).

During that time, I can count the bad meals we’ve had at Tangierine Cafe on zero hands. It’s consistently and predictably good, the portions are generous, and the menu has been rock solid (and pretty much unchanged) for ages.

For us, it’s our preferred choice when we need to stake out a spot for IllumiNations soon and have to scramble to find somewhere to eat quickly. (The downside to that is we’re often carrying our food away and fail to take photos of our meals here.) 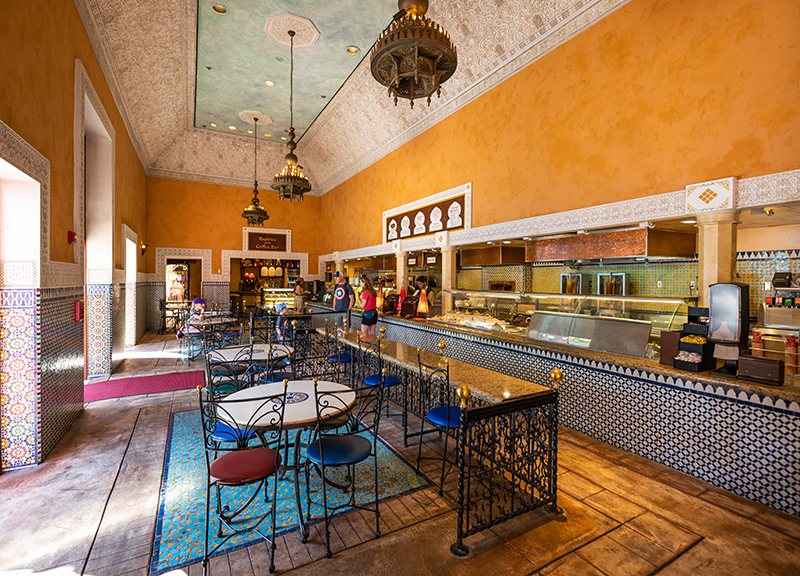 As far as theming and ambiance go, there isn’t much to discuss here. This is not because the theming of the restaurant is bad, but because the seating area is basically the Morocco pavilion, as a whole (there are some tables inside and right outside the restaurant, but you can eat anywhere you want).

As I find Morocco one of the most architecturally-stunning pavilions in the World Showcase, Tangierine Cafe scores well for theming. I highly recommend grabbing a table outside in the shade. Much better than inside.

Tangierine Cafe is pretty much universally adored. People who hate it are few and far between, and are wrong. They’re probably the same people who love Restaurantosaurus and think that Joffrey’s is delicious. I kid, I kid. (Editor’s note: This joke originally referred to Pizza Planet and Nescafe…RIP to both, I guess.) 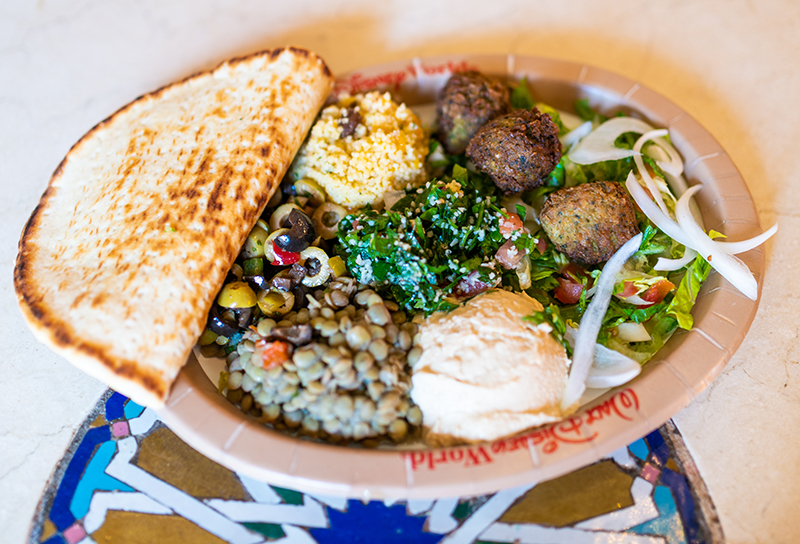 Although Tangierine Cafe’s menu might seem intimidating if you’re just reading it online, it’s actually pretty simple. Basically, there are several variations on the Shawarma Platter (chicken, lamb, and combo), plus a vegetarian option, a Kefta option, and Saffron Rotisserie Chicken.

Our go-to item is the Shawarma Chicken and Lamb Platter (below), but Sarah’s also a fan of the Vegetable Platter (above). We’ve yet to try the Saffron Rotisserie Chicken. I guess that gives us yet another reason to go back and update this once again! 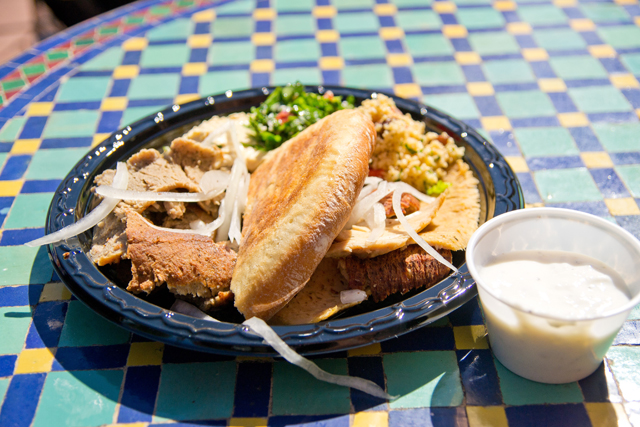 Like most restaurants in Epcot’s World Showcase, it’s a bit Americanized. Still, it is a nice departure from the standard cuisine found at a lot of Walt Disney World restaurants. 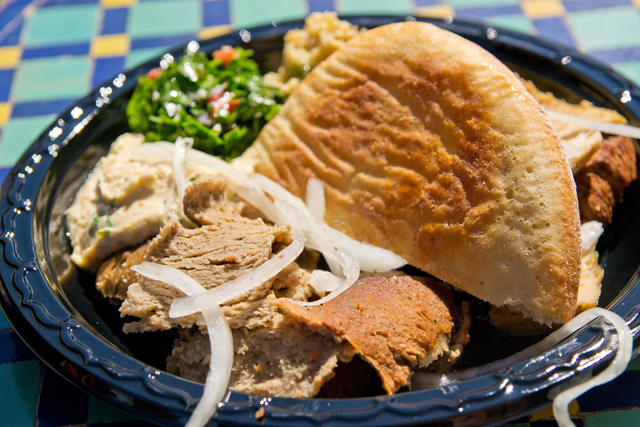 The chicken and lamb platters at Tangierine Cafe are excellent. They have great flavor, and the self-assembly ensures that you can top them with items you like. They are all served with a side of Hummus, Tabouleh and a Tangerine Couscous Salad and Moroccan bread.

I’ve seen some people complain about the prices of Tangierine Cafe, but I think those complaints are a little baseless once some context is added. Sure, platters are in the $14-18 range, which is expensive by counter service standards. 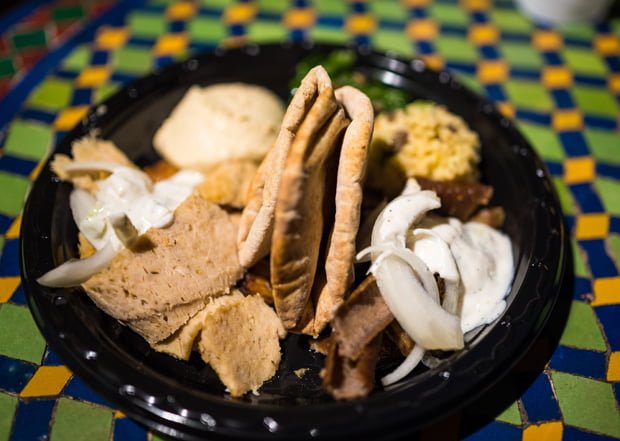 However, most are incredibly high quality, far superior to average counter service options at Walt Disney World. Moreover, I’d argue that every single one can feed two people.

The platters at Tangierine Cafe likely won’t fully satisfy two people, but with the bakeries in France and Norway nearby, this should be of little issue. Figure you’re going to spend $16 on an entree here plus another $6 from one of those bakeries for an exceptional meal costing $12 per person, which is not bad at all. 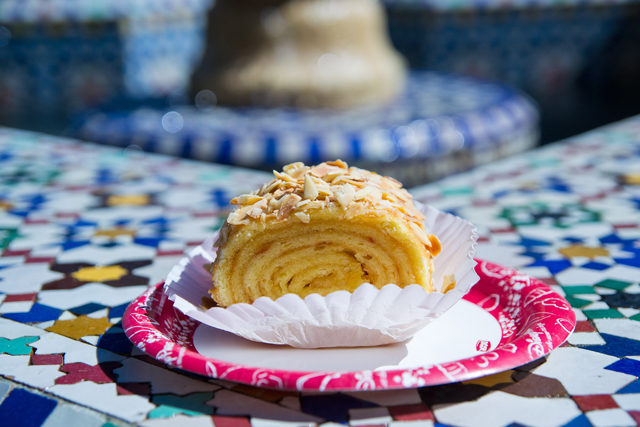 Overall, Tangierine Cafe is one of the best counter service restaurants at Walt Disney World. It offers a very unique menu, but not so unique that it will alienate less-adventurous guests–so long as they give it a try in the first place. The menu is arguably the best, highest quality, and most authentic of the counter service locations in World Showcase. The desserts, generally, don’t look all that appealing, but it’s hard to penalize Tangierine Cafe too much for that, especially if you’re paying out of pocket.

Are you a fan of Tangierine Cafe, or is it too adventurous for you? Or, have you never tried it because you assumed it wouldn’t appeal to you, but are willing to give it a try after reading this review? Do you agree or disagree with our review? Any questions we can help you answer? Hearing your feedback–even when you disagree with us–is both interesting to us and helpful to other readers, so please share your thoughts below in the comments!