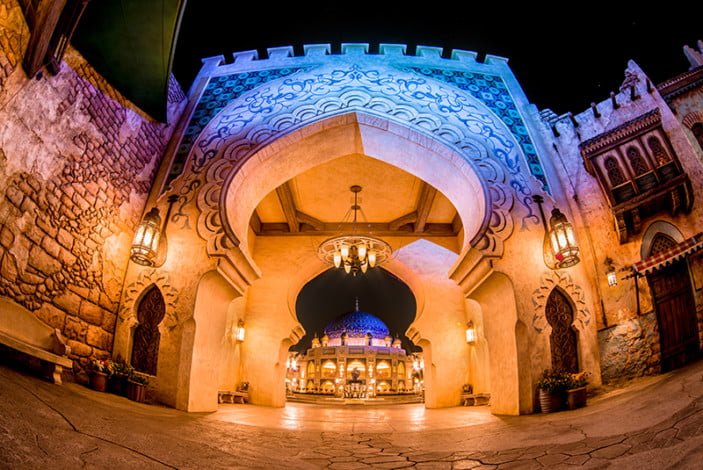 Arabian Coast is one of the ports of call at Tokyo DisneySea, and despite it being home to my favorite Disney attraction in the world, one of the best counter service restaurants, a delightful snack, and some exceptional thematic work, it often flies under the radar.

In this post, I seek to rectify that a bit, bringing attention to 7 of my favorite things about Arabian Coast. By focusing on one of the less heralded ports at Tokyo DisneySea, I’m hoping to highlight aspects of the park many of you may not even know about. It’s part of my ongoing mission to convince as many fans as possible to visit the best Disney theme park on the planet.

Like the first installment into this series, my Top 7 for Tomorrowland at Magic Kingdom, think of this as a cut-rate Top 7 Must Sees, but with me instead of Stacey, and the random things I like instead of useful suggestions. (Note that this series won’t always be lands–an upcoming installment is background music, per your suggestions. So, if you have other suggestions, please share them in the comments.)

I’ll share some of the reasons why I love Arabian Coast at Tokyo DisneySea. Fortunately, the things over which I obsess in this port are not quite as obscure and random. With that said, let’s take a look at my favorite things about Arabian Coast… 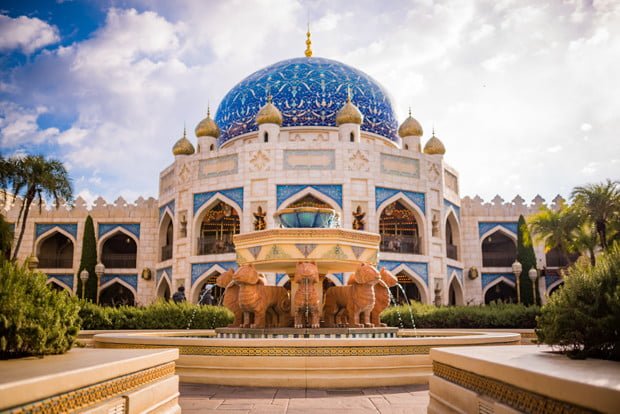 7. Spinner Rides – Now, you’re probably thinking that we’re grasping at straws if I’m including spinners, which are attractions we often dismiss on the blog. Jasmine’s Flying Carpets and Caravan Carousel are what you’d get if you took basic spinner attractions and gave them a John Hammond-sized budget, allowing Imagineers to throw caution to the wind and build the spinners of their dreams.

Just look at the double-decker Caravan Carousel above. It looks like some sort of lavish palace, not a simple carousel. More importantly, that second story offers beautiful views of the land (as does Jasmine’s Flying Carpets) and is a must-do for us. Spinner rides can make for good filler, and this land is a lesson in how to do these “simple” amusement park staples the Disney way. 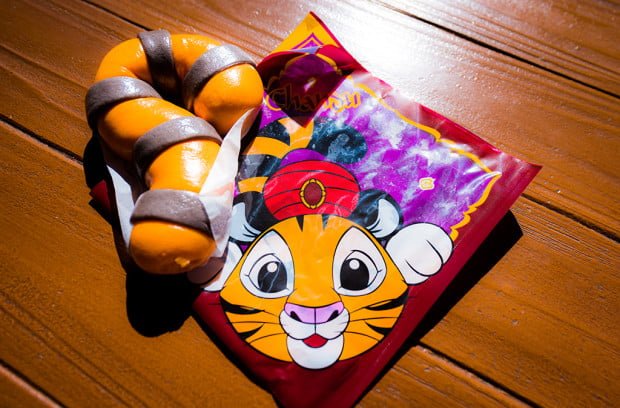 6. Chandu Tails – One of the best snacks at Tokyo DisneySea, but really, the entire Sultan’s Oasis is the best Disney snack stand you’ve never heard of. The feature item is the Chandu Tail, based upon the delightful tiger sidekick from Sindbad’s Storybook Voyage. These These are steamed chicken cream buns that are incredible–that description doesn’t do justice to how good they taste.

Rounding out the menu at Sultan’s Oasis are items such as the Maple Cream Balls, Curry Soup, Sultan’s Sundae, and Milk Ice Cream. It’s all excellent. 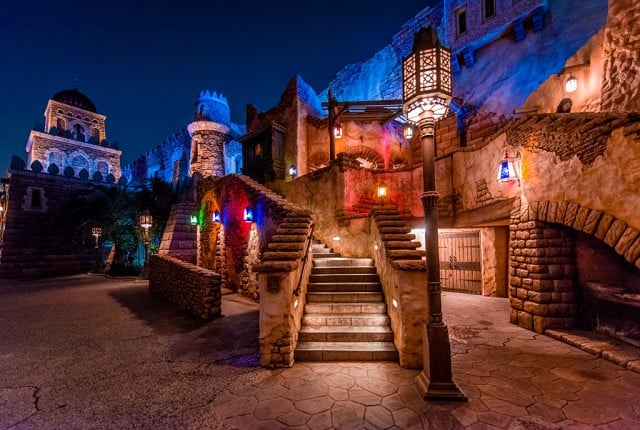 5. One Thousand and One Nights – Arabian Coast is one of my go-to spots at night. Being at the back of Tokyo DisneySea, far removed from the mayhem of Fantasmic and not having any E-Ticket draws, it’s always the first land to clear out. When it does, the hustle and bustle of the marketplace gives way to a sense of calm…and downright eeriness.

The already intense texture of the brick and clay is further enhanced by the ornate light fixtures, which bathe the ground in patterns of shadow and light. The details, gags, and nods to Aladdin and One Thousand and One Nights are easier to spot. At night, I love sitting in the outdoor seating area of Casbah Food Court, and also standing on the upper stairs that exit Sindbad’s Storybook Voyage, looking out on Mermaid Lagoon and Mount Prometheus. 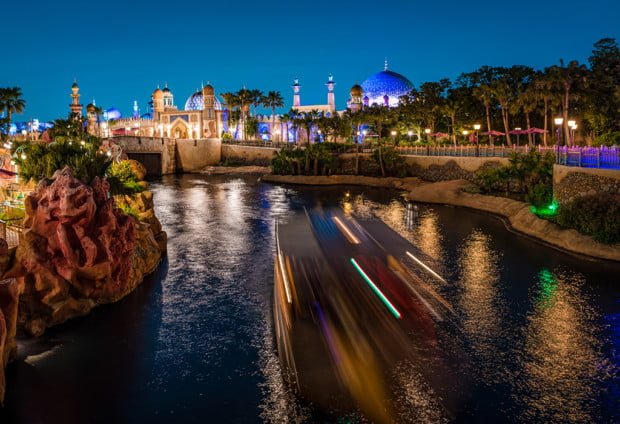 4. Background Music – To my knowledge, there are at least 3 background loops in Arabian Coast: one for the main areas of the port, one for inside Casbah Food Court, and one for the queue of Sindbad’s Storybook Voyage. They all have similar arrangements, and are each pretty strong.

My favorite of these, unsurprisingly, is Sindbad’s Storybook Voyage. This weaves the ear-worm attraction score into the loop, and gets me hyped to sail around the world with a tiger meeting cool monkeys, a whale, genie, etc. along the way. Or, sit at my computer and type posts like this, as the case may be. For the main loop, someone finally found a use for the direct-to-video Aladdin and the King of Thieves, as much of the music is pulled from that. 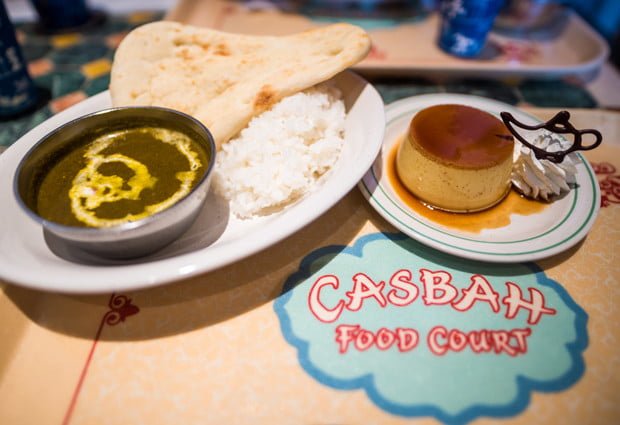 3. Casbah Food Court – You can tell a lot about a Tokyo Disney Resort fan based upon whether their go-to curry spot is Casbah Food Court or Hungry Bear Restaurant. Okay, not really. We love both the mild Japanese curry at Hungry Bear, and the spicier Indian curry at Casbah. The shrimp curry, in particular, is a favorite of mine here.

As with the rest of Tokyo DisneySea, this restaurant shines as much in its theme as it does cuisine. The seating area spans from the peasant street-merchant side of Arabian Coast to the royal courtyard, and each of the numerous seating areas moderately transitions to stay in step with the theme. This means you can dine in a low-key (yet highly-detailed) “street rat” side of Arabian Coast, or dine in style like Princess Jasmine. (We go for the royal side during the day, and the pauper side at night–but that’s just us!) 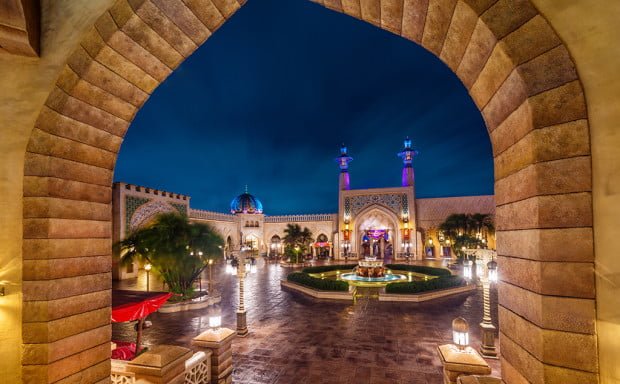 2. Agrabahian Architecture – Not only does Arabian Coast offer a symposium in spinners, it offers a master class in themed design with elements from an animated film. In bringing to life the fictional world of Agrabah, the Imagineers didn’t just throw in 20-foot tall Aladdin and Genie statues or other in-your-face props as a, “SEE? This is supposed to be the world of Aladdin!” gesture.

Instead, they weaved together real-world Middle Eastern and Indian architectural styles with an exaggerated sense of whimsy and design flourishes from the movie. The end result is like Disneyland’s Fantasyland in that it successfully evokes both the real world and Aladdin. Arabian Coast has its own brilliant sense of place, and whether you’re walking through the tight alleyways of the bazaar to the vast open-air courtyard, you feel like you’re a part of that world.

This section really doesn’t do justice to the brilliance of Arabian Coast’s execution of theme, but it’s exceptional. I have a very difficult time choosing a favorite port of call at Tokyo DisneySea, but Arabian Coast is definitely up there as my favorite. It’s certainly more under-the-radar than Mysterious Island or American Waterfront, but it’s in the same league as both of those superlative ports. 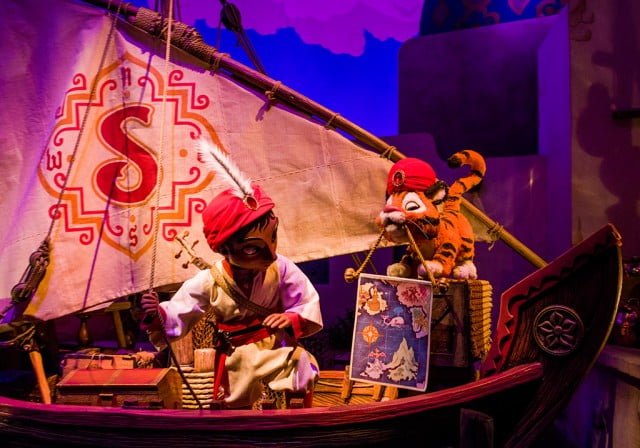 I probably don’t need to gush about it any further here, as it’s the only attraction about which I’ve written a post calling it Disney’s best modern dark ride, and another post reminding everyone that it’s still awesome. (Most attractions don’t have a single dedicated post on this blog–nothing else has two.)

From the number of Audio Animatronics to the catchy Alan Menken song to Chandu to the other adorable critters and so much more, Sindbad’s Storybook Voyage is a pure delight. This ride alone is worth the trip to Japan. (Fortunately, there’s so much more at Tokyo Disney Resort that you can do, too!)

Have you visited Tokyo DisneySea? What were the highlights of Arabian Coast for you? Do you agree or disagree with what’s on my top 7 list? Any quests for future list topics? Any questions? Hearing feedback about your experiences is both interesting to us and helpful to other readers, so please share your thoughts below in the comments!