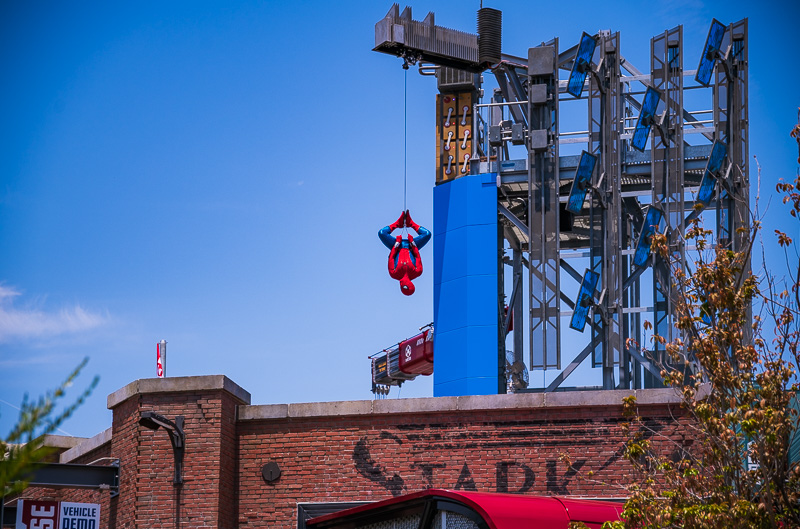 Web Slingers: A Spider-Man Adventure in Marvel’s Avengers Campus uses a virtual queue, unlike other attractions at Disney California Adventure that only use standby lines. Here, we’ll offer info, tips, and everything you need to know about the system that’ll be used via the Disneyland app. (Updated November 4, 2021.)

“The standby line access for Web Slingers: A Spider-Man Adventure may be available at park open and again after boarding groups have been called for the day. Check attraction listings to learn if current attraction access is via virtual queue or standby line.” At least for now, that renders a lot of the specifics in this guide to the virtual queue for Web Slingers: A Spider-Man Adventure irrelevant…

To experience Web Slingers: A Spider-Man Adventure, guests are required to join the virtual queue, only accessible via the Disneyland mobile app. Distribution times for virtual queue enrollment are daily at 7:00 am and 12:00 pm (noon) Pacific.

In order to give as many guests as possible the opportunity to sling webs alongside Spider-Man, each guest can enter the virtual queue no more than once per day. 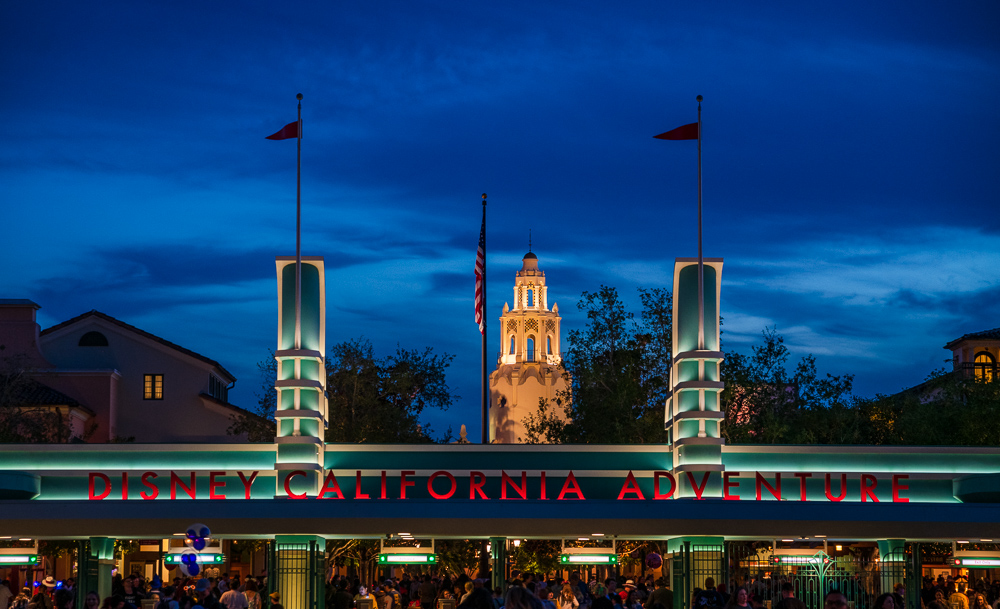 Guests with a valid ticket and theme park reservation who start their day at Disney California Adventure can access the virtual queue system via the Disneyland app and check for an available boarding group starting at 7:00 am on the day of their park reservation. Since the park isn’t open then, this can obviously be done from home, a hotel room, or literally anywhere else.

Guests who were unable to join a boarding at that time may check for an available boarding group again at 12:00 pm. Disneyland.com currently includes the verbiage that this can be done from anywhere, but that might be an error–if this works the same way as Rise of the Resistance, you’ll need to have entered DCA or Disneyland first. We’ll update this accordingly once we’ve confirmed one way or the other. 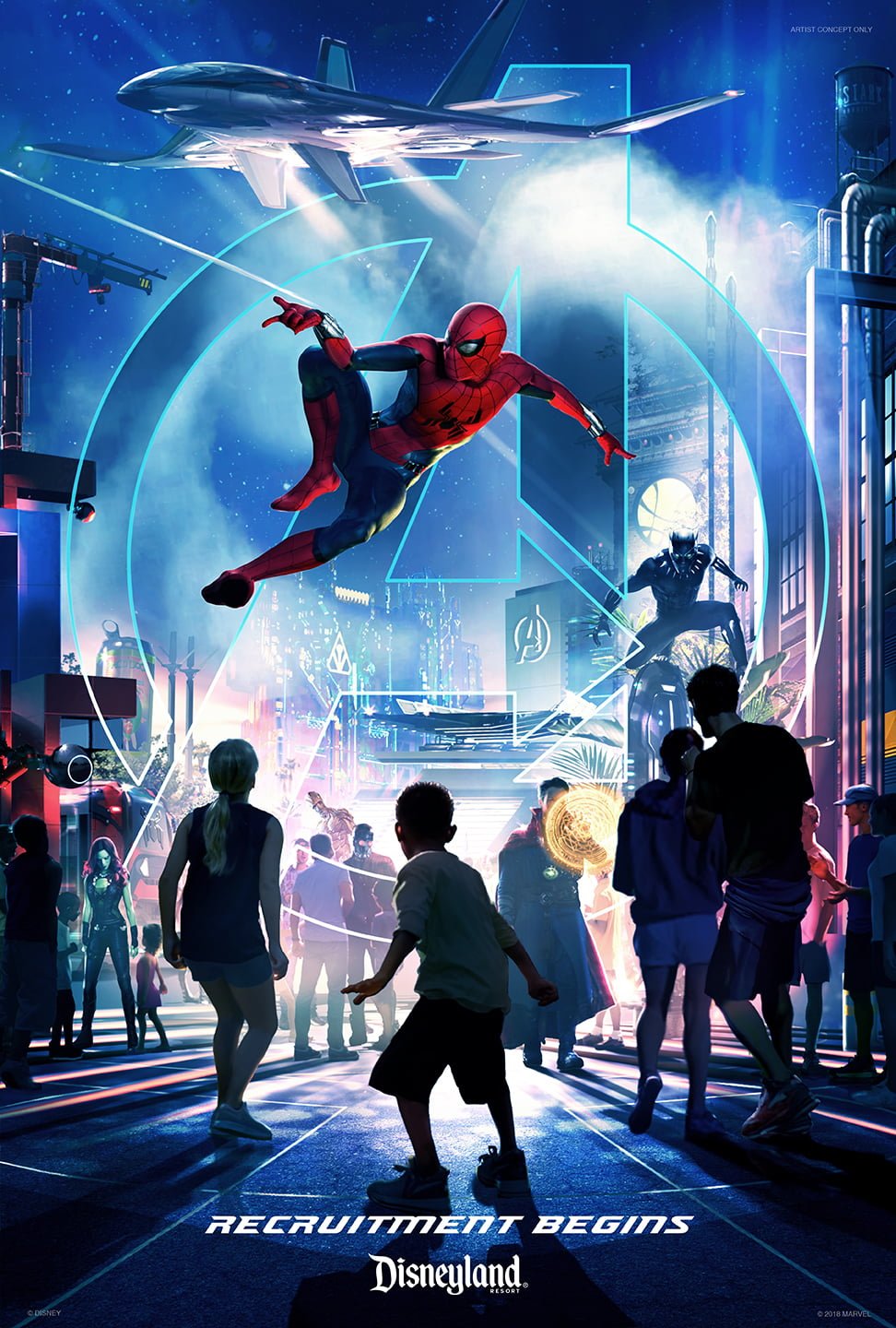 To access the virtual queue beginning at 12:00 pm, guests must have a valid ticket and park reservation, and have entered Disney California Adventure or Disneyland with a Park Hopper ticket by that time. Guests beginning their day at Disneyland may then enter Disney California Adventure with their Park Hopper ticket after 1:00 pm for their boarding group.

Regardless of when you join the virtual queue, you’ll receive a push notification via the Disneyland app when your boarding group is called to return. You’ll have up to an hour from the time of the alert to go to the entrance of Web Slingers: A Spider-Man Adventure.

The only way to experience Web Slingers: A Spider-Man Adventure is with valid admission into Disney California Adventure Park and via the virtual queue. No standby lines are available. Access to a boarding group is subject to availability and not guaranteed. Distribution times are subject to change or cancellation. 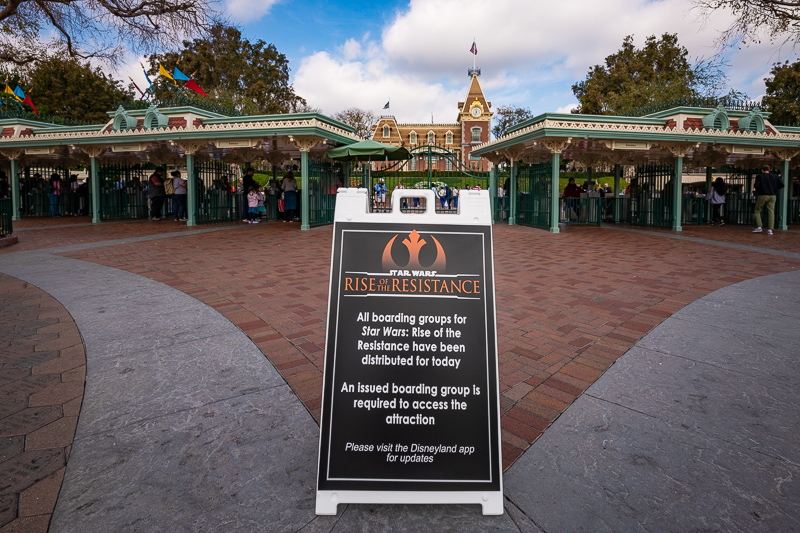 In terms of strategy, our advice here is similar to what’s contained in our Guide to Star Wars: Rise of the Resistance at Disneyland. Keep in mind that Web Slingers: A Spider-Man Adventure hasn’t opened yet, so we’ll supplement this once it does.

However, there are a few things we know are important to successfully scoring boarding passes in any virtual queue. This advice will almost certainly translate to Web Slingers and any other virtual queue that Disneyland adds in the future… 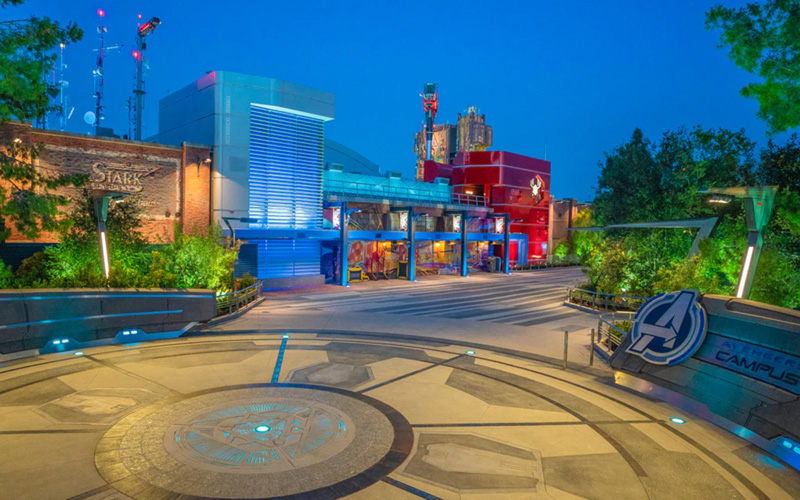 First, it’s important to optimize to ensure your timing is accurate and your phone and internet connection are as fast as possible. This might sound like overkill, but milliseconds matter. We’d recommend doing a quick speed test a few minutes before it’s time to join the virtual queue.

Anything at or above 50 Mbps should be sufficient, but the higher the better. If necessary, move around to get away from other people or increase your speed to that threshold. Additionally, test on both WiFi and cellular to see which is faster and use that. 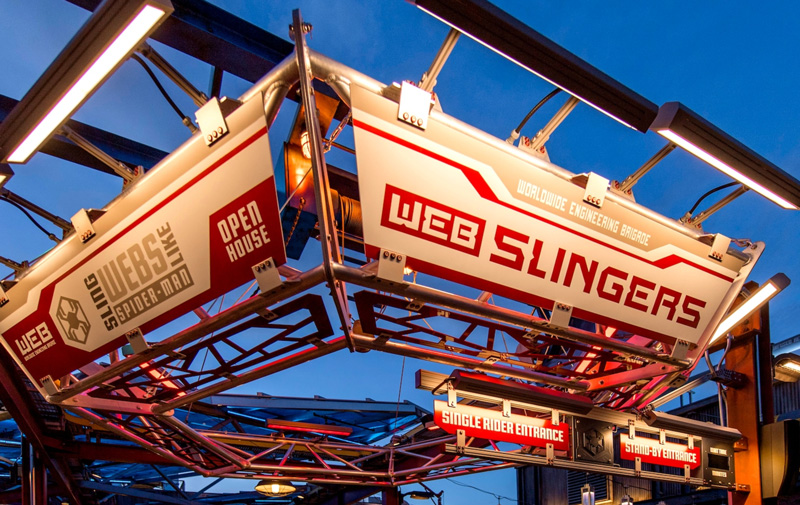 Second, make sure your phone is fully updated and force close all apps, including the Disneyland app shortly before it’s time to join the virtual queue. This will speed up your phone so there’s no lag on your end.

Finally, double-check the time on your phone or watch against time.gov, which is what Disneyland uses for opening the virtual queue. Attempt to join the virtual queue for Web Slingers the second the clock on time.gov hits 7 am or noon. These three simple steps can often be the difference between success and failure!

In terms of commentary, the big question among readers is likely going to be whether this virtual queue system is the future of attractions at Disneyland and Walt Disney World. We highly doubt it.

Star Wars: Rise of the Resistance debuted with a virtual queue during normal operations because it was (and still is) highly unreliable, inefficient, and prone to hour-plus breakdowns. The normal FastPass system was thus not viable, because it was not sufficiently dynamic to handle the aforementioned downtime.

If guests had a 4 pm to 5 pm return time, for example, but the ride broke down for the duration of that time, it would create a backlog that would impact every fixed return time thereafter. The fluidity of untimed boarding groups does not totally resolve those problems, but it’s at least a “lemonade out of lemons” solution.

It’s possible that Web Slingers: A Spider-Man Adventure has a virtual queue because, like Star Wars: Rise of the Resistance, it’s unreliable and breaks down a lot. However, we highly doubt it.

Star Wars: Rise of the Resistance utilizes multiple, innovative ride systems and it has a lot of “moving parts,” so to speak. Web Slingers: A Spider-Man Adventure is not that complex. Unless something has gone terribly wrong since we last heard about its ride system, the attraction should be fairly reliable. Last minute problems could’ve arisen, but that seems unlikely. 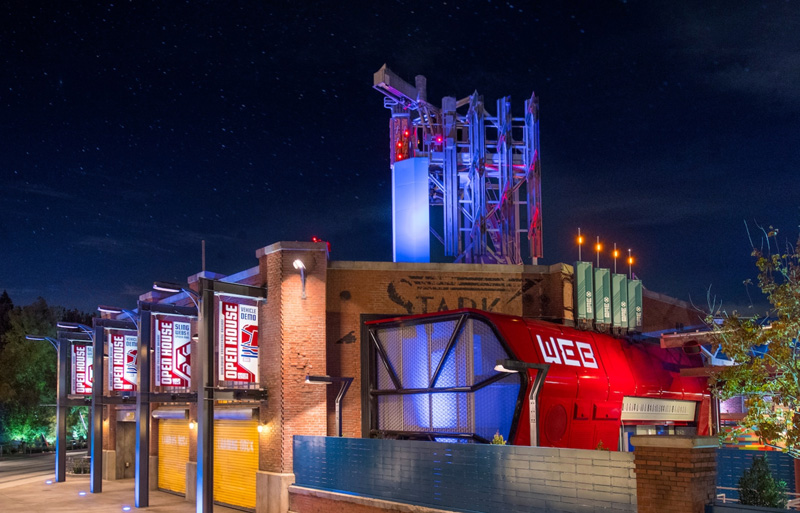 What’s more likely is that Web Slingers: A Spider-Man Adventure is opening during a time of physical distancing. This means a few things: attractions are leaving seats unfilled, lines are longer because there’s more spacing in them, and queues are “stacked” outdoors, causing more congestion in their respective lands.

Additionally, the footprint of Avengers Campus isn’t very large and there’s minimal queue space for Web Slingers: A Spider-Man Adventure, meaning that there’s not much space for a physical queue in the new Marvel land. The ride’s popularity will need to die down a bit before it can use a standby line. 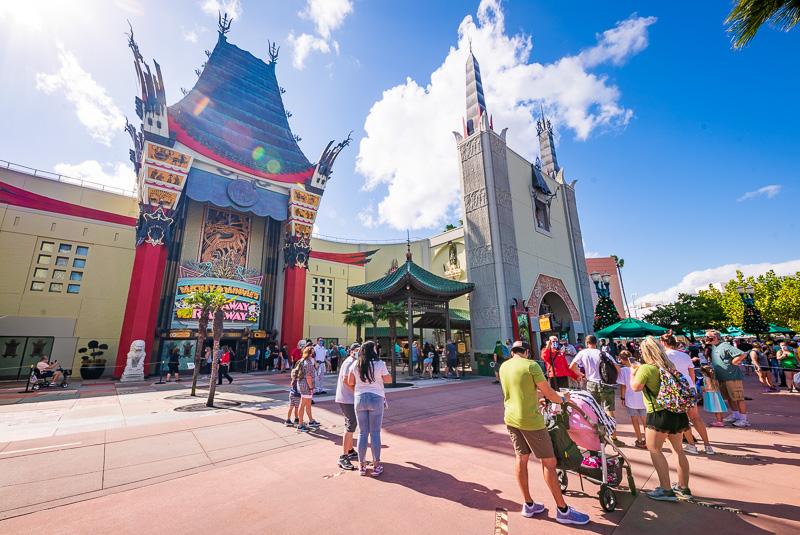 If you’re worried about virtual queues and being up at 7 am to score difficult boarding groups being “the future” of attractions, look no further than Mickey & Minnie’s Runaway Railway. This is the newest attraction at Walt Disney World, and it does not use them. That’s because it’s a high capacity, reliable attraction.

Interestingly, Remy’s Ratatouille Adventure might’ve had to use a virtual queue if it opened last year or early this year during the ‘peak’ of physical distancing in Florida. This is despite that attraction being high capacity and a reliable ride system. There, it’s all about the limited space for a physical queue back in that expansion of the France pavilion. 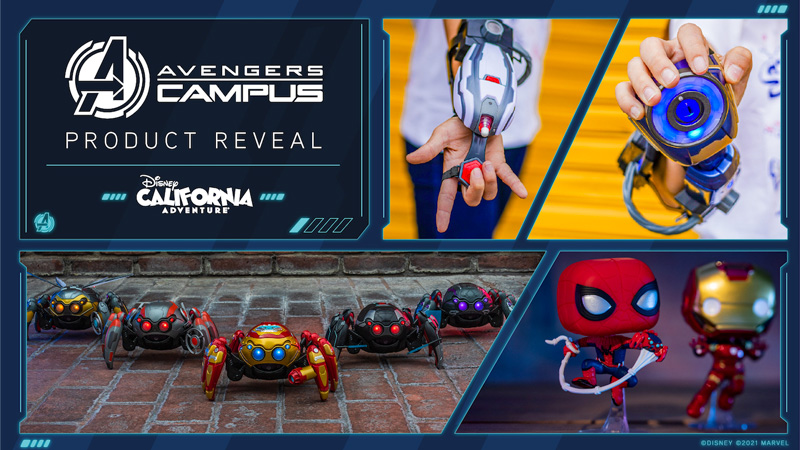 That’s the optimistic perspective, and probably the (more or less) accurate one. The pessimistic perspective is that Disneyland won’t be quick enough to evolve its system on the fly, and the virtual queue will remain in place all summer and prevent guests from riding multiple times per day even when such restrictions are unnecessary. As a side note, it now becomes even more difficult to justify buying the WEB Tech toy-to-life accessories!

Are you looking forward to Web Slingers: A Spider-Man Adventure? What are your thoughts on the virtual queue? Worried that this is going to be common for future attractions, or agree that it’s likely a temporary thing resulting from physical distancing? Are you planning a visit to Disneyland Resort for the opening of Avengers Campus, or will you wait until later? Do you agree or disagree with our assessment? Any questions? Hearing your feedback—even when you disagree with us—is both interesting to us and helpful to other readers, so please share your thoughts below in the comments!