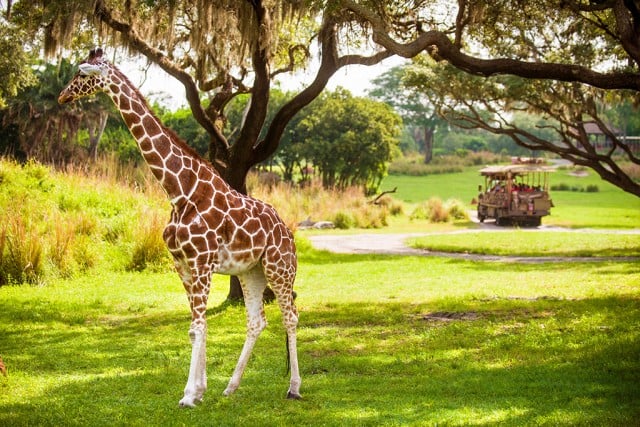 On the last day of our Walt Disney World Memorial Day trip, we elected to go to Animal Kingdom. I had wanted to go there earlier in the trip, as the park was open until 8 pm over the weekend, which meant potential night photography there. That didn’t work out, so we were left with a half day in the park. We were both hoping for more time there, but it seems Animal Kingdom is often the park that draws the short straw from us, even if that isn’t our intention.

As you may know, I had a change of mind about Disney’s Animal Kingdom after spending more time than normal there last year, which I wrote about in the article “I Was Wrong About Disney’s Animal Kingdom.” That post was surprisingly popular (I think you all just like it when I’m wrong, but as Sarah will tell you, that’s fairly often) and I spoke more to the topic on the Animal Kingdom-centric podcast, Radio Harambe. While I no longer view Animal Kingdom as a half day park, it feels incomplete for me, and it’s missing that special something that I can just do over and over again to kill time.

Something like the PeopleMover, Country Bear Jamboree, or Carousel of Progress in Magic Kingdom, and American Adventure, Living with the Land, or Impressions de France in Epcot. About the closest thing Animal Kingdom has is eating Flame Tree BBQ ribs at the spot that overlooks Expedition Everest. This is probably largely because I haven’t spent enough time in Animal Kingdom to really feel an emotional attachment to anything in the park. It shouldn’t feel bad (assuming theme parks have feelings), as Disney’s Hollywood Studios is about the same for me. Although there I guess the Great Movie Ride sort of occupies that role. Sort of.

I am really hopeful that the boat ride that’s coming to AVATAR Land will fill that void. I remain in the approximately .5% of Disney fans who are actually optimistic about AVATAR Land. I’m by no means a fan of the movie (I thought it was mediocre at best), but it did have some truly beautiful environments that I think will transfer well to a theme park. This is why I’m looking forward to AVATAR Land. Like I’ve written countless times, I think ultimate quality transcends source material. Meaning, if the attractions are compelling and the land is beautiful, no one will care that AVATAR doesn’t really have a fanbase or wasn’t really that good of a movie. I’m not a fan of Cars, but I love Cars Land because the environment and main attraction are great. That’s not the best example because others love Cars, which could explain why the land is a hit. A better example is Splash Mountain. I wonder what percentage of guests have the slightest idea what the source material for it is, let alone how many have actually seen it. But I digress–I know I’m not going to change any minds with any of this, as AVATAR Land is one of those topics where you’re either ‘with us or are the enemy’.

We only had limited time in Animal Kingdom that morning and early afternoon, and that time included lunch at Yak & Yeti. Unfortunately, we hadn’t made FastPass+ reservations, so we jumped into the standby line for Kilimanjaro Safaris first thing. The posted wait was only 10 minutes…although that turned out to be more like 25. Oh well, it’s worth it. 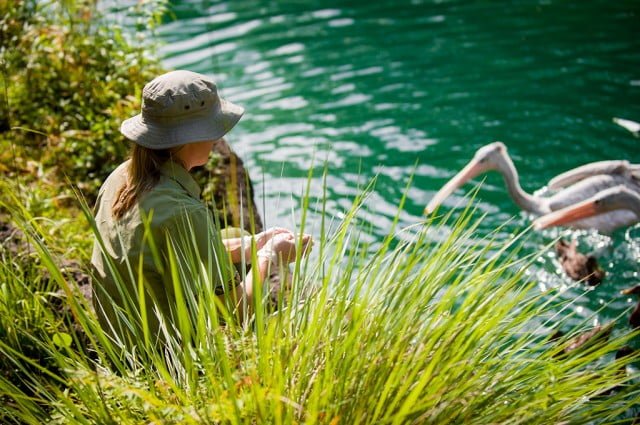 I’m going to level with you from the outset…this trip report installment is going to be dull. Some decent-enough photos, but nothing great, and I really don’t have much of interest to say. I had (what I thought) was a hilarious caption for a photo of a male bat, but Sarah said it was too immature and inappropriate to post. Fun police… 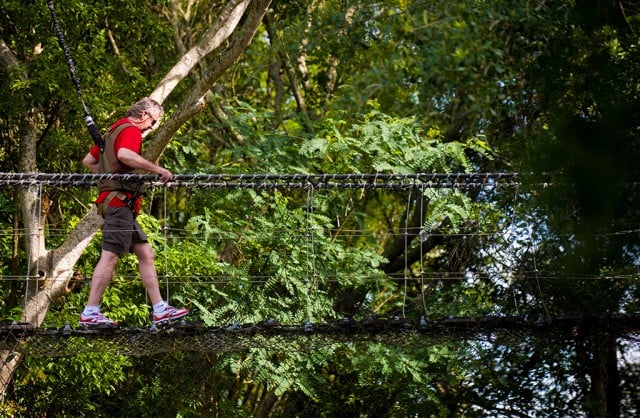 One thing that irritates me about Walt Disney World as of late is the increased number of up-charge experiences. A slew have been added this year (Harambe Nights, Epcot Wind-Down, Epcot Champagne Party, VIP tour packages, Star Wars & Frozen ‘viewing’ packages, etc.), and a couple of years ago, Wild Africa Trek was the big addition at Animal Kingdom. Wild Africa Trek looks amazing even if we can’t justify its cost right.

The substance of the trek or that it costs extra money isn’t my complaint. It’s that Disney is putting effort into adding things like this that cost additional money, while not much is added to the core product. Perhaps I’m forgetting something, but I can’t recall the last completed addition to Animal Kingdom. It would be nice if, before focusing on up-charge experiences, Disney fleshed out the park a bit more. It’s sort of the same complaint that Disney builds timeshares with great speed, but AVATAR Land was announced in 2011 and is slated to open in 2017… 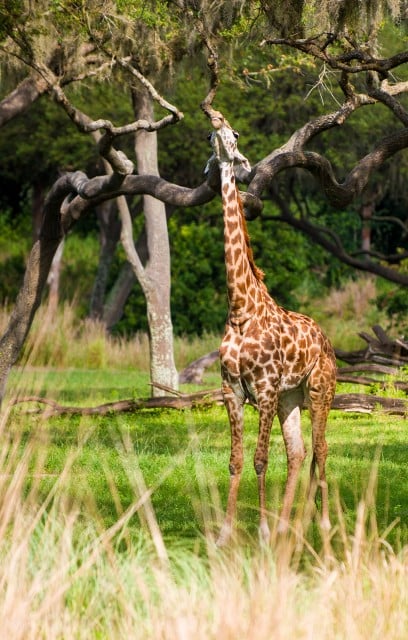 If you like giraffe photos, you’re in for a real treat. 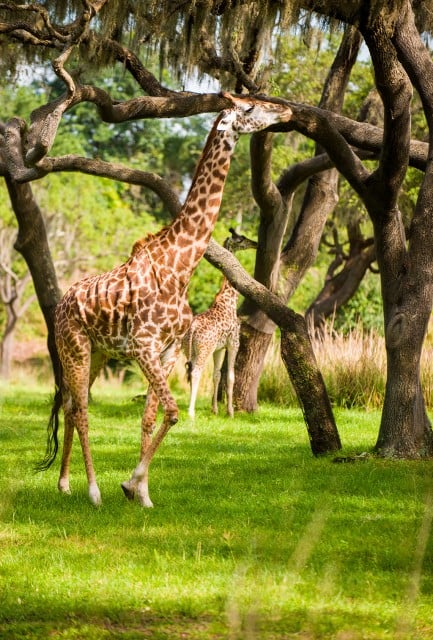 Giraffes are by no means rare on Kilimanjaro Safaris, but for some reason I took like 50 photos of the giraffes. 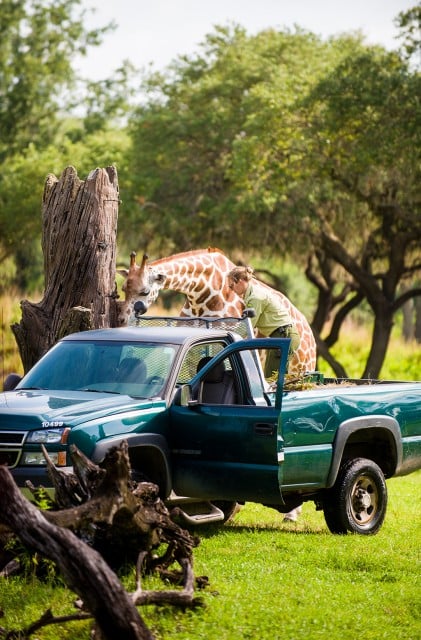 I was a bit surprised to see this Cast Member and truck just out ‘on stage’ adding feed to this location during the middle of the day. Kilimanjaro Safaris storyline has been hacked up over the years, but there still is a story to it, and this is a clear break to that. 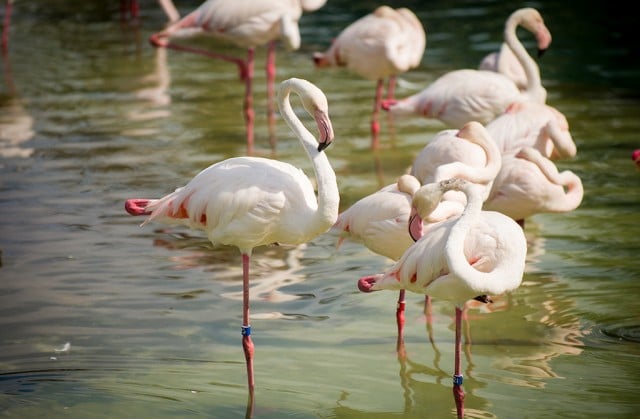 Moving on, we saw animals other than giraffe… 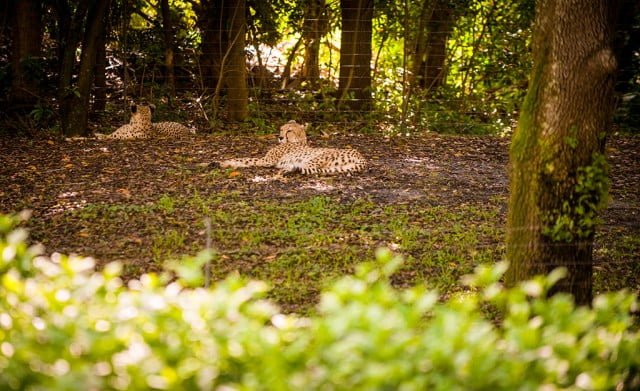 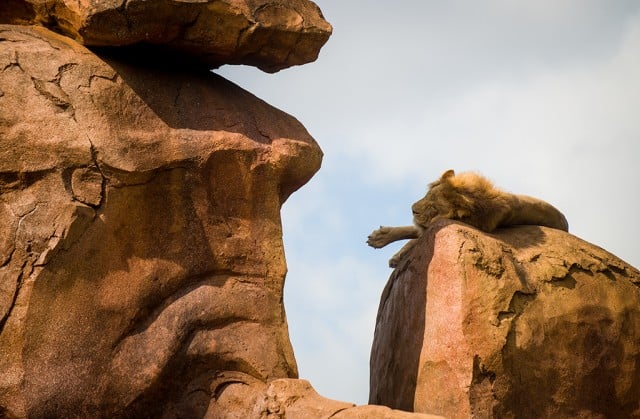 Lion, lying around. Although lions and cheetah are much larger, you can tell they are related to house cats because they all spend the bulk of their day doing the same thing: lying around. 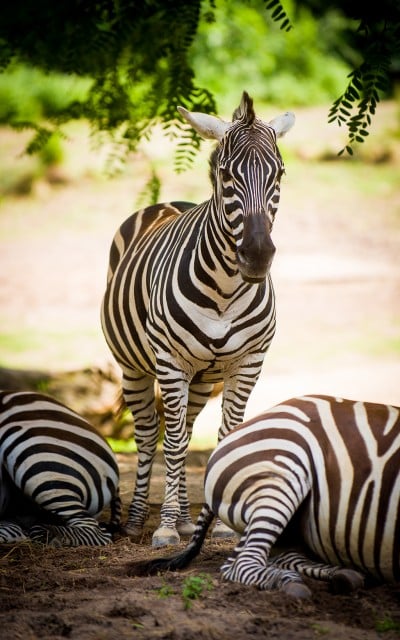 Zebra. Is there any reason science can’t make regular horses look like this? Stripes may not always be in style, but I think this would be a better look for horses than just a solid color. If those huge hats are considered fashionable at the Kentucky Derby, I would think that some owners would want to make a statement by having a horse with stripes. 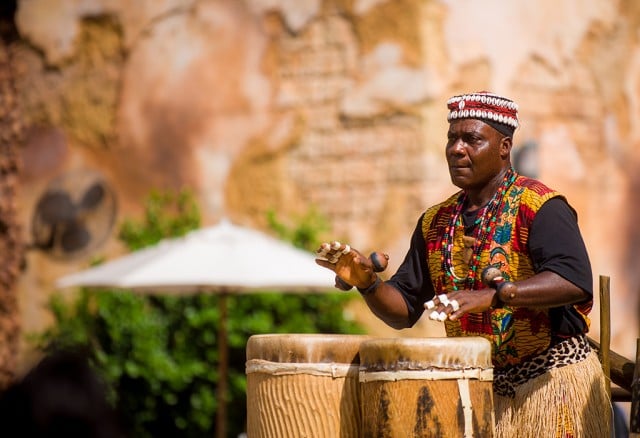 The Harambe Street Party is awesome. We love the music, which really makes this area come alive. 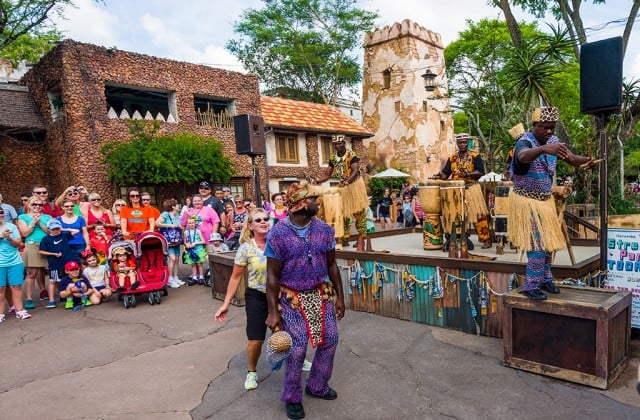 For some reason, this lady came up to the performer and basically started grinding on him with some bizarre dance. I hope she was just intoxicated, because that’s the only valid explanation for that type of dancing. I’m beyond awful at dancing, so I’m not normally one to judge… 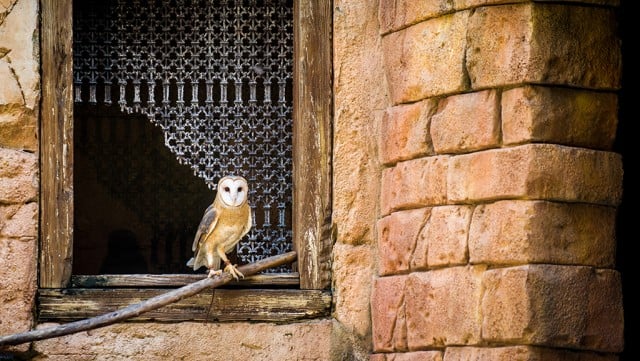 Next up was Flights of Wonder. This is a must-do for us, and unlike many shows, we think it has a ton of repeatability. Actually, I would say this, Festival of the Lion King (it wasn’t open in the new venue when we visited), and Finding Nemo: The Musical all are very repeatable. Quite the contrast to the shows at the Studios, which are mostly good, but not things I have much interest in repeating at this point. 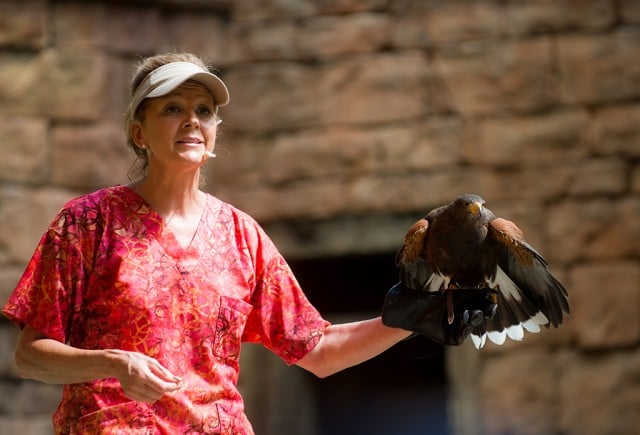 The birds are fun to watch and the performers are funny. It’s just a good time all around. 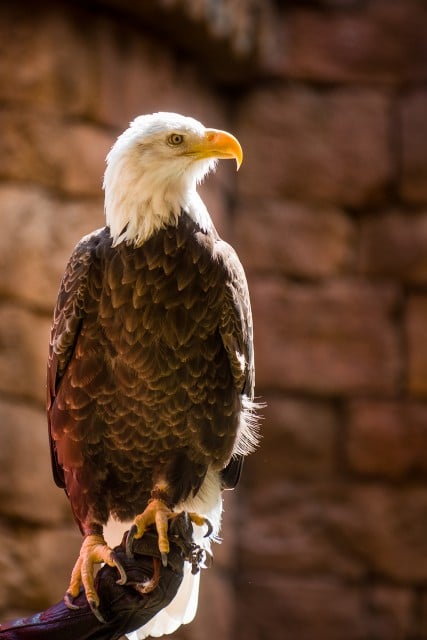 Then, of course there’s the glorious 3-hour finale featuring this hero. It would make even Stephen Colbert shed a tear. 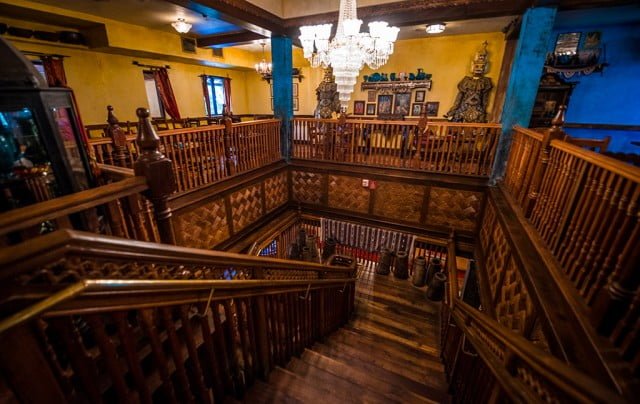 Lunch was at Yak & Yeti. We have done the counter service at Yak & Yeti before, and find it to be pretty good (Sarah ate there again with her sister recently and loved it), but have always balked at the price of the table service restaurant until this trip. 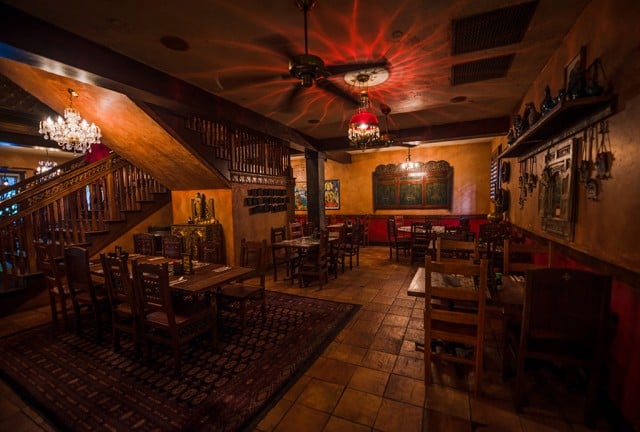 What really surprised me was the level of detail inside the restaurant. I know this is par for the course with Animal Kingdom, but Yak & Yeti is operated by a third party. I wonder how the arrangement for that works…does the third party foot the bill for all of the design work? I can’t see that happening. My guess is that they pay part of the cost as an initial fee, coupled with a lease for a set number of years. That’s just a guess, though. 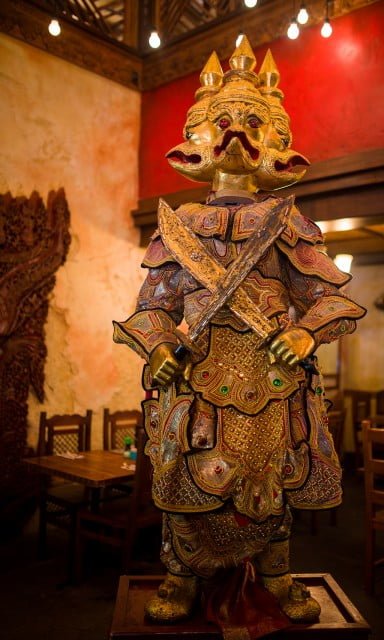 We were some of the first guests seated for lunch, so I wandered around and photographed as much as I could before more guests were seated. It’s pretty dark in there, but with the Sigma 35mm f/1.4 lens, this wasn’t much of a problem. Have I mentioned how much I love that lens?! 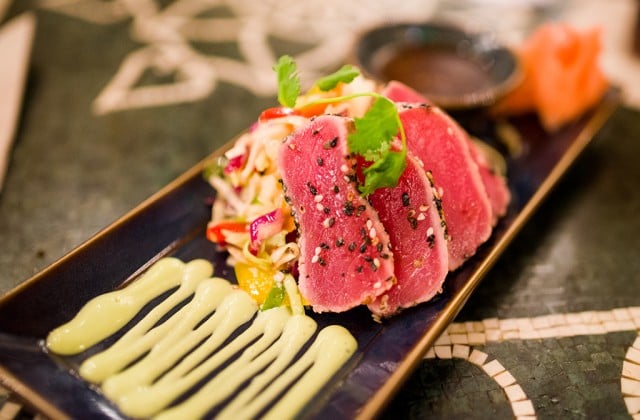 As I said, Yak & Yeti is operated by a third party. Landry’s. I absolutely, positively cannot stand Landry’s. It’s a restaurant group with hundreds of locations and different brands, and it has been slowly gobbling up independently owned and operated restaurants over the years. Two of my favorite restaurants were purchased by Landry’s, and have since have their menus dumbed-down and their quality pretty much destroyed.

Landry’s is basically the McDonald’s of sit-down dining. I don’t mean that in the good way, either. 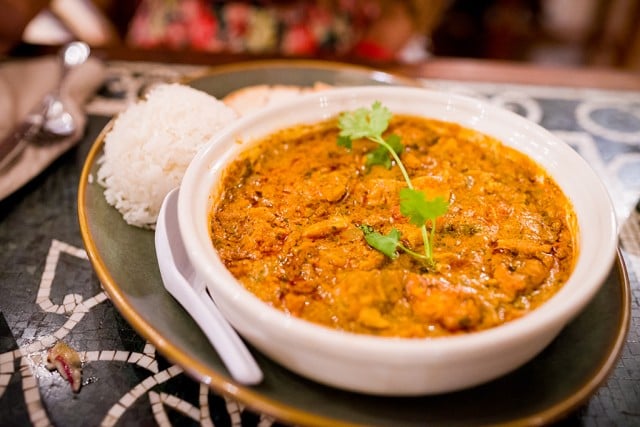 For all of my disdain for Landry’s, I was surprised to find that our meals were pretty good. They were not out of this world amazing, but good food coupled with a great environment means I’ll be recommending Yak & Yeti once I write up a full review. Recommending a Landry’s restaurant?! I’ve finally lost it. 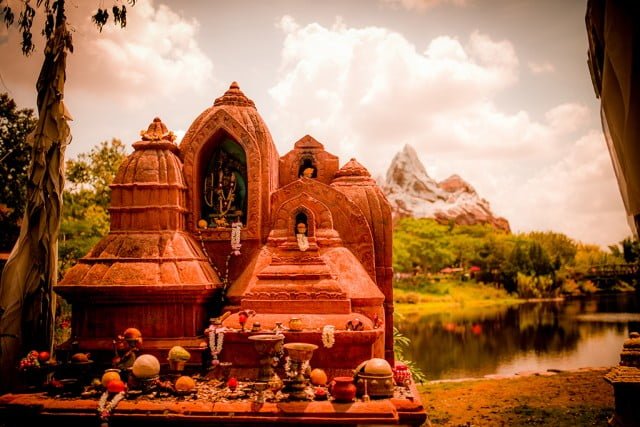 Next, we did Expedition Everest via the Single Rider line. Did you know that going backwards on a rollercoaster has been regarded for centuries as one of the best ways to help your food settle? 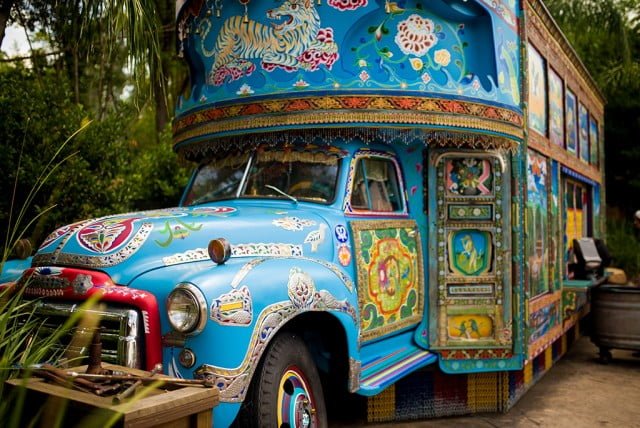 Details like this are what make Animal Kingdom great. This is, essentially, an ODV cart. Yet it’s disguised by this beautiful truck. 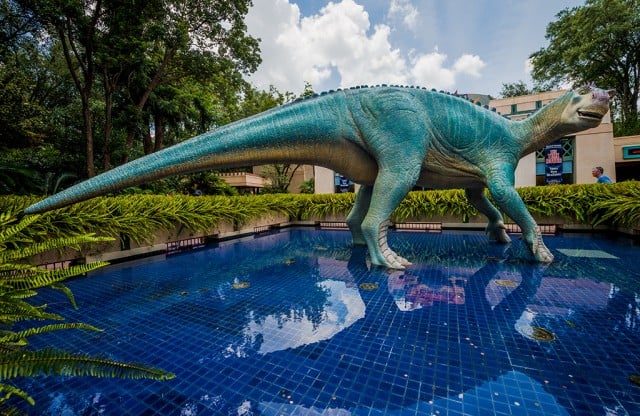 For some reason, Dinosaur had a 60 minute wait. It normally is close to a walk-on whenever we visit, so I’m going to go ahead and blame this on FastPass+ (I have no clue if that’s the real reason for the long wait, but it seems like a convenient excuse.) 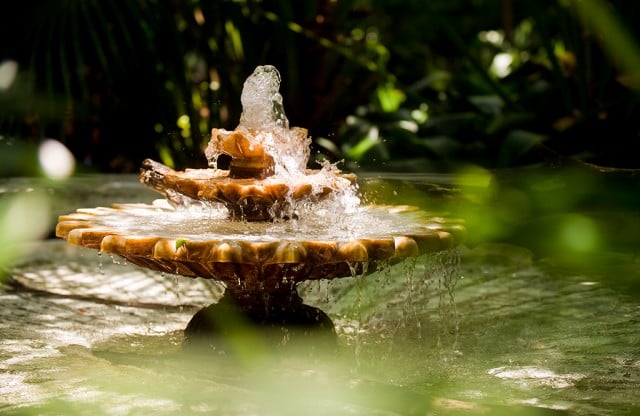 Instead, we did Maharajah Jungle Trek. This is one of our favorite things at Animal Kingdom now, and the inappropriate bats have nothing to do with why we like it so much. Okay, they have a little to do with it. We are very immature. (Don’t act like you don’t chuckle when you see that…) 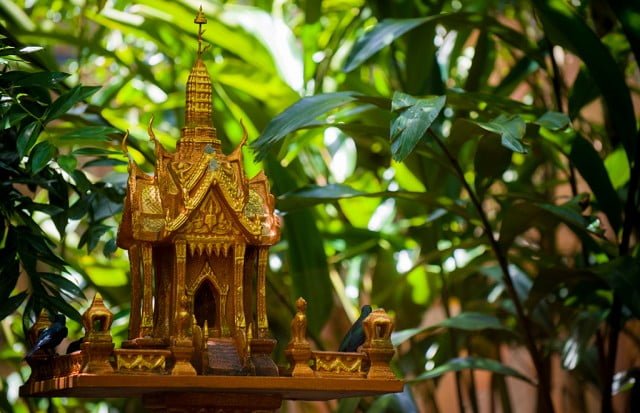 If I were a bird, I would definitely want to live here. 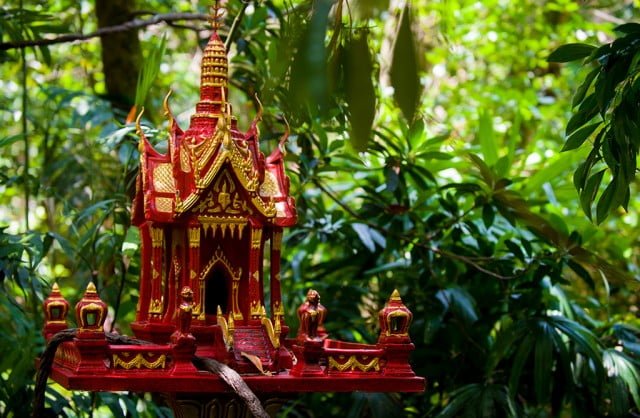 Since I try to anthropomorphize animals for my own entertainment, I’d imagine an intense, Game of Thrones-like situation involving the birds and their quest to rule over each of these houses. 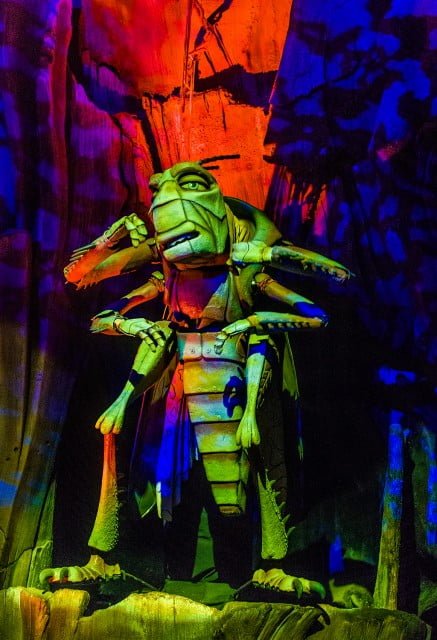 We ended the trip by seeing It’s Tough to be a Bug. It had been a while since we had seen this show, but it remains excellent.

After that, it was to the bus stop and back to All Star Music, where we waited for Disney’s Magical Express. All in all, and complaints aside, we really had a great trip. This was the most time (~5 days) that we had spent in Walt Disney World in a few years, and it was definitely nice to do more than just the weekend trip. Walt Disney World will always be our home resort, and it’s always good to be back home. I’m already in the midst of planning a return trip, but this time, it will just be me as I’m visiting for a photography trip while Sarah is on a mother-daughter trip with her mom. Walt Disney World is our place, so visiting without her will be a big change, but I’m also excited at the prospect of a photography-centric trip…and to see Diagon Alley.

What do you think of Animal Kingdom? Are you a fan of Landry’s and its trail of destruction? Share your comments on any of these things—or anything else from the trip report—in the comments!