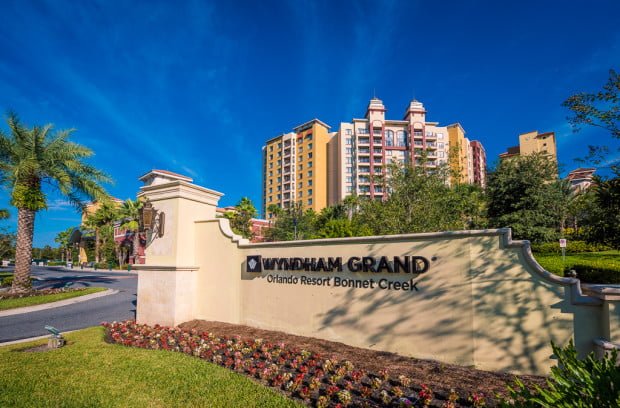 Wyndham Bonnet Creek Resort is a hotel in Orlando on Walt Disney World property. This review features photos of the rooms, common areas, and amenities, plus the pros and cons of the resort, and my thoughts on staying here. But first, I want to start by regaling you with the legend of Ling Kai Kung, who is sure to attain folk hero status in no time.

The story of Walt Disney quietly purchasing the property that would become Walt Disney World is pretty well known at this point. What isn’t so well known is the story of Bonnet Creek, the parcel of land on Walt Disney World property that Walt Disney didn’t buy, because he couldn’t locate the foreign mystery owner. This mystery owner was Ling Kai Kung, who had acquired the property 2 years prior to Mr. Disney’s Florida purchases, because he felt it would have future value as a warehousing district. That’s right–years prior. Now who is the true visionary?!

Now that you know about Mr. Ling’s great vision that helped make Wyndham Grand Orlando possible, let’s see if his legacy is upheld with this hotel… 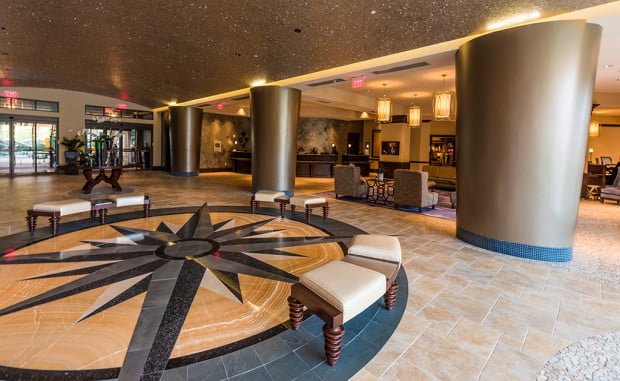 Let’s start with the amenities and common areas at the Wyndham Grand Orlando Bonnet Creek Resort. The lobby combines clean modern and classic styles in a manner that errs on the conservative side in terms of making a first impression. Anyone who walks in can tell the hotel is high-end, but you get no sense of style or place. 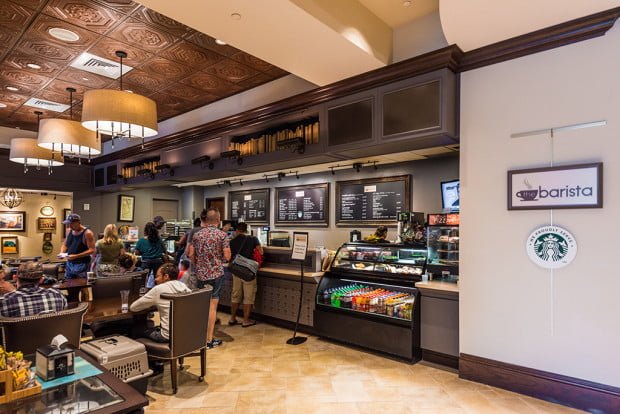 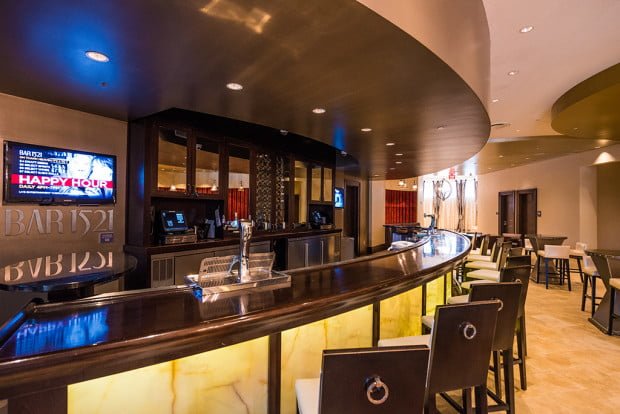 This is Bar 1521. Trendy name, or is this literally the 1,521th liquor license issued in Osceola County, Florida? Your guess is as good as mine. 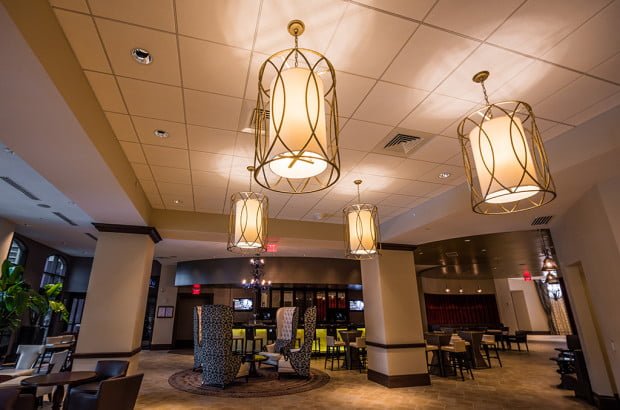 There are a total of 5 restaurants in the hotel, from the coffee shop and bar above to a fine-dining restaurant called Deep Blu Seafood Grille, with a menu reminiscent of Narcoossee’s. 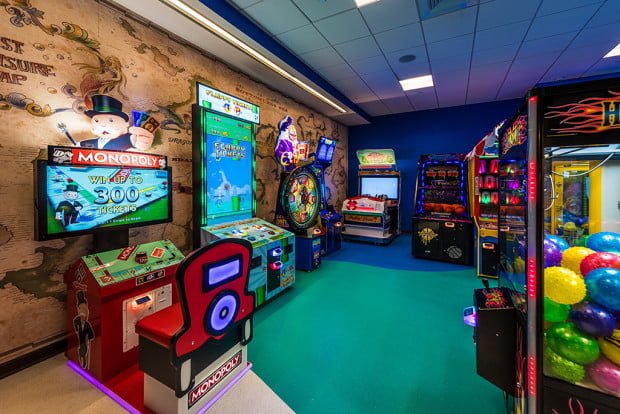 On the other end of the spectrum, there’s an arcade! Is there some powerful arcade lobbying group that has influence with hoteliers? I never see anyone in arcades, and I’m continually dumfounded that they are still a thing in hotels–especially with newer builds. 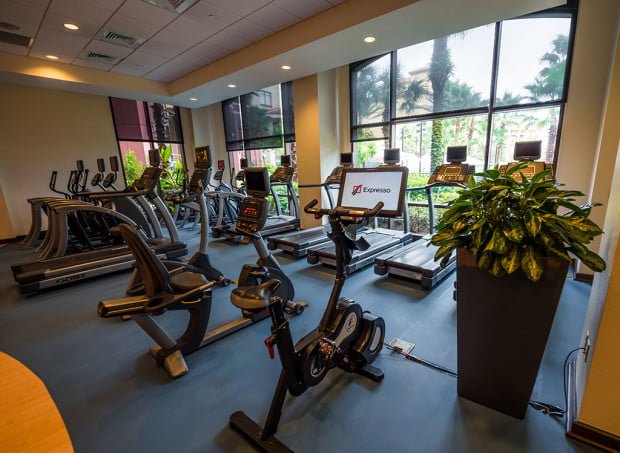 Here’s one small corner of the fitness center, which is actually quite spacious, having a well-rounded set of modern equipment. Unlike the arcade, there were a lot of people using this, and I didn’t want to be the creepy fully clothed dude taking photos of people in workout attire. 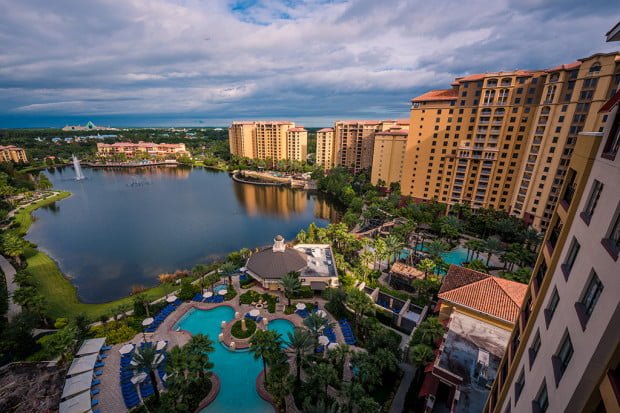 The pools are the last major amenity. The one on the resort side of the Wyndham is nice–a large pool with a neat layout and relaxed vibe. It doesn’t hold a candle to the super-cool pirate area at the Wyndham timeshare next door (hotel guests can use that pool), though. Unfortunately, pirate ship pool area was closed during our visit for refurbishment. Presumably, an epic cannon battle had caused some leakage issues. 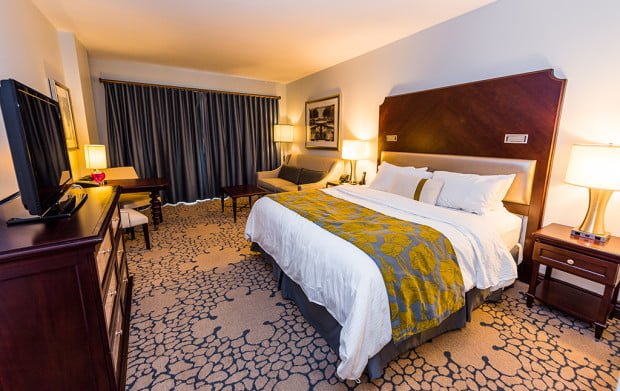 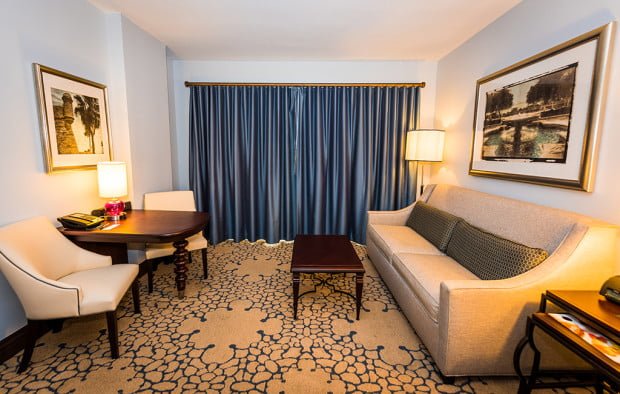 However, this is not to say it’s perfect. One of my major issues with high-end hotels is when they phone it in on the style front. Wyndham purports to be a “secluded Mediterranean-style hideaway.”

I guess you could say the style is vaguely Spanish-modern, but more than anything else, it’s just bland and cookie-cutter. It reminds me of a McMansion furnished entirely by Crate & Barrel. Upon walking in, you know the place is expensive, but it lacks character. 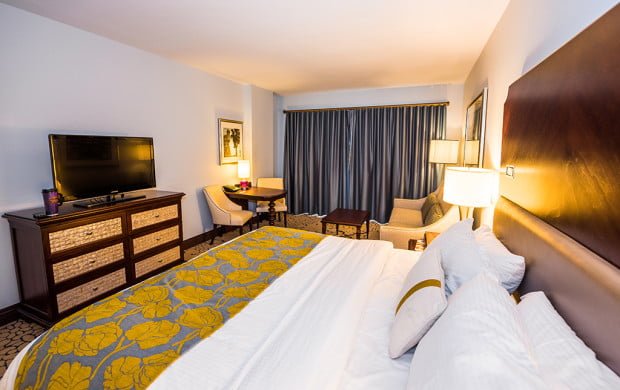 This probably doesn’t matter to a lot of people–the hotel is unquestionably nice, modern, clean, and comfortable. Wyndham is a reliable and high-end chain, and from a comfort and quality perspective, superior to even Walt Disney World Deluxe Resorts. My problem is that everything about the hotel is totally forgettable. 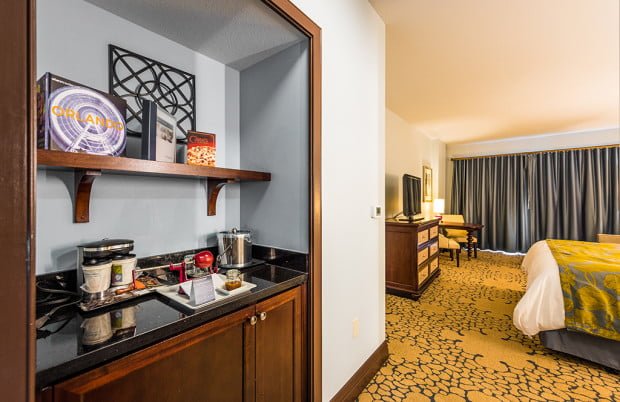 I do think this is worth mentioning, though, as the proliferation of boutique hotels, and even the rapid increase of boutique arms within major chains is indicative of a desire for unique accommodations. In fact, Wyndham itself pitches its Grand line as being ” an ensemble of distinguished hotels that are approachable by design, representing one-of-a-kind experiences in key destinations with refined accommodation.” 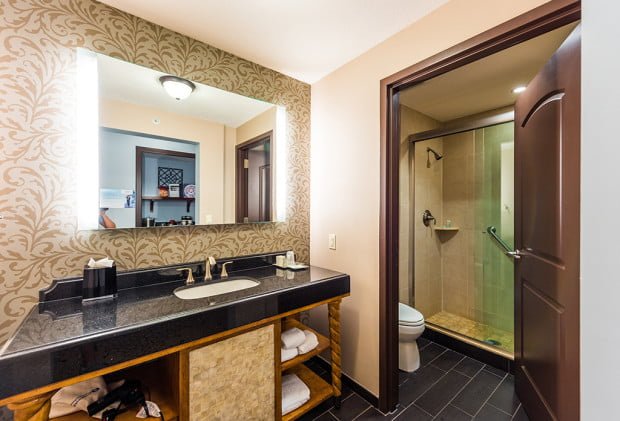 Again, though, I want to reiterate that everything about the hotel is really nice (from the lighting on the mirror to the tile-work in the shower, in the case of the bathroom). Despite my complaints about the style, I’d still rank it among the nicer hotels in Orlando.

It’s just that I think hotels of this caliber should hit high notes in terms of both form and function. I shouldn’t be able to easily replicate this same design with a quick trip to Home Goods. 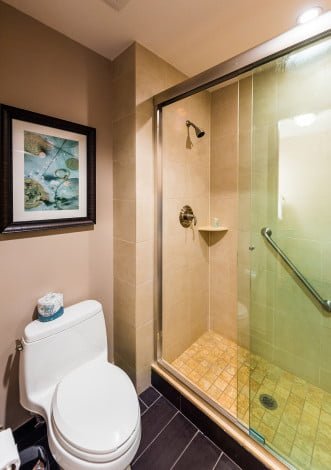 In terms of pricing, by upscale hotel standards–especially those on Walt Disney World property–the Wyndham Grand Orlando Bonnet Creek Resort is not bad at all. Prices are regularly in the ~$150/night range, but that’s before tax and the dreaded resort fee ($20/night). You can read my stance on resort fees here. Suffice to say, I hate resort fees them, and find them to be deceptive and unfriendly to consumers. (In the interest of full disclosure, our stay at this hotel was completely comped.)

Inclusive of the tax and resort fee, you can stay here for less than $200/night (I’ve seen some deals for significantly less), which makes its pricing very competitive. If you want to save more money and don’t mind staying on the timeshare wing of the resort (all amenities are shared, and the timeshare vacation rental rooms are larger), you can score rooms for ~$125/night for many seasons of the year via this listing on eBay (make sure to make a best offer–don’t pay the full price). 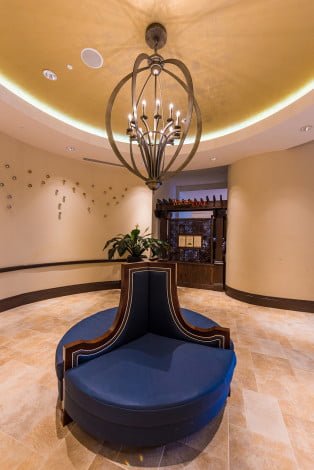 Overall, the Wyndham Grand Orlando Bonnet Creek Resort is a solid hotel with a great location on Walt Disney World property at very competitive prices. There are no missteps in terms of amenities or comfort, and at the end of the day, there is a lot to be said for reliable, upscale accommodations. However, with this reliability comes predictability, and a bland style that seems like it could be found in an Anywhere, USA Wyndham hotel.

Have you stayed at the Wyndham Grand Orlando, or any of the Bonnet Creek Resorts? What did you think? Considering staying here or another nearby hotel? If you have any questions or thoughts to share, please post them in the comments. We love hearing from readers!