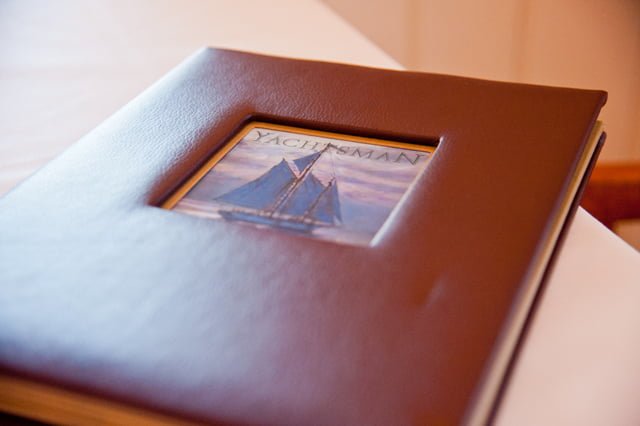 There are a few other items on the menu, but Yachtsman Steakhouse’s clear specialty is steak (hence the name…although wouldn’t its specialty be a touch more clear if they went with my proposed name?). As a signature restaurant participating in the Disney Dining Plan, Yachtsman Steakhouse is a 2-credit table service restaurant, and one of the restaurants at Walt Disney World that now requires a $10 per person deposit to secure reservations. It also accepts the Tables in Wonderland card for a 20% discount. 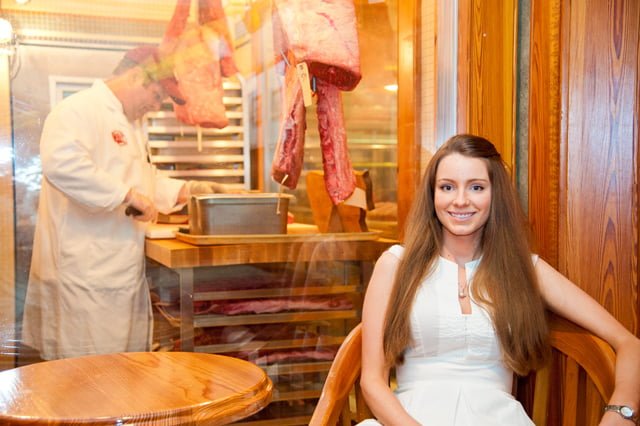 I’ve already touched upon the decor and its kitsch, but it’s probably worth discussing a bit more (and at the front of the review, to get all negatives out of the way first). Yachtsman Steakhouse looks nice with its masculine woods and understated dining room, and the highlight is when you first walk in and see a butcher room with meats aging and, when we were there, a butcher in there actually making his cuts!

However, there are also a few random accents that make the restaurant feel as if it’s stuck in the mid-1990s. I know plenty of New England restaurants have this same “look” to them, but I think Disney could convey the theme of the restaurant without the dated paintings and wallpaper. These are just little things, and it’s difficult to point to any one element of the design that made it feel dated, but I think all of these little things are more noticeable because the dining rooms are otherwise very understated. 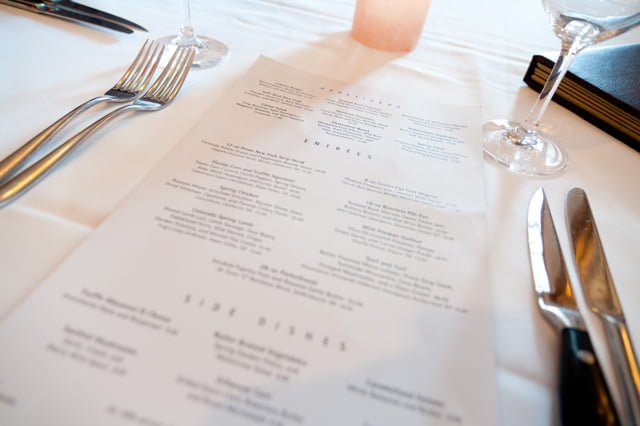 Our waiter for our meal at Yachtsman Steakhouse was Ricardo, and he was flat out awesome. He was incredibly fun, yet formal and knowledgeable of the menu. How he managed to strike this balance was beyond me, but he was basically the perfect Disney server–easily one of the best we’ve ever had at Walt Disney World or Disneyland. A bit of whimsy combined with knowledge and appropriate demeanor for a nicer restaurant. 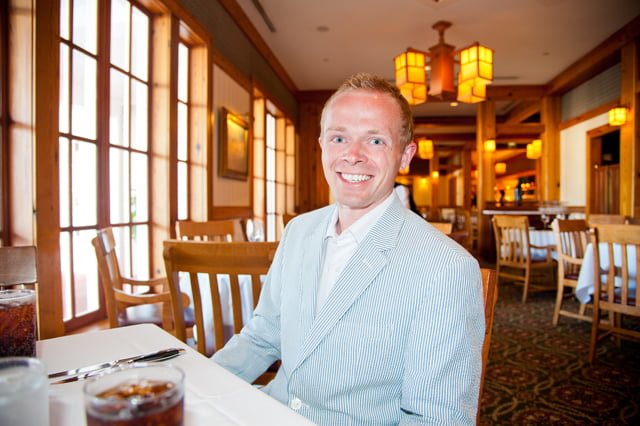 Before diving into the substance of our meal, I should preface this review with some basic information about my food preferences. On a scale of “Vegan to Velociraptor” in terms of carnivorousness, I’m approximately “Tyrannosaurus Rex,” which is a step beyond Velociraptor (see how happy I am in the photo above? I’m like a kid in a candy store when I’m at a steakhouse!). So I’m off the chart as far as my enjoyment of meat goes. I actually view vegetables as unnecessary filler that gets in the way of meat. Except potatoes, but I’ve been told countless times those are not vegetables, so I guess they get a pass. Obviously there’s some hyperbole here, but my point is that if you’re a vegan or vegetarian, it’s likely that you and I will not share similar views of Yachtsman Steakhouse.

In short, Yachtsman Steakhouse brings the A-game for steak-lovers. The meal started out with a bread basket, the highlight of which is the delicious onion bread. That onion bread plus the roasted garlic and butter is a deadly combination (for anyone you talk to later in the night). It’s also a highly, highly delicious combination. Normally we don’t like to overdo it on bread, but when Ricardo asked if we’d like another basket of bread, the answer was an unequivocal “YES!” 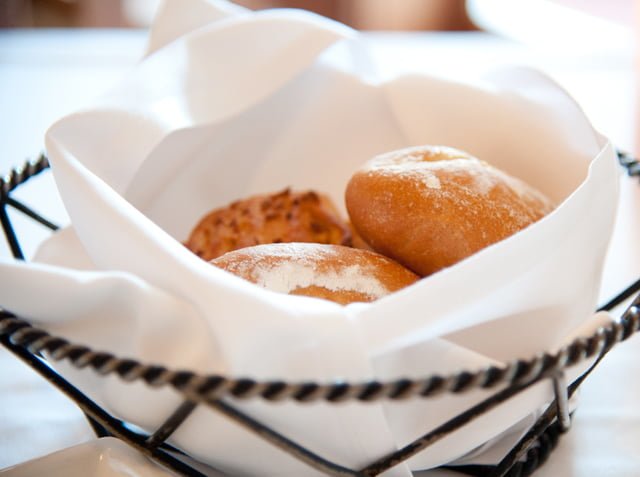 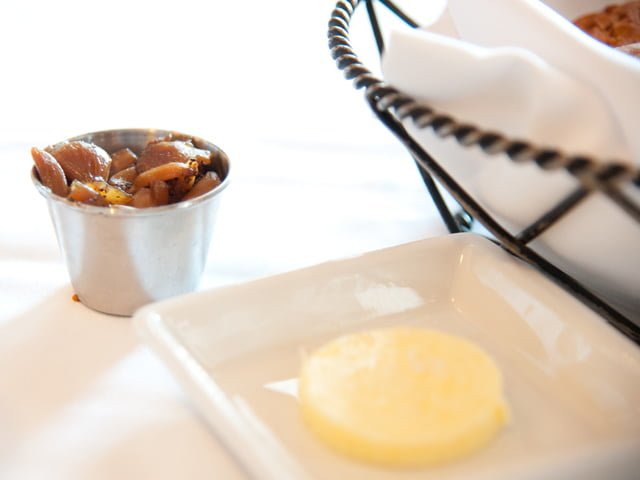 For appetizers, we both ordered the same fried crab appetizer, and it was incredible. Not only was the crab perfectly breaded and prepared, but the tomatoes and other garnishes were excellent! 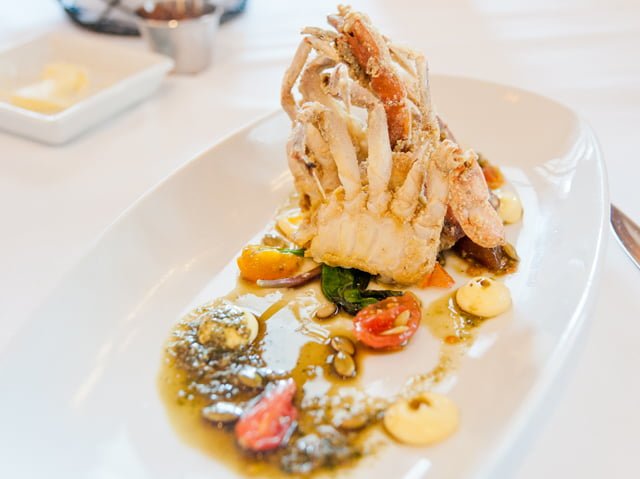 Now, on to the glorious entrees! Sarah had the Surf ‘n’ Turf (butter-poached Maine Lobster and Prime Strip Steak), and I had the 24 oz Porterhouse.

My Porterhouse was amazing. Flavorful, perfectly marbled, and with the perfect amount of seasoning. The roasted garlic butter added a great flavor to the steak, but it wasn’t doused in this butter so heavily that it masked the steak’s own natural flavor. Those who like incredibly lean cuts might not be as big of fans of this Porterhouse (or any Porterhouse, for that matter), but I like a bit of fat for flavor. If Yachtsman Steakhouse sold post cards, I would have bought one, because that steak was something to write home about!

At $46 it was pricey even by Disney standards, but it was 24 ounces and amazing. Given that, I don’t think it was out of line compared to other steak on property, especially for the size. It was certainly better than the $66 entree I had the day before at Narcoossee’s! I would not recommend visiting Yachtsman Steakhouse with an eye towards “dining on a dime,” but the Porterhouse was definitely large enough for two people to split if you want to go that route.

Usually I try to only post one or two photos of each entree we have in these reviews, but I’m having a tough time cutting anything here, so I’ll just present this glorious tribute to the Porterhouse: 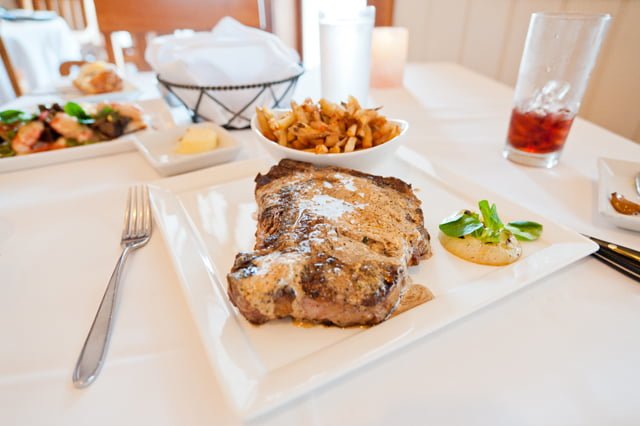 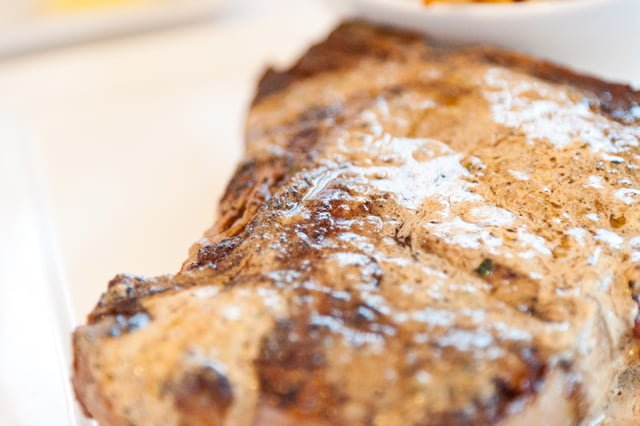 Check out our Disney Dining Index Page — Links to all of our restaurant reviews and other resources! 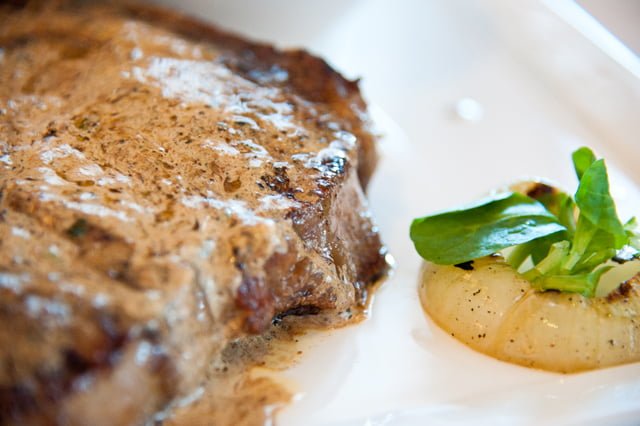 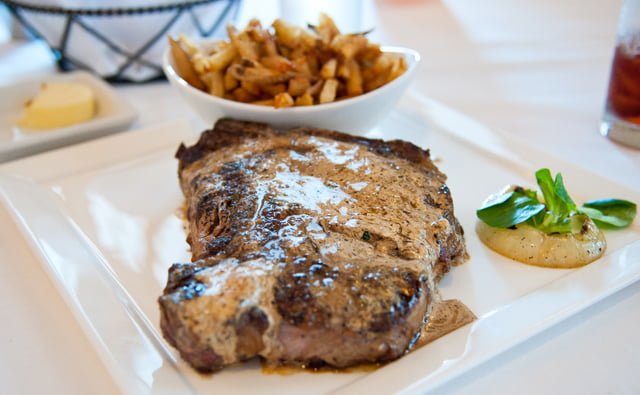 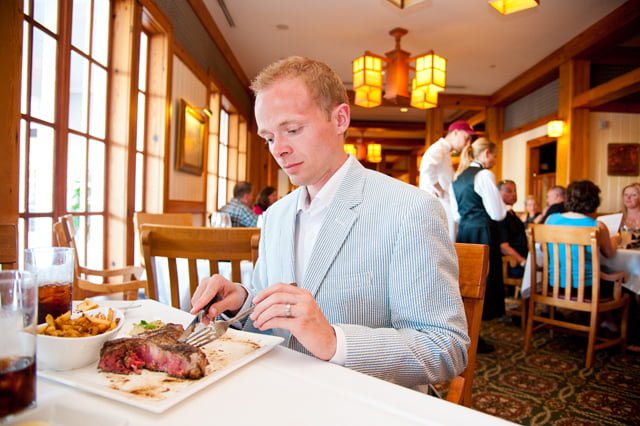 I may not look all that happy in this photo, but really, I’m just in the zone. Eating a steak this excellent requires dedication and concentration. No time for posed photos.

Truly the best overall steak I’ve had on Disney property. The filet mignon at Napa Rose comes close, and it’s difficult to compare two radically different cuts of meat, but I’m going to give the edge to Yachtsman Steakhouse.

As for Sarah’s meal, Sarah reported that her lobster was better than the lobster she had at Narcoossee’s. If you recall, she had a whole Maine Lobster at Narcoossee’s, so this is assessment is impressive since usually the lobster on a combo lobster/filet dish is inferior to the lobster on a dedicated “whole Maine lobster” dish. She described the lobster as tender, flavorful, and perfectly cooked, and similarly really liked the steak. I tried some of her strip steak, and while it didn’t compare to my Porterhouse, it was very excellent. Tender and juicy, especially for a strip steak. 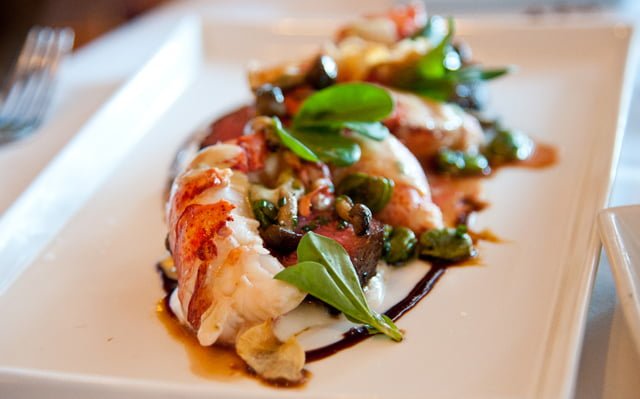 After dinner, Sarah ordered a cup of cappuccino. I’m not really sure which one, and I know almost nothing about coffee, so I can’t accurately assess it, but to my uninformed palate, it tasted delicious! 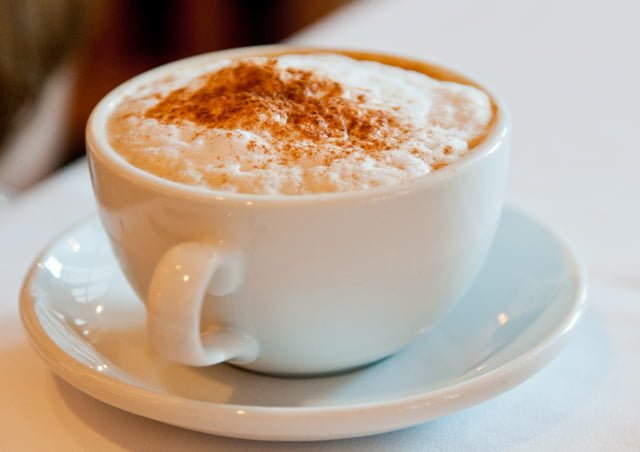 For dessert, I had the Peanut Butter and Pretzel Gianduja Cake, with salted caramel gelato and liquid ganache. This dessert was the bomb(dotcom)! Even though it was really rich, I didn’t mind at all, because I love peanut butter and it wasn’t too large (who am I kidding, it could have been 10 times this size and I would’ve eaten it all!). The mix of flavors and textures in the cake were excellent, and I had never had caramel gelato before this–it was also quite good. At $11, it was fairly expensive for a relatively small dessert, but it tasted excellent. I probably wouldn’t have paid that much for it out of pocket, but as a Disney Dining Plan dessert, it’s a great pick. 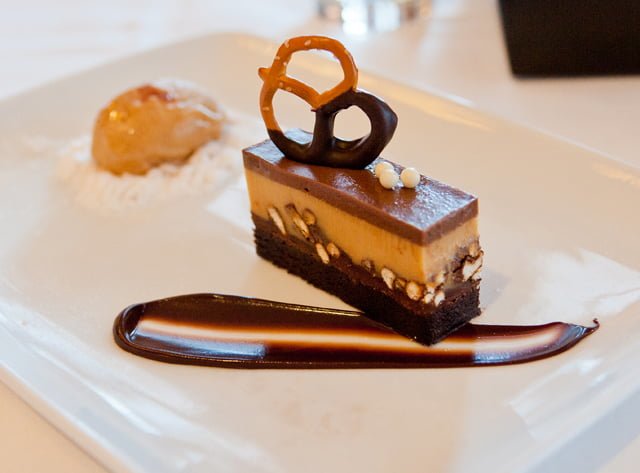 Sarah had the Lemon Pudding Cake, which she said was pretty good. She said it was incredibly moist, and that the blueberry shake that accompanied it was also excellent. I’m not quite sure about the war paint in the middle of her plate there, but I guess that’s how New England steakhouses present their desserts. Chowder-heads! 😉 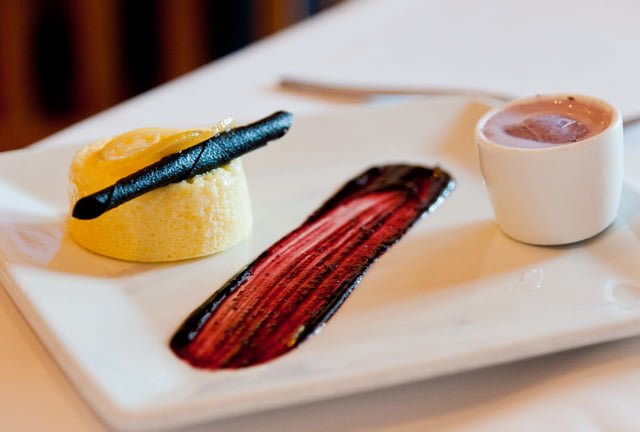 The next time we eat at Yachtsman Steakhouse, we definitely won’t use the Disney Dining Plan, and will skip appetizers and desserts in favor of the many steakhouse-style sides that can be ordered to accompany the steaks. We saw a few of these pass our table, and they looked excellent. Our appetizers and desserts were good, but they were expensive (especially the desserts), and I’d rather focus on steakhouse strengths when at a steakhouse. It’ll be difficult, but I’ll probably also order the Beef Wellington next time instead of the Porterhouse. The Porterhouse was absolutely amazing, but I suspect just about any cut of meat will be amazing at Yachtsman. We highly recommend Yachtsman Steakhouse to anyone who enjoys a good steak.

Are you a fan of Yachtsman Steakhouse? Share your thoughts, especially any experiences with their other (glorious?) cuts of meat, in the comments!