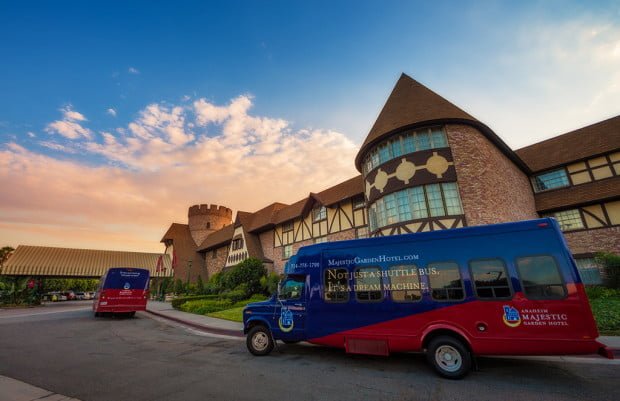 Anaheim Majestic Garden Hotel is located near Disneyland and Disney California Adventure. This review features photos of the hotel, plus thoughts about our experience of staying here. Disneyland locals may not recognize the name, but surely they recognize the hotel. We pass it every time we head to Mickey and Friends from the 5.

For those of you who aren’t locals, this is one of approximately 37 hotels (okay, more like 3) in the Disneyland area that has a medieval castle theme and motif. I suspect one hotel owner started this trend back in the day, playing off of Sleeping Beauty Castle, and a couple other entrepreneurs thought, “hey, that’s pretty clever…I ought to do the same!” I have yet to stay at Camelot Inn & Suites, but as I said in my Castle Inn & Suites Review, I think this style is fun for kids and works fairly well.

July 7, 2017 Update: We’ve heard from a reader (and confirmed independently) that Anaheim Majestic Garden Hotel now charges $25 for early check-in. Regardless of what we previously thought of the hotel, we now would not return here on principle, even if we didn’t need an early check-in. This guest-unfriendly practice should not be condoned, and consumers should vote with their wallets. Moving on with the rest of the original hotel review…

On the plus side, a $6 million overhaul to Anaheim Majestic Garden Hotel a few years ago gives it a fresh look. The medieval theme has been given a modern refresh and is restrained in the right places on the interior, so it doesn’t simply feel like the hotel version of the tired Medieval Times Dinner Show. Actually, the whole hotel has been given a modern refresh, which is now complete.

This overhaul has made the hotel appealing to us… 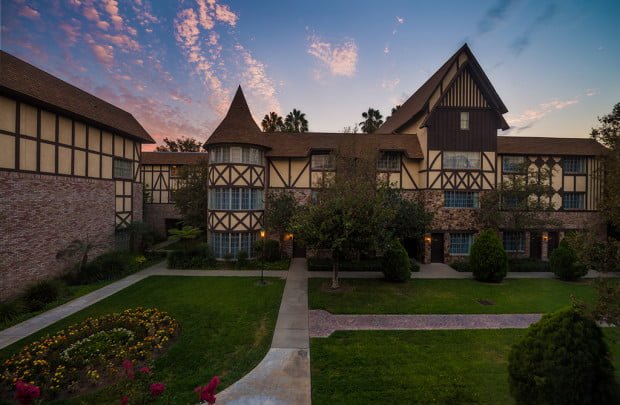 Before we get to why it’s so appealing, let’s cover the downsides that limit its appeal from our perspective. Actually, there’s really only one significant downside, and that’s location. It’s back by Mickey & Friends, which means it’s a bit of a hike to the parks. You could walk if you want (we always do from Mickey & Friends), but fortunately, there’s a free shuttle service offered by the hotel every 30 minutes.

We used this shuttle the first morning of Halloween Time at Disneyland, lining up for the first (7:30 am) shuttle at about 7:20 am. We were the last people to get on before the shuttle filled up (the driver informed the guests who couldn’t board that he would make another run in 10 minutes). I’m not sure whether this is the norm, but the hotel is quite large, so I could easily see those prime morning shuttles filling up, especially during the summer months.

From the hotel, the shuttle took only about 5 minutes to drop us off at the bus stop just outside the Esplanade. When it came for pick-up later in the day, the shuttle arrived on-time, and had us back to the hotel in about 5 minutes. This shuttle is a huge upside to staying at Anaheim Majestic Garden Hotel. I know folks love the shuttle that Candy Cane Inn offers, so I assume the reaction to this will be similar. Suffice to say, this shuttle is infinitely better than using the ART buses. 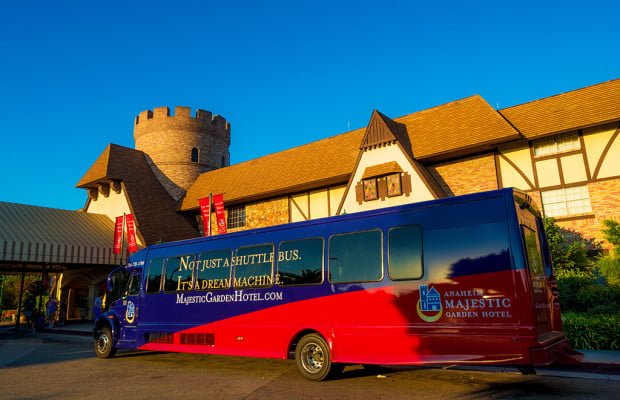 Personally, I still prefer being in control of my own destiny and being at a hotel that’s a short walk from the Esplanade, so I don’t have to worry about a bus being on time, filling up, etc., but your mileage may vary on that. If you prefer a shuttle to walking, then Anaheim Majestic Garden Hotel should have a lot of allure.

Then there’s the hotel itself. The millions of dollars the owners have dumped into the overhaul should be indicative of just how competitive the Anaheim hotel market has gotten in the last few years, and the results are pretty impressive. The easiest way to describe this hotel would probably be Castle Inn meets a major chain-brand Anaheim Convention Center hotel, with the best elements of each. 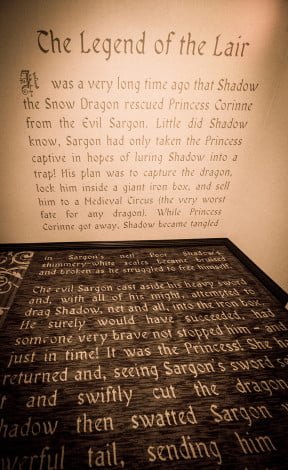 The castle elements are fun, and are well-balanced so as to not be off-putting to travelers without children. For those with children, the “Legend of the Lair” is told throughout the hotel on the carpet and walls. I’m told that, additionally, Princess Corrine will soon be doing meet & greets at the hotel and appearing at breakfast. I have no clue who Princess Corrine is, but I hope she’s a B.A. warrior princess of the Xena variety, and one who slays dragons on the reg. Girls could use more empowering role models, and what’s more empowering than defending California from dragons?!

Beyond that, there are bunk beds in some rooms that are fortress-shaped, and decor throughout the hotel evokes a restrained, medieval vibe. The hotel manages to feel fairly classy despite the fantastical decor, which is an accomplishment. 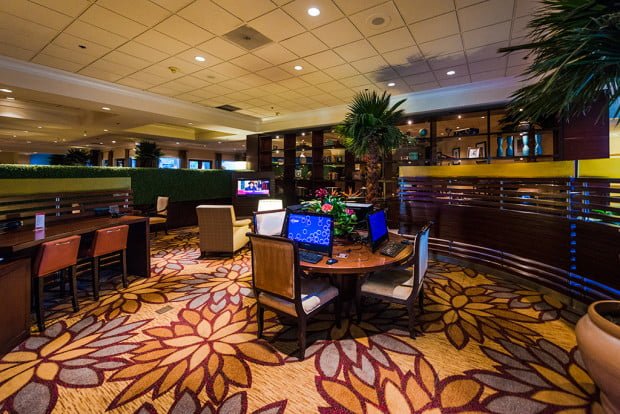 The rooms and amenity slate rival the Convention Center hotels in terms of quality (they’re not quite at that level–but close). Anaheim Majestic Garden Hotel has a fitness center, gift shop/grab ‘n’ go eatery, guest laundry, business center, and dry cleaning, among other things. 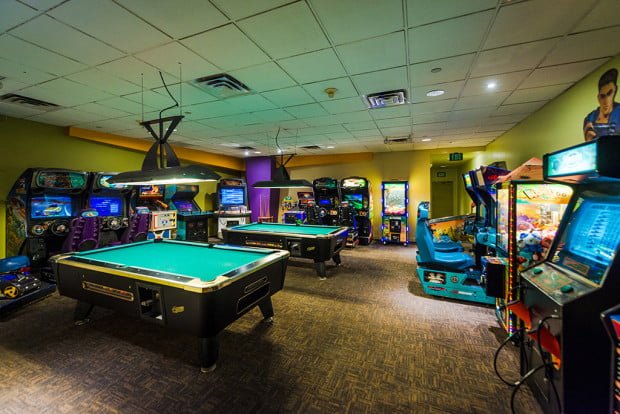 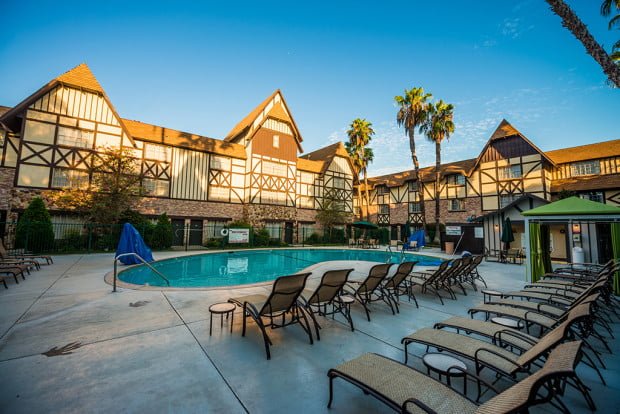 The pool, which is located in a center courtyard of the hotel, is actually reasonably nice. It’s still nothing you’re going to feature on your vacation slideshow, but it’s “not awful” which is good by Anaheim standards. 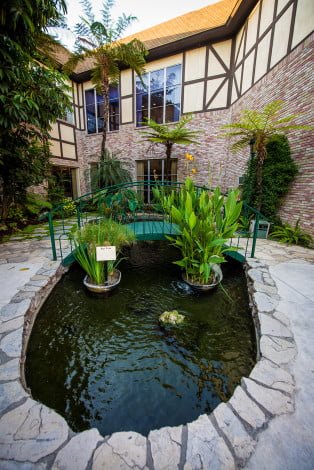 One of the courtyards also has a cute little area with a koi pond, although I didn’t spot any koi in it. Perhaps they were sleeping? 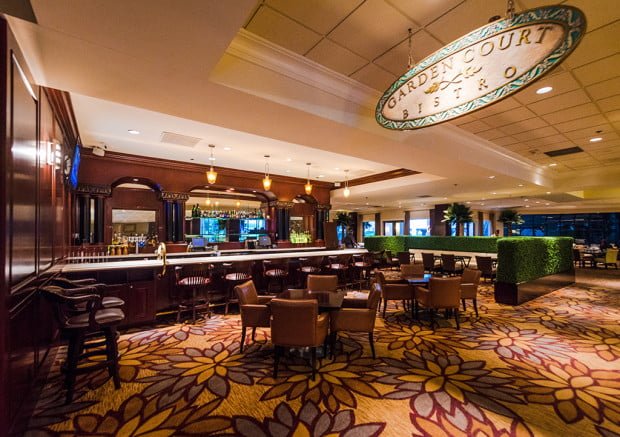 We dined at the on-site restaurant, and it was pretty solid, too. 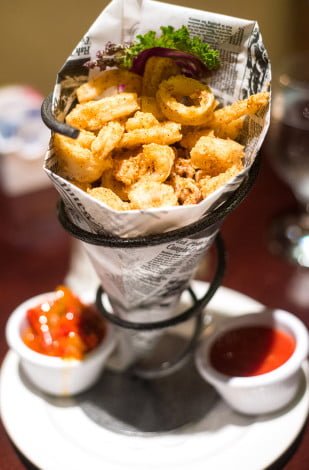 We started out with the calamari. I’ve never met a calamari dish I didn’t enjoy, and this was no exception. It was well above average. 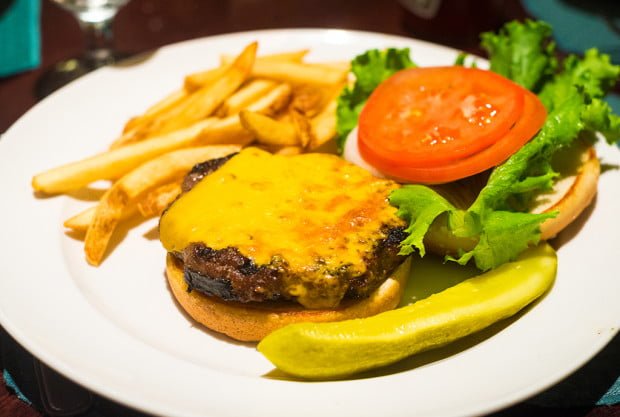 For my entree, I played it safe with the burger, and found it to be your average table service burger. 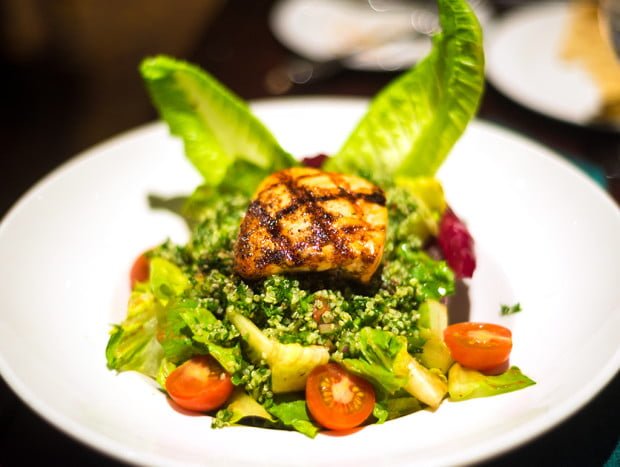 Sarah had the Grilled Salmon with Quinoa Taboulleh, and she raved about it. I would not try this ambitious of a dish at a moderate hotel restaurant for fear of being underwhelmed, but she was rewarded for her risk.

Judging by the menu options, service, and general vibe of the restaurant, the Anaheim Majestic Garden Hotel is aspiring for a high quality restaurant here. It’s not simply an afterthought to fulfill an amenity checklist box. 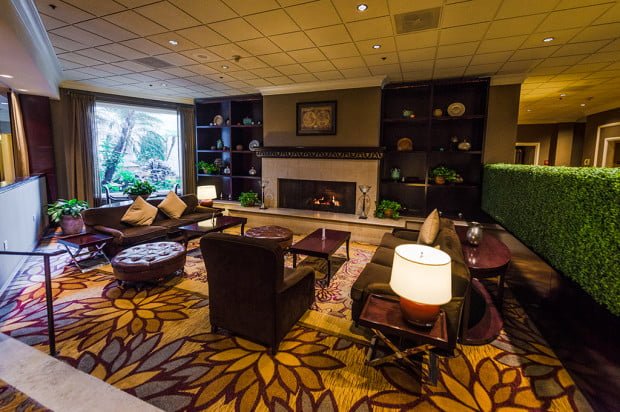 This ambition is evident throughout the hotel, where there are several upscale common areas for lounging and unwinding. Viewing the above few photos of these common areas in isolation from the rest of the review, you’d probably never guess this hotel also features hallways filled with medieval lore. In paper, it’s tough to reconcile the upscale with the medieval, but in person, it works. 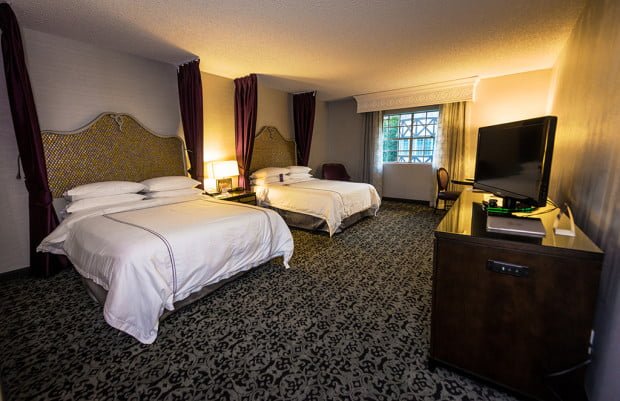 Likewise, the recently renovated guest rooms are quite nice and are among the most spacious standard rooms in the Disneyland area. The bedding was all quite obviously new, and the comforter and bedding was all very plush, while the down pillows moulded right to your head. 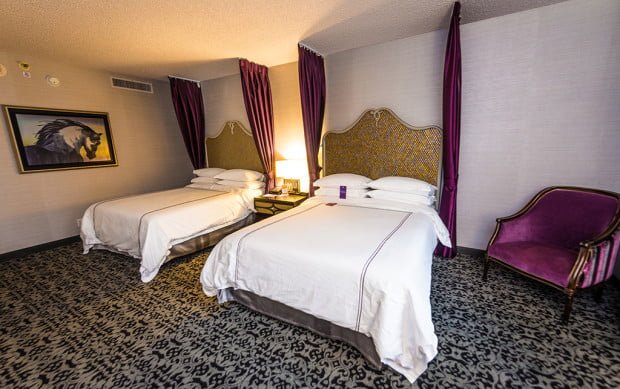 Of course, none of that matters if the walls aren’t adorned with some sweet horse art. I spent a good 95 minutes gazing at that majestic stallion. You can’t tell from the photo, but it has a metallic finish that makes you want to leap into the print and go for a wild ride. 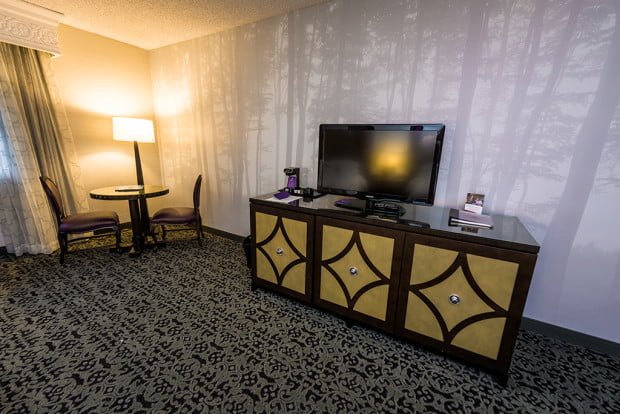 My snarky comments and this oddball horse print aside, the room was really well put together, and felt like nicely finished. The carpet was new and were textured, there was trim above the window, and the wallpaper subtly evoked the feeling of a forest. 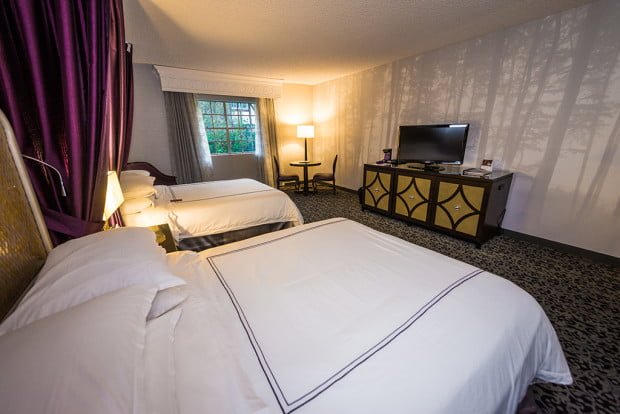 I wouldn’t out and out say the rooms were hip, but they were not bland, either. They felt modern, with plenty of high-quality accents. I’d rate them on the higher end of hotel rooms in Anaheim. Not quite rivaling the best at the Anaheim Convention Center or Hotel Indigo, but better than virtually everything along Harbor Boulevard. 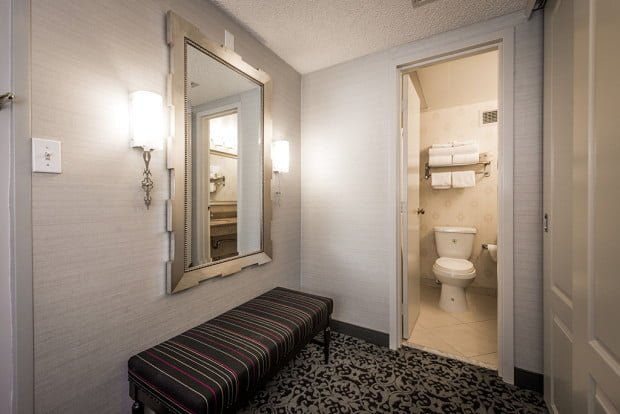 For as large as the entire room was, the one disappointment was how relatively small the bathroom was. It was pretty much the same size and quality as most other hotels in Anaheim, which I felt was underwhelming (and a poor allocation of space) given the quality and size of the rest of the room. 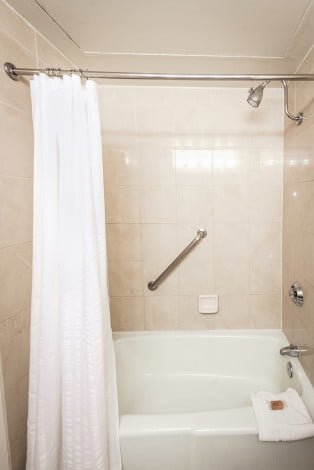 The shower was perfectly serviceable, but like so many hotels in Anaheim, nothing special.

In terms of price, Anaheim Majestic Garden Hotel is fairly competitive on some dates, but prices seem to vary widely. I found rates around $110-180/night, with weekends skewing higher, plus savings for Annual Passholders and on non-refundable promotional rates.

Keep in mind that parking is another $16 on top of that. As high-quality as the hotel is, my personal maximum would be around $130/night, but that’s in part because I’d prefer something within walking distance. If the shuttle and a well-appointed yet themed hotel interest you, I could see paying slightly more than that. (In the interest of full disclosure, our 1-night stay and dinner were both comped for the purpose of this review.) 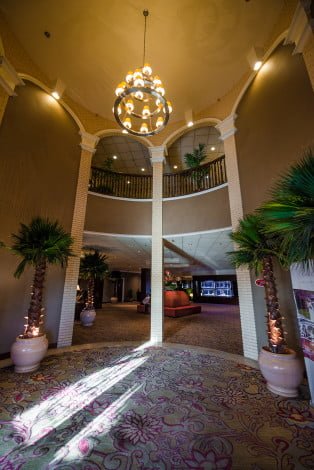 Overall, we were both impressed with Anaheim Majestic Garden Hotel. It delivers a host of amenities you’d expect from major business-tier chains, but not from an independent hotel in Anaheim. It’s clear that the owners have already dumped a lot of money into modernizing and improving the hotel. Likewise, the guest rooms are very well done, comfortable, and spacious.

This ultimately makes it a solid option if you’re looking for a hotel with whimsy that will appeal to your kids, but isn’t tacky or over the top in the execution of a theme. Anaheim Majestic Garden Hotel toes that line very well, which could be a big plus for many potential guests. The biggest downside from my perspective is the location, even with the efficient, free shuttle.

I’m a big advocate of being able to quickly walk from Disneyland to an off-site hotel, and that’s not something you can do here; if this hotel were on Harbor Boulevard, it would easily be one of the top 3 hotels near Disneyland. For anyone who doesn’t need that “feature,” Anaheim Majestic Garden Hotel should be on your short list of places to stay near Disneyland.

Distance is the only strike against Anaheim Majestic Garden Hotel, as evidenced by its ranking in our Disneyland Hotels Reviews & Rankings post. You can also read our overall comparison of the benefits of staying off-site versus on-site in our Where to Stay at Disneyland post. It’s one of the 39 Disneyland Good Neighbor Hotels, and one of only 7 in the highest “Deluxe/Superior” tier.

If you’re heading to Disneyland, we have tons of other posts to help you plan, including our Tips for Saving Money on Disneyland Tickets, a look at Disneyland Area Hotel Reviews & Rankings, our Unique Packing List for Disney Trips, an index of our Disneyland Resort Restaurant Reviews, and a number of other things in our comprehensive Disneyland Trip Planning Guide!

Have you stayed at Anaheim Majestic Garden Hotel (or any of its prior incarnations)? Are you a fan of it? Did you enjoy the amenities? find your room to be nicely appointed? Do you prefer staying off-site or on-site at Disneyland? Please share your thoughts or questions in the comments section below!