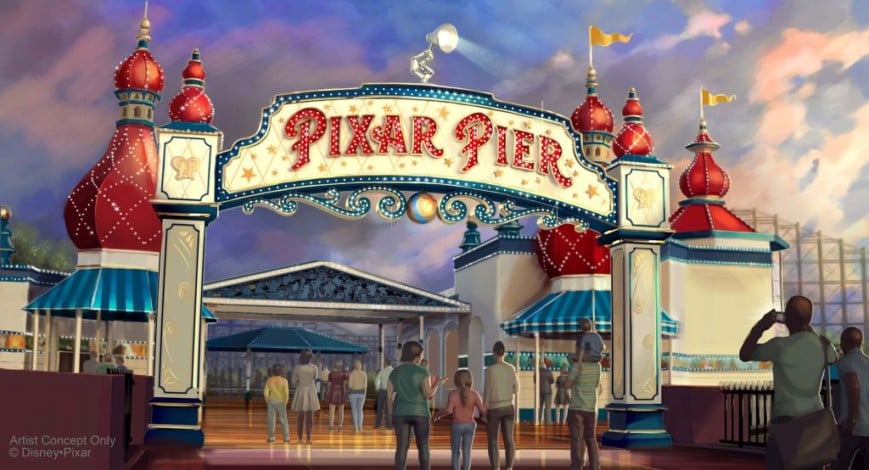 While the presentation was light on announcements (we were expecting something Marvelous), there was one semi-interesting announcement for Disneyland Paris, and…that’s about it. I guess some of the new concept art is interesting. It was mostly just repackaged details about things we already knew, with a morsel or two of new info scattered about, plus a lot of puffery.

After a litany of announcements at last year’s D23 Expo in Anaheim, some of which were pretty sparse on detail, it seemed likely that this presentation would fill in some gaps, and also offer follow-up announcements about projects that were discussed in vague terms, including expansion and redesign projects at both Epcot and Disney California Adventure. Neither occurred and, notably, neither did any word about Tokyo DisneySky, a park we are pretty convinced is not going to happen.

In this post, we’ll offer basic, press-release style info about what was announced (cutting out the fluff), and interjecting some of our opinions about each main topic that was covered during the Parks & Resorts panel. Let’s get started… 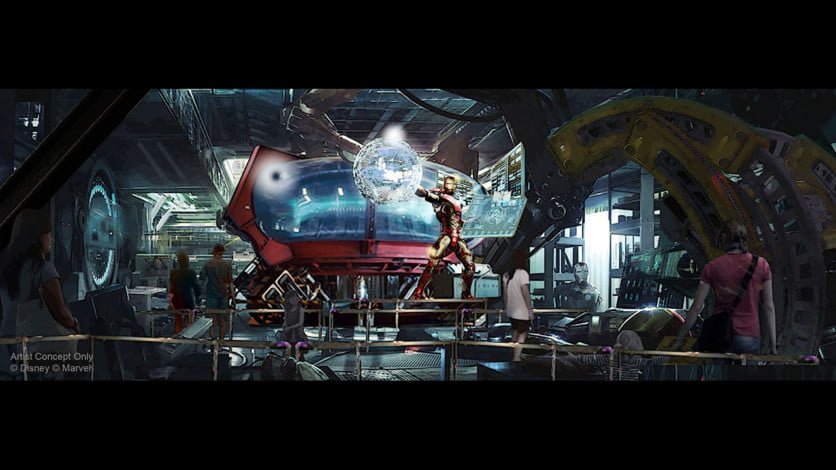 As we reported last March, Marvel is coming to Disneyland Paris. Vague details were included in the skeleton of a 10-year plan that called for over $2 billion of capex investment, with the main expenditures being Marvel attractions and entertainment in the Walt Disney Studios Park, plus overhauls to two of hotels.

At the time, it seemed like these additions would be staggered, with one slated for the near-term. The obvious choice seemed like Tower of Terror to Mission: Breakout for the quick overhaul. However, that’s not what’s happening, and in a twist that makes far more sense, Rock ‘n’ Roller Coaster will be totally reimagined as a high-speed, hyper-kinetic adventure where guests will team up with Iron Man and their favorite Avengers.

We’re totally on board with this. Rock ‘n’ Roller Coaster is located in a back corner of Walt Disney Studios Park in an ugly soundstage, with plenty of space around it for further, organic development of a fully-fledged Marvel Land. By contrast, the Hollywood Tower Hotel is positioned near the front of WDSP, and having it be the centerpiece of an eventual large-scale Marvel expansion really would’ve handcuffed Imagineering. While Rock ‘n’ Roller Coaster is a fun attraction, that’s all because of the coaster, not because it’s some thematic gem. It’ll be just as good–hopefully better–with the Marvel redo.

In the more immediate future, Marvel Summer of Super Heroes will debut at Walt Disney Studios Park and will run from June 10 until September 30, 2018. It will bring guests face-to-face with Captain America, Spider-Man, Star-Lord and Black Widow. We were under the impression that a stunt show would debut for this in the former CineMagique theater, but it doesn’t appear that has been announced (yet?).

Closer to home, StarLord is still planning a return to the theme park he visited as a kid in a totally on-theme experience (BECAUSE HE VISITED AS A KID, GET IT?!) in that one Guardians of the Galaxy attraction coming to Epcot for some reason.

The Guardians of the Galaxy ride in Epcot will be one of the world’s longest enclosed roller coasters, with an innovative new ride system. Per Disney: “the Guardians of the Galaxy-inspired coaster is part of our ongoing work to transform Epcot into a place that’s more family, more relevant, more timeless and more Disney. ‘As we build upon its core mission of optimism and hope to inspire the world, the real will become fantastic and the fantastic will become real–in whole new ways at Epcot,’ Bob Chapek, Chairman of Walt Disney Parks & Resorts, said.”

Last year at the D23 Expo, Bob Chapek announced that a Star Wars-inspired luxury resort will debut as part of the new Disney 360 vacation concept. This new vacation concept will be a living adventure that allows guests to be active participants in an entirely new form of Disney storytelling. To my knowledge, there hasn’t been a single new detail or much mention of this project since then.

Today, Chapek announced that every window at the Star Wars “Starship” Resort (our name for it, not his) would have a view into space, and the resort will be seamlessly connected to Star Wars: Galaxy’s Edge at Disney’s Hollywood Studios. Whether this is marketing-speak or in terms of the physical location is unclear.

We’ve separately heard that play-testing of this concept will begin soon at an existing Walt Disney World resort hotel in order to fine tune the concept before its details are finalized. Based upon what we’ve heard, the opening date for the Star Wars Starship Hotel is still several years away–after Star Wars: Galaxy’s Edge.

No new information was presented about Star Wars: Galaxy’s Edge. 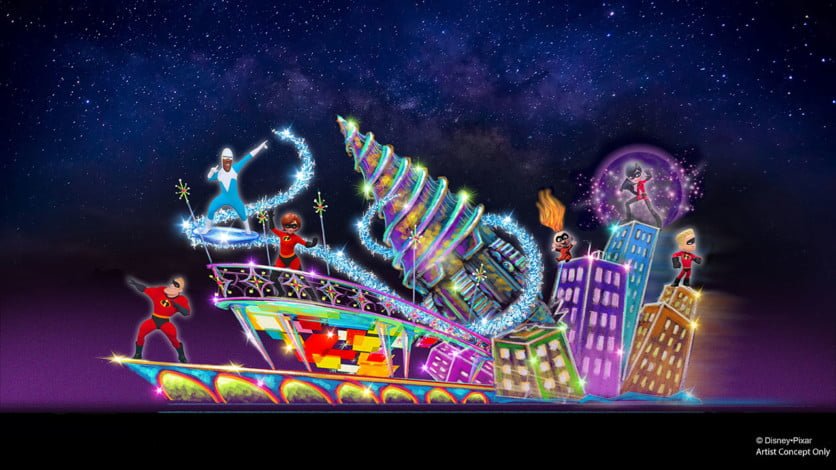 Chapek is dubbing 2018 as the “Year of Pixar” at Disney parks, due to the opening of Toy Story Land at Shanghai Disneyland in April and at Walt Disney World this summer, Pixar Pier debuting at Disney California Adventure on June 23, the Up bird show opening at Animal Kingdom on April 22, and Pixar Fest launching at Disneyland Resort on April 13.

“Honoring” Pixar with all of this is like that time Terminator: Genisys was released during the 25th Anniversary of the masterpiece that is Terminator 2: Judgment Day, but if Genisys were somehow even more of a trainwreck than it was.

Aside from the opening dates for Pixar Pier (yay?) and the bird show, the only detail of substance here was that the replacement float for the Frozen float being cut from Paint the Night is an Incredibles float, which will join the parade this June. Because 12+ months just wasn’t long enough to repurpose a single float to have ready in time for April! 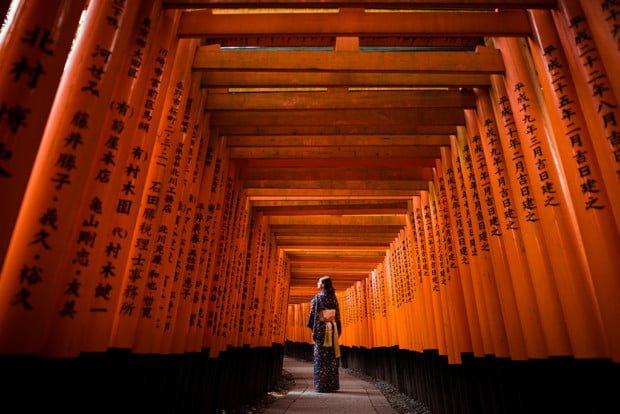 Chapek shared that starting next year, Adventures by Disney will take guests around Japan, including Tokyo and Kyoto (our favorite city in the world). As odd as it might sound odd, this is actually one of the most exciting tidbits for us! Japan is our favorite travel destination on earth, and if this enables more Disney fans to see it, that’s great. We hear from readers all the time who want to go but are apprehensive about cultural barriers. Well, here’s your solution! 🙂

Finally, previously-known details of the largest expansion to Tokyo Disney Resort since the opening of Tokyo DisneySea were covered. In our Beauty and the Beast Land Construction Update, we covered all of this, so we won’t rehash it here. Suffice to say, this gives Star Wars: Galaxy’s Edge a run for its money in terms of being the most highly-anticipated Disney project in the world right now.

That’s it. At least the Rock ‘n’ Roller Coaster bit was interesting…I hope?

What do you think of these “announcements”? Are you underwhelmed, or was this more than you expected? Any questions? We love hearing from readers, so please share any other thoughts or questions you have in the comments below!