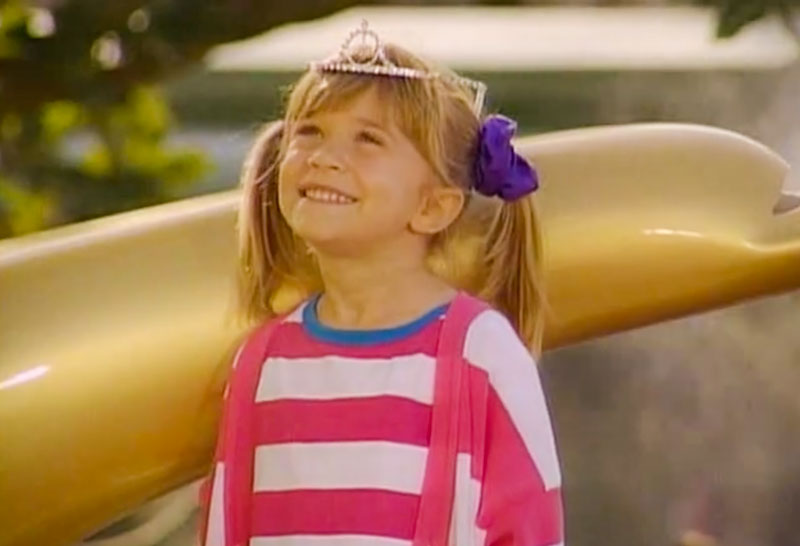 Synergy between ABC’s television shows and Walt Disney World is a tale as old as time. For over 25 years, sitcoms have done Disney theme park episodes that got kids hyped up and showed families everything new. This top 10 list will showcase the best of these WDW-ABC crossover episodes, and cover how they were perfect for an era before the internet.

Like most people of a certain age, I was a voracious consumer of ABC’s TGIF. Between that and NBC’s Must-See TV, my family gathered around the television every Thursday and Friday night. We were also big Walt Disney World fans, planning our annual pilgrimage months in advance with little info in between, aside from occasional features in “Disney Adventures” magazine, television commercials, and guidebooks.

Enter the special Walt Disney World episodes (plus a handful set at Disneyland in California). These ABC sitcoms were already the height of entertainment in my book, and adding Disney to them took that to the next level. So, when those episodes rolled around, it was time to fire up the VCR to make recordings that could meticulously be studied and analyzed for the months between vacations. (Two of these I’ve seen so many times that I can recite them from memory.)

If you’ve never watched any of these Disney episodes, first of all, I’m sorry. You were either deprived as a child or born in the wrong decade. Second, this is very much a nostalgia trip. In retrospect, ABC’s TGIF programming was not objectively good and almost none of it stands the test of time. Many of these shows were a product of their era, and if you didn’t live/watch through that era, these shows might be cringeworthy for you.

Personally, I loved and still love ABC’s TGIF shows. They’re comforting and nostalgia-inducing…much like Walt Disney World itself. Although I cannot support this assertion in any way whatsoever, I think all of these shows are pretty awesome and are still worth watching if you’ve never seen them. They’re a microcosm of a moment in time–both for television sitcoms and Walt Disney World… 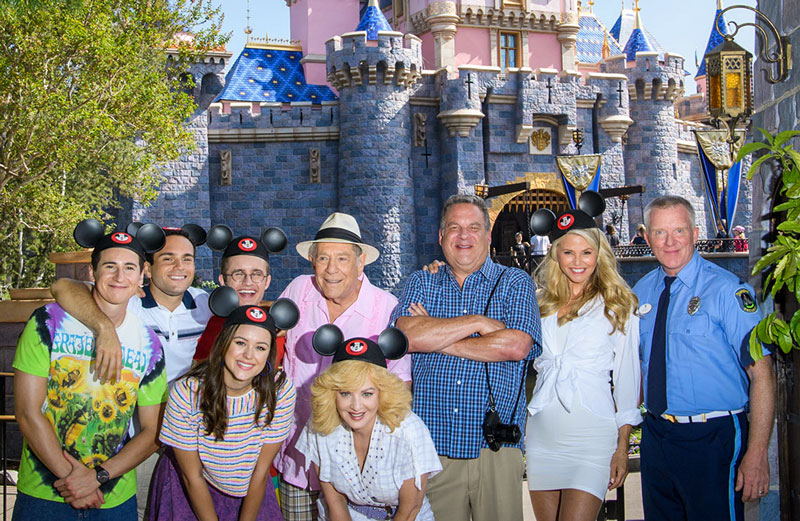 This was the one exception to that. In this episode of the Goldbergs, the family paid tribute to the iconic 1983 film National Lampoon’s Vacation. Beverly insists that the family take a road trip to go on vacation to Disneyland before Erica and Barry go off to college. As in the film, things don’t go as planned as they travel across the country to visit California. This episode scores points for actually being good, but loses many more for not actually being the Disneyland of the 1980s. (Streaming on Hulu; S07E01)

T10. Sabrina, the Teenage Witch – On a field trip to Walt Disney World, Sabrina visits Animal Kingdom while working to pass a test for her witch’s license and accidentally turns Libby and Valerie into zebras. Subplots revolve heavily around Dinoland and Kilimanjaro Safaris.

This was a thinly-veiled promotional push for Disney’s Animal Kingdom. The episode actually filmed before Animal Kingdom had opened to the public, and aired two days after the park’s grand opening. (Streaming on Hulu; S02E23)

9. Blossom – “The Best Laid Plans of Mice and Men” is the 19th episode of the 3rd season of Blossom, with the premise that Blossom’s dad gets a job at Disneyland as an Elvis impersonator, so the rest of the family decides to take a trip to see him. There are various scenes around the park, including Blossom catching Vinnie hugging another girl from the Skyway.

Ironically, I got “hooked” on Blossom as a kid thanks to another crossover episode–one featuring ALF as the guardian to the gateway to heaven. I’m not sure how that’s relevant here, but it’s a stronger memory for me of Blossom than the Disneyland episode, which really says more about my affinity for ALF than anything. Also, ALF rules. 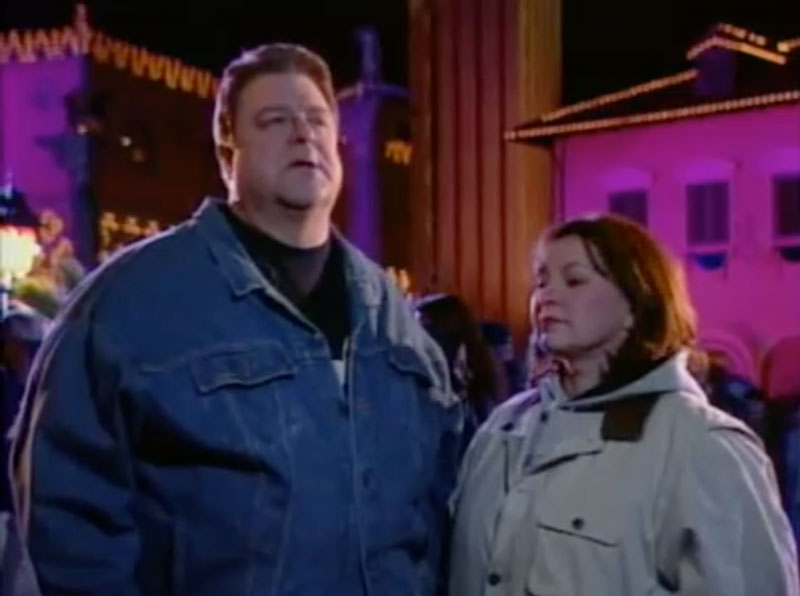 8. Roseanne – Dan brings home his final paycheck from the Lanford City Garage and rather than being responsible and putting the money towards bills, the Conner family goes all-out and splurges on a trip to Walt Disney World. There’s an amusing rope drop scene, Dan’s quest for beer at Epcot, and a fairly sweet ending involving Pooh and IllumiNations.

Roseanne is one of the “better” shows on this list, which is probably why it fell flatter for me as a kid. These episodes are more true to life than the pure fantasy scenarios of other Walt Disney World episodes, but that’s also why they’re less compelling from a Disney perspective. There’s also less footage from the parks (they even appear to be staying off-site, in a quasi-Contemporary Resort). Things pick up towards the end of the second installment, but I prefer the similar episode of the Middle. (Streaming on Amazon Prime Video; S08E17-18) 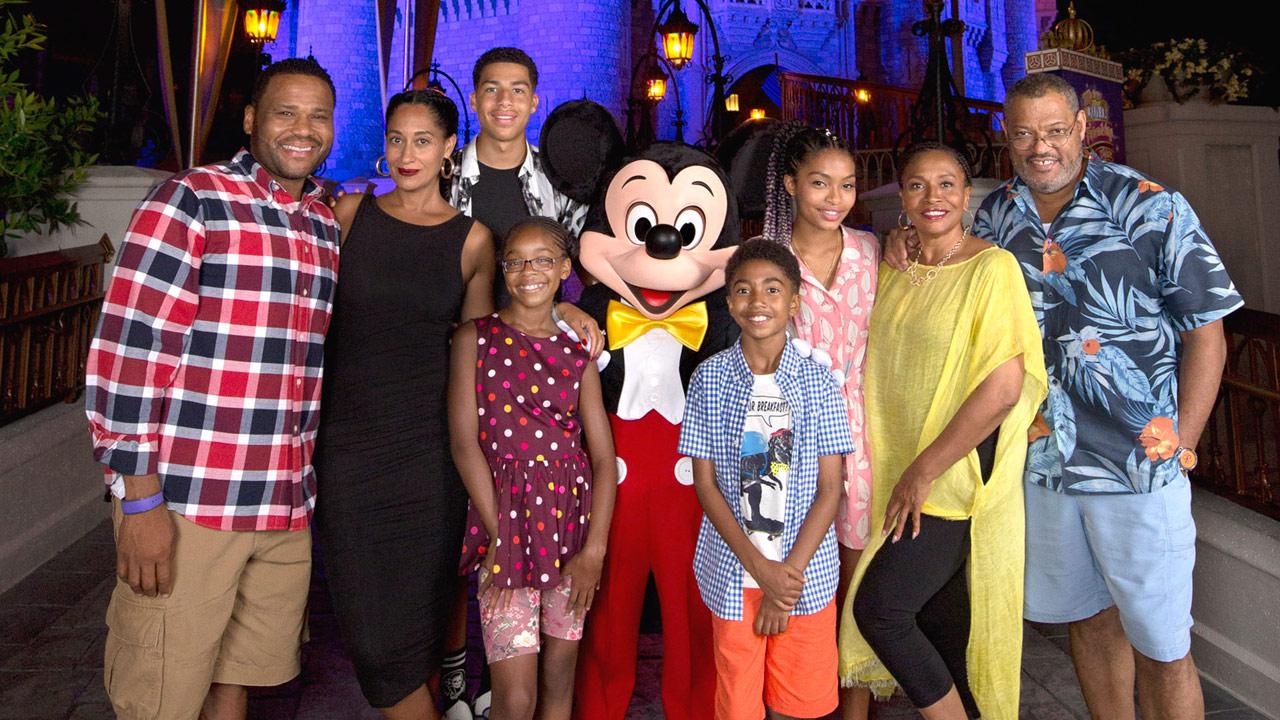 7. Black-ish – This season premiere episode of Black-ish is premised around Dre taking the family to Walt Disney World and having VIP treatment. The Johnsons get whisked around to all of Walt Disney World’s headliner attractions thanks to their VIP tour guide, which elicits mixed feelings. In typical Black-ish fashion, there’s some mild social commentary and lighthearted fun poked at Disney.

Black-ish is probably the most incongruous show on this list, as it is ABC’s closest thing to a prestige sitcom. It was also odd that the previous season ended with some heavy loose ends, and all of those are totally ignored in this one-off episode. It’s objectively better than other entries on this list, but not up to the show’s usual standards. Still, it’s a fun episode and has amusing situations for characters in a different setting. (Streaming on Hulu; S03E01) 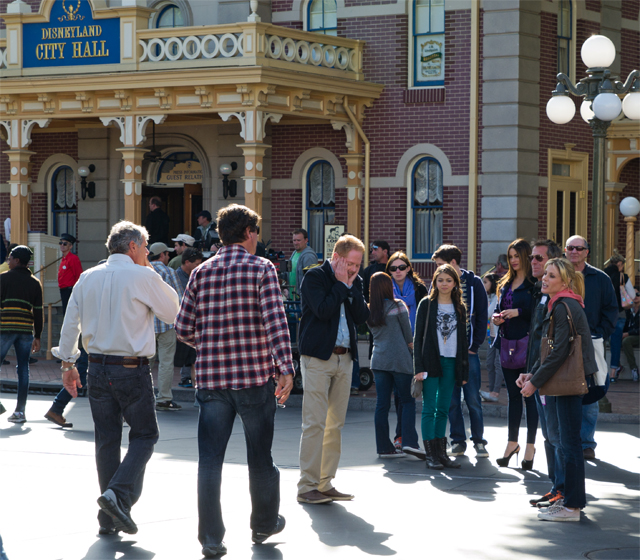 6. Modern Family – This one isn’t quite the grand premise at other vacation ‘event’ episodes, as the Dunphy family lives in Los Angeles and takes a day trip to Disneyland. The funniest scenes belong to Dylan, who joins the Dapper Dans and gets disguised as Little John. The episode culminates in a touching moment at Great Moments with Mr. Lincoln.

This episode actually filmed the day after one of the 24-hour parties at Disneyland (perfect timing as that day was really dead), and we watched the shooting of several scenes. I also have an embarrassing anecdote about Sarah geeking out upon seeing a couple of the actors during the party, but I don’t think she’d appreciate me sharing it. (S03E22) 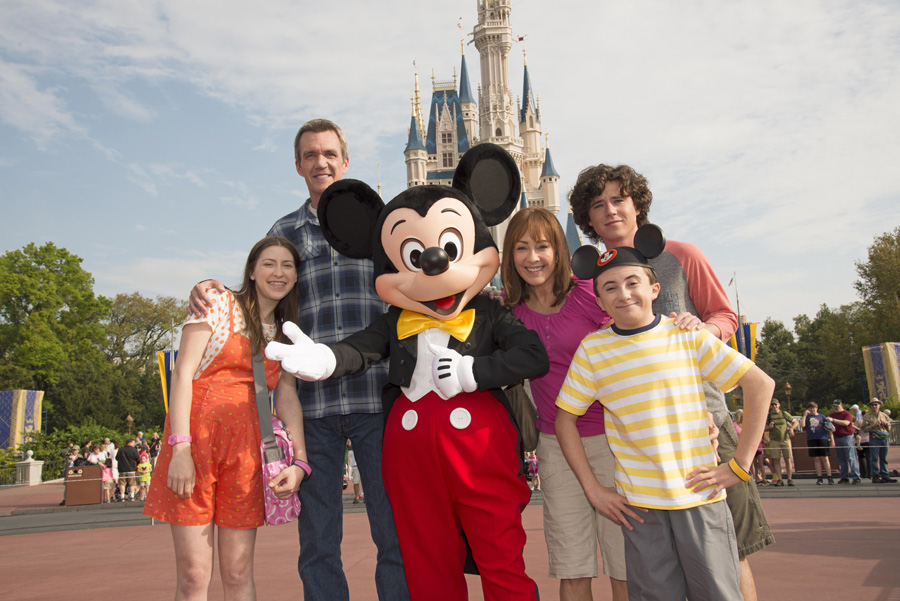 5. The Middle – In “Orlando/Wonderful World of the Hecks,” Sue wins the Disney trip in a contest, but they only find out it was a Disneyland trip upon arriving to Walt Disney World. In the family’s typical luck, the series of unfortunate events continues for the first three-quarters of the episodes’ run-time, with a disproportionate emphasis on MagicBands.

In those regards, these episodes of the Middle are a little less compelling as fodder for nostalgia or escapist fun. However, it sets the table for an emotional gut-punch at the end that I won’t spoil. I’ve always had a love-hate relationship with the Middle–it hits a bit close to home–but this alone causes the episode to rank very highly for me. (Streaming on IMDb TV via Amazon; S5E23-24)

4. Step by Step – The set-up for this two-parter is that Frank’s mother offers the couple and their kids a trip to Florida to celebrate their wedding anniversary. There’s simultaneously a lot going on in these episodes and absolutely nothing happening. Frank and Carol trying to spend time together for their anniversary and Flash trying to ride all the rides and visit all locations in the parks to break the record held by a Russian are the main “premises” of the episodes.

When viewed as a television show, these episodes are abominations. They’re complete nonsense, basically a flimsy pretense for a lot of Walt Disney World footage. And that’s where they shine! There’s a lot of unique stuff here, including what’s now Old Key West Resort (Disney Vacation Club would’ve been new at this point), plus Pleasure Island and other spots not normally seen in Disney episodes. (Streaming on Hulu; S05E22-23) 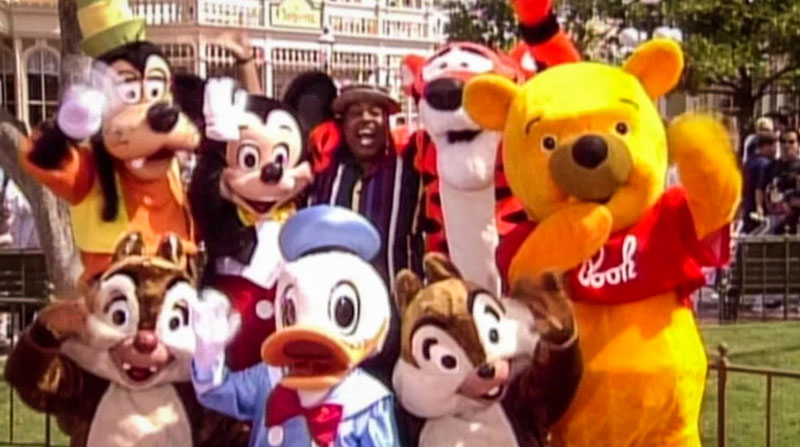 3. Family Matters – “We’re Going to Disney World” continues ABC’s time-honored 1990s tradition of nonsensical Disney episodes. These two episodes follow a familiar beat: one character inexplicably winning a trip, and the rest of cast tagging along for no particular reason at all.

The crazy twist that Family Matters adds is Urkel’s “Stefan Urquelle” alter ego coming out thanks to his transformation chamber, which is why Urkel won the trip in the first place. None of that is germane to why you should watch. Rather, it’s the footage of Wilderness Lodge, Innoventions, Dinosaur Gertie, Sci-Fi Dine-In Theater Restaurant, and other spots seldom seen in these Disney vacation episodes. 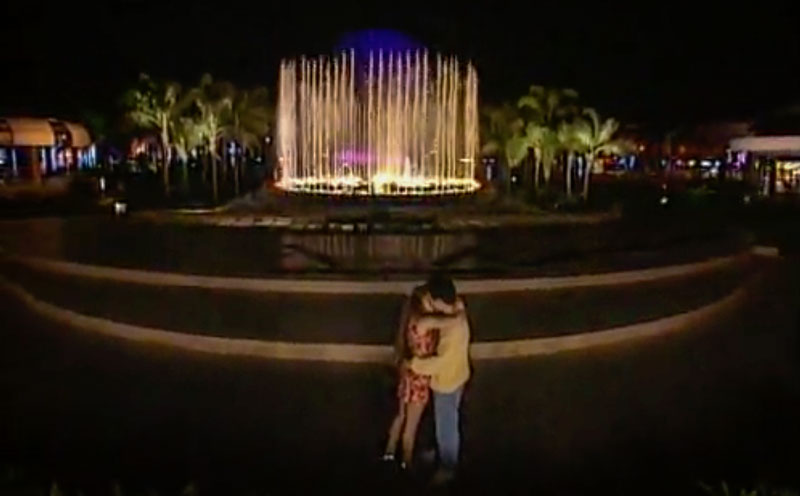 2. Boy Meets World – For me, the top two are in a league of their own. While I regularly watched most of the shows on this list, these are the two I absolutely loved as a kid. The premise here is that Cory is trying to win Topanga back–he and Shawn skip school to chase her after she wins a trip to Walt Disney World.

Once in Florida, Cory begins his relentless pursuit of Topanga throughout the parks, with an inordinate amount of time spent at the Living Seas pavilion in Epcot. Naturally, the couple ends up reuniting before the episode ends–that’s the magic of Walt Disney World! (I forgot the moment happens right behind the Fountain of Nations, which makes it even more bittersweet.) The episode also offers some comedic relief back at home, with Eric’s Cory dummy plan being a highlight. (Streaming on Disney+; S03E21) 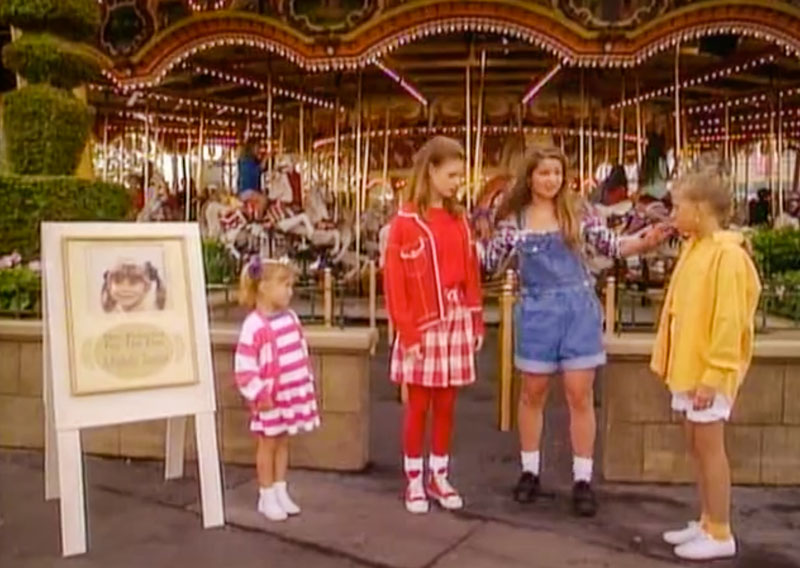 1. Full House – So many iconic moments. The most memorable of these is when Michelle is crowned Princess of the Day and discovers that absolute power corrupts absolutely. There’s also DJ seeing Steve everywhere (including as Aladdin!), a sweet scene in the Grand Floridian, a fun gag with Kimmy and Prince Charming, and more time in the Living Seas, for some reason.

It all culminates with Jesse and the Rippers performing “A Dream is a Wish Your Heart Makes”, as fireworks begin bursting behind Cinderella Castle while Danny proposes. It might sound sappy or cliche now, but at the time it was sappy in the best possible way. (I can only imagine how many trips were booked because of these episodes–probably more than all of Walt Disney World’s other 1993 marketing efforts combined.) Beyond that, “the House Meets The Mouse” Parts 1 and 2 originally aired at the end of Season 6, which is the peak of Full House in my view. (Streaming on Hulu; S06E23-24)

It’s probably no coincidence that most of my favorite Disney episodes aired between 1993 and 1996. The latter year is pretty much my “sweet spot” for the peak of Walt Disney World as a whole. My fondest childhood memories are from that era, as are my favorite attractions. Even though they’re not depicted, this would’ve been the window when many personal favorites were all running: the original Journey into Imagination, Alien Encounter, Universe of Energy, Toontown, Timekeeper, plus several EPCOT Center favorites.

What is your favorite Disney episode of an ABC sitcom…or do you love/hate them all? Do you agree or disagree with our rankings? Would your top 2 be the same? Any questions we can help you answer? Hearing your feedback–even when you disagree with us–is both interesting to us and helpful to other readers, so please share your thoughts below in the comments!