Disneyland Hotel is the original hotel at Disneyland Resort, and features a theme modeled after the park’s lands and Walt Disney, himself. In this review, we’ll share room photos, thoughts on the pros & cons of staying at Disneyland Hotel, and how it compares to the Grand Californian and other hotels in Anaheim.

Although Disneyland Hotel is not the flagship hotel at Disneyland Resort (that distinction belongs to the Grand Californian Hotel), it is one of only two hotels in Anaheim, California with a AAA four-diamond rating (the Grand Californian being the other). It’s essentially a modern, luxury hotel with Disney design touches, but without any escapist themed design. As mentioned, Disneyland Hotel is themed to “Disneyland,” with its three towers representing Fantasyland, Adventureland, and Frontierland.

I consider Disneyland Hotel to be a lot like “Remember… Dreams Come True!,” the perfect self-referential tribute that excels because of how its treatment of the legacy of Disneyland, but is pretty impressive in its own right. This is truly no easy task, and it’s so easy to go for cheap plays on emotion (liberal use of Walt Disney’s likeness, for instance) rather than creating a quality product that successfully merges great elements of the past with a quality contemporary product, but Disney nailed it when they re-designed the Disneyland Hotel. As it stands, the hotel is a great mix of modern design and retro details…

This is not something I would want to see out of every Disney hotel. I am a sucker for themed design, and I love how other Disney resort-hotels manage to transport guests to different times and places through the execution of the hotel. Disneyland Hotel is not themed, it’s decorated. If every Disney hotel were simply a luxury hotel with tributes to the past, it would get old quickly. However, this is the only one, and it executes perfectly on the concept.

Admittedly, I’m a big fan of the history of Disneyland. I’ve been fascinated by Disneyland Hotel since reading Donald Ballard‘s Disneyland Hotel: the Early Years and his follow-up Disneyland Hotel: 1954-1959 (warning: these books are for serious geeks, not casual fans). These books gave me a great appreciation for the hotel even before we ever stayed there.

Although much has changed at Disneyland Hotel since its early days, it still just feels like a special place thanks to its roots dating back to the Wrathers family and the opening years of Disneyland. Basically, this hotel has just as rich of a history as Disneyland, making it an “essential” place to experience for the diehard Disney fan.

However, it’s not just the hotel’s many nods to Disney history (I wonder how frequently they have to replace the awesome paper-goods in the room because guests take them?) that earn it high marks from us. The hotel is also flat out nice. 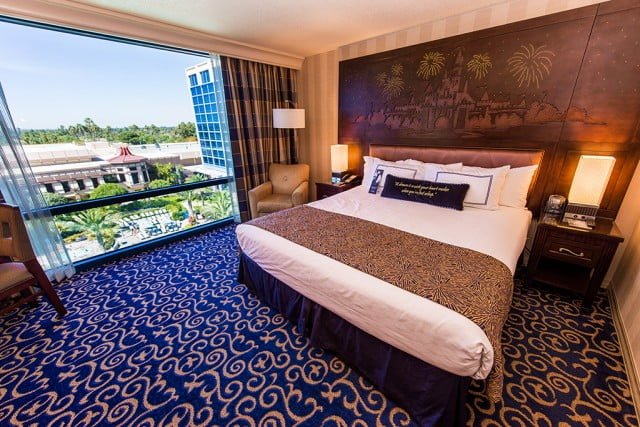 In terms of rooms, all of Disneyland Hotel rooms were recently refurbished, and they look great. From the pretty and thick carpet to the textured wallpaper to the bedding, the rooms at Disneyland Hotel scream quality. While we love themed hotels, it seems that one stumbling block to a nice Disney hotel room is execution of a theme.

Disneyland Hotel doesn’t have that obstacle and really hits on everything you’d expect from a nice hotel room. This isn’t to say the room is generic (far from it) as there are touches of Disney everywhere, with photos of Walt Disney and early-era Disneyland all over.

There’s also a strong Mickey Mouse motif throughout the rooms, with Mickey accents and details here and there.

The rooms in Disneyland Hotel are roughly the size of the Grand Californian’s rooms, I’d say. Not huge, but not bad by any means. One thing worth noting is that they do not have balconies.

We did not stay at Disneyland Hotel prior to its big refurbishment, but our understanding is that the rooms absorbed the balconies during the refurb. We definitely will take larger rooms over a balcony, although it would be nice if they have both. 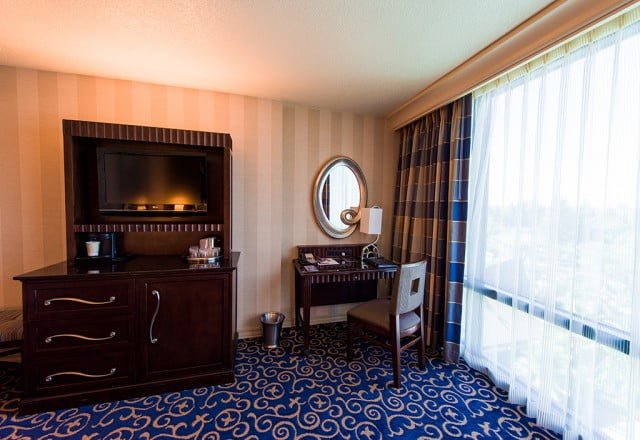 It seems like the defining feature of the rooms at the Disneyland Hotel is the “goodnight kiss” (not to be confused with the Kiss Goodnight at Walt Disney World) switch that lights up the fiber optics in the headboard and plays “When You Wish Upon a Star,” music box style.

Whoever thought up this feature is a genius, because it always seems to be the first thing mentioned when discussing Disneyland Hotel. If you have kids, they’ll love this. If you are an adult who is unduly impressed with things that light up and make sound, like me, you will want to leave this on all night. 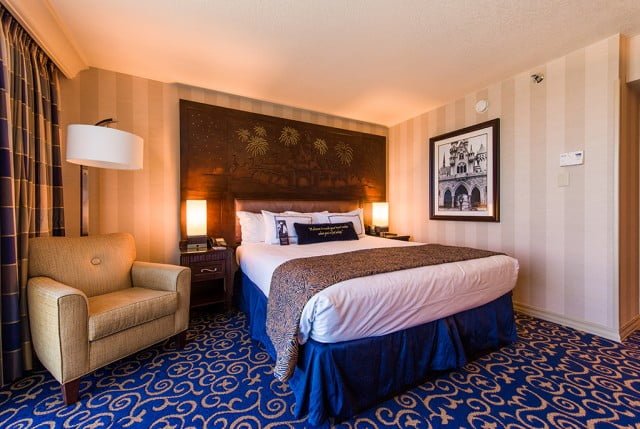 One final note on the rooms, and those are the “Signature Suites.” These include the Mickey Mouse Penthouse, Big Thunder Suite, Pirates of the Caribbean Suite, Adventureland Suite, and others. Granted, every hotel has suites, but these look flat out awesome.

We have never stayed in any of these, so we can’t recommend them, but if money is no issue, you definitely ought to look into them. (And if by chance we have readers to whom ‘money is no issue’ who need one of these suites tested before their trip, we will gladly accept the assignment should you wish to sponsor the research! ;)) 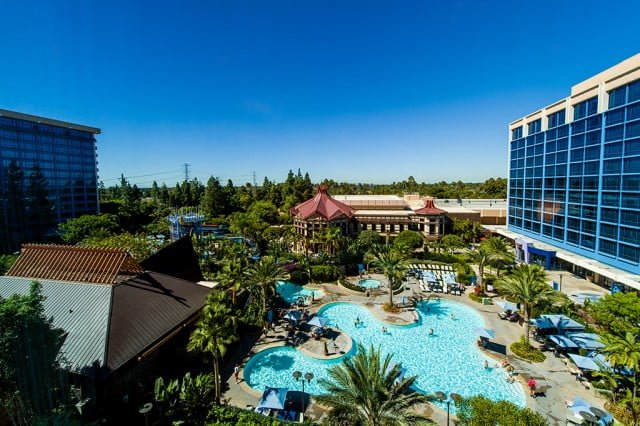 Disneyland Hotel has a variety of amenities, services, and stuff, all of which you can read about for yourself on Disneyland’s website.

Instead, we’ll focus on the two other big amenities at the hotel, which I believe are the pools and dining.

In terms of pools, Disneyland Hotel has the E-Ticket pool and D-Ticket pool, in the middle of the hotel’s inner courtyard, both of which are nice. We particularly like the look of the the monorail waterslides, as well as the overall size and layout of these pools.

There are also cabanas you can rent. As compared to the Grand Californian, we give the decisive edge in terms of pools to Disneyland Hotel. 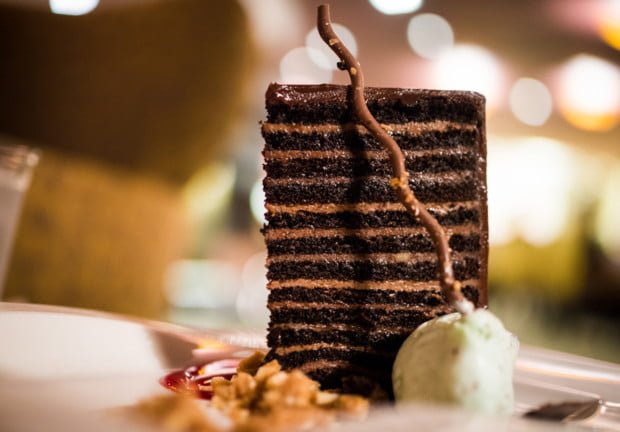 Trader Sam’s is the best bar (it’s really so much more than a bar) at Disneyland Resort and the Steakhouse 55 Lounge is not too shabby, either (we highly recommend the 24-layer cake). Tangaroa Terrace is an excellent counter service option, which we really enjoy (it has a great, under-the-radar breakfast menu, too). Goofy’s Kitchen is an incredibly popular character meal…but the food is only so-so there. 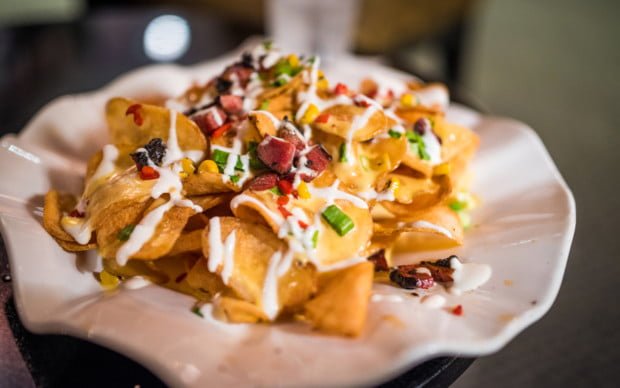 In our estimation, the US hotel that gives Disneyland Hotel the closest competition is Disney’s Grand Californian Hotel & Spa. Its lobby is absolutely gorgeous, as are its details and finishing. Its location–with a private entrance into Disney California Adventure–also cannot be beat. 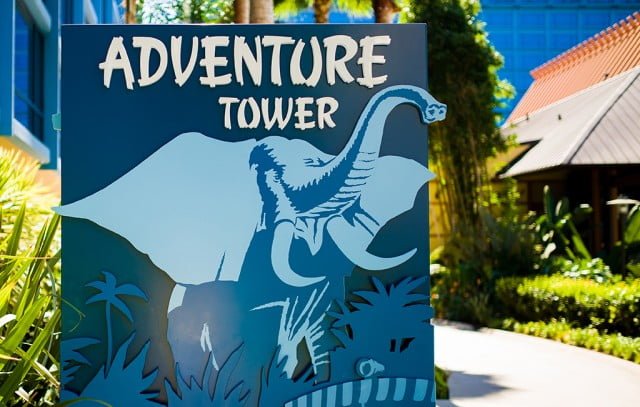 Disneyland Hotel is often cheaper than Grand Californian, which means it gets the nod for us on those occasions. Exact rates vary based upon season and discounts, but you can typically expect to pay at least $100/night more for the Grand Californian. Paradise Pier Hotel seems to generally be about $75/night cheaper than Disneyland Hotel, although we’ve seen Paradise Pier effectively more expensive on several occasions due to no availability in its lower room categories. (We are not fans of Paradise Pier Hotel and would not stay there again.)

Regardless of the discount, Disneyland Hotel is still pricey. Whether it’s worth the cost is entirely a matter of preference and budget, but we consider it an easier pill to swallow than the Grand Californian. Still, it’s at least double the price of off-site hotels located about the same distance away (and triple or more the price of off-site hotels located farther away). We’ve previously debated the merits of staying on-site versus staying off-site at Disneyland Resort, so I won’t rehash those here, but essentially, you pay a significant premium for being “on property.” Disneyland Resort doesn’t have nearly as many on-site hotel rooms as Walt Disney World, and this likely contributes to the rates. 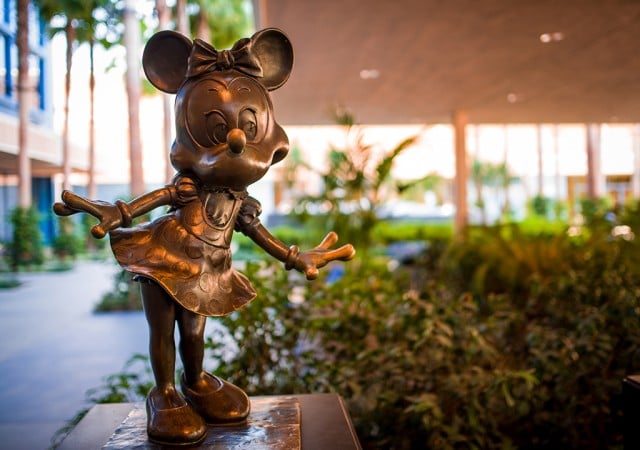 Overall, we both highly recommend Disneyland Hotel. It’s especially great for fans of Disneyland history, or those looking for a luxury hotel experience without the pretense of immersive theming. Those who prefer themed environments will likely prefer the Grand Californian, which definitely has many elements that are more impressive. The big question with regard to Disneyland Hotel is whether it’s worth the high nightly rates, especially with off-site hotels that are very conveniently located by comparison.

What do you think of Disneyland Hotel? Do you like the details and decor of the Disneyland Hotel, or do you feel that it lacks something that the other immersive, themed hotels have? Hearing from you is half the fun, so please share your thoughts in the comments!