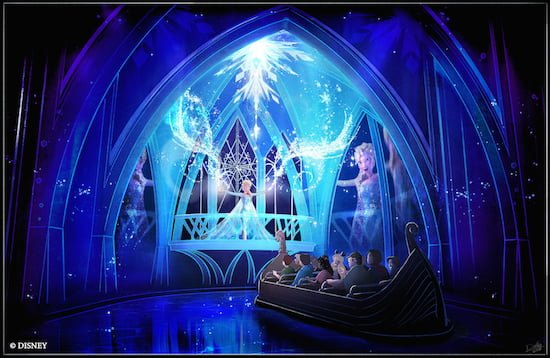 ‘Frozen Ever After’ is an attraction opening in June 2016 at Epcot in Walt Disney World. Disney officially announced that Maelstrom in Norway at the World Showcase will be replaced by a Frozen attraction.

Disney has set an official date for the attraction to open, and it is June 21, 2016. (Additionally, it’s rumored to be soft-opening by June 17, 2016–the same day as Soarin’ Around the World.) Once Frozen Ever After officially opens, expect the Norway pavilion to open at the same time as Future World. The adjacent Royal Sommerhus, Anna and Elsa’s new meet & greet location, will also open on June 21, 2016.

Starting June 21, the Norway Pavilion will open at 9 a.m., along with the Future World area of Epcot. FastPass+ for Frozen Ever After will be available for booking starting May 21, and you will want to be up early ready to book if you’re traveling this summer, as these will be the hot FastPass+ to score.

The attraction will likely be a Tier A FastPass+ attraction, giving Epcot 3 highly coveted top selections in Test Track, Frozen Ever After, and Soarin’ Around the World. Given its lower capacity as compared to Soarin’ and Test Track, we’d recommend using FastPass+ on it. Alternatively, making a pre-opening ADR for Akershus would and rope dropping Frozen Ever After would be a good alternative. We’ll update our 1-Day Epcot Ideal Day Plan to reflect this. Expect Frozen Ever After wait times to exceed 120 minutes for much of the summer, so yeah…you’ll definitely want a plan.

Want some more info about the new attraction? The new ‘Frozen’ attraction will take our guests to Arendelle and immerse them in many of their favorite moments and music from the film. The pavilion will also include a royal greeting location where Anna and Elsa can meet our guests.

To date, few details have been released, but the Wall Street Journal offered a sneak peak at the attraction, and it should be noted that the italicized text below could constitute spoilers, as it is basically a scene-by-scene description of the ride through:

“Once [guests] board their logs, ‘Frozen Ever After” riders will first see goofy snowman Olaf and equally goofy reindeer Sven setting up the Winter Festival premise.

Next is a stop at Troll Valley, where Grandpappy Troll tells a gathering of children the story of how Anna and Kristof met, before the log goes up a ramp to find Olaf again, singing a song while ice skating, right next to Anna and Kristof, who are singing with their friend Sven.

Behind a set of doors is the moment any visitor is sure to be waiting for: Elsa, on a balcony, singing “Let It Go” in her ice castle. It’s the centerpiece of the ride…and it features elaborate effects to create simulated snow crystals soaring around the room.

Visitors will next ride by Marshmallow, the giant, formerly evil snowman from “Frozen” and his miniature Snowgie pals…

Marshmallow himself yells “Let It Go” in time with Elsa’s song before the log travels through a mist cloud and reaches the final scene, which includes fireworks and a wave from Elsa, Anna, Olaf, Sven and Kristof.”

Imagineering creative executive Kathy Mangum, who oversees the Walt Disney World Resort, informed the Wall Street Journal that Maelstrom had been gutted, with only the original water flume track remaining, and the attraction otherwise being re-made from scratch.

With that, here’s our original post written prior to the announcement of ‘Frozen Ever After’ that predicted a Frozen attraction coming to Norway, and what we’d like to see happen if one came…

There was a time when Disney characters in World Showcase seemed less likely than pigs flying or…uh…certain ‘things’ freezing over. Well, it seems Epcot’s Norway is about to be Frozen over. Maelstrom closed in 2014 to make way for a Frozen attraction, which would essentially be a quick conversion of Maelstrom into a Frozen attraction, rather than an entirely new attraction in its place.

These plans have already proven quite divisive among Disney fans. The consensus among EPCOT Center fans is that Maelstrom should not be replaced by anything-Frozen, which is not set in Norway and is disrespectful to World Showcase. Fans of the addition are generally excited about anything coming to World Showcase, which has had plenty of restaurants and shops added over the years, but hasn’t seen a new attraction since Maelstrom in 1988.

I’m a big fan of movies, and one thing that really fascinates may is how the critical consensus of a film can radically differ from the audience consensus. In terms of Disney attractions, I think the same often happens in terms of the fan consensus versus the average guest consensus. Many Disney fans have expressed frustration regarding the Frozen Ever After announcement in the last couple of years, but my guess would be that the general public largely won’t notice or won’t mind Frozen in Norway at Epcot.

The biggest objection I see from many Disney fans with regard to Frozen in EPCOT Center is that Frozen isn’t set in Norway, and as such, isn’t a perfect fit. Having witnessed the trajectory of Epcot over the past dozen-plus years, I don’t think ‘perfect fit’ is really a realistic measuring-stick anymore. Nowadays, we aren’t learning about the depths of the oceans in Future World, we’re joining a surfer-dude turtle as he looks for a fish.

We aren’t exploring the future of energy…we’re presented a decade-plus old, biased view of it. There’s scarcely a single pavilion in Future World that does justice to its topic. Beyond Future World, World Showcase has also seen the introduction of characters, and those characters certainly do not accurately represent their host countries. Frozen may be set in a fictional location, but for better or worse, it’s about as accurate to Norway as Beauty and the Beast is to France or Mulan is to China. 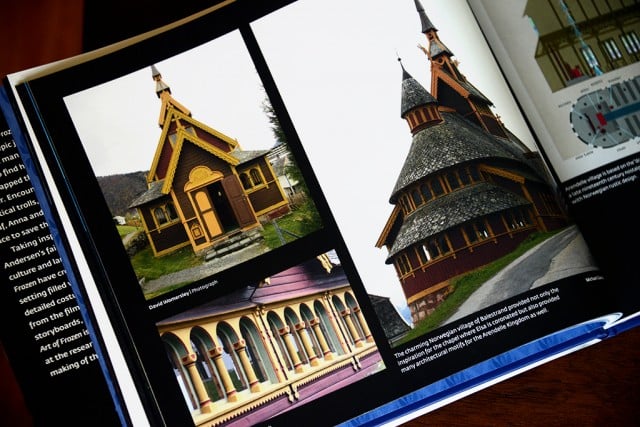 Moreover, Maelstrom itself isn’t exactly the most representative or compelling showcase of Norwegian culture. I’d hazard a guess that Frozen has done far more for Norway’s tourism industry than Maelstrom ever has, plus Norway has definitely embraced Frozen. There’s plenty in Frozen that is an accurate portrayal of Norway.

Check out The Art of Frozen, which features photos from the film team’s research trip to Norway and shows some striking similarities to background art and designs from the film if you want further proof of this. It discusses how the art team for the movie pulled from the Norwegian village of Balestrand in terms of architecture and design, utilized the Norwegian patterning style of rosemaling to give texture to costuming, and the parallels to Norway’s untamed wilderness. Frozen may not be technically set in Norway, but it’s certainly “inspired by” Norway.

I am not saying this to try to justify it as being close enough–there is no changing the fact that Frozen is not set in Norway–it’s set in a fictional country. I think it was a mistake for EPCOT Center to deviate from its original mission, but that new course was set in the mid-1990s. It’d be crazy to pretend this is the first instance of Epcot going off-theme. Rather, it’s a sad trend that has been ongoing for two decades. I just hope we get a high-quality attraction out of this that makes some effort at fitting into World Showcase.

Rather than going for the low-hanging fruit and doing a CliffNotes version of the film, it would be great to see a tour of Norwegian culture and heritage, hosted by the characters from Frozen. Many Disney fans would still grumble over the presence of characters in World Showcase, but I think just as many would be satisfied if the attraction makes an earnest effort to showcase authentic culture, and does so in a way that will captivate kids. Take guests through fjords and encounter polar bears, musk ox, mosses, and trolls based on Norwegian folklore, explaining the significance of each. Bonus points here for not phoning it in with the ‘condense a movie into 5 minutes’ ploy.

I have very little faith that Disney will actually make the attraction respectful to actual Norwegian culture, but I think doing so would do a lot to blunt a lot of the outcry over the prospect of a Frozen attraction, which is actually set in a fictional country (and there are no two ways about that, regardless of how much of Frozen is ‘inspired by’ Norway), moving into World Showcase.

Just because the precedent is there and Frozen isn’t as awful of a fit as some are arguing doesn’t mean it’s a good fit. Although EPCOT Center broke from its mission statement in the mid-1990s, I’m still one of the crazy few who hopes for a return to form. Epcot isn’t beyond the point of no return. Part of me thinks that with a couple of changes here and there, Epcot could again be the park that captured the minds and imaginations of countless guests and really redefined what a theme park could do, with lofty ambitions for a park that fused education with entertainment.

Maelstrom did not age well and was overdue for a replacement, but Frozen in its place is another nail in the coffin of EPCOT Center for those of us who remember that ambitious, concept park.

What do you think of adding Frozen to Norway in World Showcase? Which additions would you like to see instead of this? Any other placemaking ideas for Epcot? If you have any other tips or ‘Armchair Imagineering,’ please share in the comments!

89 Responses to “‘Frozen Ever After’ in Epcot News & Rumors”