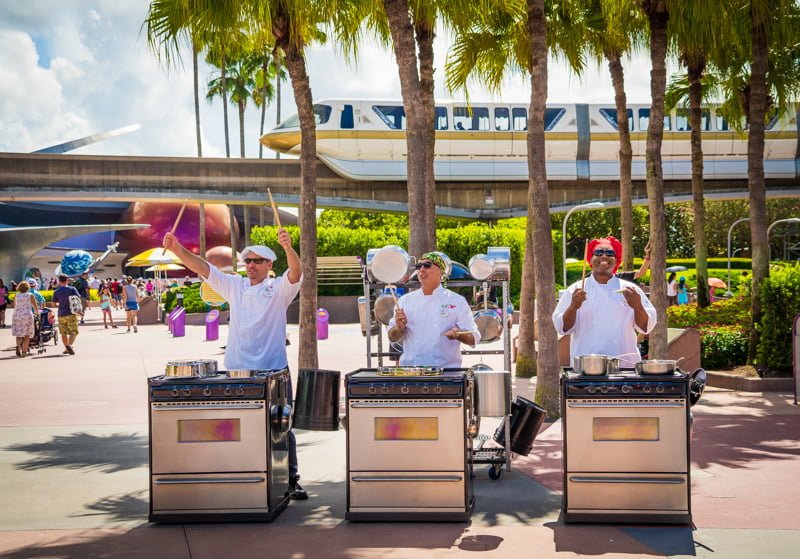 Epcot is the final stop of our September 2018 Walt Disney World construction reports. Our last update from here was only a few weeks ago, but with the Food & Wine Festival now underway, plus more construction progress on the Guardians of the Galaxy and Ratatouille attractions, and Skyliner gondola transportation we’re making a return visit.

It might sound and counterintuitive that the classic version of Epcot, sans food kiosks and event displays, is known as ‘Diet Epcot’ but that’s because it’s actually the less busy and cluttered incarnation of the park. Diet Epcot also encompasses less of the year, with it now gone and the festival season again underway close to uninterrupted between now and the end of May 2019.

Already, this has been noticeable in terms of the ‘feels like’ crowds at Epcot. Our visits to the park this summer and even in the days leading up to Food & Wine were incredibly pleasant and devoid of crowds. There were regularly times when we saw posted waits of 30 minutes for Frozen Ever After or Soarin’ Around the World, and large swaths of pavement were visible in World Showcase.

The start of the 2018 Epcot Food & Wine Festival was like flipping a switch on the latter, with significantly more people filling in the space of World Showcase. Crowds still aren’t terrible (that’ll happen towards October), and wait times are still pretty moderate–hence the ‘feels like’ crowd levels being higher.

Speaking of the festival, let’s start with a few things we didn’t cover in our First Impressions & Photos: 2018 Epcot Food & Wine Festival post… 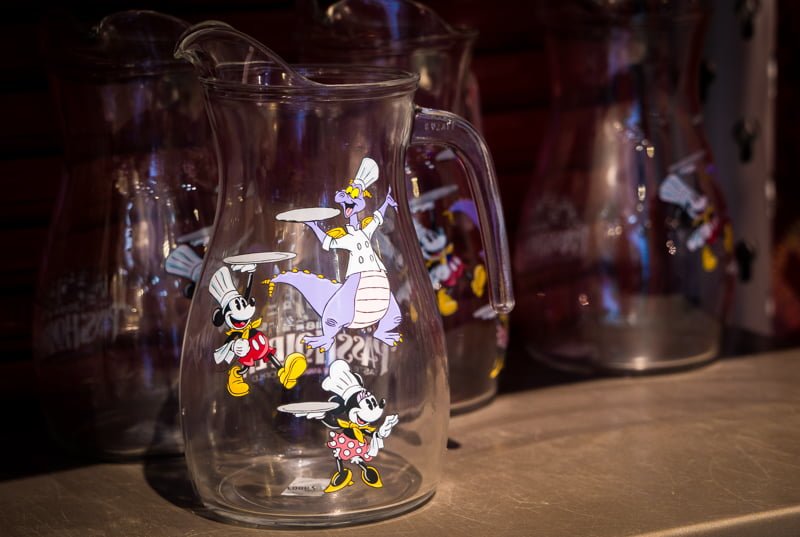 Lots of Annual Passholder merchandise for Food & Wine features pie-eyed Mickey & Minnie and Figment. We really like the design of this pitcher, but I’m not sure what we’d do with a pitcher.

Speaking of Food & Wine, thanks for the enthusiastic responses to our Belgium Booth Review, which made (what was meant to be) an offhand remark about tepid reader interest. Clearly, I misread the room–many of you did enjoy them. As noted there, taking a break from doing those reviews was just as much about me as you. 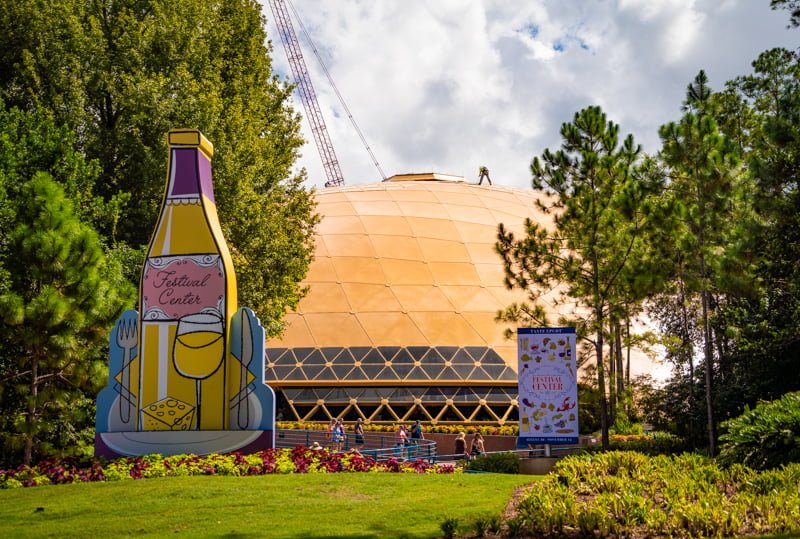 Anyway, after our Walt Disney World trip ended, we went to Paris to partake in the Le Rendez-vous Gourmand de Disneyland Paris, because we just could not get enough food festival action. Once we’re back, I plan to get down to business on more Epcot Food & Wine booth reviews. 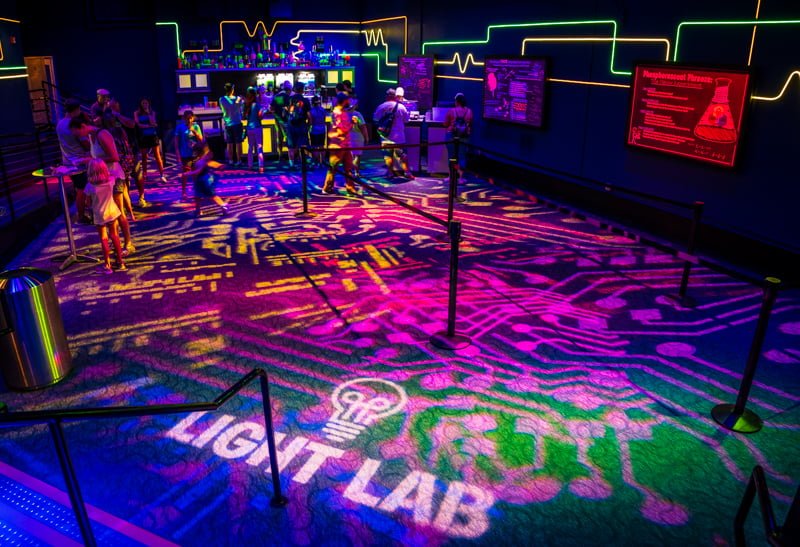 One booth we will not be reviewing is Light Lab. If you recall our Booth Review of Light Lab from last year, it was not exactly enthusiastic. I wanted to get one of the souvenir science flasks (Sarah had to correct me calling it a “beaker” like 46 times), but they were sold out each day we went.

I guess the moral of the story is to go to Light Lab early if you want some sugar water in a big-bottom beaker. 😉 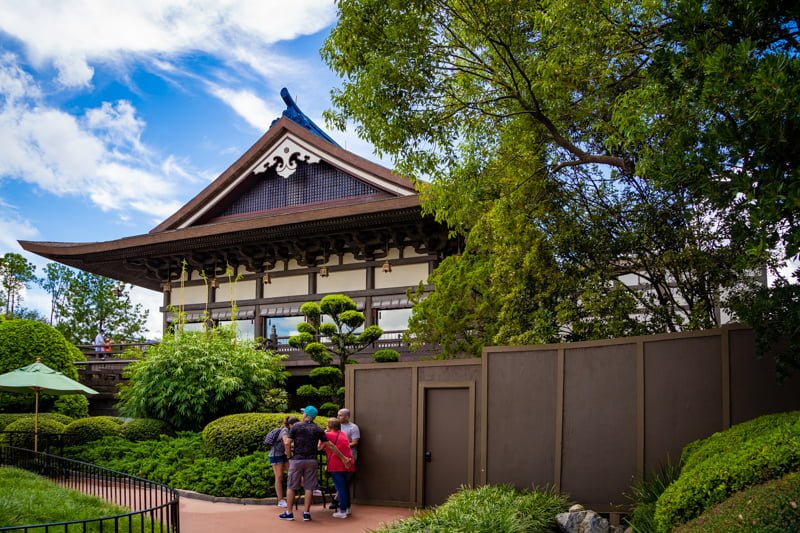 In World Showcase, trees have been cleared for the Signature Restaurant being added to Japan, and a construction wall has gone up.

Still no word as to when this restaurant will open or what it will serve. We’re holding out hope that it’s an intimate, high-end experience. Hopefully something excluded from the Disney Dining Plan.

Back on the other side of World Showcase Lagoon, here are some views of the Ratatouille trackless dark ride construction from various spots: 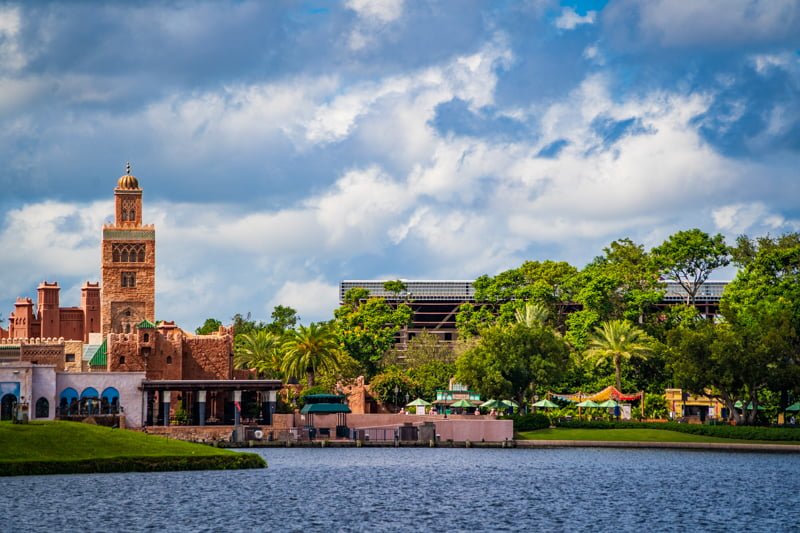 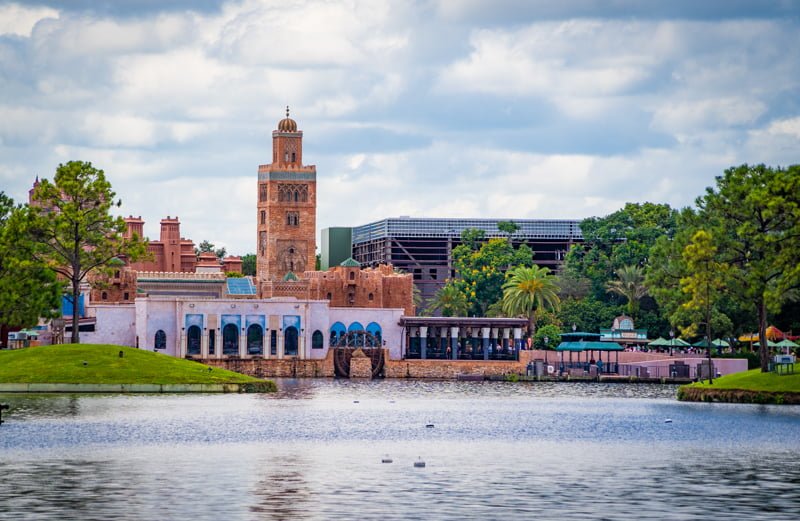 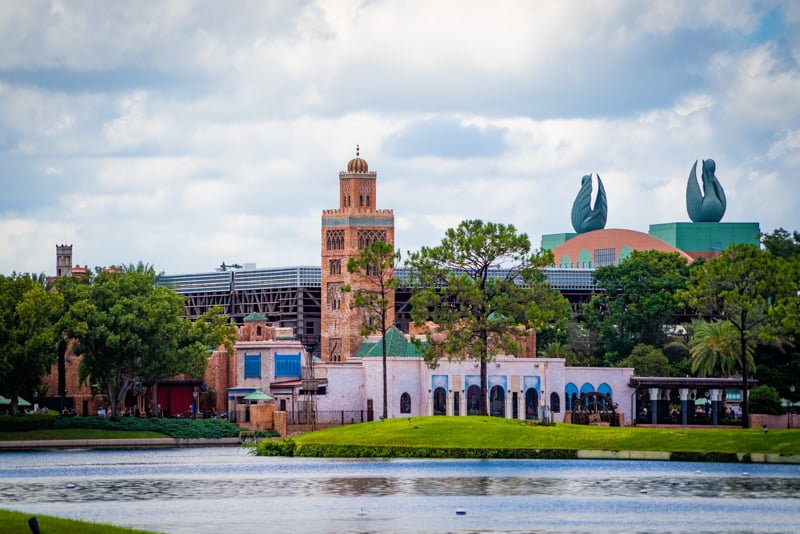 One thing that I think it’s important to underscore here is that these are photos taken with a super-zoom lens, and not what you’d see with the naked eye.

In other words, there isn’t some massive off-theme building towering behind Morocco. To the vast majority of guests, this is barely noticeable, and once finished, I doubt it’ll be some huge thematic intrusion.

On the other hand, here’s a few perspectives on the Guardians of the Galaxy ride showbuilding… 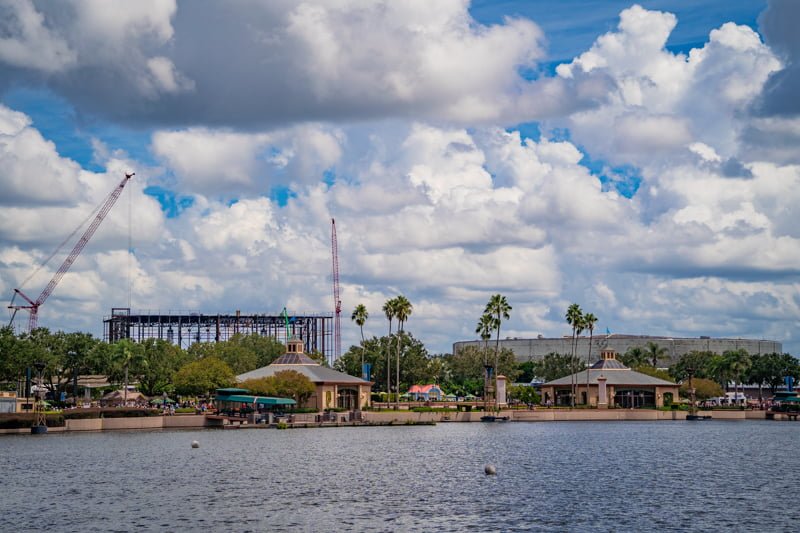 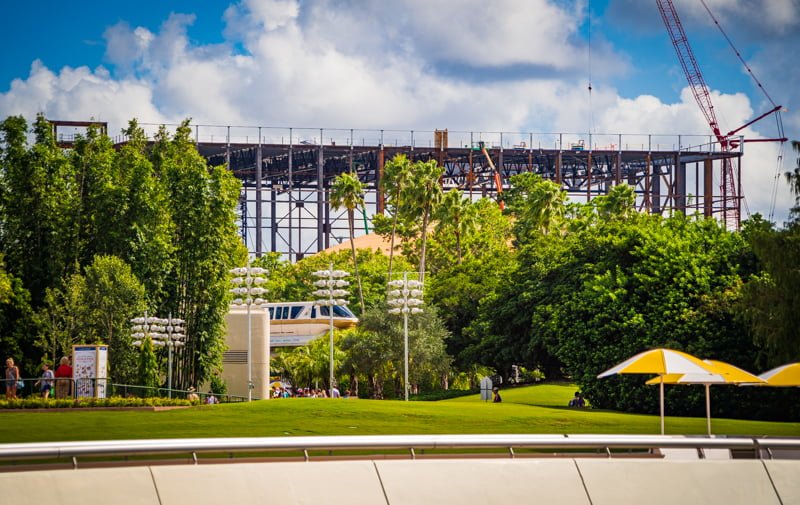 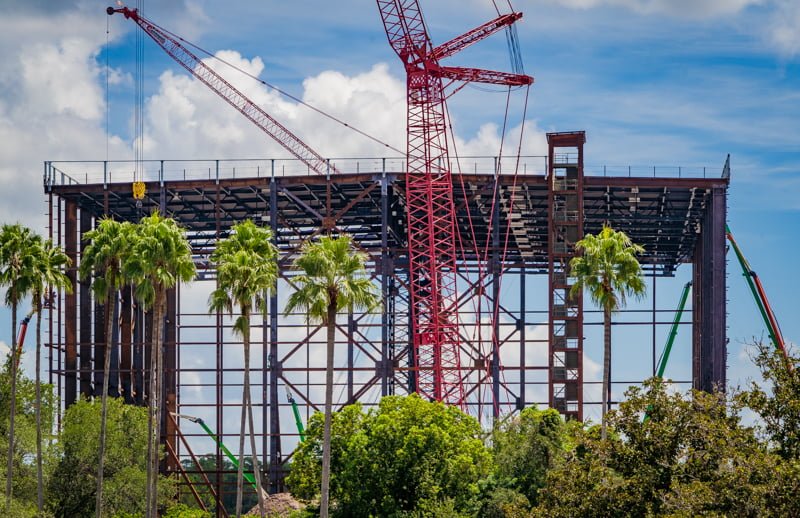 Unlike the Ratatouille construction, this is very much noticeable from numerous locations within Epcot. It’s rumored to be an unthemed show building, in which case it’ll likely be painted sky blue like Soarin’s theaters.

I’ve read a ton of complaints about this, and Disney “cheaping out” on theme. Honestly, I’m not sure whether that’s such a bad thing here. Do we really want a Mission: Breakout “kind of warehouse, fortress, power plant” with pipes, other junk, and vibrant colors distracting from the majesty of Spaceship Earth.

As someone who really doesn’t want a Guardians of the Galaxy attraction in Epcot in the first place, I’d rather have its presence minimized to the greatest degree possible. If that means Walt Disney World “cheaping out” by coating the showbuilding in light blue paint rather than pipes, so be it. 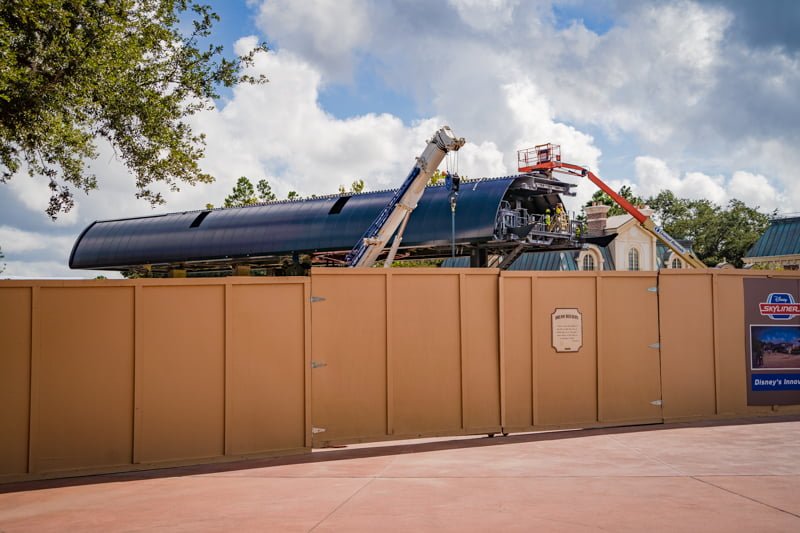 Leaving Epcot via the International Gateway, we see progress on the Skyliner gondola station.

My big concern with this station is that it won’t match the International Gateway (or World Showcase) architecture in terms of depth and finishing. You can see how the surrounding rooftops appear in the photo above, and concept art for the Skyliner does not look that nice.

I’m incredibly pleased by Walt Disney World’s huge growth initiative for the 50th Anniversary, but one of the downsides of so much simultaneous construction is that details get cut to prevent budgets from spiraling out of control. Beyond that, there are so many worldwide projects right now that I can’t help but wonder if Imagineering has a large enough talent pool for everything. “Lesser” projects like this and hotel work may not have the brightest creative minds working on them. 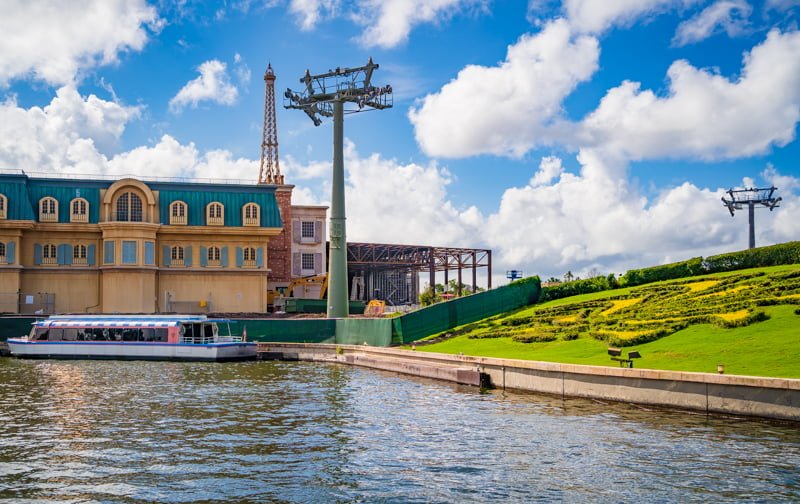 Looking the other direction from the gondola station, we again see the Ratatouille show building construction as well as a couple of Skyliner pillars.

This view might make you cringe, but from inside the park the Skyliner pillars are barely visible, and don’t interfere with sightlines much at all. Here’s how things currently look: 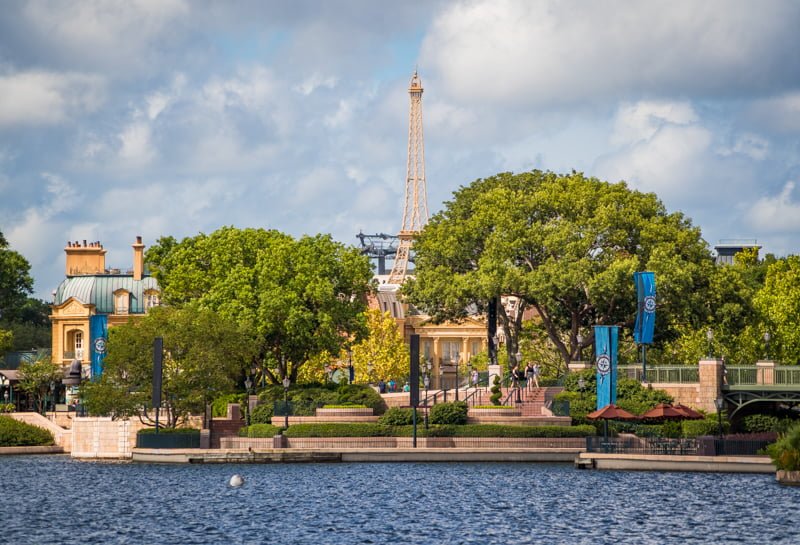 My hope and assumption is that the Eiffel Tower will be relocated once the France expansion is complete. If not, guests will be able to walk behind it, and I’m not sure the illusion will work from that vantage. It looks much better appearing to be ‘off in the distance’ like this.

Overall, there’s a lot happening right now at Epcot, with even more on the horizon. We didn’t get to it in this post, but we still don’t have an official announcement on the rumored IllumiNations replacement (Window to the World) and interim show, which is still happening to our knowledge. There’s also the China film, Epcot Central Spine, unannounced new country & new attractions in World Showcase, and more. Suffice to say, it’s going to be a busy next several years at Epcot, and we’ll keep these updates up regularly as the park expands and transforms.

What do you think of the current state of Epcot, and its construction projects? Excited for festival season at Epcot? Thoughts on the colossal show building for Guardians of the Galaxy, and how/whether it’ll be concealed? What about Ratatouille or the Skyliner? Any questions we can help you answer? Hearing your feedback is both interesting to us and helpful to other readers, so please share your thoughts below in the comments!