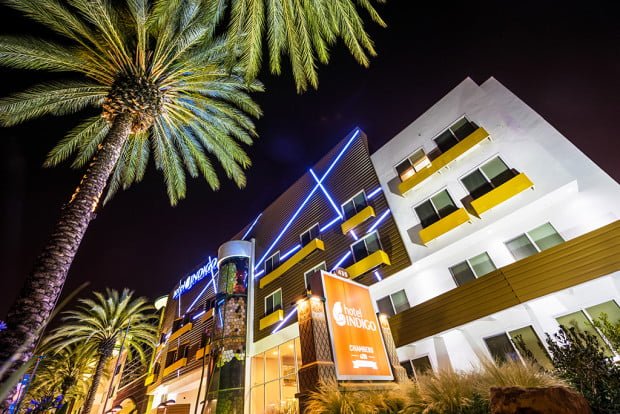 Hotel Indigo Anaheim is a Disneyland Good Neighbor Hotel on Katella, 10 minutes from Disney California Adventure & Disneyland. This review has room photos, info about amenities, and thoughts about our experience of staying here. For starters, Hotel Indigo offers hip & modern accommodations, and one of the best off-site hotels near Disneyland, ranking #2 of 115 hotels in Anaheim on TripAdvisor.

In terms of location, Hotel Indigo Anaheim is near Anaheim GardenWalk, pretty close to the intersection of Harbor Boulevard and Katella Ave. Being only a 10 minute (slightly more, depending upon how you hit the intersection signals) walk to Disneyland, combined with its trendy style makes Hotel Indigo a really appealing hotel for certain demographics.

I’ve written variants of this “perhaps the best” line several times while I’ve reviewed hotels near Disneyland, and that’s partly because it’s an evolving process–I didn’t stay at all of these hotels in succession and then start writing reviews of them. I have stayed at them over the course of time (albeit the bulk of stays have been recent, 1-night test stays), so things have changed as I’ve gained experience. Expect a post with definitive rankings once I “finish” staying at the bulk of the good options in the immediate vicinity of Disneyland (along with updates to older reviews).

The other challenge is that there are several different categories or tiers of Disneyland Good Neighbor Hotels. There are the “proximity” hotels that are right across the street from the Esplanade; there are the “business” or chained-brand Convention Center hotels; and then there are options like Hotel Indigo that are somewhere in between.

Hotel Indigo competes with the very best of the Convention Center hotels in terms of room quality with a bit of a fresher edge, but also offers a far more desirable location for those primarily interested in visiting the parks. I’d liken it to a cross between one of the Anaheim Convention Center hotels and Hotel Menage, actually. Ideal for adult couples or business travelers, but not so trendy as to scare away parents.

Before we delve further, let’s start with a bit of background about Hotel Indigo. It’s InterContinental Hotels Group’s “boutique” line, and they are trying to expand the line into urban, mid-town, and near-urban markets proximate to entertainment venues. The LA Times compared Hotel Indigo to W Hotels, saying, “both W and Indigo are pitched for younger travelers and have fanciful designs that reflect their local settings.” Based upon what I saw in the Anaheim location, that sounds more or less right.

To get an idea of how it stacks up to the competition, check out our Disneyland Hotels Reviews & Rankings post. You can also read our overall comparison of the benefits of staying off-site versus on-site in our Where to Stay at Disneyland post. So what are the pros and cons of staying at Hotel Indigo Anaheim? Let’s take a look… 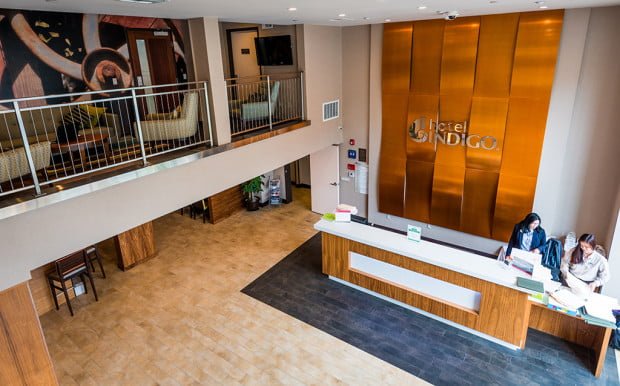 Outside and in, the common areas of Hotel Indigo look pretty chic. The hotel opened two years ago after a $5 million renovation converted it from a Holiday Inn Express.

The results are positive, with the hotel having a fresh and hip vibe. It does not feel like a simple, cheap re-branding in order to sell more expensive rooms. Well, it mostly doesn’t. 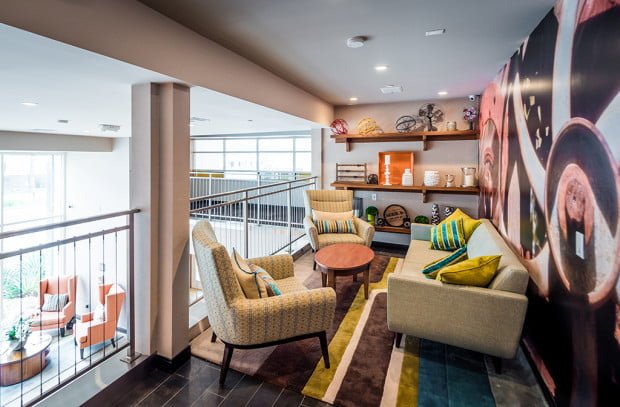 I arrived at Hotel Indigo Anaheim before my room was ready, and the courteous staff provided me with a key to the lounge area that overlooks the main lobby where I could use the WiFi and watch TV. Definitely a nice little area. 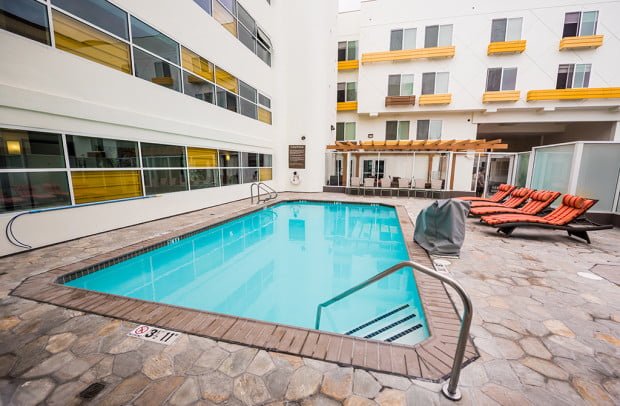 The pool was a disappointment. As with many hotels in the area, it’s distinctly utilitarian, but I definitely expected more given the overall quality of the hotel.

While there are some nice lounge chairs and a covered “spa” area (not really a spa), this feels like a distinct holdover of the old Holiday Inn Express. 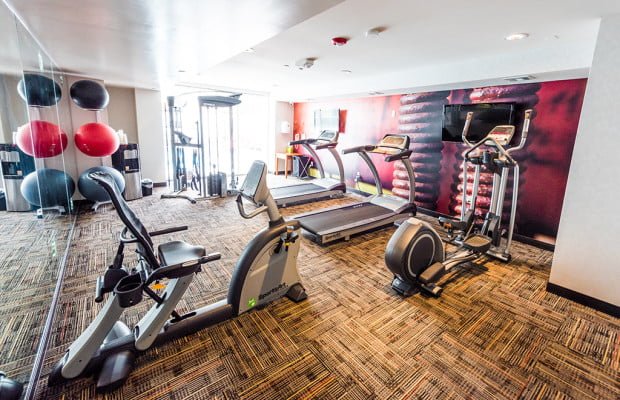 Likewise, the fitness center is very basic. It works if you want a light work-out, but with both the pool and the fitness center, I felt like the hotel was going more for boxes to check-off on an standard amenities checklist than trying to really offer a nice guest experience. 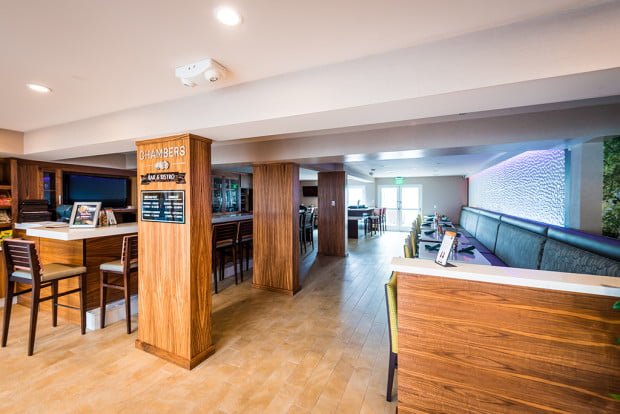 I didn’t dine in this bistro, but overheard other guests praising it at checkout. Based upon some of the signage, it sounds like they have good happy hour specials. 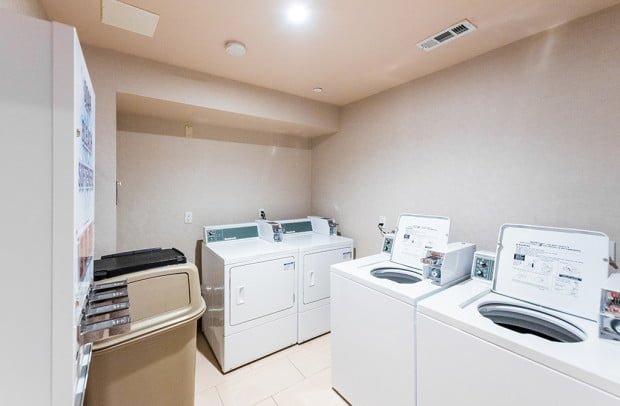 While solid, Hotel Indigo Anaheim definitely falls short of the Convention Center heavyweights in terms of amenities. These amenities are like an enhanced version of what you’d find at a Harbor Boulevard hotel.

For many travelers, this won’t be a big deal, as most of the important things are there for non-business travelers. Really, the only major disappointment is that pool. 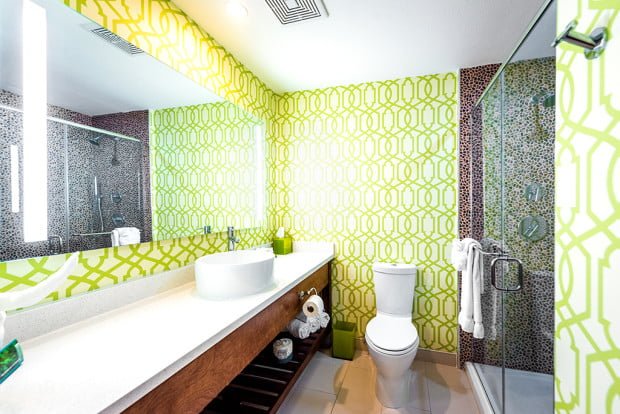 The guest rooms are where Hotel Indigo Anaheim really shines, and I think will be the basis for most people choosing to book this hotel. I’ll start with the bathroom, because that’s the “bigger deal.” Most of the time, in these reviews, I devote only a couple lines to the bathroom as Anaheim hotels usually phone it in when it comes to bathrooms, which is true even of the Convention Center hotels.

The bathroom is the bright spot at Hotel Indigo Anaheim. The space is well-utilized, there’s nice in-mirror lighting and a vessel sink, and there’s a nice selection of high-end Aveda toiletries. Most importantly, there’s a walk-in shower rather than a bathtub! 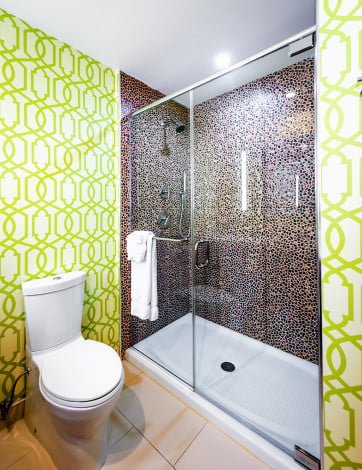 I know those with children might scoff at this, but this is becoming industry standard, and I far prefer it to a tub. The majority of modernized hotels rooms at which we’ve stayed that aren’t near Disney parks have this type of setup, and for those of us who haven’t taken a bath in the last 20 or so years, it’s nice.

Those with kids who don’t shower can always stay in the ~834 other hotels in Anaheim with bathtubs. 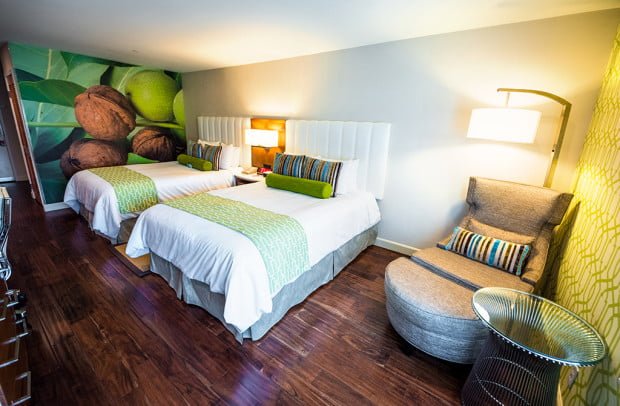 The sleeping area was also super nice and trendy, what with the large walnut art on the wall and all. Huh? You’ve never seen walnut wall art?

Clearly, you are not hip if you don’t get down with walnut wall art. It’s all the rage right now, and if you don’t understand it, I’m not even about to explain why this is so rad… 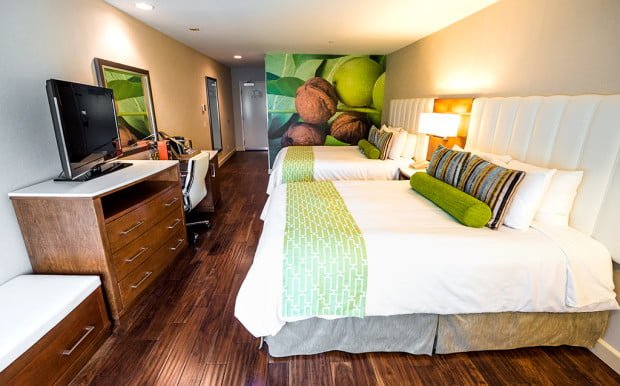 Okay, really…what’s with the walnut wall art? I’ll admit I’m not cool, and I don’t “get” this. At all. Is it some SoCal hipster thing? The walnut motif is all over this hotel, and I have no clue why. Hotel Indigo’s brand page indicates the design influence of its locations is “truly reflective of the local community.” I’m not sure what walnuts have to do with Anaheim. Wouldn’t oranges be more fitting? The only thing I see connecting walnuts to Anaheim is this, and I don’t think an assisted living center exactly says hip or a “refreshing and inviting guest experience.”

(UPDATE: The mystery of the walnuts has been solved. “Apparently, the hotel is located near what used to be a wagon trail that connected several ranches responsible for producing nearly half of America’s walnuts in the early 1900s.” Well…umm…okay?)

Irrespective of that, the room does feel refreshing and inviting, with some excellent design choices that make it feel trendy (at least to my un-cool eyes). Everything from the sleek desk lamp to the chair in the corner adds to the design. The beds are also incredibly comfortable, about on par with the nice bedding at Convention Center hotels. 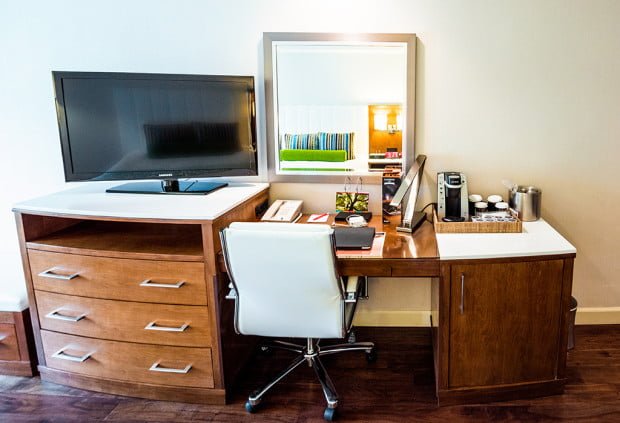 There’s also a fully-stocked Keurig machine if you want coffee or tea, and a mini-fridge in the rooms. As a whole, I’d actually put the guest rooms above the Convention Center hotels, with this being the nicest guest room at which I’ve stayed in Anaheim thus far.

Booked directly, Hotel Indigo Anaheim costs around $165-200/night before tax depending upon season, which makes it more expensive than the “proximity” hotels and more in line with the “business” hotels in terms of cost.

Parking and WiFi are both included in that rate, but it’s still pricey. The good news is that you can find deals in the $125-150 per night range for select dates. We’d say it’s worth those rates.

Overall, Hotel Indigo Anaheim ranks right up there as one of my favorite hotels near Disneyland–my second favorite hotel now, actually (Park Vue Inn remains the top dog). Price is the biggest downside for me, but at the ~$125/night rate I can score it, it’s not that bad. About the closest competitor to Hotel Indigo Anaheim is Hotel Menage (which I previously reviewed). While Hotel Menage offers stellar amenities and an average guest room, Hotel Indigo delivers a stellar guest room and (slightly above) average amenities. Personally, I much prefer Hotel Indigo of the two. While it’s not the closest hotel to Disneyland, the walk isn’t bad, especially compared to other high-quality hotels. If you want want a “cool” place to stay for your trip to Disneyland, Hotel Indigo is a wonderful option that I’d highly recommend for honeymooners on a budget, solo adults, or hip parents whose kids are showering age.

Have you stayed at Hotel Indigo Anaheim? Did you enjoy your stay? What did you think of the guest rooms? Considering this hotel? Do you prefer staying off-site or on-site at Disneyland? Please share your thoughts or questions in the comments section below!