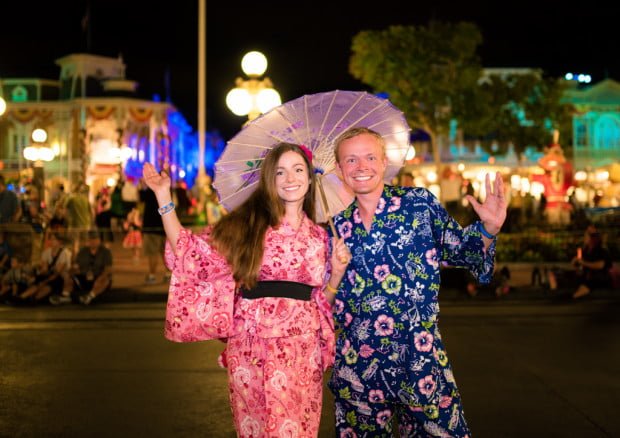 We attended the Mickey’s Not So Scary Halloween Party at Walt Disney World on October 6, 2015. This post features photos and thoughts on the party this year, including crowds, characters, new offerings, and random tips. We’ll have a few “reports” from our recent Walt Disney World trip in the coming weeks, with this being the first.

Before we get to our report on this year’s Mickey’s Not So Scary Halloween Party, pictured above are our costumes for this year. These are Disney Yukata, which are casual kimonos often worn in the summer to keep cool (one of our main “rules” in our Disney Halloween Costume Tips post). We purchased ours at Tokyo Disneyland during Tanabata Days, as having kimonos with Mickey & Minnie, Cinderella Castle, Mount Prometheus, and various Disney attractions on them seemed pretty cool.

Unfortunately, my kimono seems to resemble pajamas and/or a dress…or so snarky folks on the internet said. Not our most ambitious costume effort ever for Mickey’s Not So Scary Halloween Party, but fairly unique and practical given the weather. After the mistake of wearing a Beast costume a few years back, I’ve tried to focus more on being comfortable than having a killer costume–so many others do costumes so much better.

Alright, now let’s start with a look at the party itself… 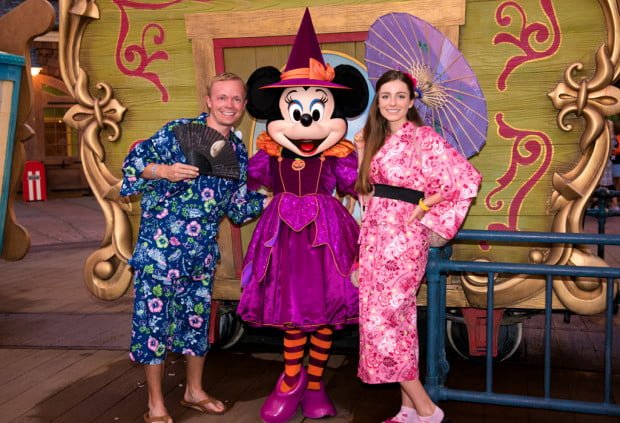 We started back in Storybook Circus at around 6:45 pm, getting in line to meet Minnie, Donald, and Daisy. If you’ve read our Mickey’s Not So Scary Halloween Party Tips post, you know this is not recommended, as these aren’t “high demand” characters. However, we’ve done this party numerous times in the last several years, and there weren’t really many characters we wanted to meet this year. 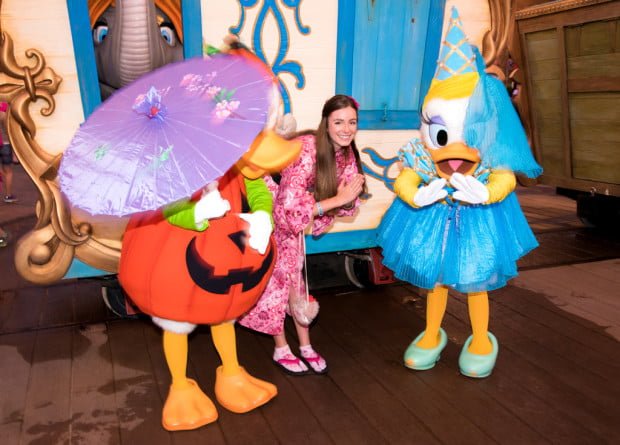 I have no idea what is going on in this photo, and I think that’s part of the fun. You know you had a good time at a meet & greet when you have a few “what the heck?!” photos. It means the characters weren’t just static photo props. 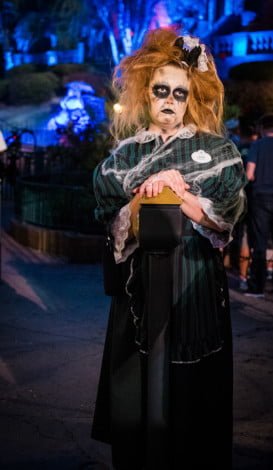 From there we headed over to Haunted Mansion to get some photos and see the always fun Lady Renata, and briefly enjoying the ambiance of the area, which is heightened for Mickey’s Not So Scary Halloween Party, with fog and various lighting effects. We don’t usually do rides during the Halloween Party, but spending time outside of Haunted Mansion is always a must (enter through the exit if you don’t plan on riding).

At this point, it was decision time. The first parade wasn’t starting for almost 45 minutes, which meant it wasn’t getting to Main Street for much longer than that, but we had been hearing reports of insanely busy Halloween Parties, so we decided to err on the side of caution. We scoped out a few potential spots on Main Street, ultimately opting for a location in Town Square.

Then we waited…and waited…and waited some more. To make matters worse, we could have snatched the same spots we got 30 minutes later than we did. Despite this being an October party, it did not seem exceptionally crowded to us–certainly not even close to as bad as reports from prior parties this year. We always try to do weeknight parties (as those are the best days to go to avoid crowds), but usually in September, so I was a little concerned. Turns out that it was probably one of the less-busy parties we’ve attended in the last 3-4 years. 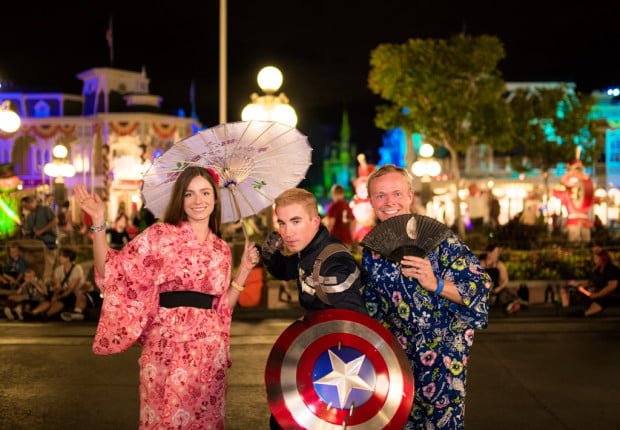 On the plus side, we picked spots right next to Chris Evans, and he was gracious-enough to take a photo with us and share some of his thoughts on politics, espionage, Donald Trump, the trials & tribulations of being a super soldier, and camera settings for photographing the ballroom dancers in the Boo to You Parade. Turns out Mr. Evans is a big fan of the parade. He seemed to be a good sport about the fact that Walt Disney World hadn’t given him VIP seating and he had to stand among the unwashed masses like us, calling it his “patriotic duty” or something like that.

The Boo to You Parade was awesome as always, and this spot in Town Square was solid for being better lighting while retaining the excellent ambiance of Main Street. This parade remains my white whale for photography, so take my opinion with a grain of salt, but I think I’d go as far as to call this the second best spot for the parade. 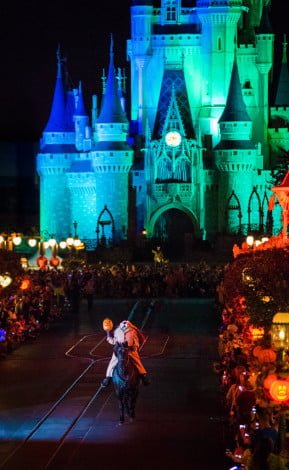 When it comes to the Headless Horseman, catching someone else’s flash doesn’t hurt. I ran upstairs in the train station to snap this one, and then ran down… 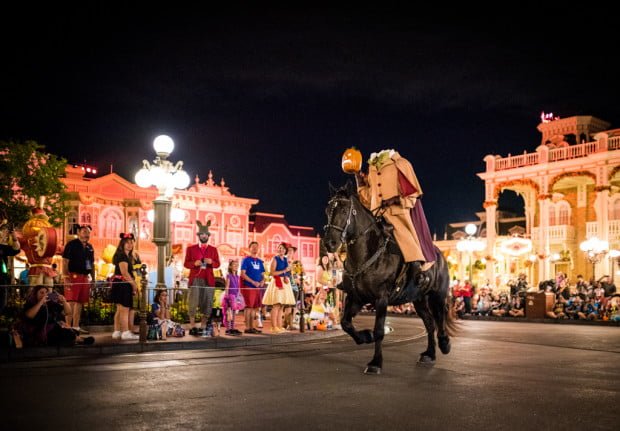 …for this one. This shot illustrates why this Town Square location is nice for photos. This is a tough parade to shoot, but the lighting here makes it a lot easier. 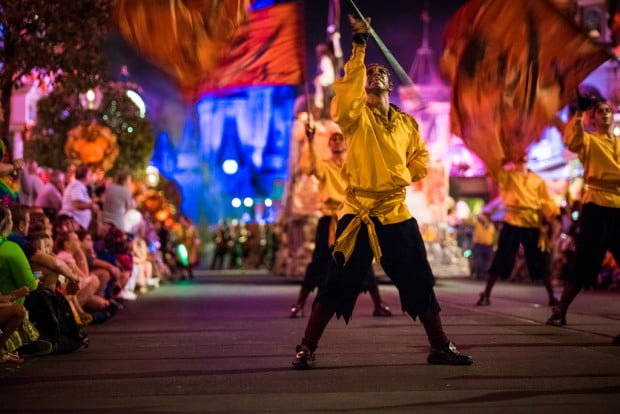 Boo to You is one of those things that I hope is not outright replaced at any time in the near future. I think the parade has aged incredibly well, and while I’d love to see a new float added here or there, this is Walt Disney World parade-perfection, and I don’t see it having the same problems aging poorly (I’m looking at you, Main Street Electrical Parade) as other parades. We always make sure to see it twice each time we go to Mickey’s Not So Scary Halloween Party, and it was as good as ever, with one minor exception… 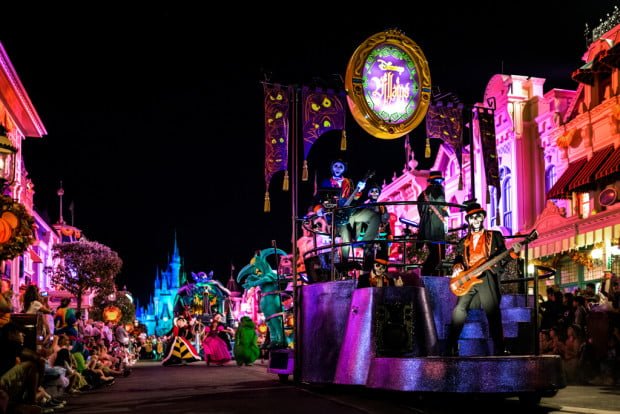 Okay, controversial opinion time. This year, there is no graveyard caretaker and his dog in the Haunted Mansion unit of the Boo to You Parade. The internal reason for this that I’ve heard from those in the know is that it’s out of respect to the dog who previously “played” the part, and passed away prior to the start of this year’s parties. I know that here in America we respect canine life more than human life, but this is ridiculous. This is a lame excuse to not hire a performer to play the caretaker, or to find another dog.

Honestly, I can’t believe I had to even preface the previous paragraph with “controversial opinion time.” The only reason I did was because a friend expressed similar sentiment on Twitter, and was criticized for a lack of compassion. How about some “compassion” for the guests paying $60-70/person for the party, 99.99% (probably a low estimate) of whom have no idea that the actor-dog who previously played the part passed away? Should entertainment quality for tens of thousands of paying guests really be sacrificed to pay tribute to a dog? 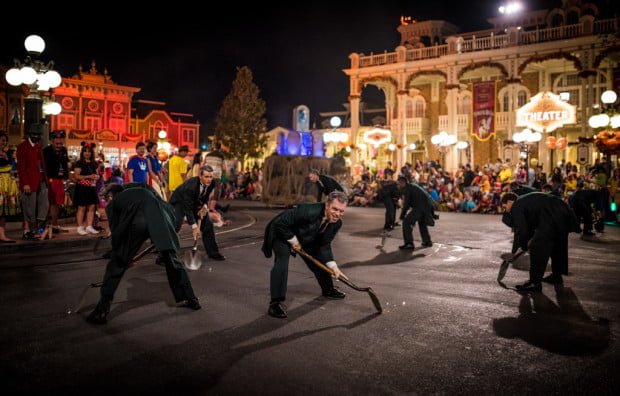 We all love Walt Disney World, but let’s be reasonable: this is nothing more than a calculated business decision. It’s one less performer to pay that guests may not notice, with a superficially benevolent justification as to why it’s being done. The problem is that it doesn’t hold up to any kind of scrutiny, and is inconsistent with past precedent.

This certainly isn’t how Disney “honored” Michael Jackson (Captain EO was brought back to pay tribute), Robin Williams (the Genie remained prominent in Aladdin the Musical), or that friend of Gaston (continues doing in-park meet & greets) when each of them passed, because that style of honoring them wasn’t the best business move. If this were truly about honoring the dog, why not have the new dog wear a ribbon on its collar to pay tribute? 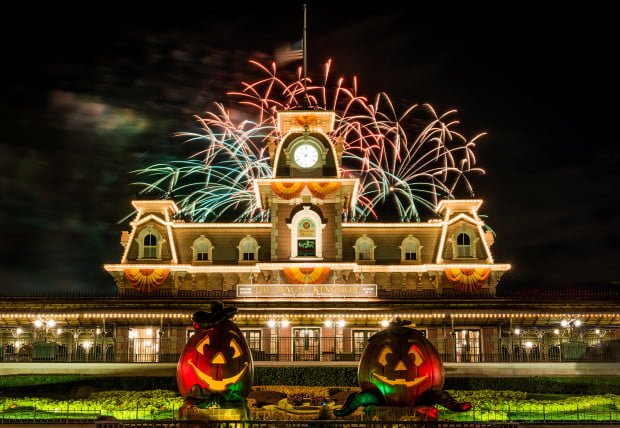 After the first parade, it was time for the always-enjoyable HalloWishes fireworks. It was crazy to see just how many people left the Halloween Party after the first parade, and there was a ton of empty space back in Town Square where we watched the fireworks (towards the hub was more crowded, I heard). I get that a lot of kids can’t last until midnight, but if I were paying $200+ for a family of 4 to attend the party, I’d want to make darn sure the kids were rested and could last more than 2.5 hours of the party. To each their own, I guess. I also don’t light my cigars with $100 bills (only fifties).

Following the fireworks, we normally would have thought about getting a spot for the second parade, but our good friend Chris Evans swooped in like a true hero, and agreed to save our spot while we got more character photos. Sarah claims this wasn’t actually Chris Evans, but instead our friend Mark Willard, but I watch 3 hours of TMZ per day. I think I know what Chris Evans looks like. (Although that might explain why the autograph on my forehead simply said “Mark,” but I thought it was some sort of getting into character bit, like Tom Jane getting ready for Homeless Dad.) 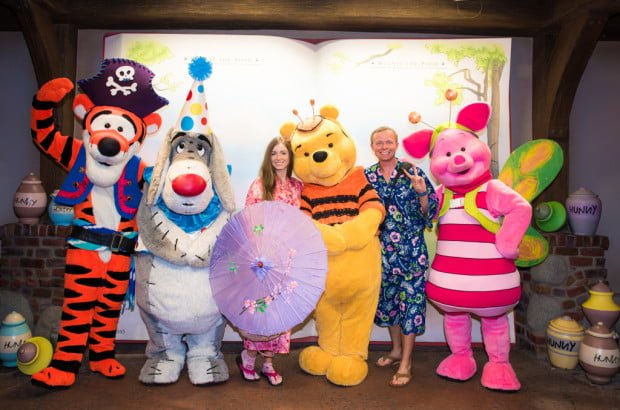 In any case, we raced back to Fantasyland, where Pooh and Friends were meeting in Halloween costumes. We’ve done this meet and greet a few times, but not for several years, and not since they started meeting together. The line was flying, and we were pretty shocked by this. Then, we got to the front and realized it was because they would only take one photo, of your entire group.

I’m all for speeding up high-demand meet & greets, but we would have gladly waited twice as long if it meant having a bit of an actual experience at the meet & greet. There has to be a happy medium between a 5-minute encounter with multiple cameras and phones, and standing in front of the characters without any interaction as if they are a background prop before quickly being pushed through. I’m hoping this isn’t the norm at this spot, or at least isn’t the norm when there are little kids who start interacting with the characters (the groups in front of us that we observed were all teens and adults). For us, it was fine because all we really wanted was an updated photo. 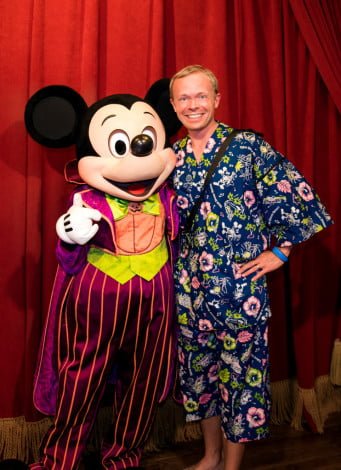 Following this, we went to Mickey’s Meet & Greet in Town Square. We’ve done this several times in this location, but somehow, not since they started doing it with talking Mickey. The technology for this isn’t totally there, but this still sort of blew my mind. The interactions were sufficiently fluid for it to be believable for kids young-enough to think Mickey is real in the first place, and it was flat out cool.

This is probably old news for most of you (and I’m still not quite sure how we’ve managed to miss it), but we were both very impressed. In watching the reactions of both kids and adults, it seemed to me like this is one of those experiences that alone probably makes the trip worth it for a lot of families. I’m not a parent, so I cannot even fathom the idea of my kid having a conversation with Mickey Mouse, but I’m betting it would be one of those ‘fighting to hold back the tears’ moments. As for us, Mickey greeted us with konnichiwa and told us he had a place out in Toontown when we told him where we lived, both of which were good situational engagements, I thought.