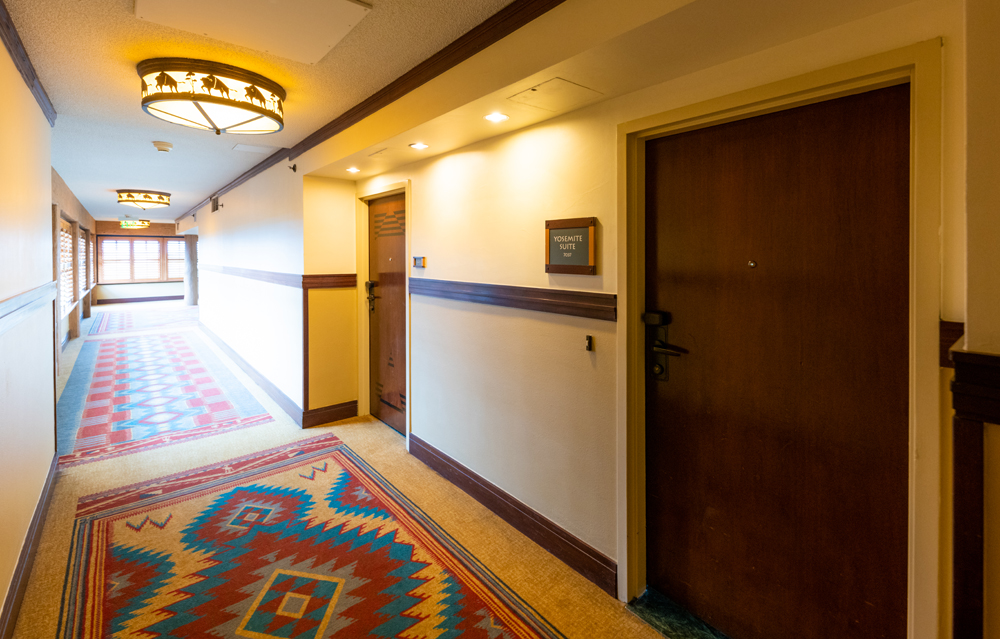 Yosemite Suite is the Vice Presidential room at Wilderness Lodge. In this Walt Disney World hotel tour, we’ll take a look at what makes it so special, with photos and video of my ‘dream suite,’ thoughts on its attention to detail and thematic integrity.

We’ve stayed in a lot of cool Walt Disney World rooms: the Polynesian Bora Bora Bungalows, Cascade Cabins (also at Wilderness Lodge), and Treehouse Villas at Saratoga Springs. We’ve also toured the Presidential Suites at both the Grand Floridian and Four Seasons Orlando. Even if money were no issue, the Yosemite Suite is what I’d pick if I could choose to stay anywhere at Walt Disney World.

None of this is any secret or should be a surprise to regular readers of the blog. I’ve been obsessed with this room since stumbling upon this charming video from 1994 years ago. Since then, I’ve mentioned the Yosemite Suite at Wilderness Lodge being a bucket list entry several times, most recently in our Dream Walt Disney World Vacation for Lottery Winners post.

Alas, we neither won the lottery nor did I actually cross staying in the Yosemite Suite off my Walt Disney World bucket list. Sarah called to price out the Yosemite Suite as a surprise one night stay, but the rates were a bit much (to put it mildly). So instead, we “settled” for a night in the Old Faithful Club (review of that Club Level experience coming soon). 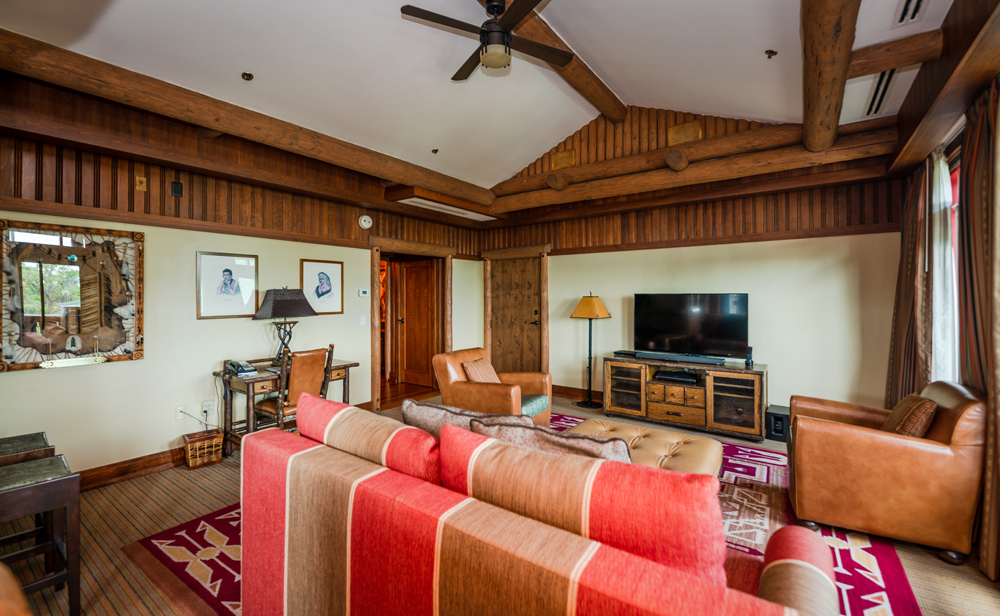 While there, Sarah was able to get us inside the Yosemite Suite for a brief tour. I’m not sure what kind of magic she worked for that, but she could probably talk her way into the Area 51. (No need to storm it.) By contrast, I don’t think I could charm my way into a few extra fries at McDonald’s.

Let’s start with a quick video walk-through of the current Yosemite Suite:

If you watch the 1994 video (and I highly recommend doing so), one thing that stands out is that the cowboy motif has been toned down considerably.

There are still a few vestiges of this, but by and large, they’ve been removed from the furniture and decor. 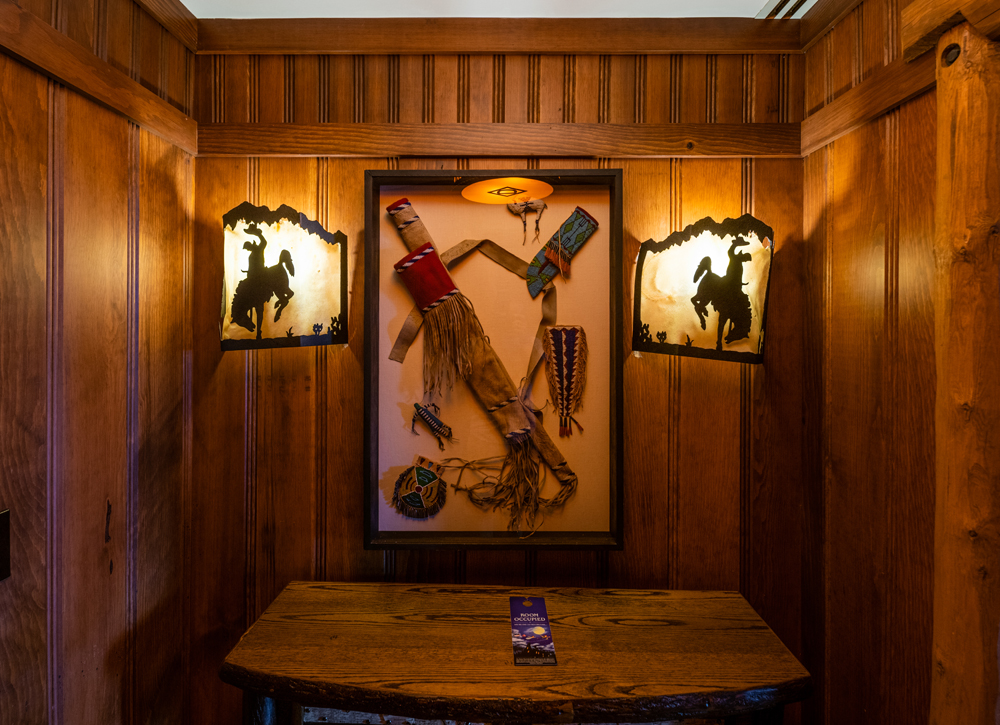 I was relieved to see this. I have nothing against cowboys–they’re great symbols of the frontier, Americana, and even kitsch. However, they’re not particularly relevant to Yosemite National Park or the other inspirations for Wilderness Lodge.

I don’t recall ever seeing anything cowboy-related at the Ahwahnee, aside from maybe a Frederic Remington bronze sculpture (but that’s legit art; totally different vibe). 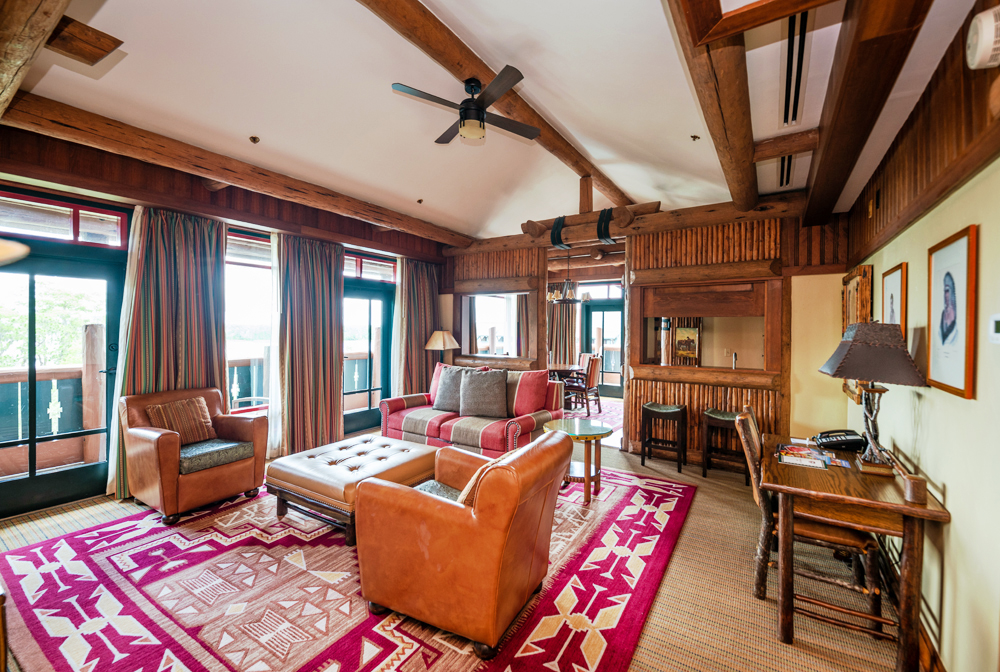 What I’ve always appreciated about Wilderness Lodge is that it treats its inspiration with sincerity and reverence.

Imagineering could’ve made the hotel as a cheeky and kitschy homage to the American West (and arguably did exactly that with Hotel Cheyenne and Santa Fe at Disneyland Paris), but instead crafted Wilderness Lodge as a romanticized and grandiose love letter to the U.S. National Park lodges. 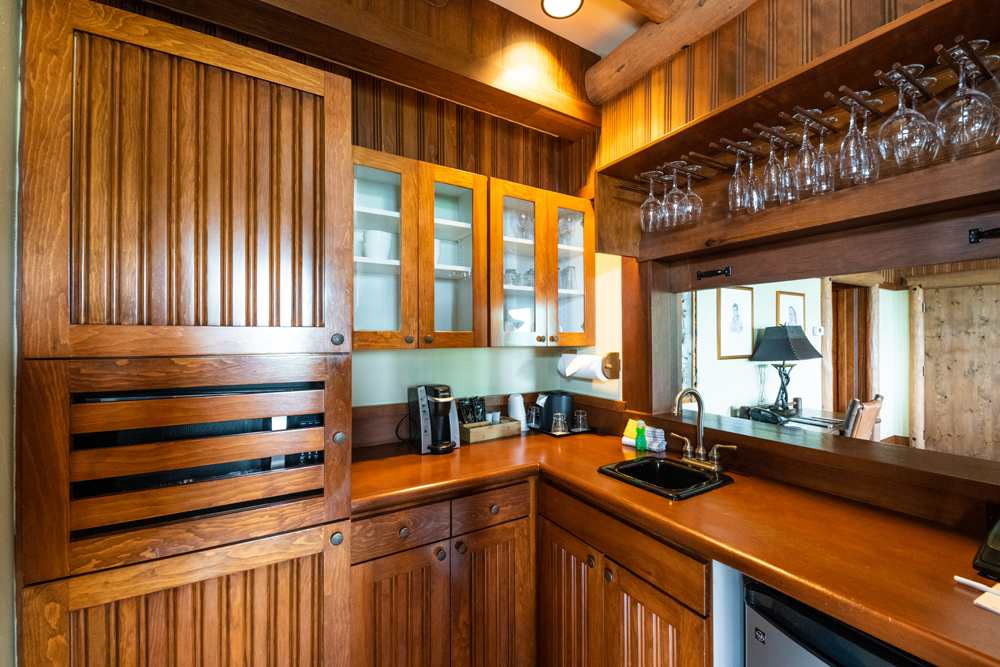 Of course, Walt Disney World isn’t a solemn place, so even Wilderness Lodge has elements of whimsy and playfulness to it.

You see this in Whispering Canyon Cafe, little Disney character touches, and the various bears and other critters around the resort. Maybe cowboys were construed the same way in the early 1990s? 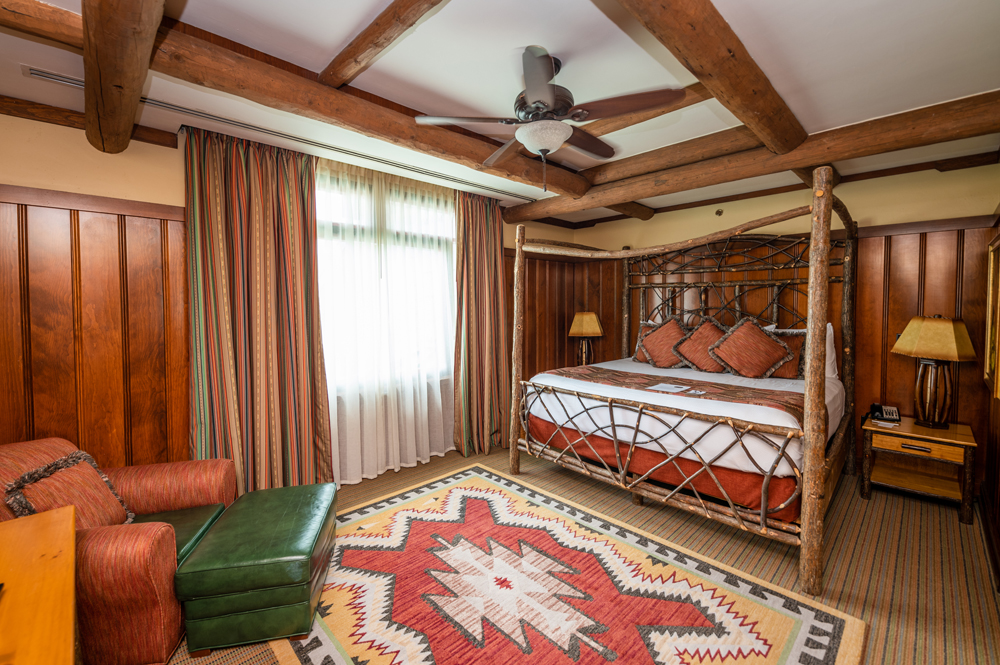 Enough about cowboys. I love the wooden canopy bed frame, which is also a more recent addition. This is one of those rare things that conveys both luxury and theme, and is just undeniably cool.

The use of woods, patterns, colors, and textures is just generally really strong. From the living room rug and bed runner to the furniture, it’s a suite that comes together really well. The details of the design reinforce one another, and it’s neither bland nor is it a sensory-overloading, clashing mess. 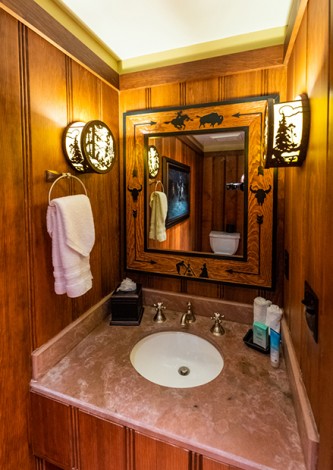 In fact, pretty much from start to finish, I think the Yosemite Suite is stunning–better today than it was when it opened. Part of this is probably the simple matter of tastes and styles changing.

Although as a themed room, this is always going to be something of a time capsule. 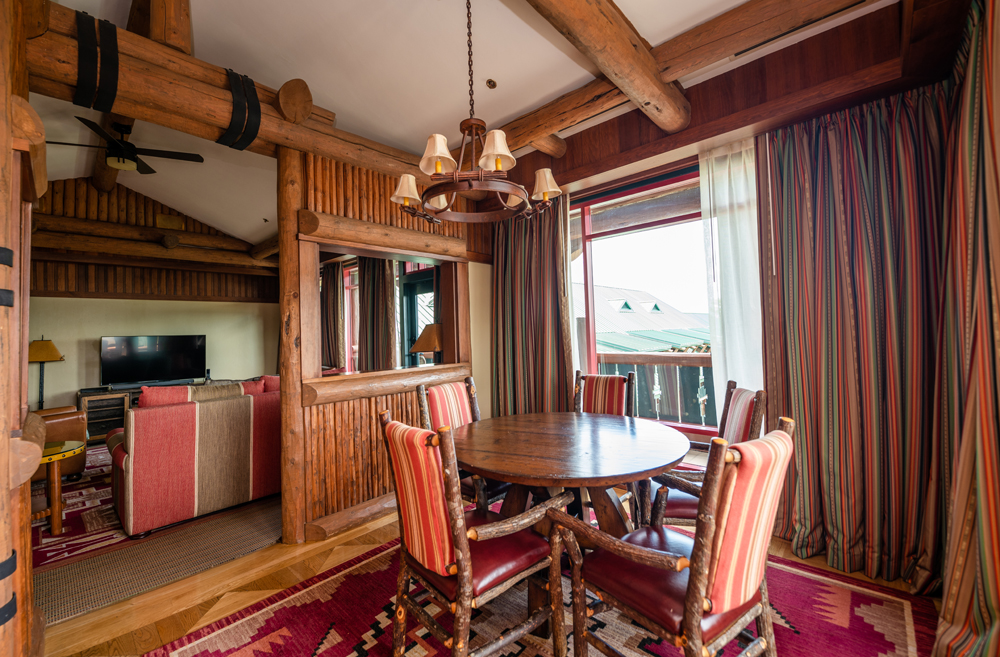 Nevertheless, it feels like a lot of the kitschy and borderline tacky details have been replaced with things that are on-theme but also stately.

About the only downgrade that I can see is the dining room chandelier, a couple other lamps, and in terms of little touches like table centerpieces (and a scale?!). 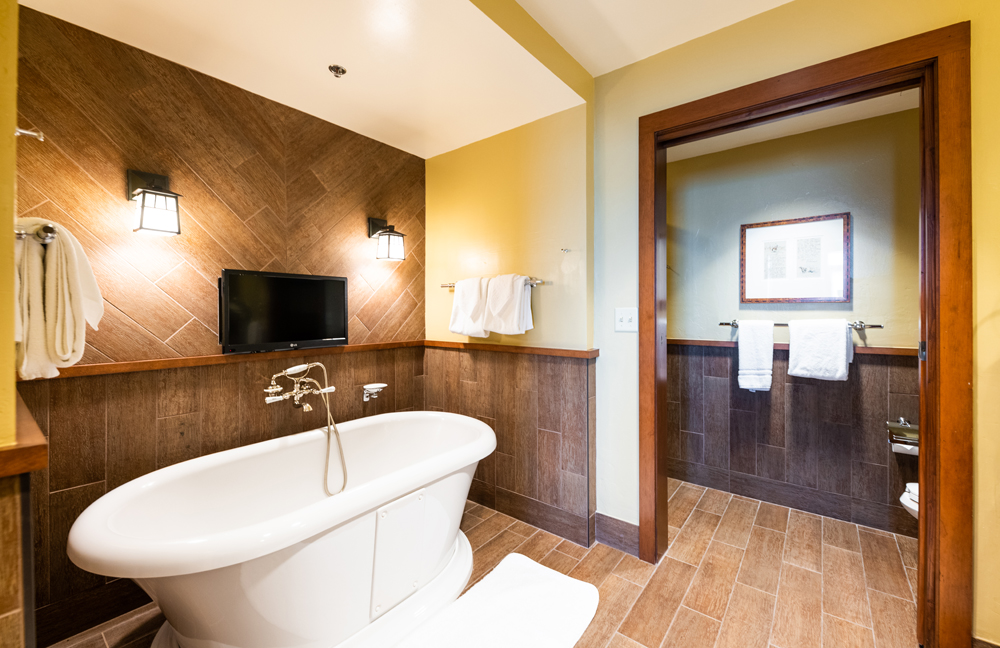 I’m also a sucker for the old bathroom tile-work, although that’s probably a 1990s thing that most would consider dated today.

The bathroom does feel like the one weak spot of the refreshed look. It’s just a bit blander than the rest of Yosemite Suite. 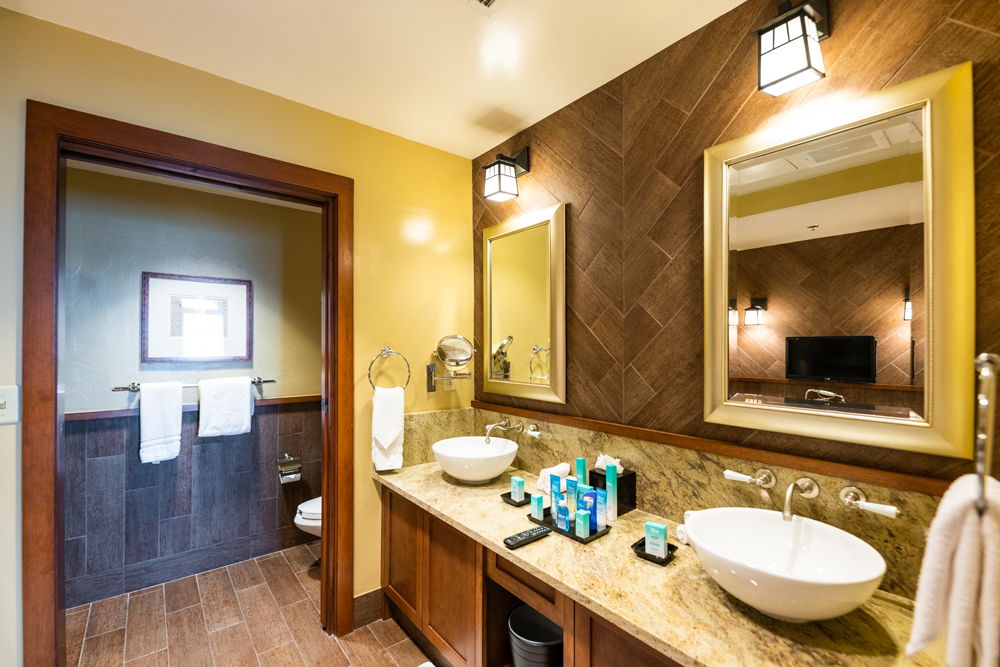 It’s like the design team knew it needed to be updated, and knew how in terms of substantive changes, but didn’t know what thematic flourishes should be used to keep it in step with the rest of the suite.

Still a relatively minor thing, and I can’t say I’ve ever really been wowed by a bathroom in a Walt Disney World hotel, anyway. 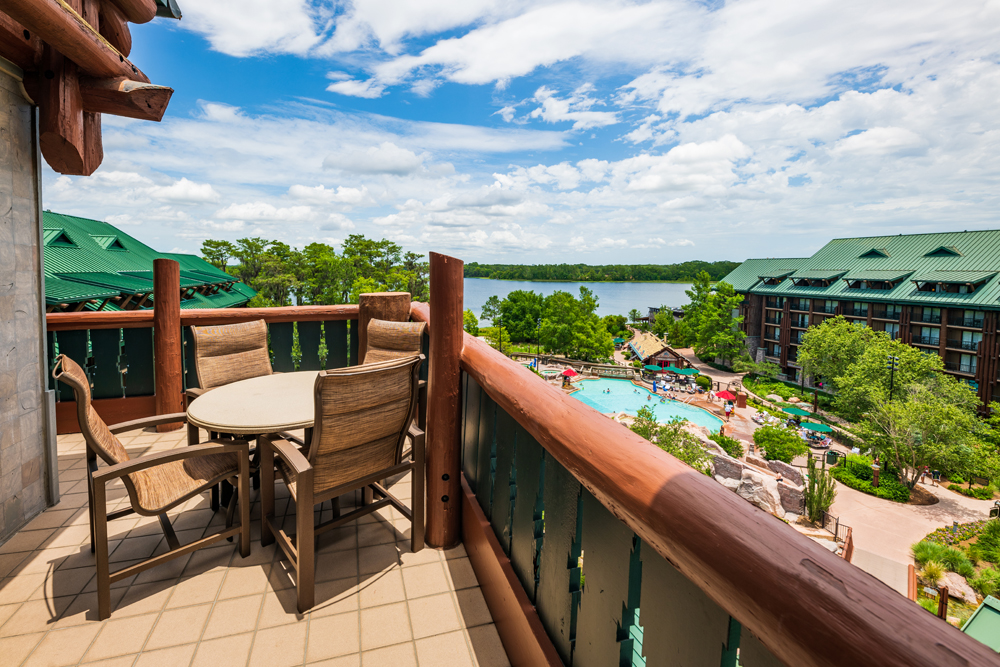 Overall, the Yosemite Suite was everything I hoped it would be and more. To my immense relief, it not only maintains its thematic integrity, but somehow manages to look better than it did when Wilderness Lodge first opened. With recent room reimaginings stripping away theme in favor of generic luxury, this actually came as a surprise.

Our recent Wilderness Lodge Update & New Room Tour shows what could be on the horizon for a room reimagining at this stunning themed resort. I can only hope Yosemite Suite is left along; maybe my bringing “awareness” to this superlative suite will cause those who value theme to book the suite and give positive feedback on its design. (A reach, but hey, I can dream.)

While we didn’t get to stay in the Yosemite Suite overnight to fully appreciate its details, we also didn’t have to pay to stay overnight in it, so I’m content with our brief taste of the suite. I’ll always have these photos, videos, and the memory of being there. It’s my new favorite room at Walt Disney World…at least until I have a chance to see the Yellowstone Suite at Wilderness Lodge!

What do you think of the Yosemite Suite at Wilderness Lodge? Would you likewise rank this among the best hotel rooms at Walt Disney World, or is it not to your tastes? Glad to see the original design has largely been preserved? Do you agree or disagree with our assessment? Any questions we can help you answer? Hearing your feedback–even when you disagree with us–is both interesting to us and helpful to other readers, so please share your thoughts below in the comments!