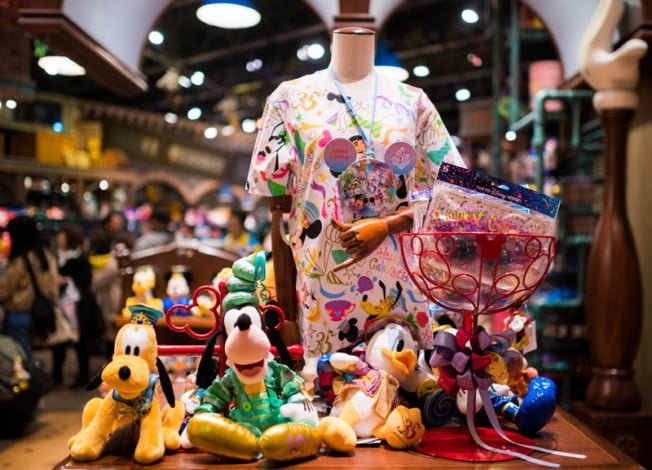 Tokyo Disneyland’s 35th Anniversary, the Happiest Celebration!, begins April 15, 2018, but the resort has released its slate of merchandise and souvenirs in advance. In this post, we’ll share photos and thoughts on the designs available through the end of the anniversary in March 2019.

If you read our relatively-recent “Tokyo Disneyland Merchandise: Awful or Awesome?” post, you might recall that we aren’t generally the biggest fans of Tokyo Disney Resort merchandise. While things have been improving the last couple of years, the vast majority of designs have been vibrant and character-driven. The type of loud designs we wouldn’t feel comfortable wearing outside of a Disney theme park.

The good news from that perspective is that Tokyo Disneyland’s 35th Anniversary has two different lines. There’s the normal, colorful items featuring the “Happiest Celebration!” logo, plus an assortment of the Fab Five characters in their special costumes for the celebration. We’ll share photos of this merch below, but by and large, it doesn’t appeal to me. Then there’s what I’m going to call the cool line…

This other line is actually known as “35 Years of Memories” and it’s probably more geeky than it is cool. (If anything, people that are hipper than us wear those boisterous character items.) This product line features nostalgia-driven artwork of Mickey and other iconography throughout the history of Tokyo Disneyland.

Anyway, let’s start with a look at different items from the Happiest Celebration line… 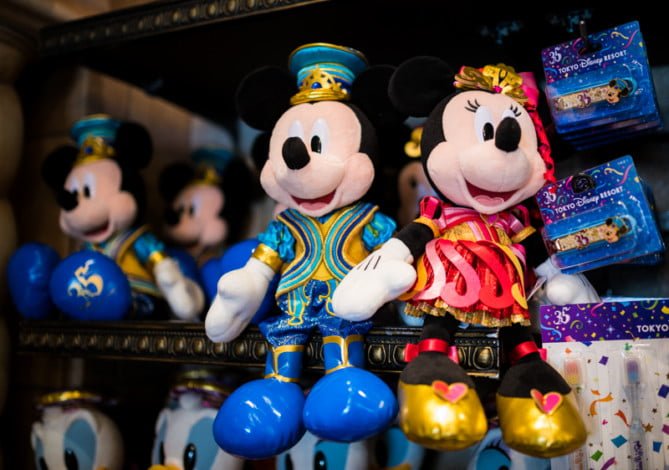 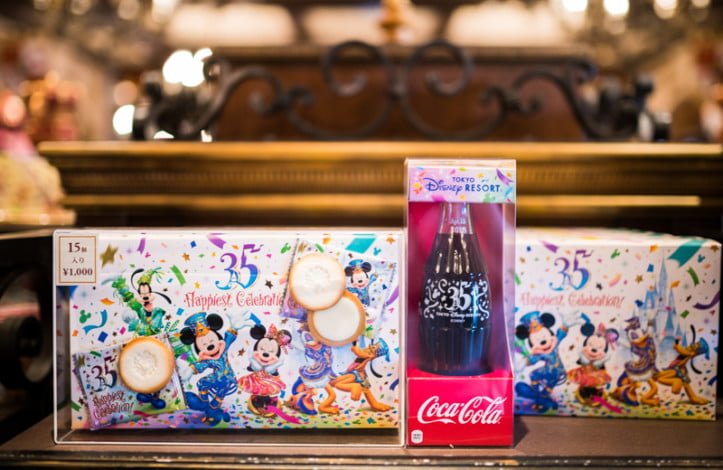 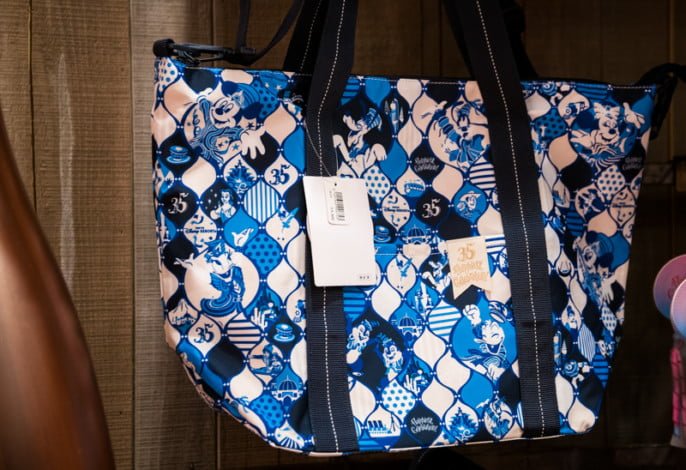 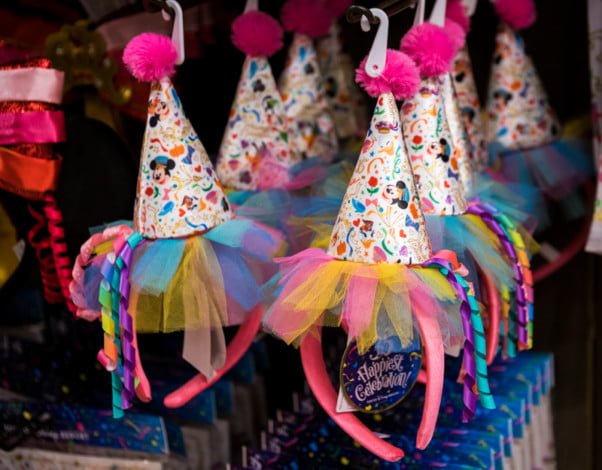 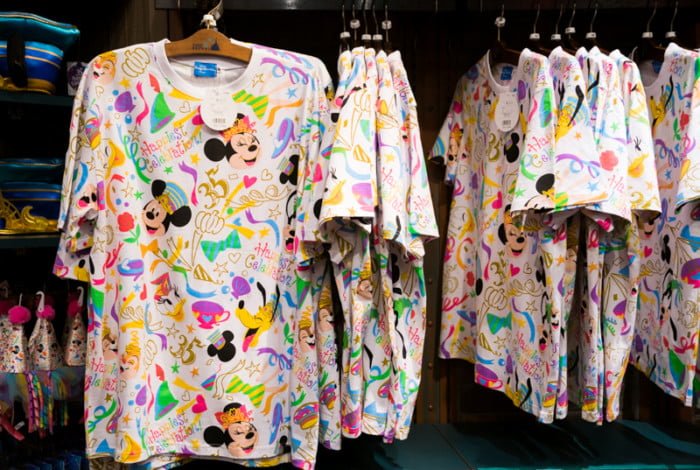 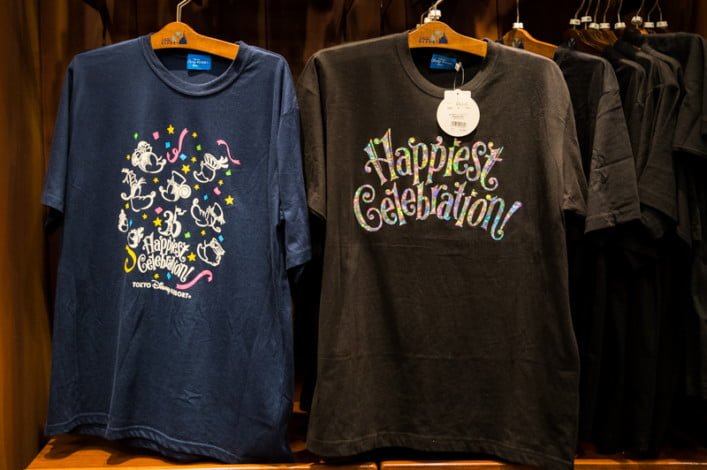 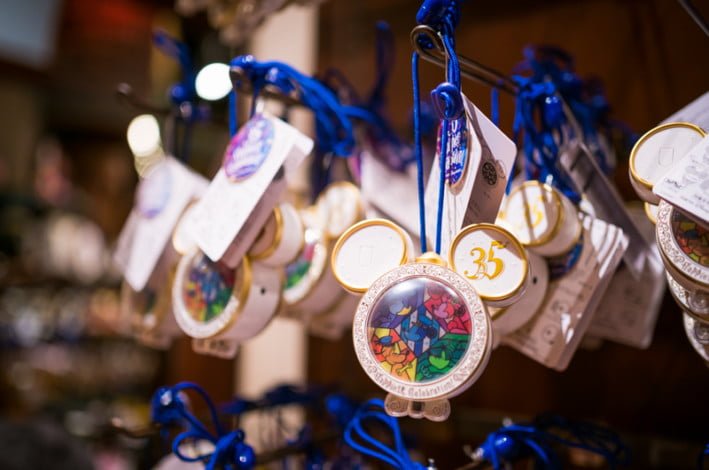 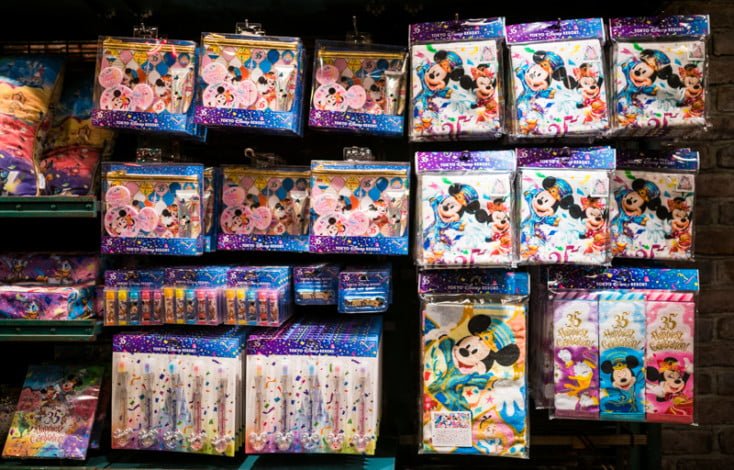 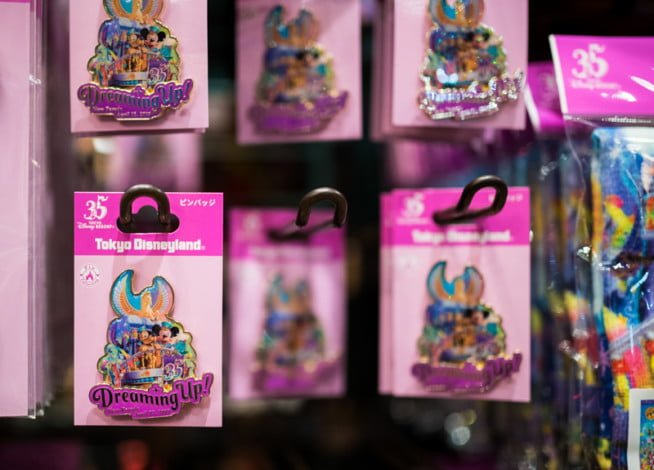 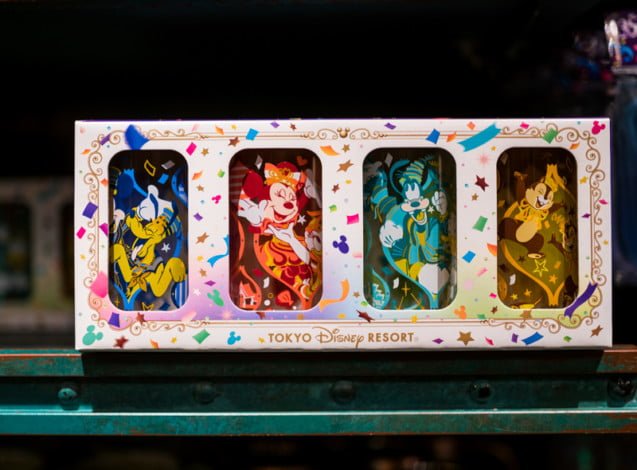 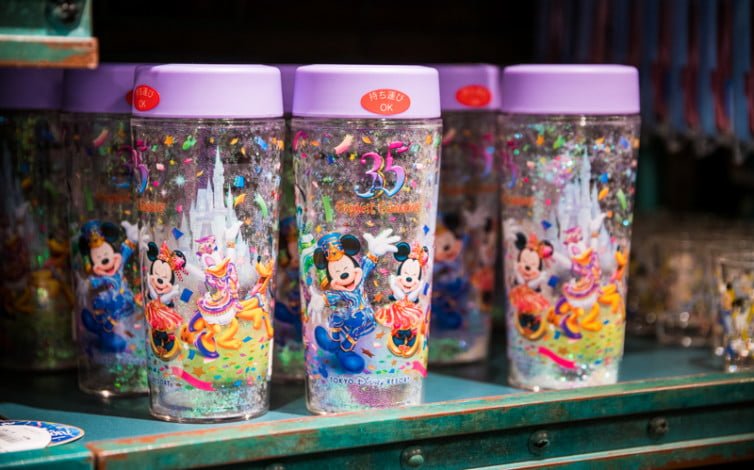 I think this merchandise is a bit of a mixed bag. On the one hand, the vibrant designs featuring confetti and ‘birthday cake’ colors are fun and feel very appropriate for spring. I actually like a decent amount of this stuff, including the set of 4 glasses, and other (mostly) household goods.

On the other hand, the character designs remind me a lot of Tokyo DisneySea’s 15th Anniversary, to the point that if you showed me two character pluses or other character-heavy items side by side, I might be hard-pressed to tell which is from which celebration.

While I like the character costumes, which feel like 1990s meets steampunk meets Art Nouveau, the styles and color schemes are way too similar to what was used during the Year of Wishes at Tokyo DisneySea. If you know me, you know

I’m a total sucker for novelty hats, but when I looked at the one on sale for this event, I felt like I already own a trimmer version of the same basic style. Then again, none of this stuff is entirely my cup of tea, so perhaps I’m not the best judge of it. 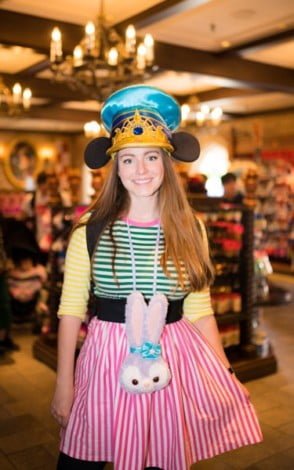 Sarah, on the other hand, is a huge fan of a lot of these items. She bought several things, including the confetti/white t-shirt, novelty hat, and a bunch of stuff I probably never even saw. With regard to the white t-shirt, I do have to admit that for what it is (Tokyo Disneyland’s ‘typical’ character pattern shirts), it’s a pretty rad design. Not something I’d feel comfortable wearing, but cool nonetheless. 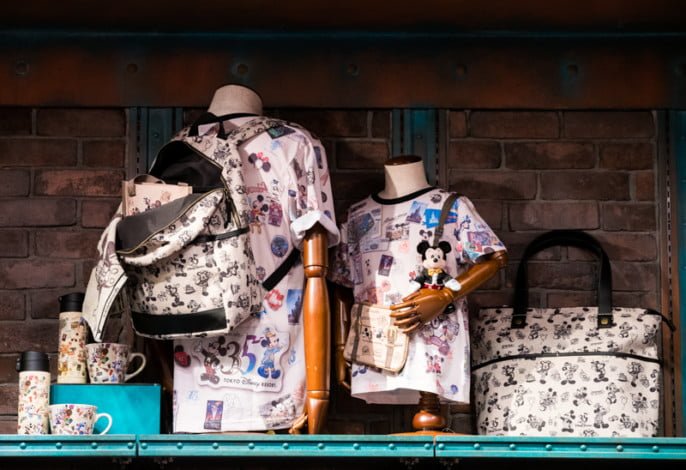 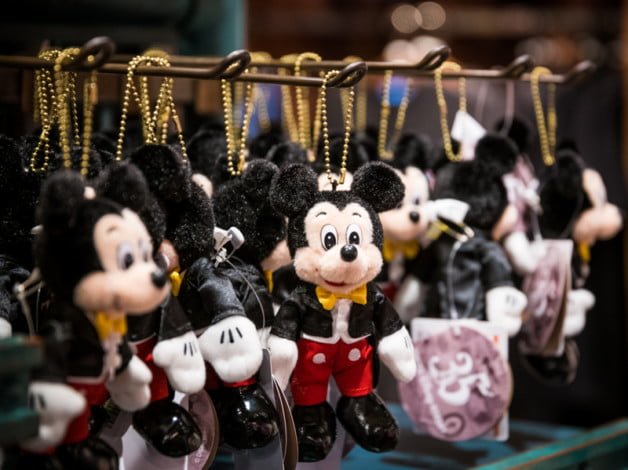 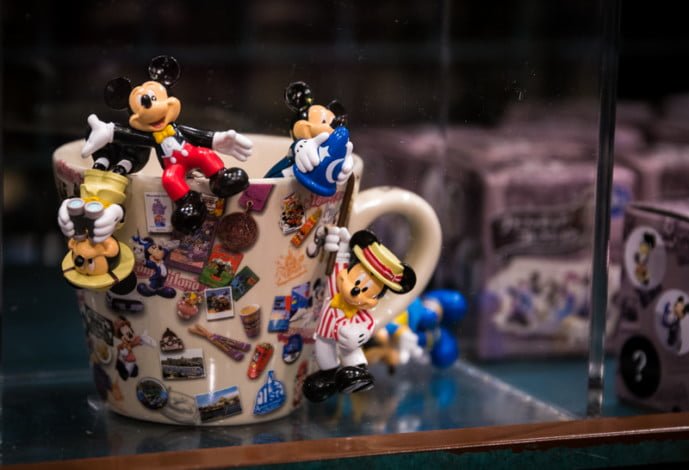 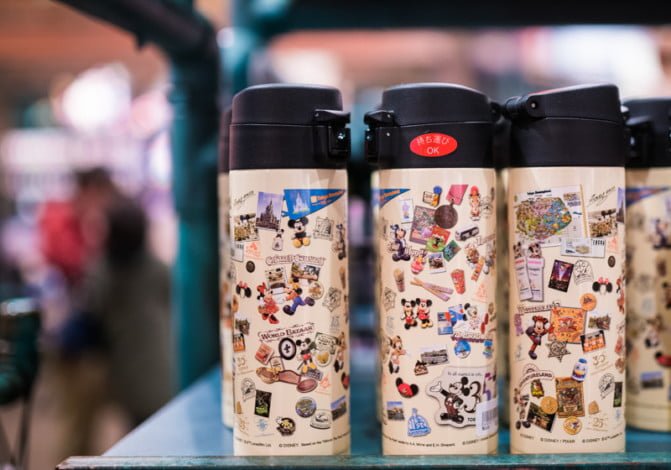 These items are much more to my taste. Not only is the color palette predominately neutral and the artwork much more subdued, but the graphics pull from the various lands at Tokyo Disneyland, and past anniversary celebrations. I like the direction where they’re headed with this stuff.

A lot of these items still aren’t quite there for me. These pieces feel like busy collections of clipart, without anything to anchor the designs. Don’t get me wrong, I think this is a huge step in the right direction, but most of it is too busy for me. Nonetheless, we liked several of these items and wanted to ‘vote with our wallets’ in support of this merchandise line, so we bought the coffee cup, camera strap, button.

What I’d like to see going forward is individual pieces of the clipart in this line made the centerpiece of new designs. For example, if Tokyo Disneyland released a shirt with a classic pennant on it that said “Tokyo Disneyland” or a line of shirts each with a classic land logo, I’d buy them all. Shut up and take my money, as the kids say.

One thing that’s reassuring (beyond the existence of this line in the first place) is design and fashion trends in Japan, as a whole. Whereas styles skewed more towards the colorful line a few years ago, it’s exceedingly rare to see that now. Retro is the rage, with everything from the 1960s to 1990s being popular. We’ve seen an embrace of retro merchandise in the United States parks for a while now, and I think it’s only a matter of time until similar things spread to Tokyo Disney Resort.

Ultimately, as excited as I am for Tokyo Disneyland to continue this trajectory of better merchandise, part of me is fearful for it. We spent more money than ever before on our last trip to purchase the Country Bear Christmas plushes, land magnets, and Tokyo Disneyland and Tokyo DisneySea logo shirts. This trip, we’ve spotted even better merchandise and bought even more…and this is still with only <10% of the merchandise appealing to us. I’m not sure whether I’m financially prepared to live in a world where I like most of Tokyo Disney Resort’s merchandise. Although, they do say nothing is a better long-term investment than Disney merchandise! (Someone does say that…right? 😉 )

What do you think of this Tokyo Disneyland 35th Anniversary merchandise? Do you agree with my tepid take, or Sarah’s enthusiastic one? Any questions? Hearing feedback about your experiences is both interesting to us and helpful to other readers, so please share your thoughts below in the comments!