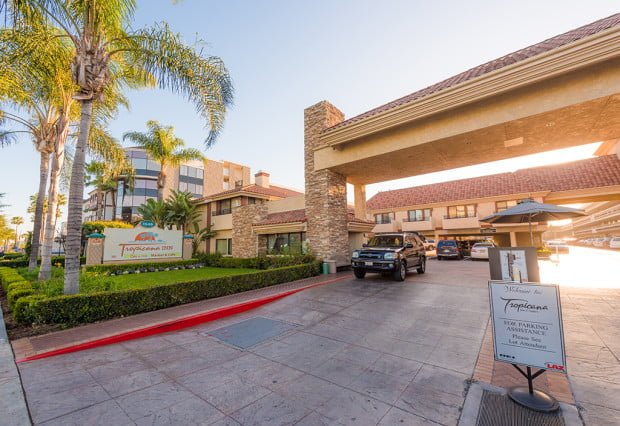 Tropicana Inn & Suites is a Disneyland Good Neighbor Hotel across the street from Disney California Adventure and Disneyland’s Esplanade. This review features photos of the hotel, how it compares to other accommodations across the street from the parks, and thoughts about our experience of staying here. This hotel is best categorized as a budget hotel/motel, like many of the hotels on Harbor Boulevard near the front gates.

Actually, calling it a budget hotel is a little dismissive. It’s nicer than a budget hotel and has solid rooms and a reasonable slate of amenities. It also compares favorably with other similarly-situated hotels on Harbor Boulevard that are about the same distance from Disneyland. It’s certainly not the Waldorf Astoria, but for what it is, it’s a solid option, as you’ll see.

Truthfully, Tropicana Inn does have a fair amount of history that makes it a great place to stay. It was actually where Darwin and Clarence “Doc” Tropicana launched the world’s first juice stand back in 1834–at the time they served only prune juice!–that eventually grew into the world famous Tropicana Orange Juice Co. Actually, that isn’t ‘truthful’ at all; I have no clue what the history behind this hotel is, but I’m going to go ahead and assume it has something to do with orange juice.

Tropicana Inn & Suites is one of the 39 Disneyland Good Neighbor Hotels, which is frankly a bit of a meaningless distinction as some truly crumby hotels are “Good Neighbors” and all having that status gets you is the ability to book a vacation package with an inflated room rate. Whoop-dee-frickin-doo. (In case you cannot tell, we think Good Neighbor status is meaningless.)

You can get an idea of how Tropicana Inn & Suites stacks up to the competition in our Disneyland Hotels Reviews & Rankings post. Get an idea of our overall comparison of the benefits of staying off-site versus on-site in our Where to Stay at Disneyland post.

So what are the pros and cons of staying at Tropicana Inn & Suites? Let’s take a look… 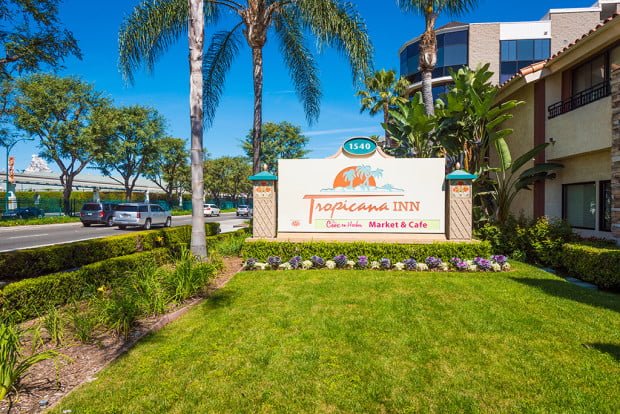 First up is the amenities. Technically, I suppose location isn’t an amenity, but whatever. If you look at the photo above, you’ll see that the Matterhorn is across the street from and behind Tropicana Inn. The hotel itself is almost directly across from the Esplanade.

Without a doubt, this is Tropicana Inn’s greatest selling point. As with all of the hotels “across the street” from Disneyland, you are paying a premium for the incredibly convenient location. If location does not matter to you, look elsewhere. With that said…location absolutely should matter to you, as the convenience cannot be overstated.

Tropicana Inn & Suites is close enough that you can take a midday nap without worrying about losing any time for the commute. One thing I really like about the hotels in this strip is that they are effectively lockers. I can be looking at Sleeping Beauty Castle, head back to the hotel in the early evening to grab my jacket and tripod, and be back on Main Street again all in the span of under 30 minutes. 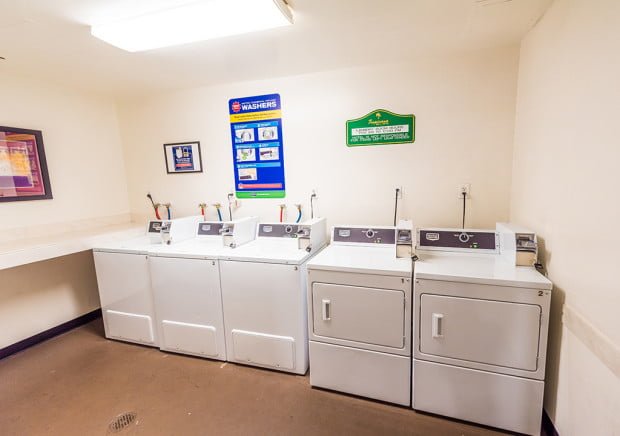 In terms of things that would actually be considered amenities, there’s on-site guest laundry… 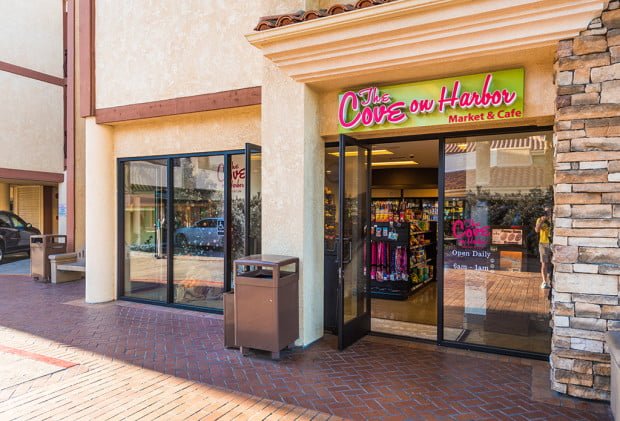 The Cove on Harbor Market & Cafe is a convenience store across from the lobby.

While somewhat overpriced, this store has a large selection, including in terms of beer & alcohol. If you’re planning on doing some day-drinking at Disney California Adventure, stopping here for some pre-gaming fluids might be a nice, money-saving option. 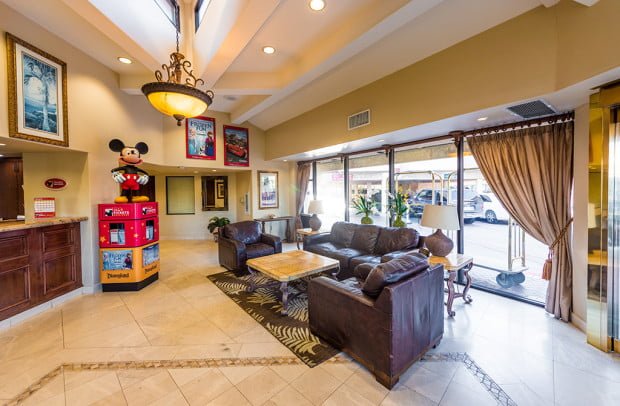 Some couches in the lobby for those times when you just want to “chillax”, as the kids these days say, and watch the traffic pass by on scenic Harbor Boulevard… 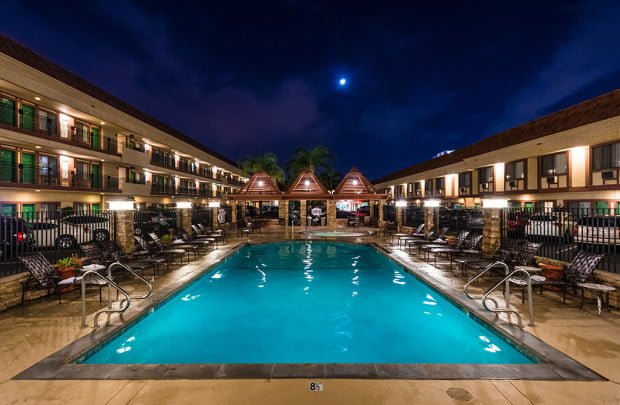 There’s also a decent pool. I’d say it’s slightly nicer than the average for pools at the Harbor Boulevard hotels, but that really isn’t saying much.

It also seems larger than the norm for pools at hotels near Disneyland. It’s still very much a basic, utilitarian pool. 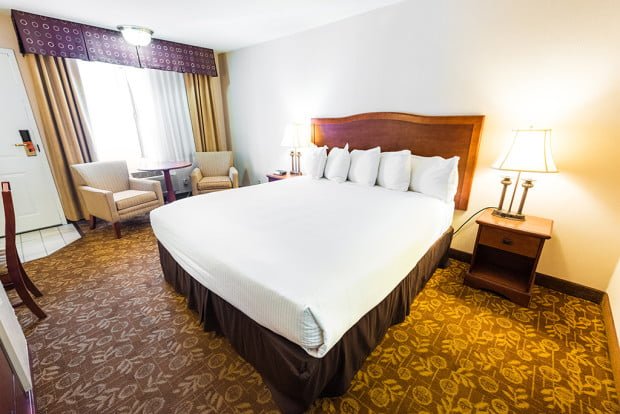 Now let’s take a look at the guest rooms. While it looks like a pretty ordinary room, that’s not necessarily a bad thing.

The bed had plenty of pillows that were above-average and while the bedding was very basic in terms of look, it was more comfortable than the average for other Harbor Boulevard hotels. On the whole, the rooms had a clean, crisp look to them that, while not exactly pushing the envelope in terms of contemporary design, also didn’t look dated. 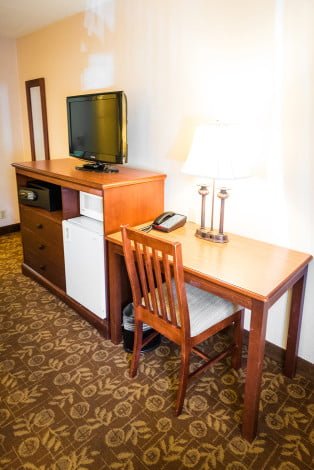 The rooms have a desk, mini-fridge, microwave, safe, and flat screen television. Definitely nice options if you want to prepare light meals in your room.

Also worth noting is that there’s an (overpriced) convenience store near the hotel. There’s also a McDonald’s about 1 minute away from Tropicana Inn and a Panera Bread immediately adjacent to that. This is a potential selling point if you want to grab a quick, expensive meal after a long day in the parks. 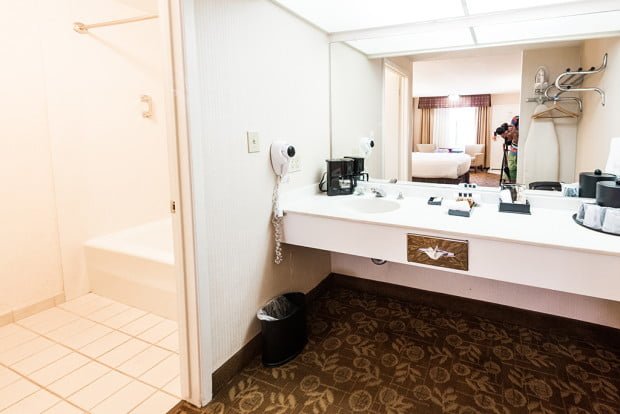 Bathroom is pretty standard stuff, too. Worth noting is that the coffee maker game here is weak, but the toiletry game is strong.

The bath soaps are “I Love…” Mango & Papaya. I had never heard of this brand before, but it was solid stuff and superior to garden variety toiletries. 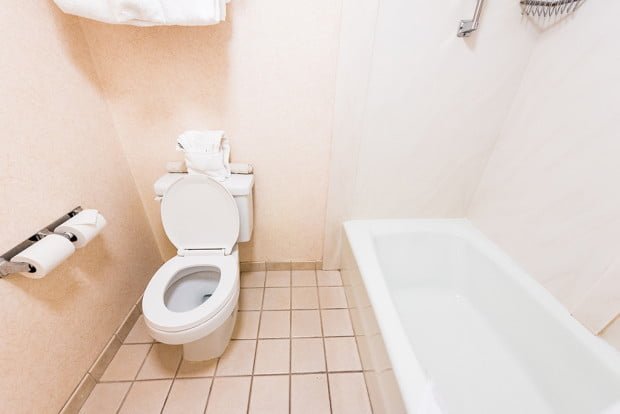 Pretty average bathroom. This is par for the course in terms of Anaheim hotels.

Water pressure in the shower was fine, toilet worked fine, towels weren’t scratchy…it all checked out. 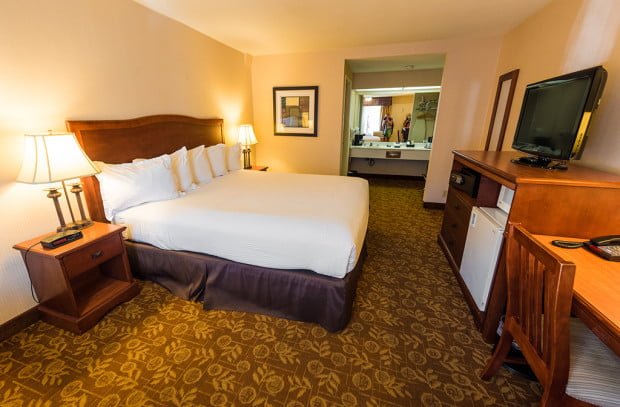 The style was pretty bland–probably by design–making it tough to tell how long it has been since the last refurbishment. It either hasn’t been too long, or Tropicana Inn does a good job of maintenance. Either way, Tropicana Inn deserves some kudos, as many of the hotels adjacent to it do not look this nice.

It’s also worth noting that as of Summer 2017, the rooms have once again been refreshed. We’ve heard from a couple of readers who have stayed here since this refurbishment was completed, and they found the rooms to be even nicer than what we reported. (We’ll do a return stay at Tropicana Inn & Suites and update this review once we have a chance!) 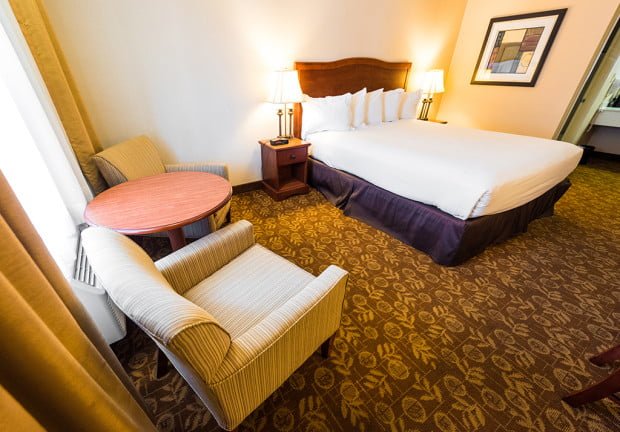 If you’re feeling a bit of sticker shock, just keep in mind that the prices are inflated for all hotels near the parks now. Many of the hotels in this area have doubled in price over the course of the last 5 years. (We call this the “Cars Land Bump” and it has not stopped since that land opened.)

Overall, I think Tropicana Inn & Suites compares favorably to the other hotels to which it is adjacent on Harbor Boulevard. Aside from the location, the rooms are fairly nice and spacious as compared to other hotels across the street from Disneyland. You’re unlikely to have a negative experience with a disappointing or dirty room, but you’re also unlikely to have a standout experience with a room or amenities that blow you away. It is, quite simply, a solid hotel at fair price relative to other hotels that are this close to the parks. That’s pretty much a best-case scenario for these hotels that are so close to the front gates, and I’d put Tropicana Inn & Suites near the top of your ‘list’ if being a short walk from Disneyland and Disney California Adventure is your top consideration–it’s really tough to beat this location!

Get discounted pricing on a Disneyland vacation package that includes your stay at Tropicana Inn & Suites and Disneyland park tickets via Get Away Today. We always recommend them to save money on Disneyland tickets, and this is a great way to get an even better deal by purchasing a bundle that includes hotel and tickets. Click here to price out your dates!

Have you stayed at the Tropicana Inn & Suites? Did you enjoy your stay? What do you think are the pros & cons of Tropicana Inn? Considering this hotel? Do you prefer staying off-site or on-site at Disneyland? Any questions? Hearing your feedback about your experiences is both interesting to us and helpful to other readers, so please share your thoughts or questions below in the comments!