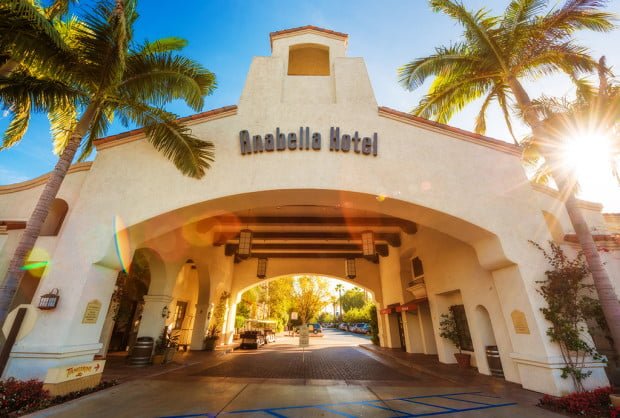 I’m a big fan of The Anabella. That’s right, The Anabella. Self-important “The” in the name aside (which always reminds me of dreaded Buckeyes fans), Anabella Hotel is an excellent option for a visit to Disneyland, especially if you intend upon spending some time at your hotel. The Anabella has nice rooms, solid amenities, and a certain “local” allure to it.

One thing that perplexes me about Anabella Hotel is its poor performance on TripAdvisor. It currently ranks as the #47 hotel in Anaheim with a 3.5 score. This puts it ahead of countless other hotels that are far inferior to it, including a few that I’d consider downright shady. I’ve said in the past that I don’t put a ton of stock in TripAdvisor for various reasons, and this is part of the reason why.

The best that I can surmise is it’s about expectations. Take a look at Anabella Hotel’s website. Now take a look at the website of Alpine Inn, the #12 hotel per TripAdvisor. There’s nothing necessarily wrong with Alpine Inn’s site (well, aside from the SpectroMagic and other Walt Disney World photos), it’s just much more modest by comparison, coming across as a family-run “inn.” Anabella has a pretty site with flashy photos and describes itself as a “peaceful oasis,” “tropical paradise,” and having “elegant accommodations.” Perhaps this leads to guests having expectations that the Anabella does not meet?

I’m not sure, but I am sure that Anabella Inn is a substantially better hotel than Alpine Inn, despite both being comparably priced and in similar locations. Aside from us getting really lucky or others getting really unlucky with the Anabella, that’s about the only explanation I have. From an objective perspective, the Anabella has a solid list of amenities and the rooms have quality finishings, so that’s not the issue. Subjectively, perhaps it’s a matter of inconsistent service or cleanliness?

In any case, trying to, essentially, review the reviews of others is a fool’s errand, so let’s just stick to what I think of Anabella Hotel… 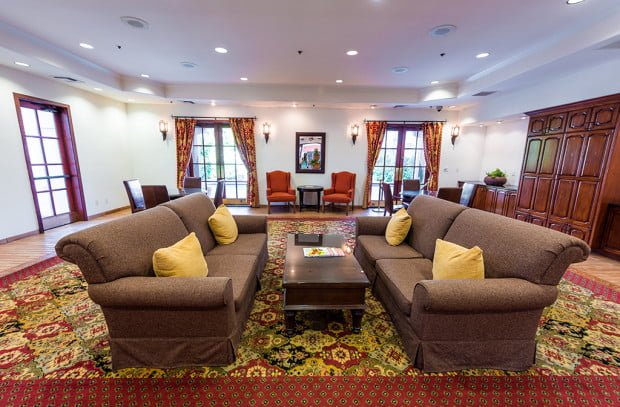 For starters, The Anabella Hotel is a Disneyland Good Neighbor Hotels, and is classified by Disney as a “Moderate,” which is pretty much how every off-site hotel is classified. You can get an idea of how it stacks up to the competition, plus our overall comparison of the benefits of staying off-site versus on-site in our Where to Stay at Disneyland post. 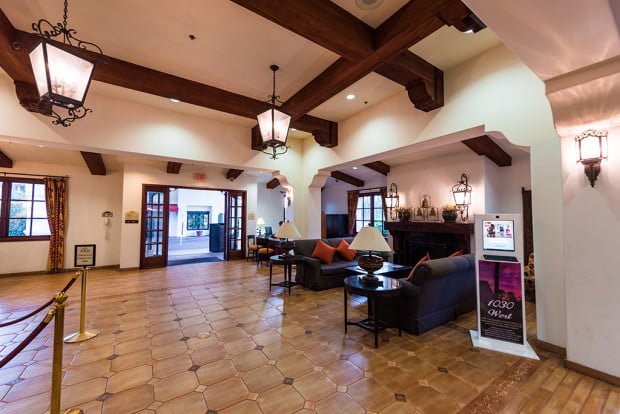 We stayed here for the first time during the last D23 Expo, and it was pretty much the perfect hotel for that event. It’s a moderate walk–about 15 minutes–to Disneyland from the Anabella, but it’s closer to the parks than the Convention Way hotels (especially if you cut through the Grand Californian). It’s also about a 5-minute walk to the Convention Center, which makes it ideally located if you’re heading to both the Convention Center and the parks. 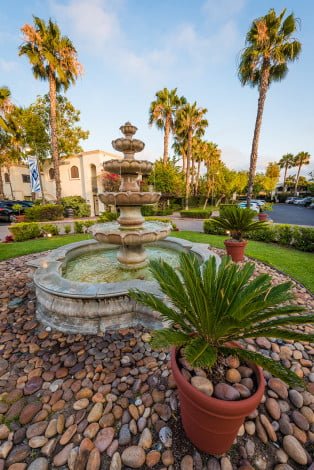 In terms of amenities, Anabella Hotel skews more towards the major hotel brands near the Anaheim Convention Center than it does the mom & pop hotels in the area. It has a quiet pool and a regular pool (that’s actually fairly nice), a workout room, gift shop, business center, salon & spa, guest laundry, and restaurant & bar. 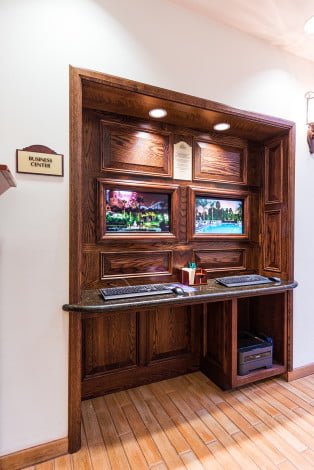 Now, some of these amenities aren’t exactly impressive–like the “business center” pictured above or the on-site shop–as compared to the major brands, but others hold their own. The poolside bar and restaurant is reasonably popular, the fitness center is good, and the pool area is an enjoyable area to relax. These amenities, as a whole, probably fall somewhere between the mom & pop hotels and the major chains. 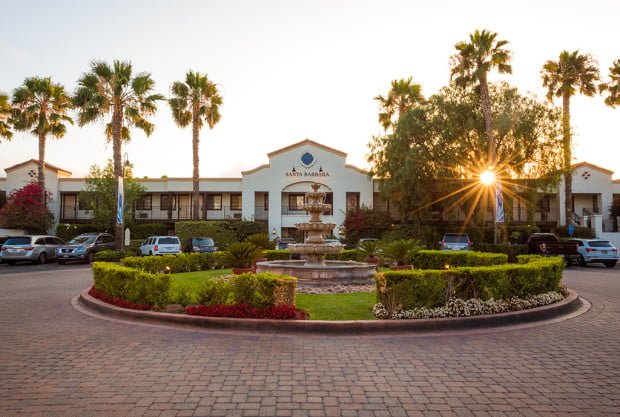 The local flair is largely a result of its California Mission style and little ‘villages’ that are named after areas of California. This coupled with manicured landscaping, brick pavers, and an abundance of flowers makes the hotel feel like a lightly-themed resort. It reminds me of a low-budget Coronado Springs Resort, actually. 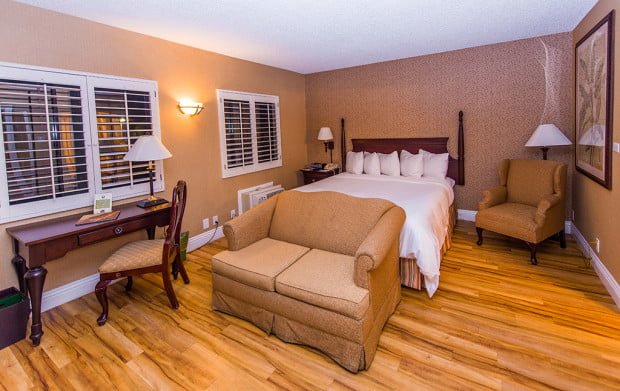 Moving on to the guest rooms, I think these are put together well for the most part. They have actual furniture like a couch and a chair so you can sit (besides on the bed) and decompress after a day in the park. I also think the hardwood (laminate?) floor is a nice touch, and gives the room a classy vibe. The Anabella touts the rooms as having upscale amenities and designer furnishings, and while I don’t think they quite pass as trendy, they are high quality.

Like virtually every hotel that fancies itself as…fancy…The Anabella Hotel has a trademark “sleep experience,” known as Divineâ„¢. I have no clue what a sleep experience is (dreaming?), but the bedding is incredibly comfortable, resulting in Tom’s Truly Epic REM Adventureâ„¢ during our stay here. I get that bedding is important, but it baffles me that hotels go to such extremes to hype it up. I assume people know hotel claims are puffery, and if a prospective guest really cares about bedding, they will look to reviews, and not just take the hotel at its word. Right? 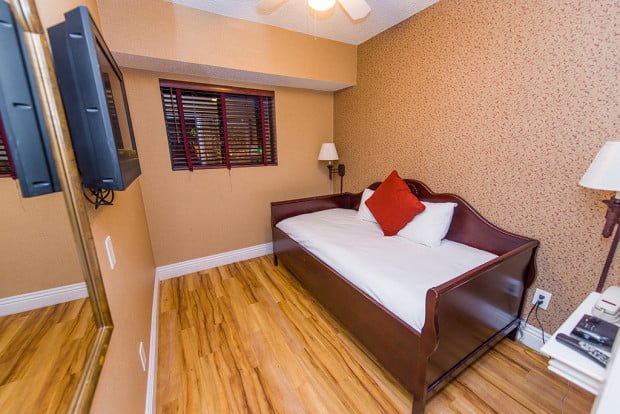 It’s hard to get a sense of this space, but it’s like a little bedroom/nook off to the side of the main sleeping area with another bed (or uncomfortable couch). This space is well-utilized given its small size, but it’s ultimately awkward for actually watching sitting and watching television. I believe this room is called the Casita Suite and while the extra space is good to have, and it’s really no loss if you don’t end up in one of these rooms. 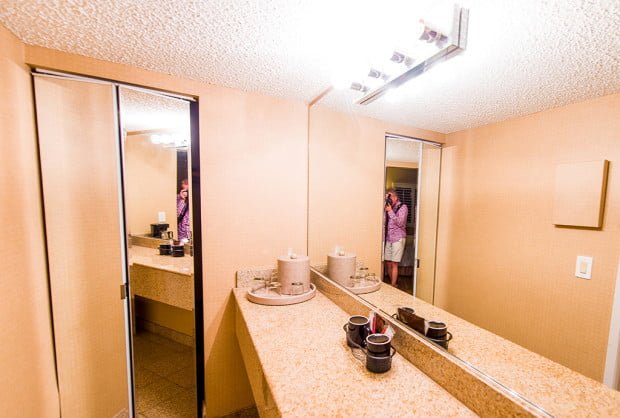 The bathrooms are a bit of a mixed bag. I’m seldom impressed by the bathrooms at any of the hotels in Anaheim, as they are mostly variations of the same underwhelming thing, but this is actually different. Here, different is not necessarily better, but it’s not worse, either. 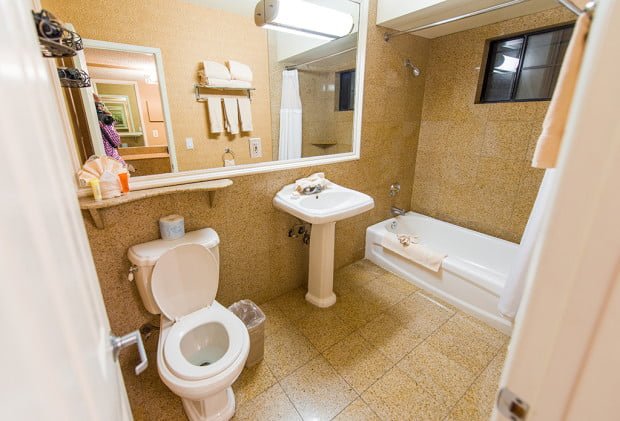 There are two areas to the bathroom, and while larger than the norm, it feels like the space is not utilized effectively. We felt cramped at times while both of us were getting ready. I will say that the granite in here is a nice touch.

Rack rates at the Anabella range from around $120/night to $200/night, depending upon season. The lower range here seems more or less fair, and you can get a suite that will sleep more people for about the same price. The $16/night parking charge and the $5 resort fee are the biggest downside to this. The resort fee is annoying, but at least it’s only $5, and the Anabella does at least have some resort-quality amenities. However, it’s the parking fee that’s really frustrating, as the Anabella has ample space and plenty of parking. There’s no need for them to charge for parking, especially when hotels having smaller footprints on Harbor Boulevard don’t. 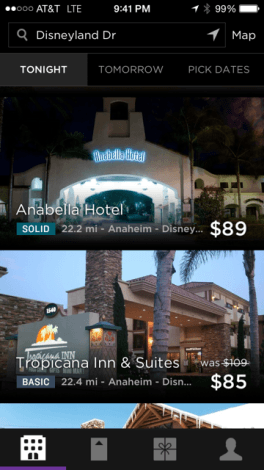 The Anabella Hotel is on Hotel Tonight with regularity–probably around 90% of the time or more if you look 2+ days in advance–with rates ranging from around $90 to $140/night on there. Even with the added charge for parking, it’s a steal at <$100. If you are comfortable winging it a bit and don’t mind potentially staying at a different hotel near Disneyland, like Park Vue Inn, Tropicana Inn & Suites, or Castle Inn, I highly recommend waiting and using Hotel Tonight to book. You can book via Hotel Tonight up to a week in advance, but the Anabella is one of the hotels that will reduce its rates the day before or day of, so you can save even more by waiting.

Use code TBRICKER1 to save $25 on your first booking via Hotel Tonight. 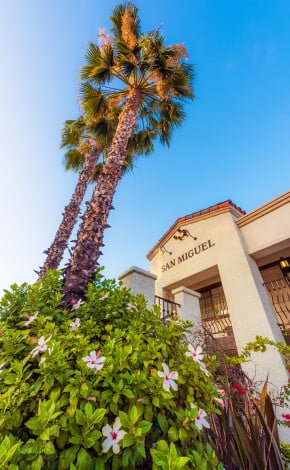 Overall, The Anabella Hotel really appeals to me for some of the same reasons that I like Park Vue Inn a lot. It takes the California Mission style of Park Vue Inn to the next level, with pretty grounds and little “villages” named after areas of California. Beyond that, the rooms are nice and the amenities offered here are very good. Too big to be properly considered a boutique hotel, The Anabella Hotel nonetheless offers the Southern Californian charm only found at a local hotel, while providing nearly the level of quality as the major hotel brands near the Anaheim Convention Center.

Have you stayed at The Anabella Hotel near the Anaheim Convention Center? Did you enjoy your stay? Did you enjoy being nickel and dimed? What did you think of the guest rooms? Considering this hotel? Do you prefer staying off-site or on-site at Disneyland? Please share your thoughts or questions in the comments section below!