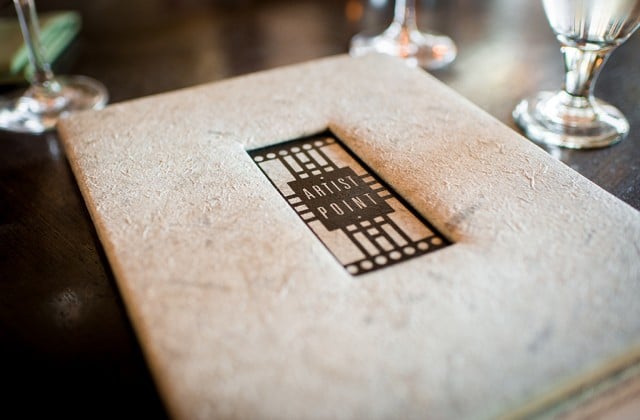 Artist Point is a Signature Restaurant at Walt Disney World’s Wilderness Lodge. In this dining review, we’ll share food photos from our meal here, and weigh the pros and cons of this Pacific Northwestern restaurant. The Artist Point menu has a lot of seafood, game, and other dishes you might expect to find in a Pacific Northwest steakhouse, but prepared with a refined twist. In this sense, Artist Point is unlike both a normal steakhouse, and also unlike a trendy restaurant serving haute cuisine.

It’s somewhere between the two (probably much closer to the steakhouse). As mentioned, it’s a Signature Restaurant, meaning that it costs 2 credits on the Disney Dining Plan. We recommend paying out of pocket when dining here, as this restaurant is not a good value on the Disney Dining Plan because it requires two credits. It does accept Tables in Wonderland for a 20% discount.

The theming at Artist Point isn’t exactly what you might expect from a Signature Restaurant, either. Disney describes it as “rustic elegance,” and I think that’s about the most apt way to describe it, rather than just marketing-speak. Really, there’s a lot to love about Artist Point. I think it’s probably the unheralded Signature Restaurant at Walt Disney World…

This starts with the dining room, which is cavernous yet elegant. The murals, paintings, and fixtures throughout the dining room are all gorgeous, but they portray the beauty of the National Parks and the American frontier. Not exactly what you’d expect from normal fine dining, but beautiful nonetheless.

In terms of general feel, it reminded me a lot of the well-appointed Ahwahnee Dining Room. Much like the Ahwahnee, Artist Point offers great views out into the “nature” of Wilderness Lodge, with views of Bay Lake and the falls at Wilderness Lodge. 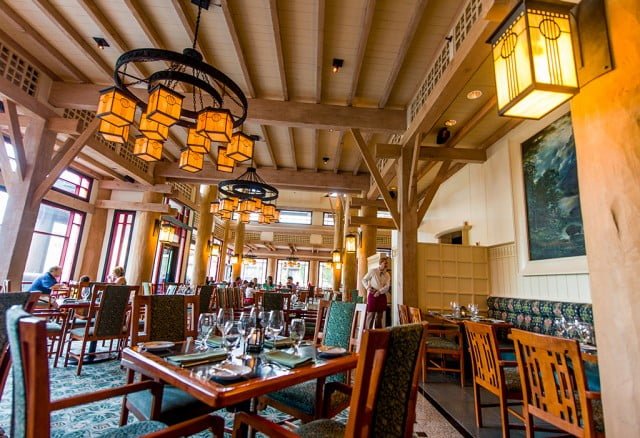 By no means do I think this is a bad thing–the look of Artist Point is right up my alley. The big reason why we tried Artist Point after passing on it for so many years was because I recently visited Yosemite National Park and hiked to the actual Artist Point (which I’m told is the basis for the restaurant’s name).

Although it’s hardly a deal-breaker, I was a bit disappointed that there were no murals or paintings of the view from Artist Point (at least that I saw), which is one of the most stunning views in Yosemite. Artist Point management, if you’re reading this, you’re welcome to use this photo in your restaurant. I call it, “Strategically-placed Antler on a Rock at Artist Point Just After Sunrise.” Pretty catchy title, right? It’d look nice in the restroom.

Artist Point was actually the last Signature Restaurant to cross off our “list” (if you don’t count the 2-credit character meals) despite having a theme that strongly appealed to me. This is because we have heard a lot of mixed reviews of the place over the years.

Usually, these were just in the form of people telling us they liked it or disliked it without much in the way of support. Besides Yelp and Travelocity, there really aren’t many reviews of Artist Point out there. It definitely doesn’t have the same buzz as the other Signature Restaurants, but that doesn’t mean much…I think most aspects of Wilderness Lodge are underrated. 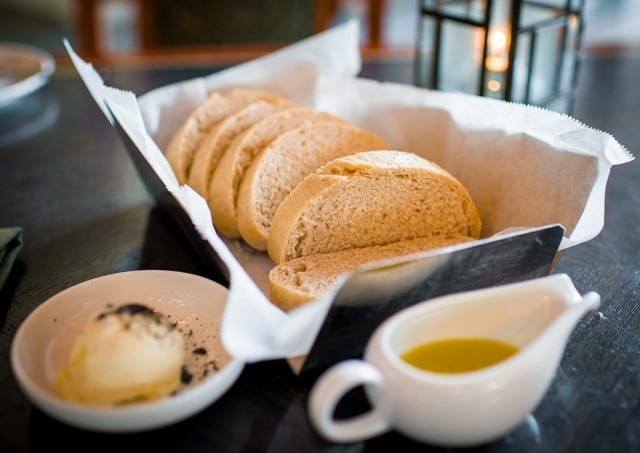 Our meal started with bread service, which was really good (in general, I think the bread service at Walt Disney World restaurants is usually pretty solid). The bread itself was fairly standard, but the butter was the standout here. 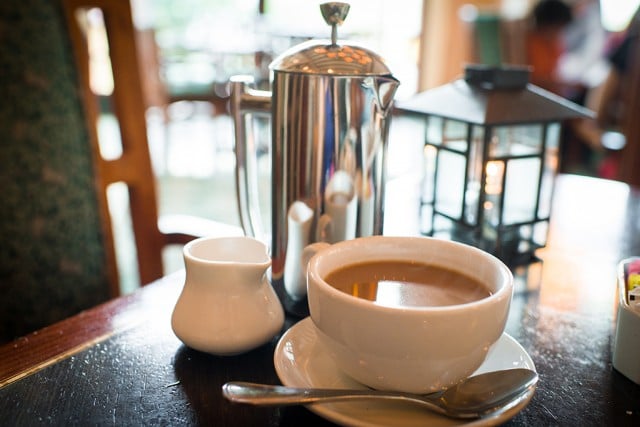 I ordered a plain ‘ole Coke to drink (which tasted like plain ‘ole Coke, for those curious), while Sarah tried the French Press Coffee. Artist Point is said to have a great wine list, but we know nothing about wine, so it would have been wasted on us. (Can anyone else comment on this?)

I know people rave about Kona Cafe having the best coffee at Walt Disney World, but we both thought this coffee was superior. Certainly a sharp contrast to what you’ll find in the parks! (At least during the Nescafe era.) 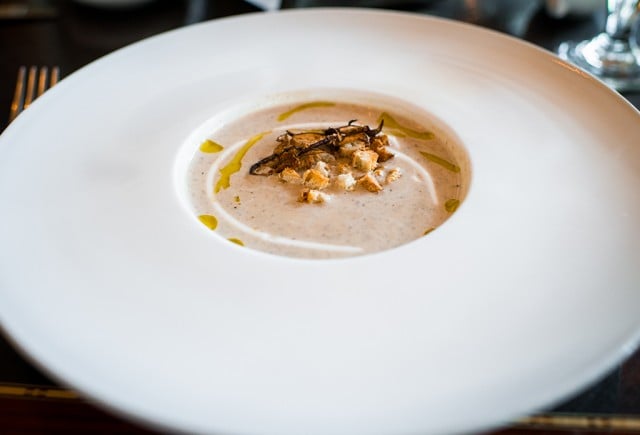 Not really knowing what to try, I started out the meal with Smokey Portobello Soup. Sarah wasn’t too hungry so she didn’t order an appetizer (I wish she would’ve tried the Confit Natural Bacon, as it looked great!). I don’t normally order soup, so I was a bit reluctant to order it here, especially with the $10 price, but I’m a sucker for mushrooms, so when our waiter recommended it, I took the plunge.

Don’t be fooled by the look of the soup in the photo here–it’s incredible. It had an amazing layered texture and incredible smokey mushroom flavor. I ended up soaking up every last bit of the soup with my bread. I just wish I could have ordered a larger portion. It was the highlight of the meal–and that’s not because the entrees and dessert were bad. The soup was just amazing! I would consider going back to Artist Point for that soup alone. 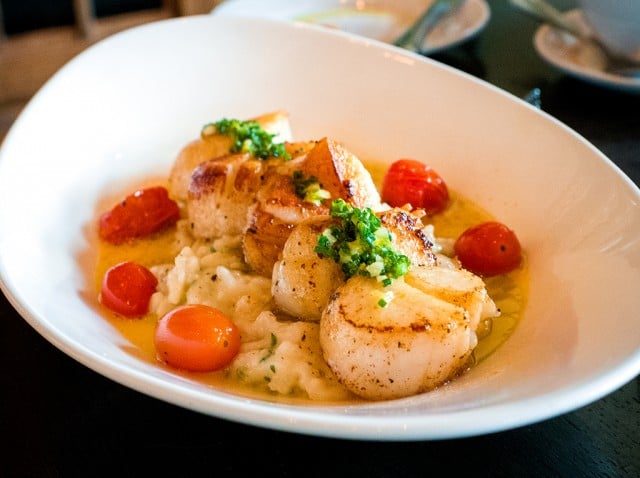 For our main courses, Sarah had the Seared Diver Scallops and I had the Slow-Roasted 64Â°C Buffalo Strip Steak. We both debated on getting the highly-recommended Cedar Plank-roasted King Salmon, but Sarah makes an excellent plank-roasted salmon, so we ultimately decided against it.

After seeing the fun table-side presentation and hearing positive things about it from other guests there, I think I’d order that on my next visit. Sarah’s scallops were good; large-sized, tender, and flavorful. The risotto on which they were served was also good and not too rich, but it just seemed a little uninspired of a choice to me. Overall, she liked the dish and thought it was a generous portion-size. 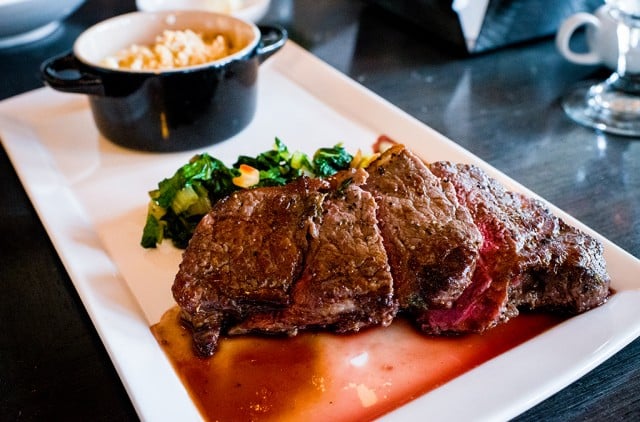 My Buffalo Strip Steak was pretty good, too. It had a good flavor to it, although it was a little tougher than I expected it to be (bison is typically leaner and tougher than beef, but this seemed a tad tougher than normal), but it was still good.

It was still good, but it didn’t wow me. 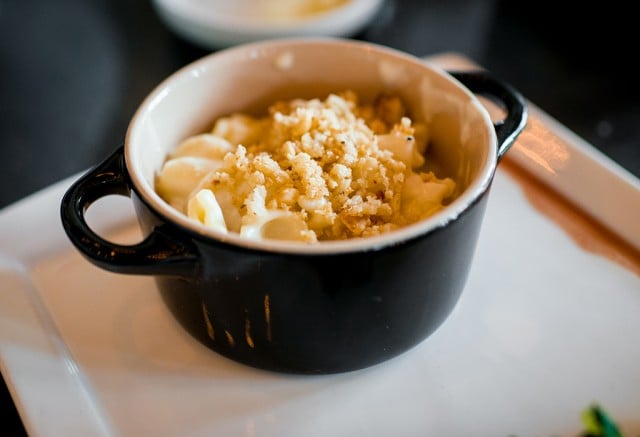 What did wow me was the truffle mac & cheese that was served as a side. I think I have a soft spot for truffle mac & cheese, but even so, this stuff was incredible. Rich, great texture, and outstanding flavor. I would have been satisfied if my meal were double servings of the soup and the mac & cheese!

We were pretty full after our entrees, but we felt obliged to have dessert…for the sake of you readers? (At least that’s what we tell ourselves…we’ll make up any excuse to “have” to eat dessert!) 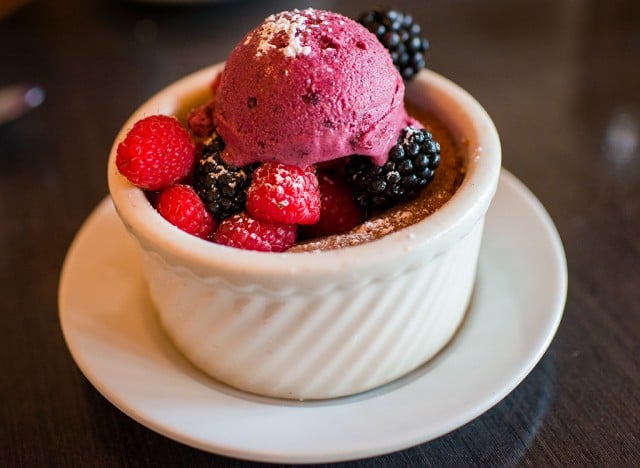 Our waiter recommended the Artist Point Cobbler, which did not disappoint. It had fresh berries and excellent house-made raspberry ice cream. This dessert was definitely “on-theme,” too, as it totally felt like something we could have ordered at the Ahwahnee Dining Room.

Overall, if you’re looking for a fine dining experience that prepares delicious seafood and game dishes in a setting that’s more rugged than what you’re likely to encounter elsewhere, we highly recommend Artist Point. The style definitely won’t be for everyone, but anyone who loves the theme of Wilderness Lodge is likely to love Artist Point, as well. It’s not at the very top of our list for its entrees (which were good, but not great), but all other elements of our meals were standouts and it’s a quiet restaurant with great food, a good theme (for us), and great views. Artist Point may not draw the rave reviews of other restaurants or have a cult following, but it does everything really well–well enough to sneak into our Top 10 Walt Disney World Restaurants list. It may not be as popular of a choice as some “big name” Walt Disney World restaurants like Le Cellier or California Grill, but it is an excellent choice for a romantic night in a beautiful setting. We’d go as far as to call it one of Walt Disney World’s unheralded dining gems.