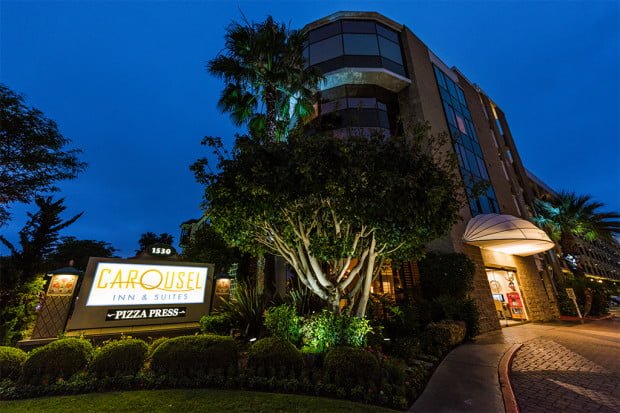 Carousel Inn & Suites is a Disneyland Good Neighbor Hotel that is right across the street from the Esplanade. This review includes photos of the hotel, plus thoughts about our experience of staying here. I’ll also touch on one of the most important “features” of Carousel Inn & Suites: the Pizza Press restaurant located on its premises.

Those of you who are Disney fans or live in Southern California might recognize the name of this hotel as being in the news recently: it was just purchased by Disneyland. That’s mostly immaterial to this review, but popular speculation suggests Carousel Inn & Suites is the future home to a pedestrian walkway connecting a (future) parking structure over Harbor Boulevard and to the Esplanade.

One of the most important considerations when choosing a hotel near Disneyland might be location, and it’s tough to beat Carousel Inn & Suites in that regard. It’s about 5 minutes from the Esplanade, meaning you can get from your room to inside the parks in under 10 minutes (give or take). Not bad.

Carousel Inn & Suites is a Disneyland Good Neighbor Hotels, and is classified by Disney as a “Moderate,” which is the tier of basically all of the non-name brand hotels in the area. In terms of overall quality, it’s a solid hotel that probably is more or less a moderate. You can get an idea of how it stacks up to the competition, plus our overall comparison of the benefits of staying off-site versus on-site in our Where to Stay at Disneyland post.

Before we get into the meat of the review, I want to address the ‘ugly’ of Carousel Inn & Suites. If you regularly read this blog, you know I am not a fan of resort fees. Carousel Inn has a resort fee, but fortunately, it’s only $5/night. Oh cool, you might think, a relatively low fee to cover WiFi. Nope, this resort fee doesn’t cover WiFi. That’ll be another $6.95 per 12 hours. Well, maybe it covers parking. Nope, parking is valet-only and costs $14/day. Well, maybe it covers breakfast. Nope, you’re on your own for that.

Let’s just quit with this cute little guessing game. The resort fee at Carousel Inn & Suites literally covers none of the standard things you’d expect it to cover. In fact, I’m not sure what it does, besides providing another way for them to gouge guests.

Here’s a list of additional fees at Carousel Inn just in case those weren’t enough: crib fee, $10/night; roll-away bed fee, $25/night; bottled water fee, $3/bottle; room key fee, $20/key (if not returned at checkout). I think that about covers it. Carousel Inn gives out fees like Oprah gives away cars: YOU GET A FEE, AND YOU GET A FEE, AND EVERYBODY GETS A FEEEEE! If you like being nickel and dimed, it is most certainly the hotel for you!

As my tone might suggest, it’s going to be “one of those” reviews. Fortunately, there are some bright spots at Carousel Inn. You just have to notify the front desk for anything else you enjoy about the hotel so they can charge you a $9.95/night fee for it… 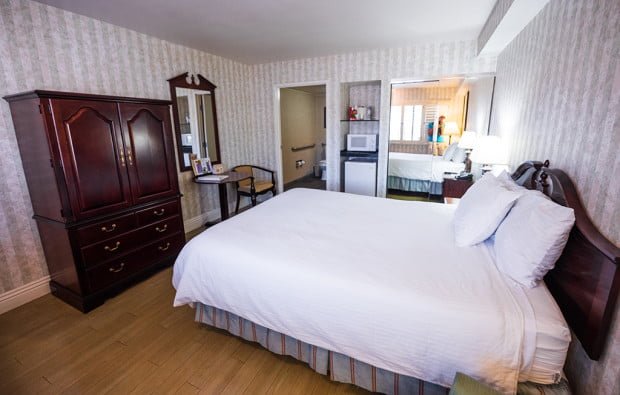 Carousel Inn describes itself as “Disneyland’s most stylish neighbor” on its website. That’s one way to put it. If by stylish they mean how your aunt who fancies herself as hip might decorate, then I agree. 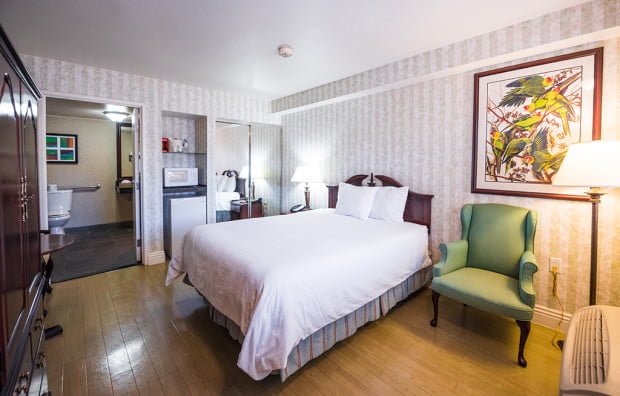 There’s really nothing wrong with the rooms, and they have a certain charm to them (they look clean and fresh), but stylish they most certainly are not.

The rooms reminded me of a more modern Candy Cane Inn, which isn’t necessarily a bad thing. Both hotels have a similar “guest room of an older relative” vibe to them–they are nicely finished, just in a mundane style. If you like the style of Candy Cane Inn’s rooms, you’ll like these rooms. 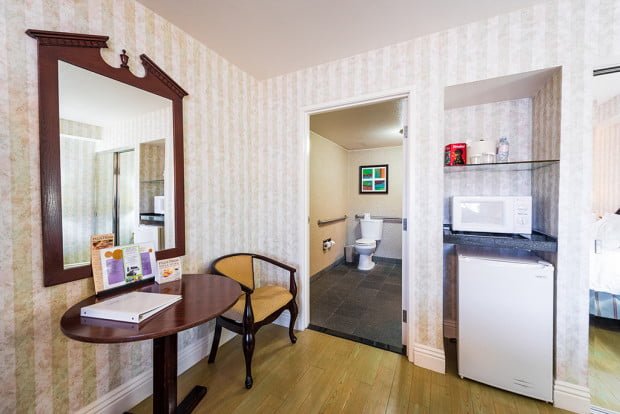 The biggest downside of the room was that the walls were paper thin, and you could hear any noise from adjacent rooms. I could even hear the valets talking amongst themselves from my room with the windows closed.

The upside to this is that the air conditioning unit sounds like a large, angry monster, and is sure to drown out any noise outside. This didn’t bother me as I don’t mind constant, static noise, but your mileage may vary on that one. 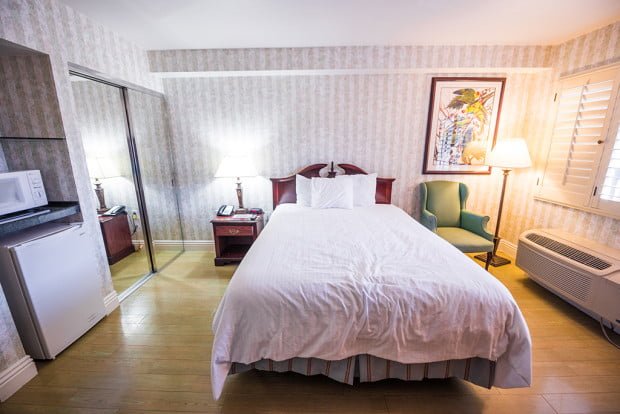 On the upside, the bedding was incredibly comfortable, both in terms of the plushness of the mattress and the pillows. The sheets and blanket themselves were clean and of nice quality, too. Definitely no qualms about the bedding, which is nice by Harbor Boulevard hotel standards. 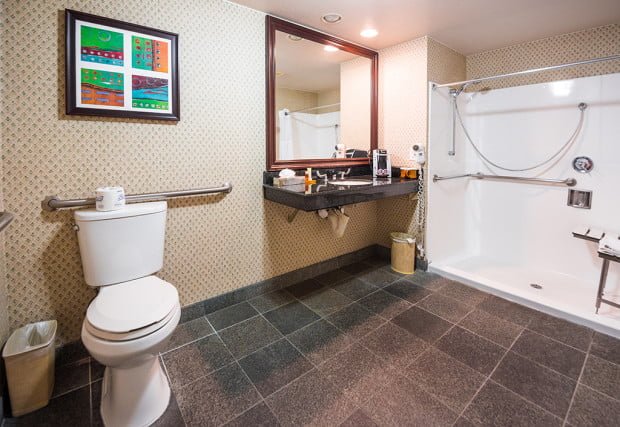 The bathroom was above average (note that I received an ADA-accessible bathroom) and although it was not trendy or modern, it definitely was not in any way lacking. Again, one of the better bathrooms of the hotels at which I’ve stayed on Harbor.

Here’s a video tour of the room. I asked whether this is something in which readers would be interested in the Hotel Indigo Anaheim Review and no one responded, so I’m guessing not, but maybe seeing the video makes a difference? Let me know in the comments if it’s something you’d like for other hotels; if readers general don’t care, I won’t waste my time. 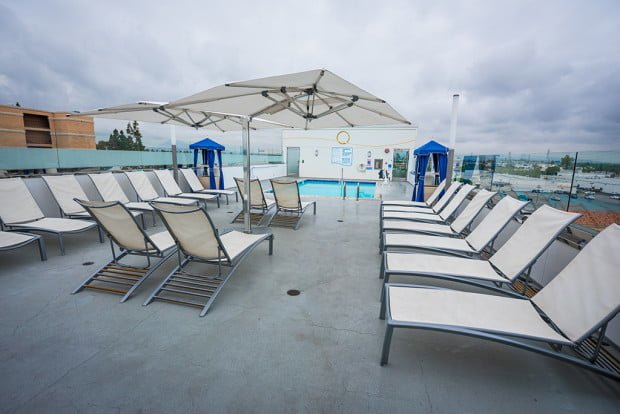 The main amenities at Carousel Inn & Suites were also pretty nice. There is a fireworks viewing platform, and although I wasn’t there for the fireworks, the hotel’s location suggests this would be a workable spot if you had to head home from the parks early. 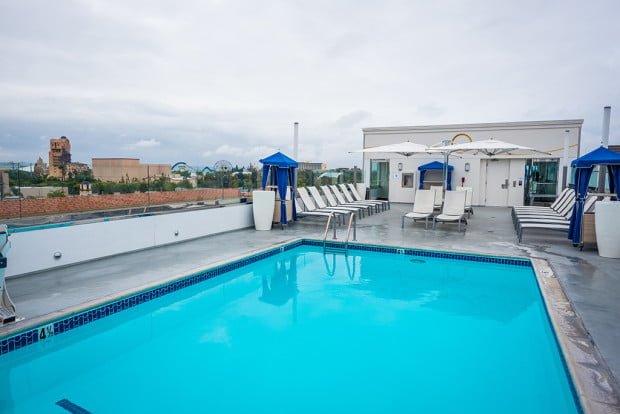 The pool is located on the rooftop, which is cool in itself because the area offers cool panoramic views of Disneyland and Disney California Adventure. Another plus is that the pool was slightly larger and nicer than normal pools near Disneyland. 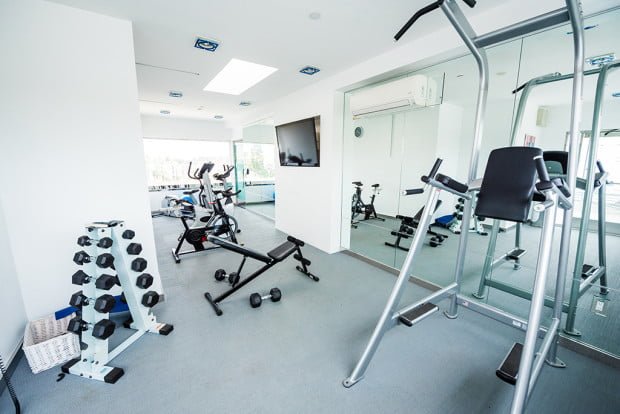 The workout room is also up there and is cramped (this is pretty common) but has a huge LCD television with cable, so that’s another plus. 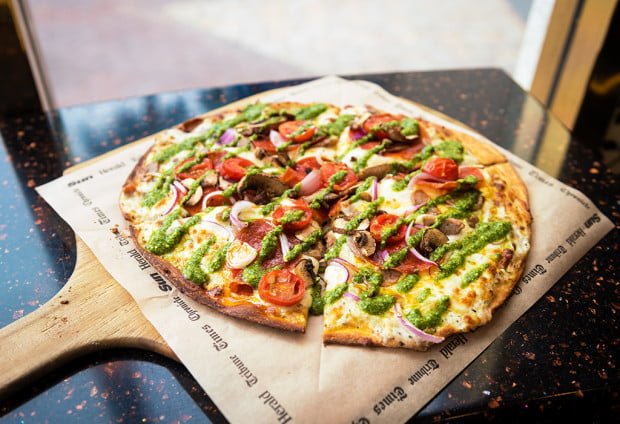 Then there’s the on-site restaurant, the Pizza Press. Think of this as Subway for pizzas (akin to the Blaze). This is one of the best restaurants near Disneyland, but I’m not sure it’s really a ‘perk’ of the hotel since it’s located right by the road and you can just as easily dine here if you stay at any of the nearby hotels. In any case, Pizza Press is a great value at $10/pizza and they offer Annual Pass discounts. AP discounts for an off-site restaurant? It’s like the anti-Carousel Inn! 😉

Okay, I’m not quite done complaining about the fees, so let’s go back to them. I abhor resort fees, but am slightly more understanding of them when staying at a resort that is providing something for the fee. First of all, Carousel Inn is not a resort, it’s a motel. Second, unless I am missing something, there are no “extras” provided by this fee that is not be at most of the world’s motels. It is quite simply a consumer-unfriendly, arguably deceptive added charge.

Then there’s the valet parking fee. Note that this is valet-only not because this is some swanky resort (remember, it’s a motel), but because the hotel is overbuilt and there is an insufficient number of parking spaces for the rooms available, meaning that cars must be double-parked. So, not only does parking take far longer than it should, but you are obliged to tip a valet for providing an inefficient service that you probably didn’t want in the first place. Given the parking predicament the hotel created for itself, they should be offering free parking as a way to apologize for the guest inconvenience, not spinning it as some perk and charging extra for it. 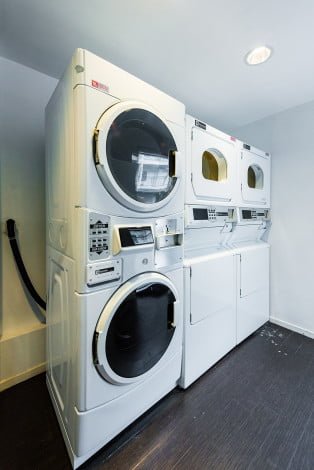 Rack rates at Carousel Inn & Suites range from around $110/night to $170/night, depending upon season, before all of the various fees and taxes. Given the location and room quality, the lower end of the rate is not too bad if you don’t need parking or WiFi.

Overall, Carousel Inn & Suites is a charming little hotel with an excellent location adjacent to one of the best off-site restaurants near Disneyland. None of this matters in the face of the egregious fees they tack on, especially with plenty of worthy alternative hotels that are similarly-priced (sans fees) on both sides of Carousel Inn. I suspect Disney will take a “hands off” approach to the management of this hotel, but I certainly hope that’s not the case, as the fees here are very consumer unfriendly and, frankly, offensive. I would not give my business to Carousel Inn again even if their hotel was half the price of other hotels in the area, and I wasn’t driving, needing WiFi, etc., purely as a matter of principle. I believe in voting with my wallet, and I oppose practices that are exploitative of consumers, even if said practices don’t impact me directly. Carousel Inn is a fairly nice hotel, but it’s a really lousy business.

Have you stayed at Carousel Inn & Suites in Anaheim? Did you enjoy your stay? Did you enjoy being nickel and dimed? What did you think of the guest rooms? Considering this hotel? Do you prefer staying off-site or on-site at Disneyland? Please share your thoughts or questions in the comments section below!