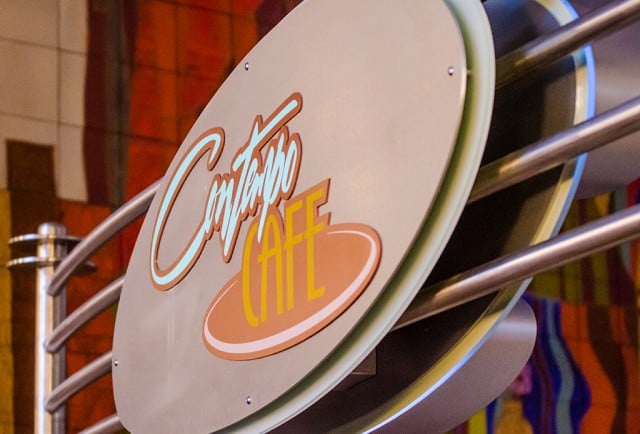 Contempo Cafe in Disney’s Contemporary Resort at Walt Disney World is a quick service restaurant serving breakfast, lunch, and dinner menu items. This review covers all three. Contempo Cafe participates in the Disney Dining Plan as a counter service credit. It does not accept the Tables in Wonderland card for a 20% discount. Contempo Cafe is a good value when paying out of pocket; it also can be one of the best value quick service restaurants for value on the Disney Dining Plan if you order a one of the more expensive entrees (there are only a couple).

I wouldn’t necessarily describe Contempo Cafe as unassuming, but I guess it sort of is. Besides the monorail overhead and the Mary Blair mural nearby (neither of which are actual characteristics of the restaurant), it just looks like a plain food court. In hotels that have nice table service dining, these “plain food courts” are sometimes afterthoughts that really don’t add much to the dining experience. That is not the case at all with Contempo Cafe.

To the contrary, Contempo Cafe is the best counter service restaurant at Walt Disney World. It may seem like this statement is intended for shock value because you literally never hear it called that, or even ranked alongside fan favorites like Sunshine Seasons, Flame Tree BBQ, Columbia Harbour House, or Tangierine Cafe. It’s better than each of those restaurants…it’s just often overlooked. In our 2017 update to our Top 10 Counter Service Restaurants at Walt Disney World article, Contempo Cafe once again claims the top spot, although the newly-refurbished (as of Spring 2017) Gasparilla Island Grill at the Grand Floridian is a formidable challenger at #2…

Since you probably won’t read any other site proclaiming Contempo Cafe is the best counter service restaurant at Walt Disney World, this is part review, part “advocacy piece,” I suppose. Let’s take a look at everything Contempo Cafe has going for it, as well as its weaknesses.

Contempo Cafe replaced the Concourse Steakhouse a few years ago, right at the start of Disney’s push for more diverse food offerings, and it probably benefited a lot from being developed at that time. This diversity is a big part of the appeal of Contempo Cafe. Of the counter service “heavy hitters” at Walt Disney World, only Sunshine Seasons can boast this type of diversity. Flame Tree BBQ, Columbia Harbour House, and Tangierine Cafe all have their specialties.

While they do offer things that deviate from these specialties, if you don’t like the specialties, there’s no draw to those restaurants. Contempo Cafe has a menu that includes several flatbreads, salads, hot sandwiches, and cold sandwiches. While there are “basics” in these categories like the Angus 1/3lb Cheeseburger, there are also more ambitious options. Some items are things you’d never expect from counter service, like pot roast. It’s a surprisingly deep and diverse menu. 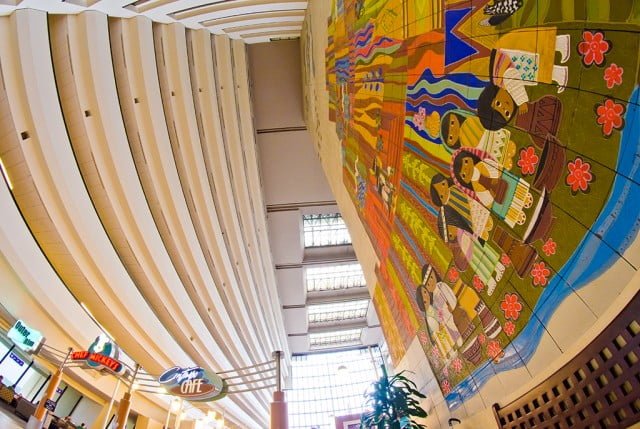 Much like Sunshine Seasons, Contempo Cafe is fairly loud during peak meal times at Chef Mickey’s. In Contempo Cafe’s defense, while it doesn’t have any real theming, we like the self-service ordering system, and we’ve never encountered crazy crowds here (perhaps it’s worse during conventions?).

Now, let’s take a look at some of the food… 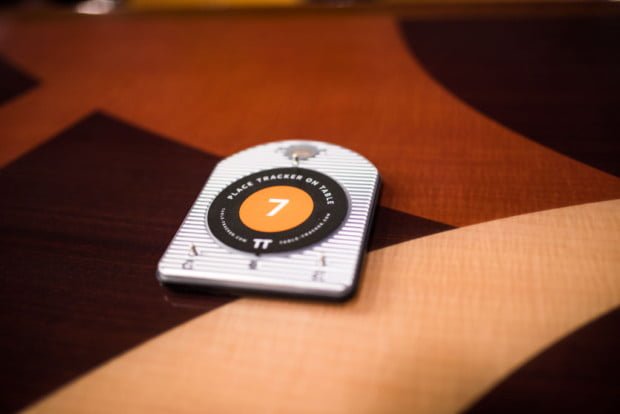 Like many other Walt Disney World counter service restaurants, Contempo Cafe uses a tracker system for ordering. After you order and pay, you receive this tracker, which is placed on your table.

This is not a pager. When your food is ready, it’s brought to your table, which the Cast Member locates through the tech-wizardry of this little device (assuming it’s working). 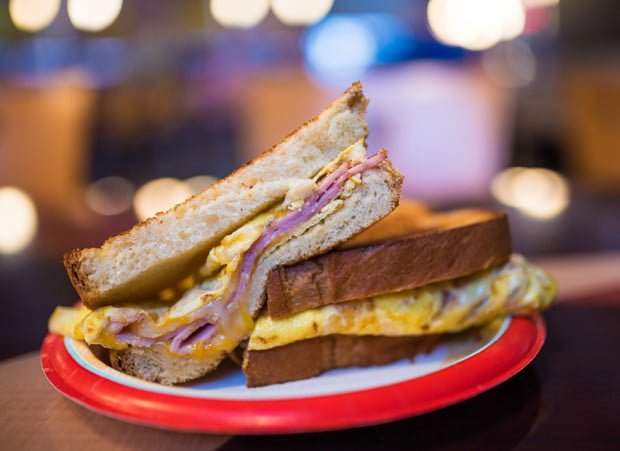 We’ve only done breakfast at Contempo Cafe once, when arriving at Bay Lake Tower on a redeye, and not wanting to do anything else. I had the Grilled Breakfast Sandwich, which was surprisingly good.

It was large and the eggs were real, which itself is a small miracle from counter service breakfast at Walt Disney World. It was a bit greasy, but I’d recommend it. 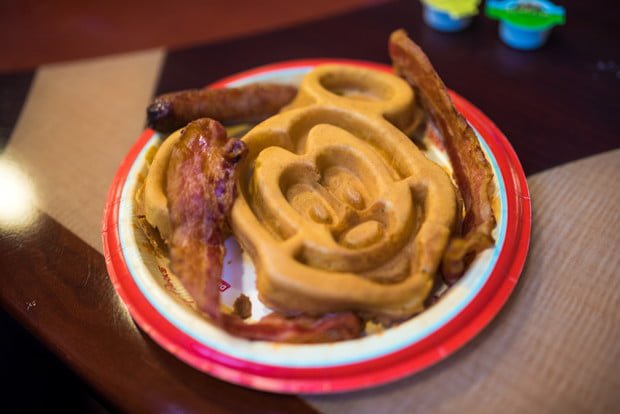 Sarah opted for an oversized Mickey waffles, which was overpriced and tasted exactly how you’d expect. They’re a fun novelty if you’re eating from a buffet and “need” a cute Instagram photo, but then will actually eat something else. I cannot fathom ordering Mickey waffles by themselves (after this experience, Sarah agrees). 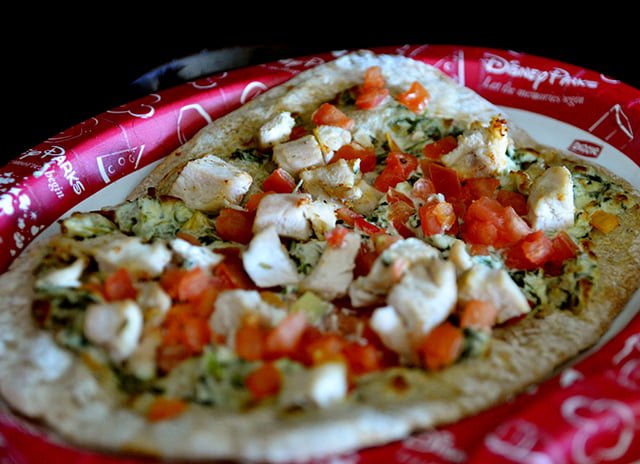 We’ve had several of the flatbreads at Contempo Cafe, and each has been impressive. These get swapped out fairly regularly, so there’s no telling if what’s mentioned here will be available on your visit. 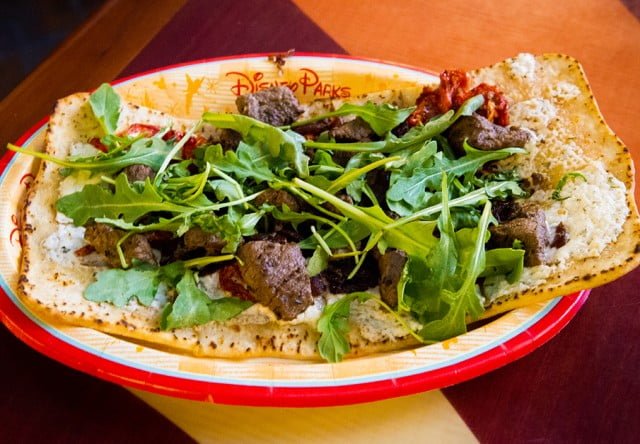 The Marinated Beef Flatbread with oven-roasted tomatoes, caramelized onions, goat cheese, and arugula is out of this world. This is among the best flatbreads at Walt Disney World, and that includes those at Jiko and California Grill.

We expected the beef to be tough, as is often the case with chunks or strips of beef used served as parts of other dishes, but that wasn’t the case. It was tender and perfectly cooked, and it worked very well with the goat cheese, arugula, and other ingredients. These ingredients complimented one another very well, and formed a complex flavor.

The Caprese Flatbread is also good, but it just doesn’t seem as substantive. Probably better as a snack to split rather than an actual meal. 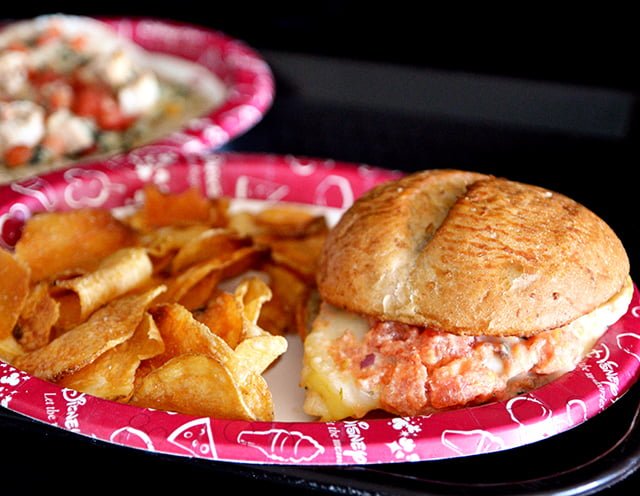 Another great menu item is the Grilled Chicken Sandwich Herb Marinated Chicken with pepper jack cheese and salsa-ranch dressing on a multi-grain bun. I’m not often a fan of grilled chicken sandwiches at Walt Disney World, since they normally lack flavor, but this one is great.

The real strength of this sandwich is that salsa-ranch dressing, which gives it great flavor and works well with the pepper jack cheese. The multi-grain bun is also a noteworthy improvement over the normal generic Disney buns. 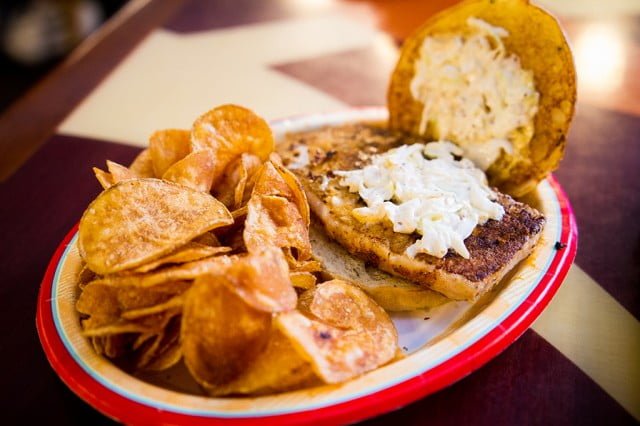 Another great option is the Spice Crusted Mahi Sandwich. The Mahi Mahi was larger than the focaccia roll on which it was served; Sarah grabbed a piece of it with her fork before I started eating (thief) and was audibly impressed. The fish itself was fresh-tasting, flavorful, and perfectly cooked (I was expecting rubby/microwaved). Photos don’t do it justice.

The crusting added nice flavor, too, and wasn’t overpowering. I had gotten a small plate of toppings from the toppings bar that I figured I’d have to add to the sandwich to make it taste decent, but I didn’t end up using them. Not only was the fish excellent, but the focaccia roll was much better than a normal Disney bun and the slaw/mayonnaise dressing added the perfect flavor. The sandwich turned out to be better than some dedicated fish entrees I’ve had in restaurants. 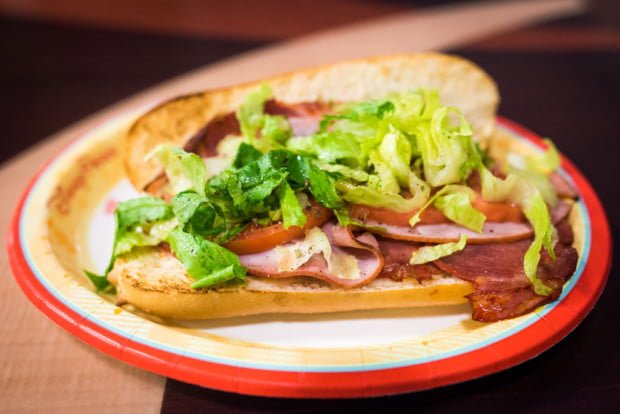 If you’re looking for a guilty-pleasure option, give the Hot Italian Sandwich a try. It’s bursting with flavor and despite being a bit greasy, is fabulous.

One of the better sandwiches at Walt Disney World. 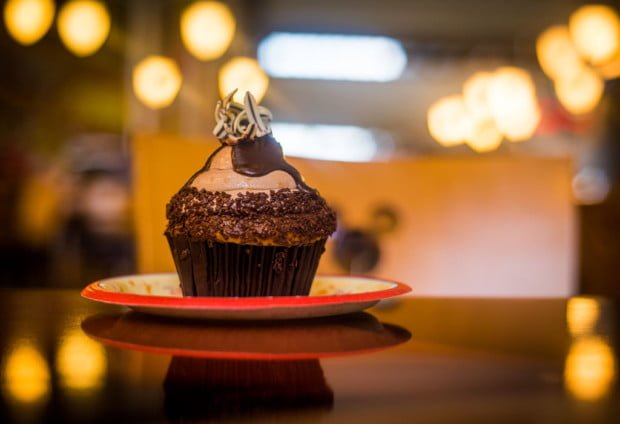 Contempo Cafe is also a Walt Disney World ‘cupcake mecca.’ They don’t have the largest selection of cupcakes, but it does seem to be a testing ground for cupcakes that are later (if well received) rolled out to other locations on property. In fact, Contempo Cafe actually has a cupcake calendar for what will be featured at various times!

Here are a few cupcakes we’ve tried at Contempo Cafe. Given the rotating nature of the cupcakes, don’t expect to find any of these on your visit… 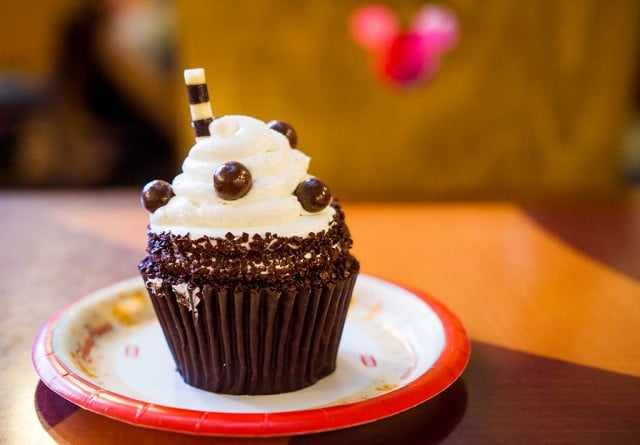 The Root Beer Float Cupcake seemed bizarre in concept but potentially delicious in taste…sorta like a bacon ice cream sundae. It was nothing like that (not just because it lacked bacon).

It turns out root beer flavor and cupcake are not two seemingly contrasting items that actually go together well. It wasn’t awful, but we wouldn’t recommend this cupcake. Kudos for Disney being ambitious and trying something new…I guess? 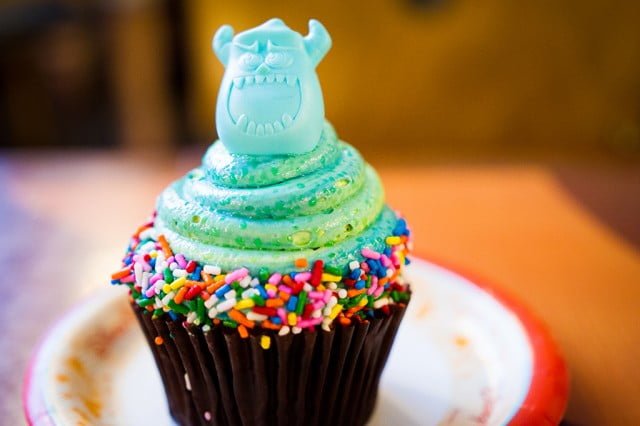 The Birthday Cake Cupcake was significantly better. This one was definitely less ambitious, as it’s essentially just a piece of quintessential birthday cake put into cupcake form and with a lot of icing. Still, we thought it was really good.

As long as you don’t mind a few cavities after eating it, we highly recommend this cupcake. 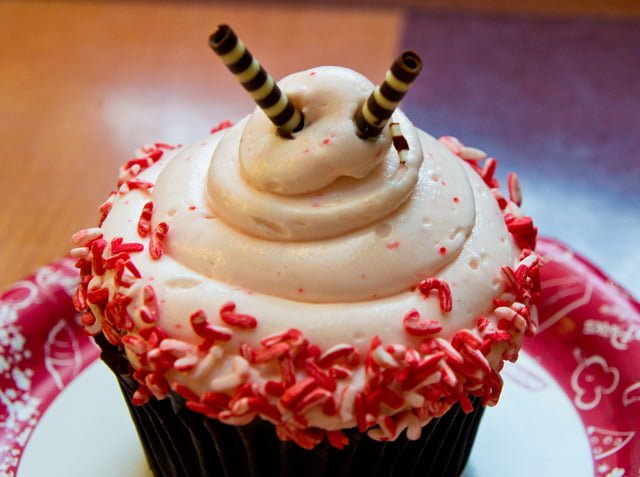 In addition to several other cupcakes we’ve tried here, Contempo Cafe is home to our all-time favorite cupcake: the Chocolate Peppermint Cupcake with Candy Cane Sprinkles. I’ve gone on and on about this cupcake in other posts, so I’ll spare you that in this review. Just make sure you order it if available. There’s a good chance you’ll see a new cupcake on your visit to Contempo Cafe, so if you like trying new and often “different” desserts, give whatever they have when you visit a try.

We’ve written this review in a manner that it doesn’t focus just on one visit and that’s so we can come back to it and easily add paragraphs concerning other items as we continue to visit Contempo Cafe. And continue to visit, we will! Contempo Cafe is our new go-to “the Magic Kingdom is way too busy right now, let’s get out of here for a bit” place to eat, and we fully intend to try everything on the menu. It will be tough for me to order anything besides the Mahi Sandwich (I’ll have to order it at least one more time just to see if I got lucky the first time), but I am eager to taste some of the other items, like the Italian Stacked Sandwich and the Hot Smoked Turkey Sandwich.

Overall, there’s not much to say beyond what has already been said. We both now think Contempo Cafe is the best counter service restaurant at Walt Disney World, and it’s only weaknesses to us is that it doesn’t do anything in the way of theme besides “basic food court with awesome stuff overhead” and that it’s a loud place to eat with Chef Mickey’s next door. In terms of food, we’ve been impressed with Contempo Cafe for the last few years, and we’re convinced that it’s the real deal. Thanks to its menu diversity and consistently high quality, it’s our #1 pick (bonus points for it always having cool cupcakes) for counter service at Walt Disney World. In fact, we’d sooner eat at Contempo Cafe than Chef Mickey’s…and we’re betting we won’t have to call 180 days in advance to get Contempo Cafe reservations!

If you’ve dined at Contempo Cafe in the last few years, do you agree with us that it’s one of the elite counter service restaurants at Walt Disney World? What menu items here do you like? What do you plan on trying? Hearing from you is half the fun, so please share your thoughts in the comments!