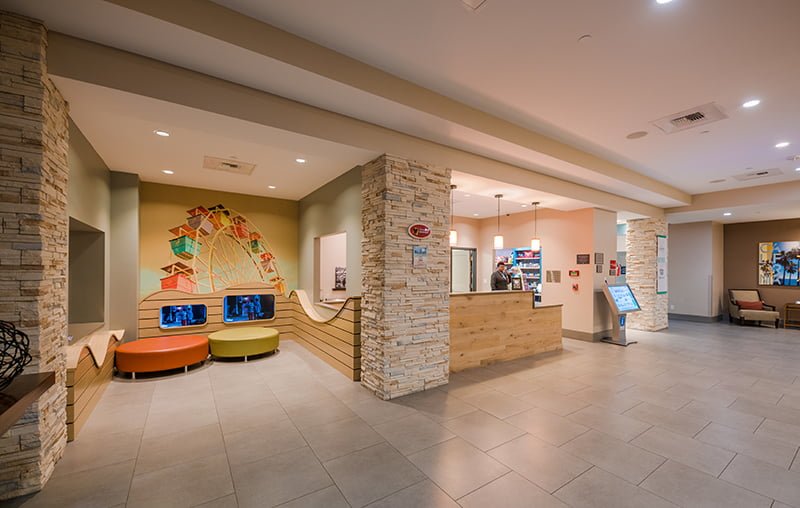 Country Inn & Suites by Radisson is a hotel near Disneyland, Disney California Adventure, and across the street from Anaheim GardenWalk. This review features room photos of the family suite, thoughts on amenities, and pros & cons of booking at this hotel versus its nearby competitors.

The hotel is about a 10-12 minute walk to the Disneyland Esplanade and about 2 minutes to Anaheim GardenWalk, which is a shopping, dining, and entertainment district akin to Downtown Disney (in fact, House of Blues recently relocated from Downtown Disney to GardenWalk). This all makes the Anaheim Country Inn & Suites by Radisson an conveniently-located option if you want fast access to Disneyland, Disney California Adventure, or a range of non-Disney entertainment and restaurants.

The Anaheim Country Inn & Suites by Radisson is similar to the Residence Inn by Marriott at Anaheim Resort/Convention Center and SpringHill Suites at Anaheim Resort/Convention Center, both of which we reviewed recently (click those hotel names to open either review in a new tab). There are also plenty of differences, which we’ll cover both in this review…

Upon checking into the Anaheim Country Inn & Suites by Radisson, I asked how long the hotel had been open. I recall when it debuted, but wasn’t sure how long ago that was–I figured it was probably approaching the one year mark. In actuality, it’s been open for a year and a half. Time really flies, especially with the breakneck pace at which hotels around Disneyland are being built and refurbished.

We’ve been gradually adding to our Disneyland Area Hotels Reviews & Rankings post, which now features 40+ hotels near Disneyland. However, there are still several we have yet to do, and some reviews we need to update due to refurbishments at a few of the hotels. With Star Wars: Galaxy’s Edge right around the corner, we know a lot of people are starting to plan Southern California vacations for next summer. we plan on getting more aggressive with our hotel stays this fall to make sure our resources are as good as possible.

If you’re considering the Country Inn & Suites or any hotel in Anaheim as part of a Disneyland vacation, you can book a hotel + ticket vacation package via Get Away Today to save money. In addition to the package discount, some hotels have ‘4th night free’ promos, and there’s currently a ‘5th day free’ promo on park tickets.

In addition to their normal discounts and special packages, you can save an extra $10 by using code TOURIST at checkout. Click here to check out the package discounts available. We normally recommend Get Away Today in our Tips for Buying Discounted Disneyland Tickets post—booking a vacation package makes an already great deal even better. 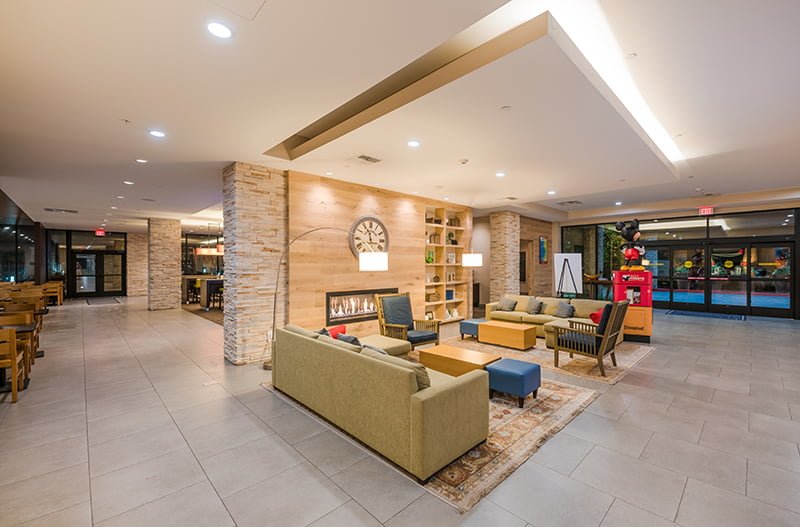 The first thing I really like about the Anaheim Country Inn & Suites by Radisson is the location. Unlike the SpringHill and Residence Inn, this hotel is not on the other side of Katella. It’s still roughly the same distance away (maybe 1-2 minutes closer to the parks), but not having to cross that busy Katella intersection is nice, especially when returning from the parks at night. The Katella/Harbor intersection is one of two spots in the area that could really use pedestrian bridges.

While we’d still prefer to be right across the street from the Disneyland Esplanade on Harbor Boulevard, we actually like the location here on Disney Way. It’s a low key area as compared to Harbor, and offers convenient access to I-5, which is right behind the hotel (we couldn’t hear the highway at all from our room). This shaves a few minutes off the commute to Los Angeles or the beach cities for non-Disney days.

While this probably doesn’t matter to most of you, the Anaheim Country Inn & Suites is also really convenient to the In-N-Out on State College Boulevard. This In-N-Out location is open until after park closing every single night of the week, making it perfect for a late night meal. We’ve done this a number of times, and it’s perfectly safe even after midnight. 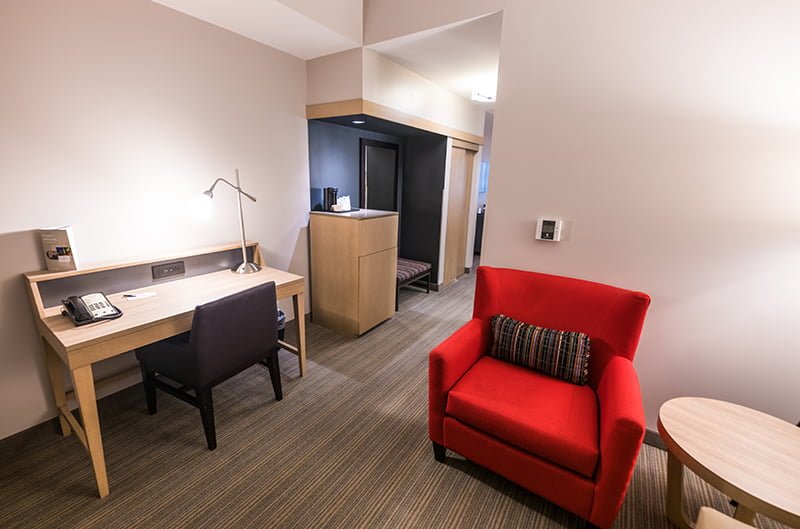 Another thing we really like about the Anaheim Country Inn & Suites by Radisson is the price. In spot-checking rates, I’m seeing prices that are almost always cheaper than the Residence Inn, SpringHill Suites, or Courtyard Anaheim Theme Park Entrance by Marriott.

There are several off-season dates when the Country Inn is under $140/night with the King Suites being only ~$30 more, which is an excellent rate for any of these new family suite hotels. Note that rates can be considerably more during convention dates, summer, and other peak seasons. As with all other hotels in Anaheim, rates fluctuate considerably, and you should always do comparison shopping with comparable hotels in the area before booking. 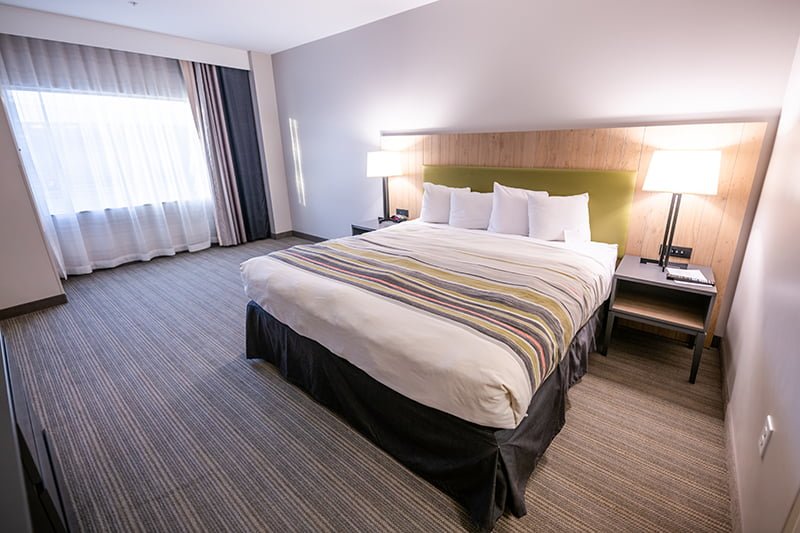 While the Country Inn & Suites by Radisson has standard hotel rooms, we opted to book one of the family suites, as this type of room has been popular among readers with families. The family suites are basically the same as the standard guest room, but with the added seating area and sofa sleeper. If you’re only interested in the standard room, just imagine the photos below without the added living room area.

We liked the family suites Anaheim Country Inn & Suites by Radisson, but they’re our least-favorite of the new hotels in Anaheim. In fairness, the competition is pretty fierce and these are still quite nice rooms. Our main complaint is the utilization of space, as the area with the bed had a ton of empty space and the living room was a bit cramped. 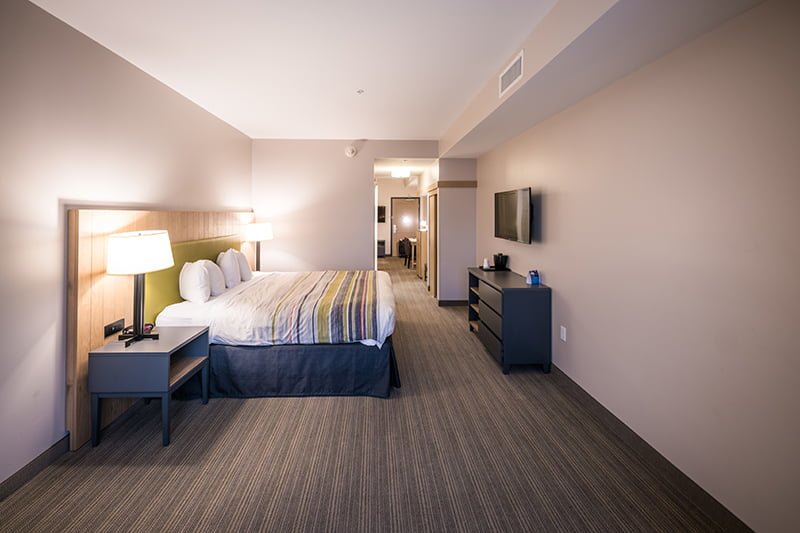 The layout for the sleeping area feels like it was designed for two queen beds, but king beds were put into the rooms instead. This criticism might seem like nitpicking, but with all of these new hotels being really strong, the distinctions lie in details like this.

Perhaps you’ll prefer all this empty space, wanting to do P90X or pretending to make snow angels on the floor. Who knows–we’re not here to judge. 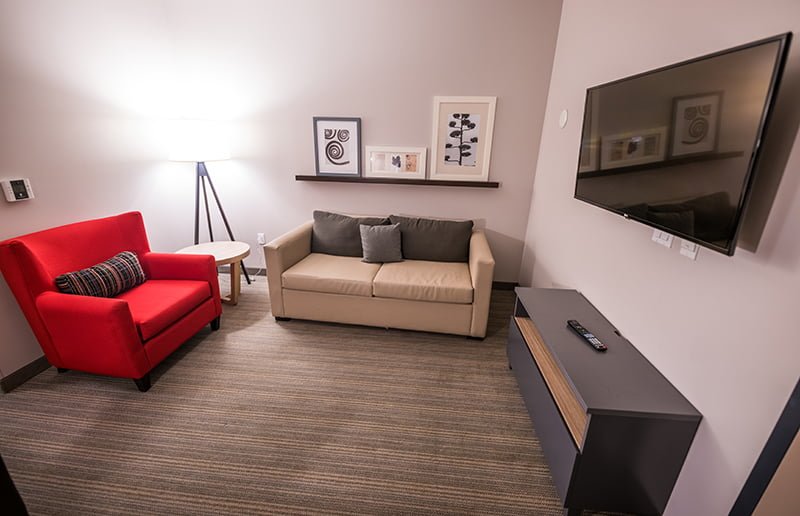 Otherwise, zero complaints about the guest rooms. We found the pillows and beds to be comfortable (the mattress was a bit firm, but still very good), the desk was serviceable, and the couch and chairs were also nice.

None of this was anything fancy–there’s little style to the room. The furnishings feel fairly cheap and will undoubtedly have to be replaced in 5 or so years, but it still felt new during our visit. Rooms also have an ironing board and iron, mini-fridge, microwave, coffee-maker, and USB charging ports. 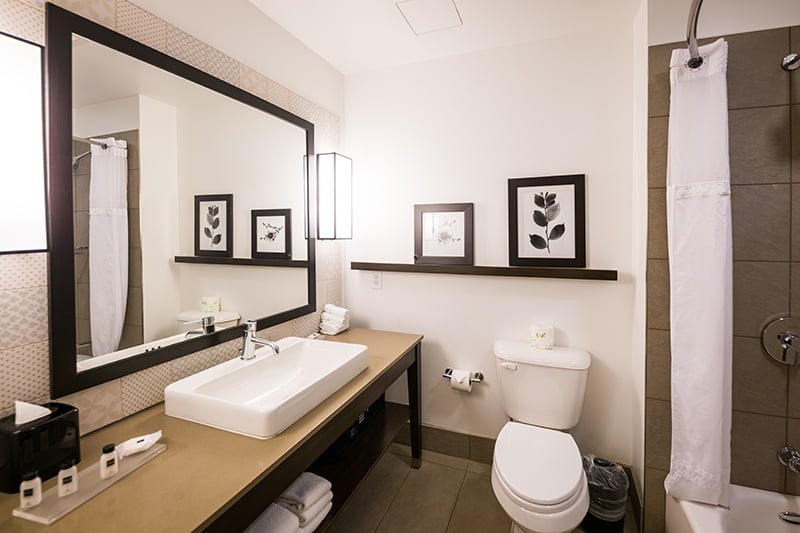 The bathroom feels modern, but it doesn’t break the mold of cramped Anaheim hotel bathrooms. Too bad some space wasn’t taken from the sleeping area for a bit more breathing room in here.

The free breakfast is pretty much par for the course with hotels in Anaheim. In terms of hot items, there are scrambled eggs, waffles, sausage, and bacon. For cold, there’s a variety of cereals, oatmeal, bread, bagels, yogurt, granola, fruit salad, and other things I’m probably forgetting. Available drinks include teas, fruit juice, and coffee. Nothing special or memorable, but definitely nice filler so you don’t have to spend as much in the parks. 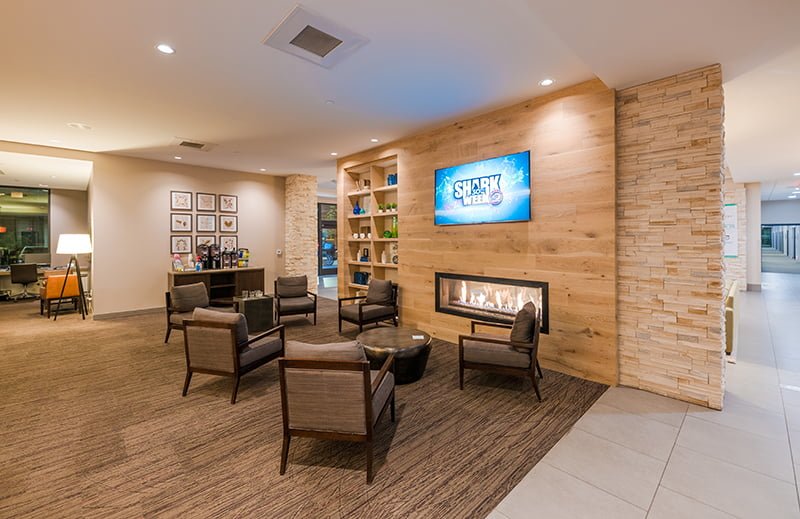 Other amenities include a 24-hour business center, a well-stocked fitness center, free self-service laundry room, children’s movie theater, lobby convenience store, and restaurant/bar. It’s worth pointing out that features like free laundry and the movie theater are uncommon in Anaheim, so these are definite selling points for the Country Inn.

Of course, there’s also a pool. This one is pretty nice by Anaheim standards, and is secluded from passers-by (not that there are many) and the parking lot. It’s not a rooftop pool like some other hotels in Anaheim, but it’s still far better than average. 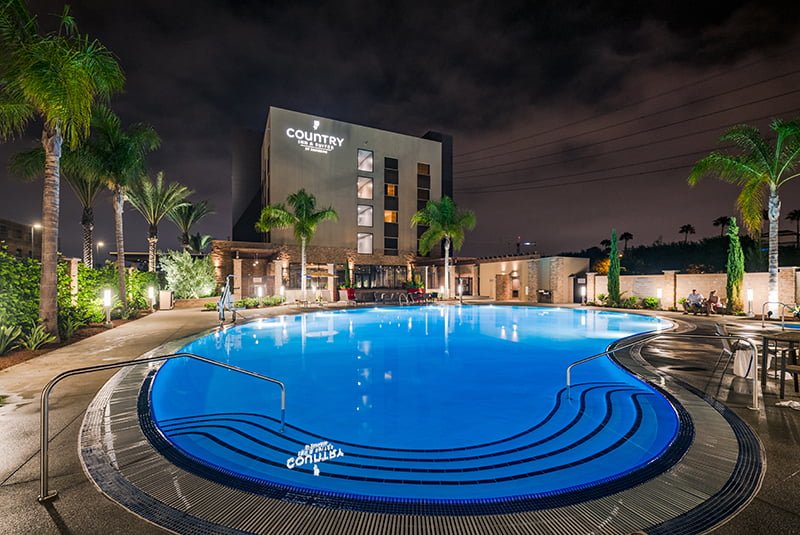 Overall, the Country Inn & Suites by Radisson is a solid option, but it can’t quite hold its own against the other new family suites in Anaheim. We’d recommend it to families if the price is markedly cheaper than those other suites, if you want a location away from Harbor/Katella, or if you’re not booking a family suite but want to get into one of the newer hotels in Anaheim. It’s tough to be too critical, because the Country Inn is a very good hotel and among the best in Anaheim, just not quite as good as other recent developments near Disneyland.

Have you stayed at the Country Inn & Suites in Anaheim? Do you agree or disagree with our assessment? Thoughts on the rooms or amenities? Any questions? Hearing your feedback–even when you disagree with us–is both interesting to us and helpful to other readers, so please share your thoughts below in the comments!