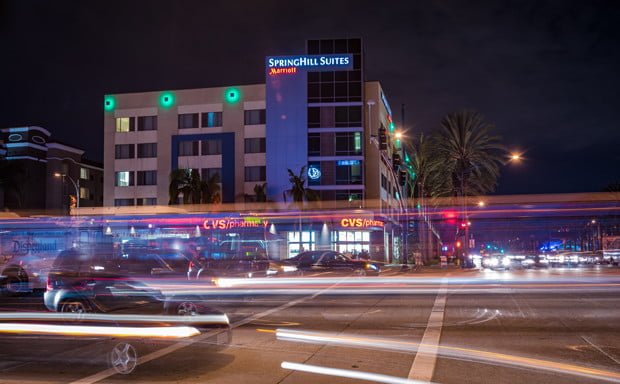 SpringHill Suites Anaheim Resort/Convention Center is a hotel near Disneyland and Disney California Adventure with spacious, family-oriented accommodations. This hotel review features room photos, thoughts on amenities, and pros & cons of booking at this hotel versus its nearby competitors.

The SpringHill Suites Anaheim Convention Center is about a 10 minute walk to Disneyland, and roughly equidistant to the Anaheim Convention Center…hence its name, I suppose? That makes it convenient if you’re attending a convention and also wanting to visit Disneyland. In that regard, the location of this SpringHill Suites is not as good as some of the ‘across the street’ Harbor Boulevard hotels, but it’s only slightly farther away.

However, it has a solid location at the corner of Katella and Harbor, with a CVS Pharmacy directly under it (one of the largest and nicest CVS stores I’ve ever seen) and a Walgreen’s across the street, making the SpringHill Suites a solid option if you want a convenient place to buy groceries or sundries. The SpringHill Suites Anaheim Resort has a lot more going for it than that, too…

SpringHill Suites at Anaheim Resort/Convention Center is a Disneyland Good Neighbor Hotel, meaning you can book it as a vacation package directly from Disney, but we never recommend doing that. Good Neighbor status is a meaningless distinction–it’s purely paid marketing, not a ‘Good Housekeeping’ seal of approval by Disney.

If you want to know how SpringHill Suites compares to the competition in my opinion (which is based on the perspective of someone who has stayed in 40+ hotels near Disneyland), check out our Disneyland Hotels Reviews & Rankings post. You can also read our overall comparison of the benefits of staying off-site versus on-site in our Where to Stay at Disneyland post. 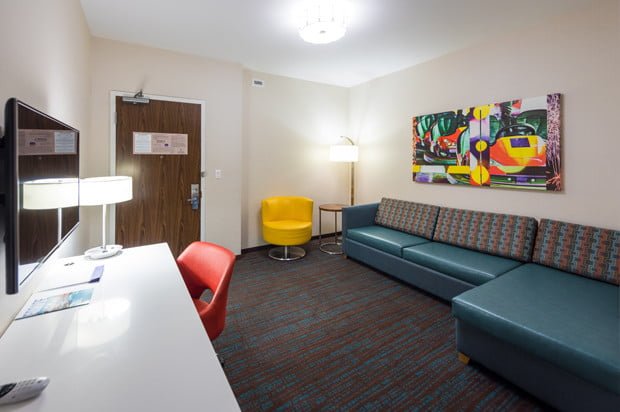 Okay, let’s start this SpringHill Suites at Anaheim Resort/Convention Center review with a look inside the rooms. We stayed in a standard queen room, which featured a large sectional couch near the door with a television and desk across from it, with the main sleeping area and second television separated by the bathroom in between.

To give you some perspective, for both the above and below photos, I was standing at the bathroom–the top photo is just facing the left/door, whereas the right is facing the right/window.

This layout was nice, and one we had not encountered with other similar hotels in Anaheim. It effectively compartmentalized the room, and would allow early-risers or night-owls to catch up on Swamp People while others sleep. Assuming the other family members are not light sleepers, as the two areas are not sectioned off with a door or curtain. 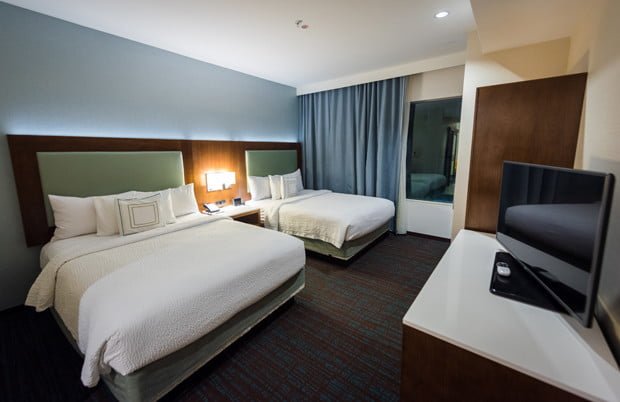 The rooms are nicely done, with a light and vibrant color scheme. The finishing and details clearly indicate that these rooms are new (I also witnessed this hotel being built, so I know it’s new).

Personally, the style here did not do as much for me as the other new hotels in Anaheim at which we’ve stayed. While things like the Autopia-inspired art were fun touches, it just doesn’t feel as modern as its competitors.

Aside from the art, the design felt more conservative (perhaps trying to prevent it from aging too quickly?), whereas others seemed to aspire to be more trendy. This is really a minor quibble–it’s still much more fresh than 95% of the hotels in Anaheim. 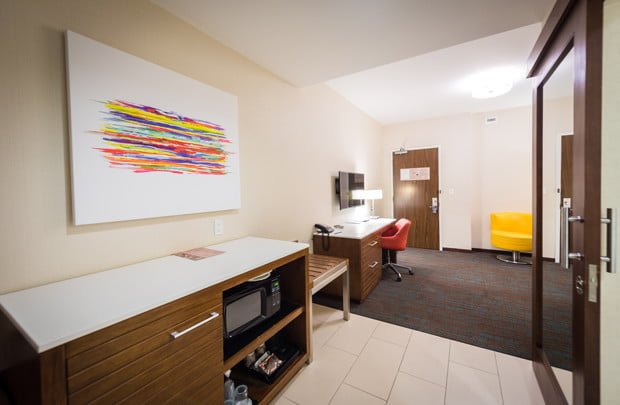 As with other family suites near Disneyland, one of the selling points of the SpringHill Suites Anaheim Resort/Convention Center is that it includes microwaves and mini-fridges in each room.

This, coupled with its location above the large CVS Pharmacy makes it pretty easy to prepare light meals in your room if you want to save money. It should be noted that most higher end/business hotels near the Anaheim Convention Center do not have fridges or microwaves.

My biggest complaint about the SpringHill Suites was the bedding. The mattress was overly-firm for my tastes, and nothing about the sheets or pillows screamed ‘high quality’ to me. After a long day of walking around Disneyland and Disney California Adventure, I still fell asleep in like 97 seconds, but I feel it’s worth mentioning.

That hotel is about the same distance from Disneyland as all of those. You can click those links to read separate reviews of those hotels (we’ll compare it to the Hyatt House below). 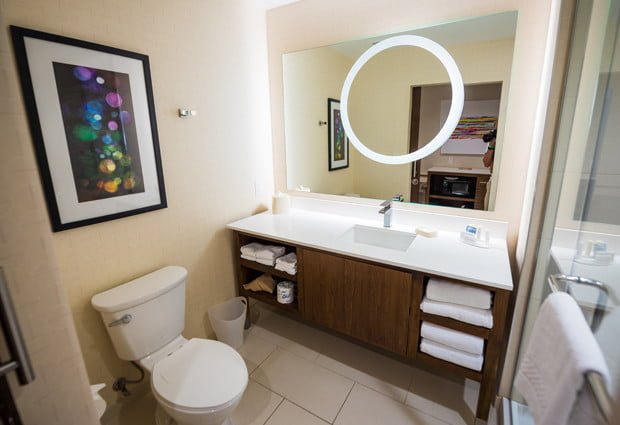 The bathrooms are a definite plus, and in the same upgraded style as others around Anaheim. Nice basin sink, marble counter top, and highly effective lighting.

Shower is also a walk-in, which is another plus (for us, at least). The only downside here was that the bathroom was a bit cramped, which is probably a result of the layout giving more space to the living room and bedroom areas. Frankly, that’s a trade-off I’ll gladly accept, but you may not feel the same way if you have 4 people all trying to get ready at the same time in the morning. 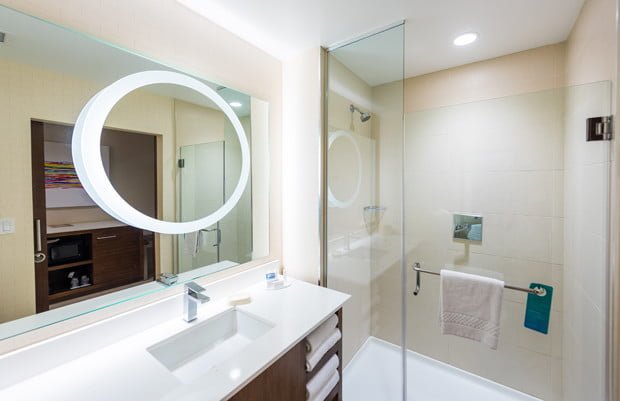 In terms of price, SpringHill Suites Anaheim Convention Center is very competitive. I’m reluctant to share the current ‘normal’ price range, because I recently went back to start refreshing old Anaheim hotel reviews, and I noticed even some I had written 2 years ago are now off by 50% or more.

Hotel prices have steadily risen in Anaheim, and even with a recent surge in construction, renovations, and new hotels opening, the inventory of rooms is still below what it should be (and will need to be once Star Wars: Galaxy’s Edge opens). This is my way of saying that you should take price ranges listed in my past Anaheim hotel reviews with a grain of salt–prices have increased across the board and also vary considerably based upon the month you visit. 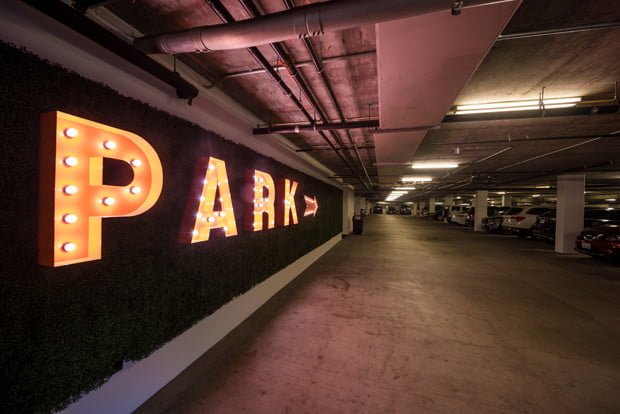 Note that Get Away Today also does discounted ticket and hotel bundle pricing for this hotel, and guests who book via them get half-priced parking. (Parking is normally $18/night here.) The self-parking set-up is nice at the SpringHill Suites, with an underground garage and easy in/out privileges. 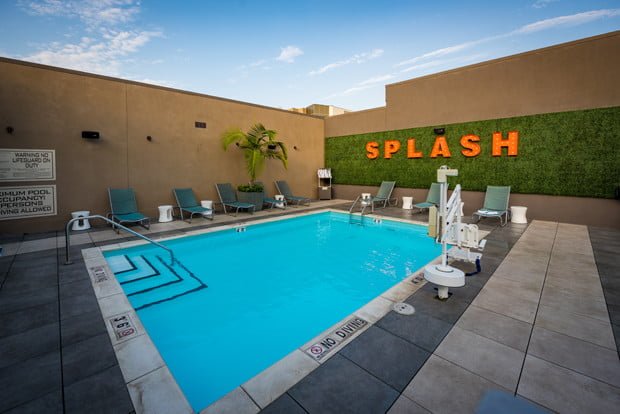 As with pretty much every hotel in Anaheim, the pool feels like an afterthought. It’s undersized (like all of them), but it’s located on the rooftop!

I consider this a big win. There’s also ample lounging space, and an area where you could sit and watch Disneyland’s fireworks if you were so inclined. 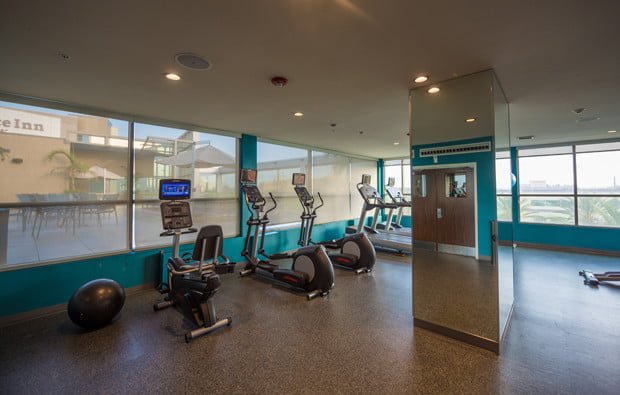 The fitness center is in this same general vicinity, meaning it also has some nice views.

Unlike many fitness centers at hotels near Disneyland, this isn’t in a window-less basement or converted guest room, which is a big plus. 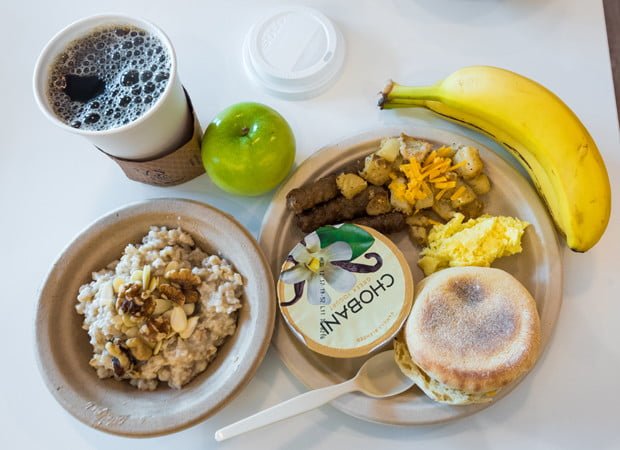 The free continental breakfast is not the best, which is about par for the course in Anaheim. The eggs and sausage were pretty much inedible.

On the plus side, there were some nice packaged items (Chobani yogurt!), fruit, and coffee, so it wasn’t a total loss. 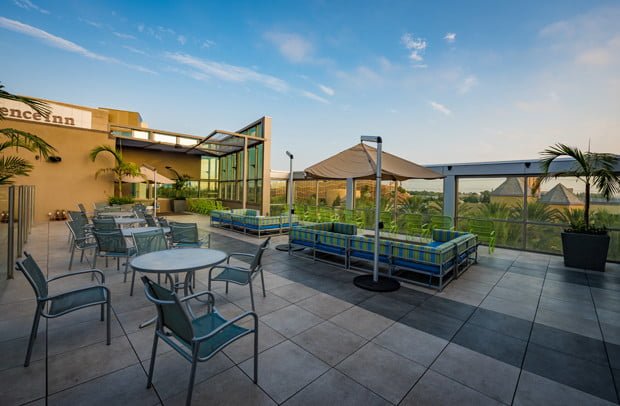 I think the SpringHill Suites Anaheim Convention Center compares very favorably to the Hyatt House Anaheim. In addition to its pricing being slightly lower (on average), the rooms are also larger. The big difference is the second television and the separation of the seating area, which could be a nice gain for a family looking to spread out. 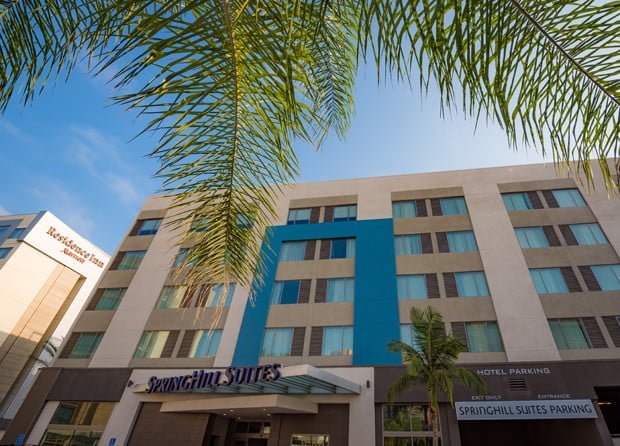 Overall, the SpringHill Suites Anaheim Convention Center is a very strong hotel choice for families with kids wanting to stay in a single room. It’s incredibly spacious, making it possible for 2 adults and 2 kids to stay in a standard room here without feeling claustrophobic, as would be the case in many of the basic motel-style hotels across the street from Disneyland on Harbor Boulevard. This type of hotel is clearly in high demand, as almost every new hotel built in Anaheim recently has been in this style. The SpringHill Suites is one of those new/newish hotels, and it compares very favorably to the other family suite hotels, thanks primarily to its mix of space and price. All things considered, we think this is a top 5 hotels in Anaheim and one of our top picks for families visiting Disneyland.

Have you stayed at the SpringHill Suites Anaheim Convention Center? What did you think of the room layout? What about the bedding? Did you enjoy your stay at this hotel? Thoughts on the breakfast? Considering the SpringHill Suites? Hearing your feedback about your experiences is both interesting to us and helpful to other readers, so please share your thoughts or questions below in the comments!