Some exciting news to report today as part of our continuing (and apparently several year-long) #AvatarWatch. News broke yesterday on Twitter (via @DisKingdom) that Avatar director, James Cameron was touring Disney’s Animal Kingdom along with Imagineer-extraordinaire Joe Rohde, and Tom Staggs, Chairman of Walt Disney Parks and Resorts. 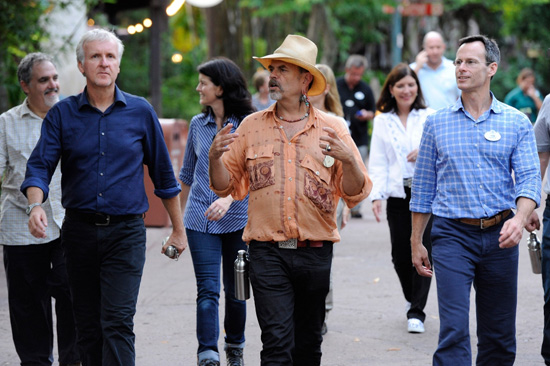 Here are some excerpts of the story from the Disney Parks Blog:

“Getting the chance to roll up my sleeves and explore Disney’s Animal Kingdom from the inside out was a phenomenal experience,” said James Cameron. “As I walked through the park, I kept imagining Pandora coming to life all around me and found my mind racing with all the possibilities of what we will be able to create in the years ahead. Disney’s Animal Kingdom is truly a remarkable place and I can’t think of a better home for our first AVATAR experience.”

Cameron and Landau are touring the Walt Disney World Resort this week as part of the creative partnership announced in September between Walt Disney Parks and Resorts, Fox Filmed Entertainment and Lightstorm Entertainment. Construction of the first AVATAR-themed land is expected to begin at Disney’s Animal Kingdom by 2013.

“We do a significant amount of work at the beginning of our projects to ensure that the final experience has the attention to detail, theme and uniqueness for which Disney is known,” said Tom Staggs. “Today’s visit is an important step in the creative process and we are excited about getting started on what will be a spectacular addition to Disney’s Animal Kingdom.”

Along with their team at Lightstorm Entertainment, Cameron and Landau are serving as creative consultants on the project, working side-by-side with Imagineers to dream up groundbreaking experiences that will take guests deep into the worlds of AVATAR like never imagined.

“AVATAR and Disney’s Animal Kingdom share a common bond in that they both focus on adventures that will radically change your perspective. They call you to take action on behalf of nature wherever it may be found,” said Joe Rohde, who led the creative team that designed the park. “This is a rare opportunity to collaborate with Jim, who has an incredible eye for detail and a passion for doing things that haven’t been done before.”

To me, the most important aspect of this article is the “Cameron and Landau are serving as creative consultants on the project, working side-by-side with Imagineers” line. I think at this point, the walk yesterday might have been merely an introduction between James Cameron and Joe Rohde and a nice photo op for the Disney Parks Blog, rather than a discussion of anything substantive.

The reason I think that it’s important that Rohde (and his team of Imagineers) and Cameron are working side by side on this project is because it will likely give Rohde a blank checkbook, so to speak. That’s the reason I’ve been an advocate of this project since the announcement. Not because I like Avatar (I don’t care about it), but because Cameron is a perfectionist, and if he has creative control on this project, I think it’s far more likely to go over-budget than have its budget slashed, like so many other Walt Disney World projects in recent memory. This is purely conjecture, I don’t have any inside information to support it, but I think that while Rohde alone doesn’t have the klout to override the bean-counters, Cameron certainly does. With Cameron and his team opening the door for Joe Rohde and the Imagineering team’s imaginations to run wild, I think that this project, when it finally comes to fruition, will be spectacular.

Time will tell whether this ends up being true, but if so, I think even those who are opponents of the project will eventually come around when they see the finished project, which, I think, will finally bring something Tokyo DisneySea quality stateside.