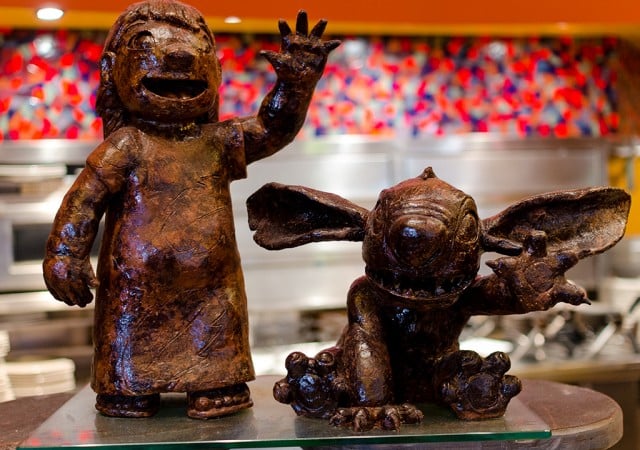 Kona Cafe is a restaurant in Walt Disney World’s Polynesian Village Resort. We’ve already reviewed Kona Cafe for lunch and dinner, but breakfast is also a popular meal at Kona Cafe, so we figured we’d cover that now. The breakfast menu doesn’t really have the Asian flare of the other menus, but instead is a somewhat tropical take on American breakfast.

We covered this the dinner review, but our biggest complaint about Kona Cafe remains the ambiance. It’s an open-air restaurant that in the open-air atrium of the Great Ceremonial House at the Polynesian. This in itself wouldn’t be an issue as the Great Ceremonial House has a very relaxed and tropical ambiance. The problem is when you throw guests into the mix–and guests will invariably be thrown into the mix because Kona Cafe is adjacent to the incredibly popular ‘Ohana.

If you’re unfamiliar with the layout of the Polynesian, the photo below should give you an idea. This shot was taken from across the upper level lobby. In the foreground is a seating area that becomes a de facto waiting area for ‘Ohana. To the near right is Tambu Lounge, a bar that is basically part of ‘Ohana. Just past that, in the corner, is ‘Ohana. 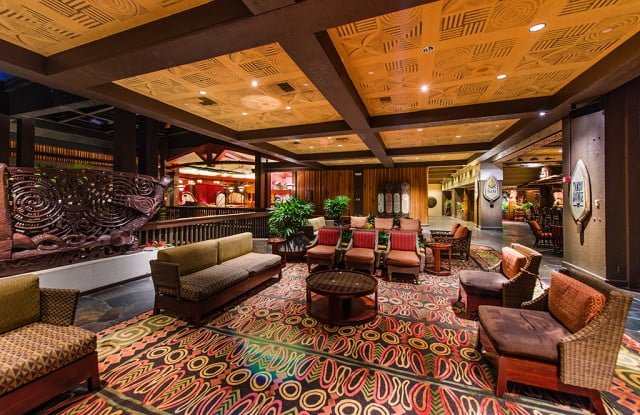 Immediately to the left of ‘Ohana (basically at the top center of the photo) is Kona Cafe. Guests seated right by the edge of this restaurant will have a lovely view of patrons waiting for ‘Ohana at breakfast. This issue is totally eliminated if you’re seated away from the outer edge of the restaurant, though.

Drinks shouldn’t be overlooked at Kona Cafe, where the 100% Kona Coffee French Press Pot serves one of the best cups of coffee at Walt Disney World (right up there with Artist Point, Yachtsman Steakhouse, and Victoria & Albert’s). 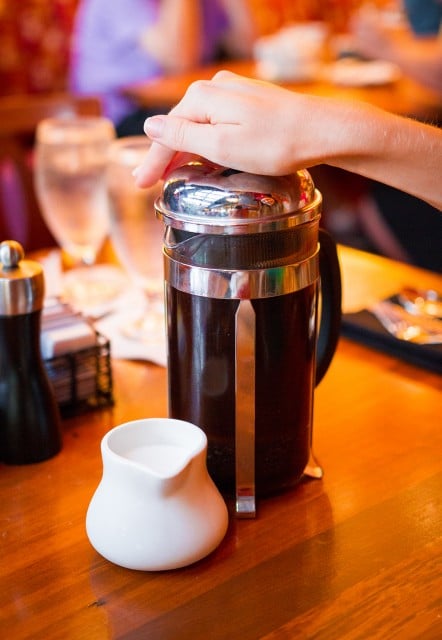 Sorry, Starbucks, but this is the way to start your morning if you’re staying at the Polynesian. The Mega Berry Smoothies and Lilikoi Juice are also great.

We highly recommend with starting out with one of these three Kona Cafe specialties (especially if you’re on the Disney Dining Plan, as they’re a better value than regular juice or soda). 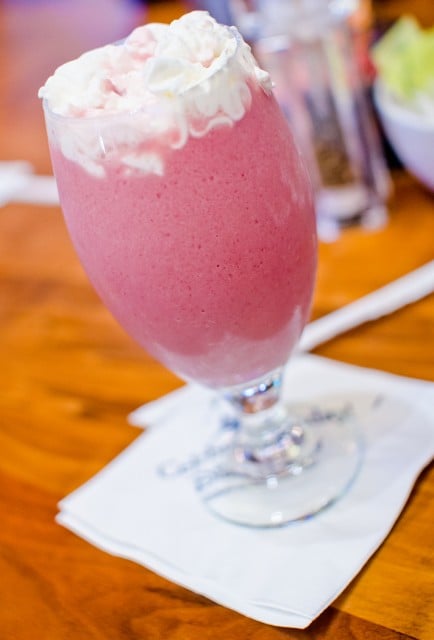 Our first time, we bought into the hype and dined here because of it. This was a rookie mistake. Getting the Tonga Toast wasn’t the mistake–that was a brilliant decision as Tonga Toast truly lives up to the hype. The mistake was going to Kona Cafe to get it.

As we later learned, Tonga Toast is also available downstairs in the Polynesian at Captain Cook’s for less than half the price charged at Kona Cafe. The only thing it lacks at Captain Cook’s is the Strawberry Compote, but I can do without that, anyway. 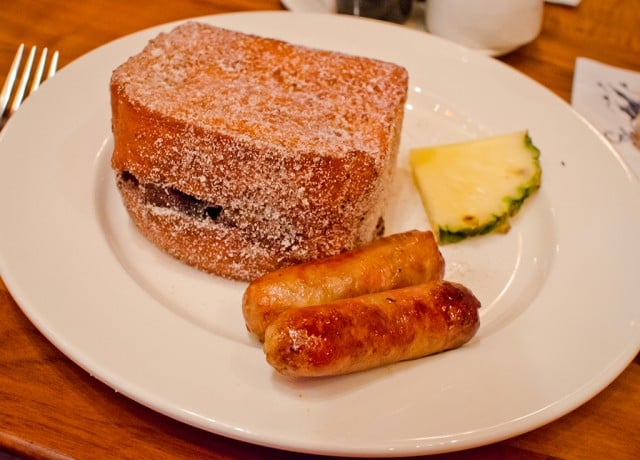 So what, exactly, is Tonga Toast? Banana fried awesomeness in dough form. It’s two pieces of sourdough bread with bananas in the center that are egg battered and deep-fried, then rolled with a liberal amount of cinnamon sugar. You know those Cheerios commercials “heart healthy” commercials? I’m pretty sure there won’t be a similar commercial for Tonga Toast anytime soon.

Who wants to eat a healthy breakfast at Walt Disney World, though? With Tonga Toast, you get something that is flat out delicious and is a breakfast you’ll crave later at home. I personally think the Strawberry Compote is a bit much (both in terms of flavor and sugar overload–banana and strawberry go well together normally, so perhaps I’d like it more without the cinnamon sugar on the Tonga Toast?), but I highly recommend the Tonga Toast. 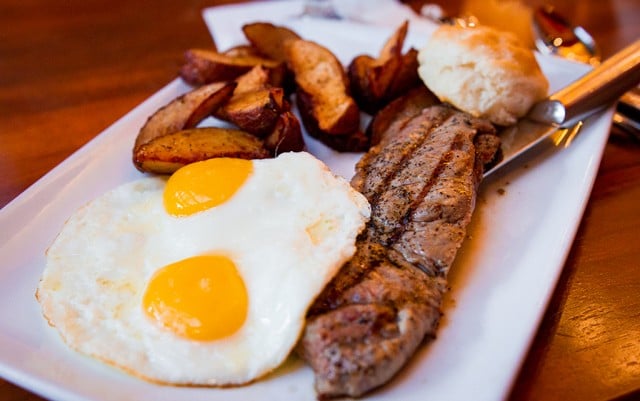 Fortunately, Tonga Toast isn’t the only great thing on the Kona Cafe menu. We are normally not huge fans of breakfast at Walt Disney World, as it’s mostly generic or fake-tasting items, but Kona Cafe is a rare gem among breakfast locations. I’m a fan of the Steak and Eggs, which is a smallish New York Strip Steak along with eggs, a biscuit, and potatoes.

The steak isn’t nearly as inspired as the one they serve at dinner, but it has good flavor and is a decent cut. It’s a fairly reasonable value (for a steak at Walt Disney World), too. 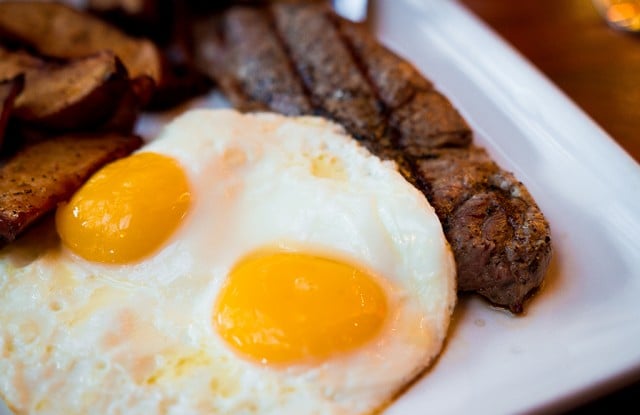 Another item that seems to be pretty heavily hyped among fans is the Big Kahuna, which essentially contains a little of everything: French toast, pancakes topped with pineapple sauce and macadamia nut butter, eggs, potatoes, plus ham, bacon, and sausage. We do not give this item a gold star.

Here, we think the hype is the result of a lot of different things being offered in one single entree that’s not all that expensive. On paper it sounds great, especially for the price. However, the portions of ham, bacon, and sausage are very small, so that’s somewhat illusory. 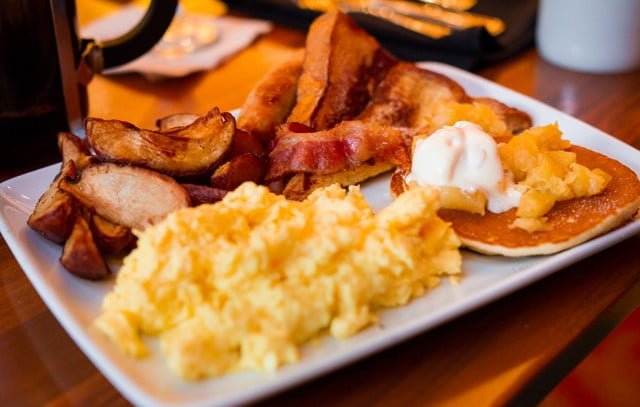 More importantly, the only stand-out here is the pancakes, and those are available as a separate menu item (Macadamia-Pineapple Pancakes). That’s what you should order instead if you want those pancakes. The pancakes are delicious and an item that actually is somewhat “special” at Kona Cafe, unlike the rest of the Big Kahuna platter, which is all fairly generic.

The Big Kahuna is by no means bad, but it’s not deserving of the hype, which seems to us perpetuated not by the quality of the meal, but by the quantity of items in it. 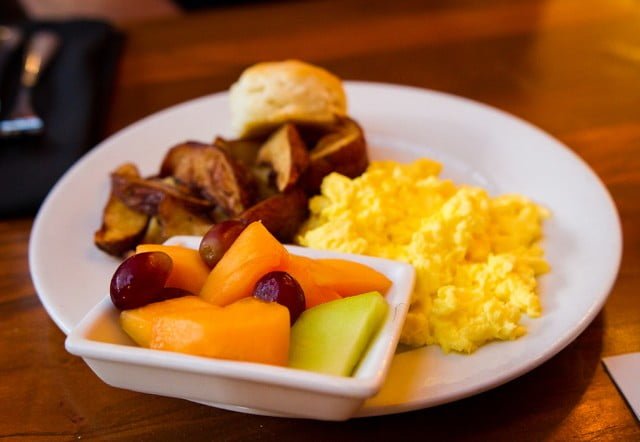 Besides the Steak & Eggs and the Macadamia-Pineapple Pancakes, we’ve also heard very good things about the Samoan, which is poached eggs with Hollandaise served over smoked pulled pork hash, and it certainly sounds unique, but we haven’t had a chance to try that yet.

Otherwise, the menu is mostly composed of fairly standard breakfast options. Still, considering the quality (or lack thereof) of breakfast at most Walt Disney World restaurants, the fact that Kona Cafe has around 3-4 solid options plus great coffee and drinks should be considered very impressive relative to the field.

Overall, it’s difficult to arrive on a score for Kona Cafe because of the Tonga Toast dilemma. Tonga Toast is the main draw here, and this review is largely based upon it. On the one hand, Tonga Toast is delicious, and a great option for breakfast at Kona Cafe…so it should score points for that. On the other hand, Tonga Toast is also available at Captain Cook’s, and is much cheaper there…so Kona Cafe should lose points for that. It helps Kona Cafe that it has a few other great breakfast options, and ultimately those plus the drinks form the basis of our score here, as the Tonga Toast is pretty much a wash. Request a seat away from the lobby or dine early enough that the lobby isn’t busy and you’re likely to have one of the best breakfasts at Walt Disney World…even if the very best item they serve is “better” downstairs at Captain Cook’s!

Are you a fan of Kona Cafe? What’s your go-to breakfast here: Tonga Toast, Macadamia-Pineapple Pancakes, or something else? Hearing from you is half the fun, so please share your thoughts in the comments!