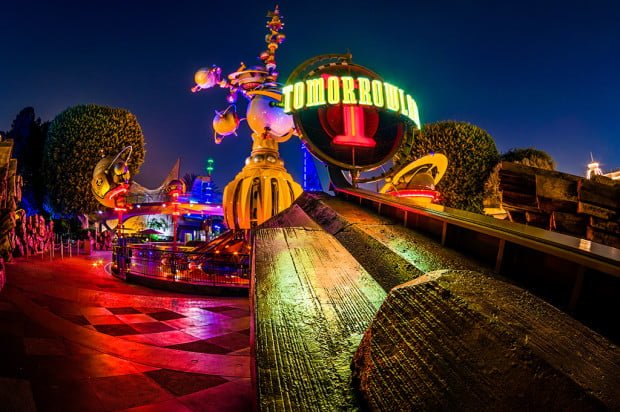 This post covers a couple of things: new Avengers food at Redd Rockett’s Pizza Port in Disneyland, and whether a Marvel attraction is replacing Innoventions next door. Let’s start with the more intriguing subject. That’s right, the food.

I’ll admit that I was pretty hyped when I read an article on the Disney Parks Blog about the Iron Man waffle (yes, you read that correctly–it’s a waffle shaped like Iron Man) on Friday afternoon. I mean, it’s a waffle, shaped like a super hero. That’s something truly special, and I felt the need to consume it ASAP. In actuality, my excitement probably wasn’t so much about the waffle itself as the fact that I now had a pretext to head to Disneyland after finishing work.

I met up with Hawkeye4Life Fan Club Founder Guy Selga, and we each purchased all of the Avengers items at Pizza Port (besides the pricey Iron Man novelty cup). There was much excitement in the air, as the potential of a delicious waffle shaped like a super hero could instantly catapult Redd Rockett’s Pizza Port from being one of the worst restaurants at Disneyland to one of the best restaurants…in the world. I mean, c’mon, it’s a waffle shaped like Iron Man? That’s serious business.

Let’s take a look at whether the waffle and other Avengers foods we assembled lived up to the hype. Oh, and also the minor question of if and when a Marvel attraction is coming to Tomorrowland… 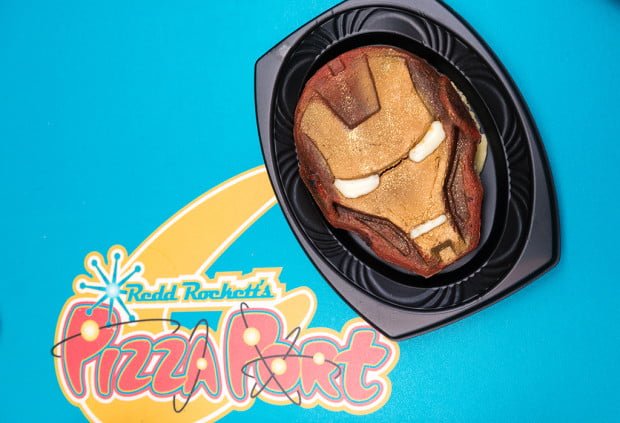 I’m sure you’re all sitting on pins and needles, so I’ll start with the waffle. Calling this a waffle might be a bit of a stretch. It actually has more in common with a warm red velvet cupcake with cream cheese filling than it does a waffle. No matter, it’s wonderful. It’s also $6.99, which is a bit of a steep price for what ultimately is a dessert, but it’s quite large and filling. This is something to split, and the size plus taste plus novelty factor makes it worth the $6.99 investment. 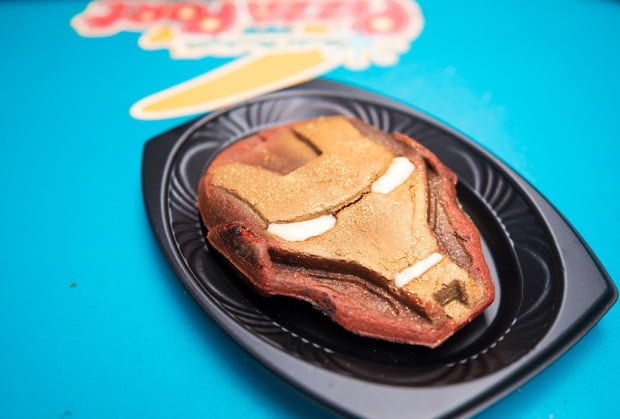 By contrast, nothing else we purchased was remotely worthwhile. The Black Widow Parfait was a rich, odd mix of flavors that was simply overwhelming. The Disney Parks Blog lists this parfait as consisting of “layers of chocolate syrup, chocolate cake, white and dark chocolate mousse, strawberry filling, and topped with dark chocolate crunchy candies and Black Widow’s emblem.” 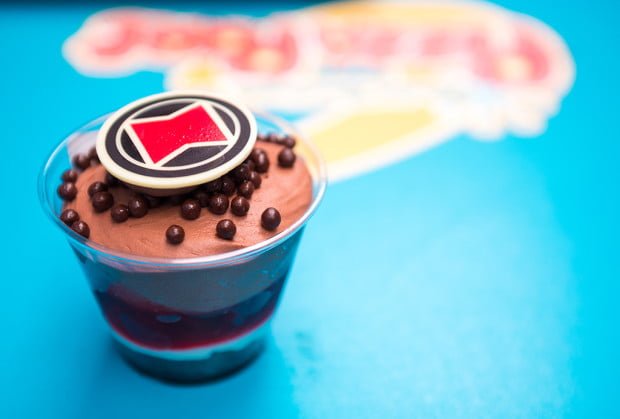 That sounds like a lot of stuff going on, but the actual list of ingredients in the parfait is about as long as a Russian novel, and this label-list covers about half the parfait container. I would have been able to tolerate all these artificial flavors, chemicals, and what-have-you had the parfait been delicious, but it was not. Definitely not something that I recommend. 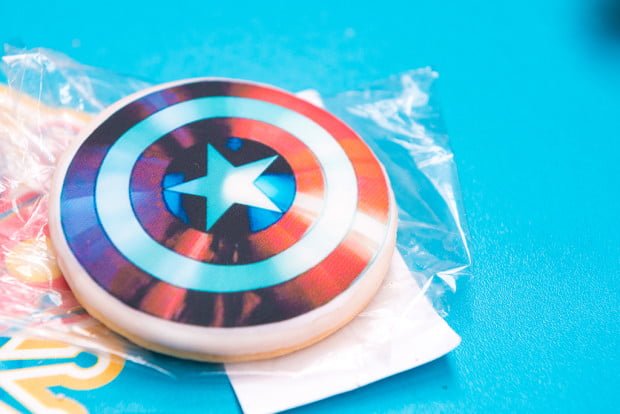 Then, there’s the Captain America Shortbread Cookie. This wasn’t listed in the Parks Blog article, and probably for good reason. It was one of the blandest cookies I’ve ever tasted, being comparable in flavor to cardboard with a hint of shortbread flavor. 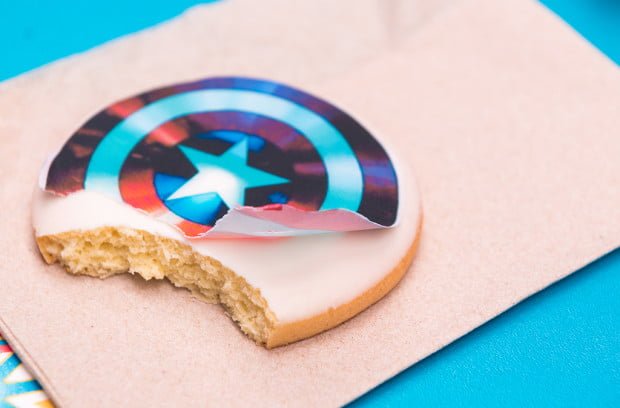 I’m pretty sure the Captain America shield on this cookie was made of paper. Literally, paper. It tore oddly as it was bitten into, and I tried a piece of it on its own, and it was akin to restroom paper towel. At least the cookie wasn’t hard, I guess?

My overall conclusion in terms of these Avengers foods: leave the other stuff, take the Iron Man Mark V Dessert Waffle. 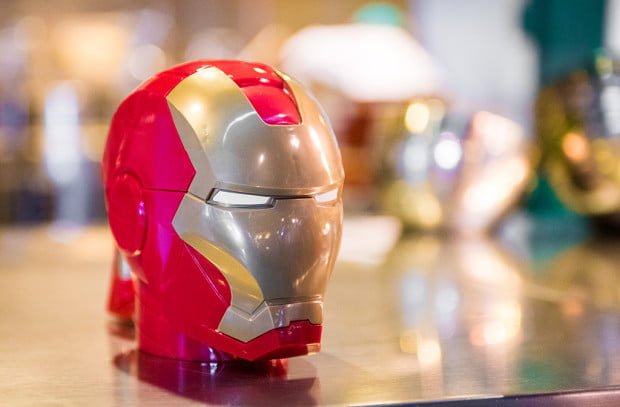 There have been so many rumors about what form this would take over the last few years. Speculation has ranged from an Iron Man roller-coaster and mini-land in Disney California Adventure to a fully fledged third gate devoted entirely to Marvel. These ideas are plausible, but they are definitely long-term plans, especially in the case of a third gate, which is probably at least a decade away (if not simply wishful thinking by Disneyland fans).

Marvel already has an established presence in terms of meet & greets and displays in the Innoventions building, and the quickest option for a fully-fledged attraction is probably Marvel taking over that building and replacing Innoventions with a Stark Expo or S.H.I.E.L.D. headquarters. Rumors have swirled about these possibilities, as well, but haven’t ever really gone anywhere. 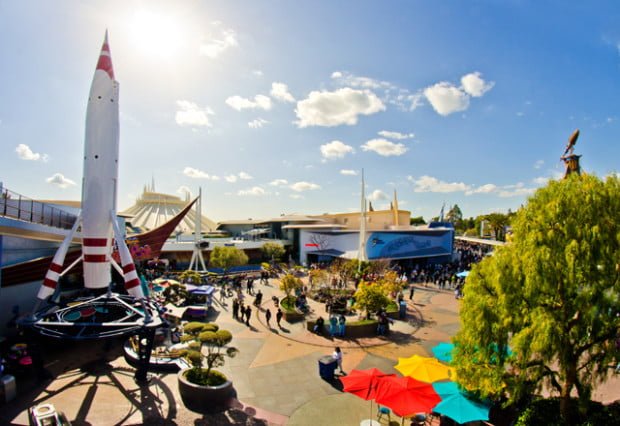 However, Innoventions closed on March 31, 2015 for a refurbishment with no end date set. Any time anything happens with Innoventions, Disneyland fans have speculated as to what the future might hold. Everything from Star Wars to a nostalgic return of the Carousel of Progress has been presented by fans as possibilities. For a while, the most reasonable idea seemed to be an exhibit for Disneyland’s 60th Anniversary showcasing the history of the park. It seemed like a quick project that could be completed in a couple of months for the kickoff of the 60th.

As time goes on, it appears pretty clear that this is not going to be a Disneyland 60th Anniversary exhibit. Even before Innoventions fully closed to the public, it appeared displays were being removed in wholesale, suggesting a complete change in the attraction, not a temporary repurposing of space. More recently–and more telling–exterior walls have been removed from the building, offering glimpses inside that appear as if the building has been gutted. Quite simply, if a 60th Anniversary exhibit were opening in a few weeks, the building would not look like this now.

Of the possibilities that remain, Star Wars and Marvel seem like the most reasonable options (sorry, Carousel of Progress). In my view, Star Wars seems destined for bigger and better things via full scale environments a la Cars Land, whereas a Marvel attraction could repurpose the existing building there and not seem unambitious. 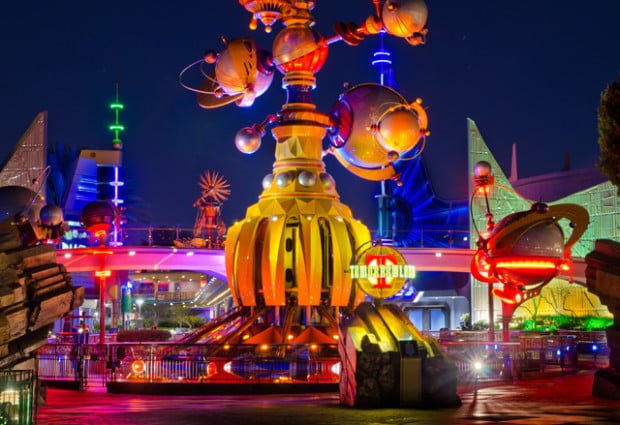 As Avengers: Age of Ultron races to a $200 million opening weekend and Star Wars Episode VII being forecast to earn $2 billion+ at the box office, neither ‘cinematic universe’ going anywhere anytime soon. Given this, one thing is for sure, and it’s that Disney will want to find a way to leverage these colossal properties in its parks, sooner rather than later. It’s actually quite shocking that Disney has yet to make any concrete announcements about Marvel or Star Wars in the parks by now…it’s not as if the popularity of these films is some sudden surprise. It just makes sense for Marvel to make a permanent home in Innoventions as the quickest way to make that a reality.

What the future holds for Marvel at Disneyland is still anyone’s guess. It appears a foregone conclusion that the future does hold something, it’s just a question now of what, where, and when? Personally, my money is on something in the Innoventions building, and that “something” not simply being simple exhibits. While I’m not overly enthused about the prospect of a Marvel land (or a Star Wars one, for that matter) in Walt Disney’s original magic kingdom, I think a single attraction or two would be a good, workable fit. Hopefully we will find out for sure what’s coming at this year’s D23 Expo! 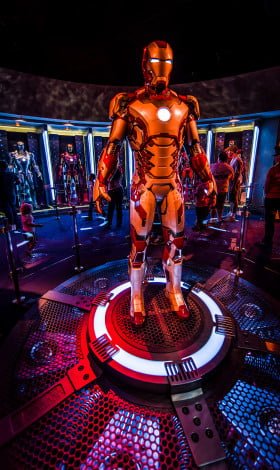 Oh, and one final thing: Marvel is not coming to Walt Disney World. No amount of wishful thinking and concocted rumors is going to change the contractual language between Marvel and Universal. It simply is not happening (save for perhaps some characters outside the scope of that agreement–but the main, Avengers characters are encompassed by that contract). This isn’t necessarily a bad thing, as there are plenty of great, non-Marvel concepts for Walt Disney World.

What do you think about Marvel having a larger presence in Disneyland? Do you think it’s acceptable in Walt Disney’s original magic kingdom, or should it be across the Esplanade in Disney California Adventure? Any particular type of attraction you’d like to see? What about the Iron Man Waffle? Are you super hype for it? Share whatever you’re thinking in the comments!