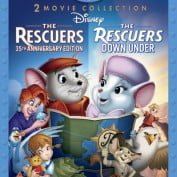 The Rescuers and Rescuers Down Under 35th Anniversary Blu-ray is the latest 3-Disc Blu-ray and DVD combo pack from Disney. Although one of these films is now 35 years old, the two movies look quite good on Blu-ray. As far as story goes, you’re probably familiar with the story of The Rescuers films by now.
Read More 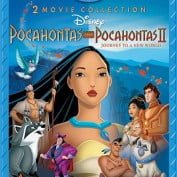 Pocahontas and Pocahontas II is one of the latest 2-movie Blu-ray sets from Disney. Unfortunately, unlike The Rescuers 2-movie pack, only one of the movies here is worth watching. Of course, that movie is the original Pocahontas, which was released at the tail end of the Disney Animation Renaissance, and doesn’t receive nearly the fanfare
Read More 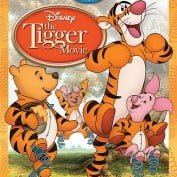 The Tigger Movie is one of the 2000s era Disney animated films that didn’t really resonate with audiences as well as the 1990s era films, and for good reason: it’s simply not as memorable or endearing, nor are the story or character development all that good. This is not to say it’s a bad film.
Read More 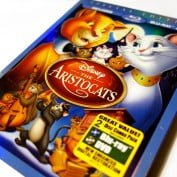 The Aristocats Blu-ray is the latest 2-Disc Blu-ray and DVD combo pack from Disney. As you will read in our Aristocats Blu-ray review, Disney has done well with The Aristocats, giving it true “Special Edition” treatment with a new enhanced digital restoration. More on that later. Given that The Aristocats was originally released in 1970,
Read More
Poster Art of the Disney Parks by Daniel Handke and Vanessa Hunt is the latest beautifully crafted over-sized coffee table book from Walt Disney Imagineering that lifts the curtain on an aspect of the creative group responsible for the development and design (among other things) of the Disney theme parks. Rather than creating another title
Read More 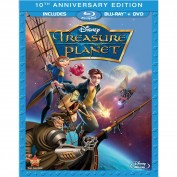 Treasure Planet was a flop at the box office, making less than $40 million in the United States despite a budget of over $140 million. Worldwide, it didn’t recoup that budget, let alone its marketing budget. Despite this, many claimed that it was a good film. It hasn’t developed anything close to a cult following,
Read More 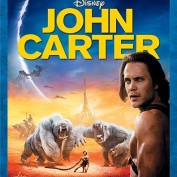 Disney’s John Carter (of Mars) is coming to Blu-ray on June 5, 2012, and in celebration of the release of this very underrated film, we’re giving away a copy to one lucky reader of DisneyTouristBlog.com, courtesy of Disney! If you don’t like free things, you can always pre-order a copy of John Carter on Blu-ray
Read More
“I just want a period film about a period I don’t know anything about. I want it to feel like we’ve just done our martian history research really, really well.” Director Andrew Stanton made this comment in the audio commentary to the John Carter Blu-ray, and it perfectly sums up why John Carter succeeds for
Read More 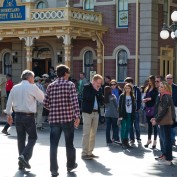 I hope you all had a chance to watch Modern Family’s Disneyland episode last night. While Sarah and I watched all three days of filming in February and March, we couldn’t find ourselves in the background of any scenes. I guess there goes our chance at becoming overnight celebrity sensations! (And I’ll never get those
Read More
The Muppets Wocka Wocka Value Pack (Three-Disc Blu-ray/DVD/Digital Copy + Soundtrack Download Card) might be the most highly anticipated Blu-ray of the year for many reading this. This site is read mostly by Disney theme park fans, and many (most?) Disney theme park fans are also huge Muppets fans. I number myself among such dual
Read More
Disney’s The Muppets is coming to Blu-ray on March 20, 2012, and in celebration of this glorious occasion, we’re giving away a copy to one lucky reader of DisneyTouristBlog.com, courtesy of Walt Disney Studios Home Entertainment! If you don’t like free things, you can always pre-order a copy of The Muppets (Three-Disc Blu-ray/DVD/Digital Copy +
Read More