This spoiler-free review of Disney-Pixar’s Inside Out might as well be subtitled, “How Pixar Got Its Groove Back.” That, of course, assumes that Pixar lost its groove in the first place. To this extent, a brief summary of Pixar’s recent history is probably in order. From the time it released Toy Story until a decade
Read More
Marc Davis: Walt Disney’s Renaissance Man is a new coffee table book concerning the legendary Imagineer who created memorable characters in the theme parks and in Disney animated classics. As is implied from the title of the book calling him a renaissance man, Marc Davis had a long and varied career with Disney. He created
Read More 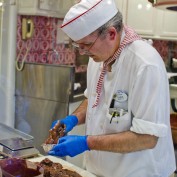 Disneyland’s ‘Holiday Time at Disneyland’ is a guided tour featuring holiday history, and more. This post covers our review of the tour, pros & cons of doing it, photos from the tour, and more. In addition to a tour covering the history of Christmas at Disneyland and various holiday customs, guests receive: priority boarding on
Read More
I hadn’t planned on doing a blog post about the 4-disc Tokyo Disney Resort “The Best” Blu-ray Collection (also available on DVD) I purchased when we were in Japan, but enough of you asked about it that I decided to include it in the vote for “Wildcard Wednesday,” and sure enough, it won. The name
Read More

Disney Infinity is a free roaming, toy-based video game that allows players to explore the Disney universe with their favorite characters. This review of Disney Infinity covers the Starter Pack, which is available for the Wii, PS3, Xbox 360, Nintendo 3DS, and Wii U. The starter pack costs $75, with additional character toys, power discs,
Read More
The Muppet Movie “The Original Classic” – Nearly 35th Anniversary Edition (Blu-ray + Digital Copy) comes out right as Muppet Fever is heating up again (did it ever cool down?) as audiences anxiously await next year’s Muppets Most Wanted (after seeing an extended sequence from the upcoming film at the 2013 Disney D23 Expo, my
Read More
Going into it, I really wanted to hate Disney’s Planes. It’s a DisneyToon Studios release of a film set in the “Pixar Universe,” and it was clearly pitched as a way to sell merchandise. It was originally a direct-to-video title that was bumped to a theater release (I assumed) as a way to sell even
Read More

Dream It! Do It! My Half Century Creating Disney’s Magic Kingdoms is Walt Disney Imagineer Marty Sklar’s autobiography detailing his 50-some years working with Walt Disney, and being a part of every single Disney theme park that opened after Disneyland. His resume alone should make buying this book a no-brainer for most Disney fans, but
Read More
Disney’s 2013 summer blockbuster, The Lone Ranger, tries to be a lot of things and fails at each and every one of them. It’s not a serious Western. It’s not a mindless action movie. It’s not a spoof. It’s not a comedy. The best way to describe it is as a bloated Pirates of the
Read More
The Emporer’s New Groove and its sequel, Kronk’s New Groove are now out in a 3-disc special edition Blu-ray and DVD set, and this review will give you an idea of whether they’re worth buying! Before we get there, though, you should know a little more about The Emperor’s New Groove that might make the
Read More